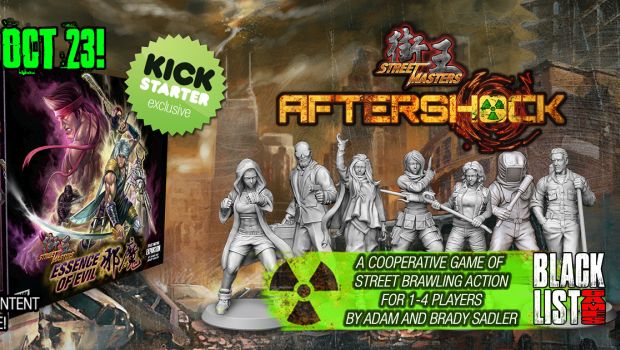 When you look at fighting games, it seems like a lot of the tabletop ones are one-on-one brawls.  While some dungeon crawlers have melee combat, it doesn’t have the feel of a beat em up like Final Fight.  When I heard about Street Masters, I was intrigued by the fact that they were trying to get the feel of an all-out fight.  I was even more impressed that they were so successful they were doing an expansion called Street Masters Aftershock.  I had the opportunity to ask designers Adam and Brady Sadler about their methods.

Which beat em up games do you take inspiration from for Street Masters?

Brady: For me, I immediately wanted to create a tabletop version of a video game I always wanted—a beat ‘em up game like Double Dragon or Final Fight with a huge cast of fighters similar to those found in arcade fighters like Street Fighter or Mortal Kombat, where each fighter had their own fighting style. So I’d have to say both beat ‘em up games and arcade fighter games.

Adam: I would completely agree with Double Dragon as a big influence, but also several other arcade games we played from X-Men to TMNT to Knights of the Round. We played so many beat ‘em games back in the day that they all played a part in our creation of Street Masters.

The beat em up genre seems out of the wheelhouse of your other games. Why did you decide to design Street Masters?

Brady: We are typically commissioned to design certain games for publishers. Blacklist actually approached us and let us essentially decide what we wanted to design, only giving us “video game fighting” as a concept. We immediately turned to our childhood, when we spent MANY hours playing co-op fighting games on consoles. So it was an easy choice to bring one of our favorite childhood hobbies to our adult hobby.

How do you keep the gameplay in Street Masters feel fast while still having some strategy to the combat?

Brady: We honestly weren’t as focused on speed for gameplay, because we feel like video games totally have this covered. We don’t seek to directly port a video game experience to the tabletop, because we feel these are completely different experiences. So we wanted to bring something “new” to the beat ‘em up video game genre with strategic, card-driven gameplay. Giving each fighter a unique deck tailored to their fighting style, we are able to add a ton of depth and variety between the many fighters you can play as in Street Masters.

Adam: However, we did want to focus on speed for setup and tear down. We feel that we really accomplished that goal with Street Masters. It’s so quick to get started playing!

The Aftershock expansion seems to highlight a radioactive symbol. Are we going to see mutants and other aberrations in this expansion?

Brady: Yes! One of the tropes in the beat ‘em up genre that we haven’t explored yet is the nuclear fallout & mutant themes. We are super excited to get to tread this ground in Street Masters now.

How will the missions and showdowns differ from Arcade Mode and Story Mode?

Brady: Mission cards and showdown stories can be added to either Arcade Mode or Story Mode. Missions are meant to add another layer of strategy in multiplayer games, letting players influence their fellow fighters’ turns when when it’s not their turn. Showdowns are a new type of story that are tied to enemy decks. Each enemy showdown contains a story that can be added to any Story Mode or Arcade Mode game, forcing the fighters to content with an inactive boss’ nefarious activities that will earn that boss upgrade cards for their deck. Then the fighters will have to face the upgrade boss in a final, epic showdown! Players can also customize the enemy decks using these upgrade cards to increase the difficulty of the associated enemy deck.

How does the Modular Deck System work for each fighter?

Brady: The MDS allows us to create a wide variety of enemies the fighters can take on in a wide array of stages, each driven by a unique deck.

Adam: Each fighter has their own unique deck that allows them to play completely different from other fighters. This deck contains their own combination of attacks, tactics, and abilities which creates individual strategies unique to that fighter. In addition, different combinations of different fighters can create all kinds of different play experiences. It’s really fun to experiment to find the perfect team of fighters that matches your play style.

How do you keep replayability high when a fighter is using the same deck every game?

Brady: Every single fighter card can serve multiple purposes given any particular situation. The depth of variety really comes out with how you combine decks in a given game.

Adam: Even if a player uses the same combinations of decks over and over, they will still get a different play experience each time. However, even if the player is just using the same fighter deck, they can still take that deck up against any combination of enemy deck and stage deck to create vastly different games and find that fighters strengths and weaknesses.

Were some of these ideas designed with the base game, or have some of these mechanics or fighters been designed after the release of Street Masters and you’ve gotten feedback from the community?

Brady: We’re always designing for this game, and constantly tapping the community for feedback. We have a passion for this game line that just keeps growing, so we will continue to engage with the community to ensure that the game delivers what the fans want.

Adam: The first wave of content was all designed either during or shortly after the base game was designed. However, after the game delivered to backers we were able to get tons of feedback from all kinds of players. While the majority of the feedback we received was positive, we definitely found some ways in which we could improve the game. This feedback was instrumental in allowing us to bring the game up to a whole new level with Aftershock.

Now is a great time to look at Street Masters.  If you look at the Aftershock Kickstarter campaign, you’ll see that you can get everything from the original Street Masters campaign, as well as the Aftershock exclusives.  It looks like a ton of fun with plenty of tropes that fans of the genre will appreciate.