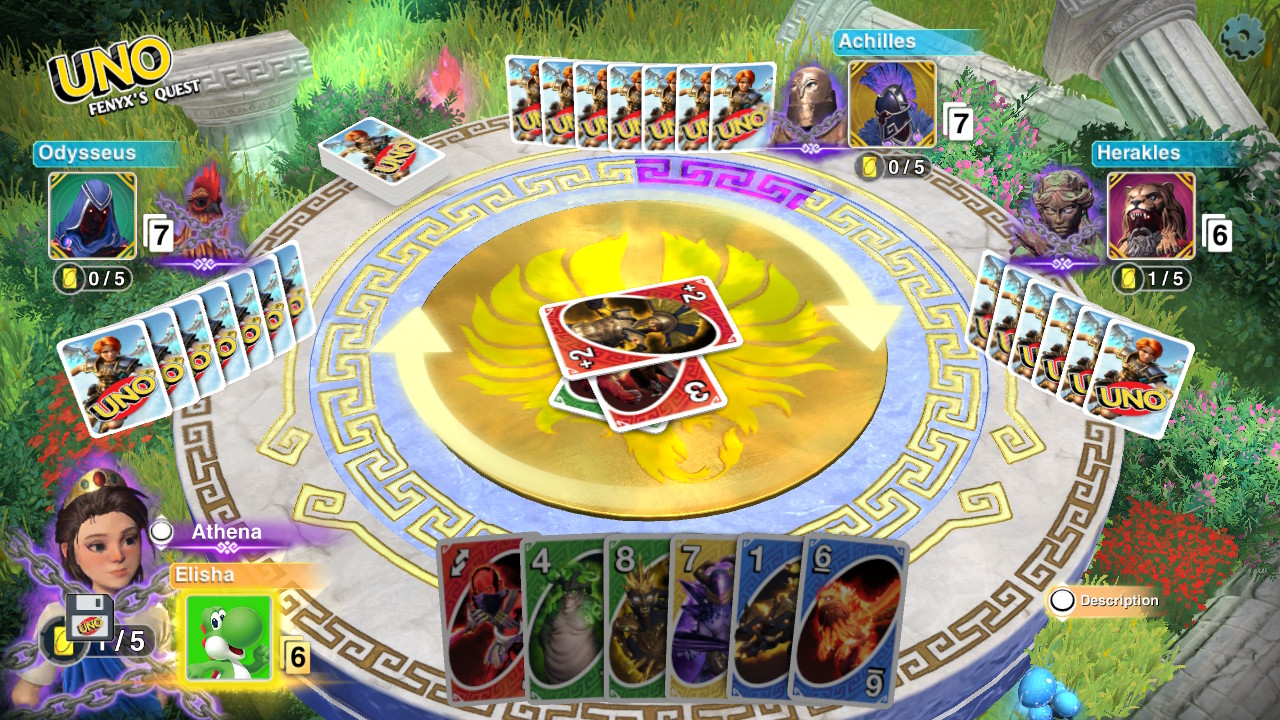 Something you might not know about me: I had soft-banned playing Uno at my house for about a year after finding out the game normally doesn’t end after one round. After someone explained the original rules, and learning that the game could be hilariously fun under the right circumstances, I decided to go all in and pick up some more Uno decks. Due to the pandemic, I unfortunately couldn’t experience the joy of the 2019 expansion, Uno Flip. Thankfully, Uno: Ultimate Edition can give you the frustrating joy of getting three friends together and participating in a modern twist of a relationship-destroying classic. 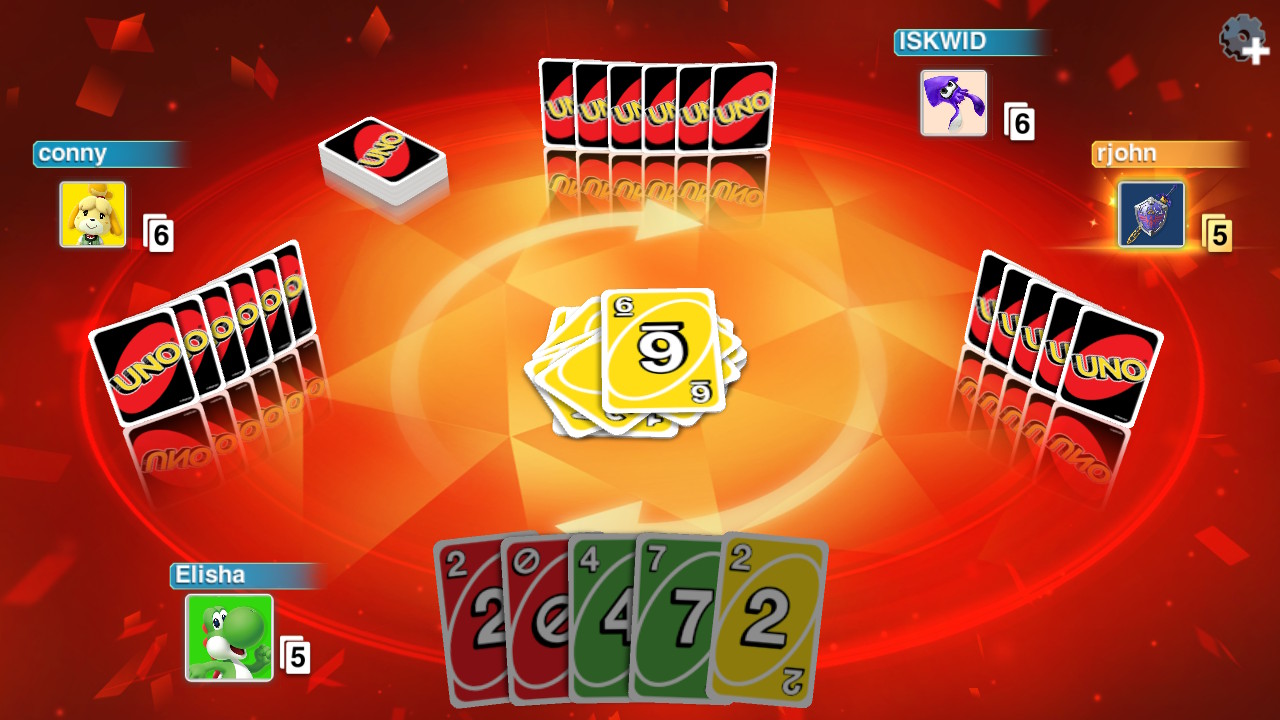 If you want an in-depth review of the current generation Uno experience, Ron’s review tackles the biggest benefits and drawbacks of the Switch version. Thanks to a stream of constant updates, I haven’t seen too many technical issues compared to his experience, so it’s safe to say this version is perhaps the definitive digital adaptation. There’s enough here to pick this over a deck of regular cards, and multiplayer options like co-op as well as the ability to pick house rules is a nice touch. I’m a big fan of having multiplayer games seamlessly continue while in a session, and there’s a ton of quality-of-life features that make this a surprisingly fun version. 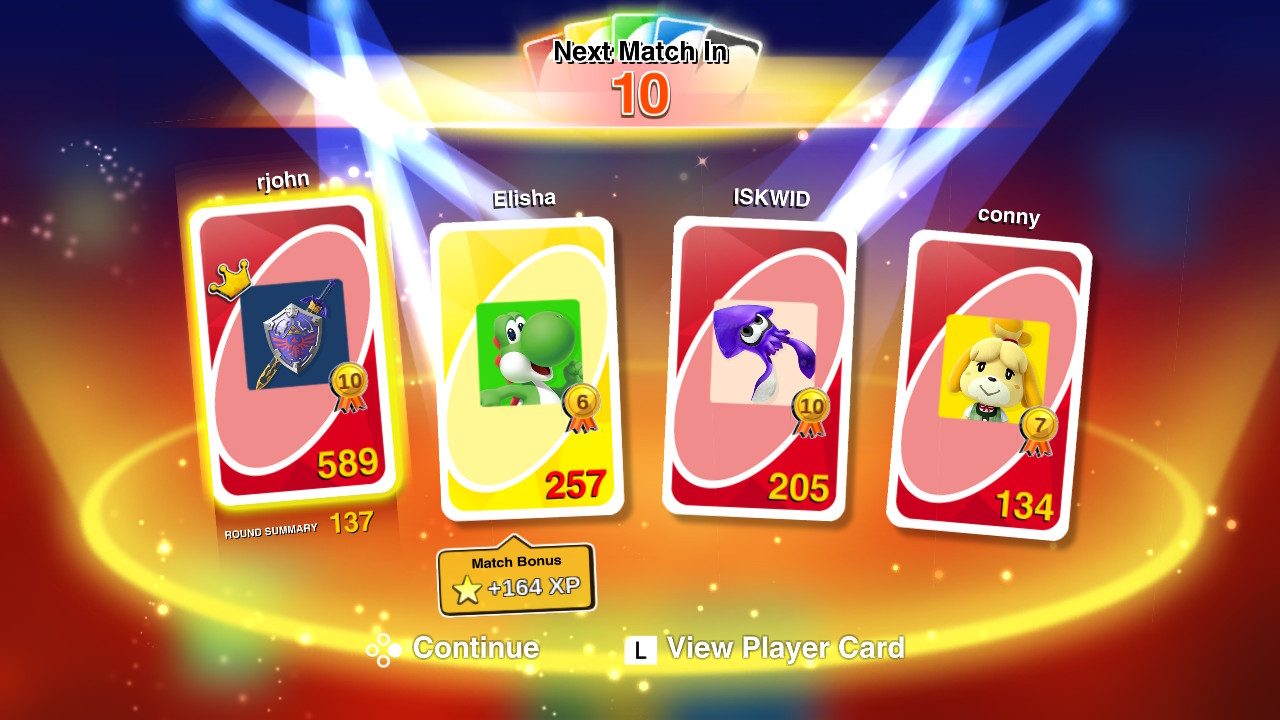 While the Ultimate Edition is generally the same compared to the original release, the biggest addition to the package is that all previously released DLC is included, which also means that you also have Uno Flip and the Fenyx’s Quest decks as well. The meat of this piece is going to revolve around these two additions, since they essentially function as different modes with their specific card mechanics differing much more than the previous decks.

The physical version of Uno Flip was released back in 2019, and I can see why it’s the younger, daring brother of the main game. While its regular penalty cards are a little more forgiving (with draw ones and wild draw twos rather than the draw twos and wild draw fours respectively), therein lies the flip card. If a player happens to play this, the whole deck (and everyone’s hands) flips, which causes some dangerous options to come into play. Draw ones are now draw fives, skips will skip everyone except the player, and wild draw fours? Well, pick a color and watch as your opponent amasses a metric ton of cards trying to get one of the color you selected. It’s a daring rule set that breathes life into an old game. (Hopefully it doesn’t breathe life out of your friends because I’m imagining the fistfights now.) Rounds can last exponentially longer due to the fact that drawing penalties are potentially exponential, and there’s an added layer of strategy in trying to predict the card backings on your opponent’s side. Since you can see what a player has on the opposite light or dark backing, you can theoretically plan ahead, which causes some delightfully devilish predictions for the cunning. 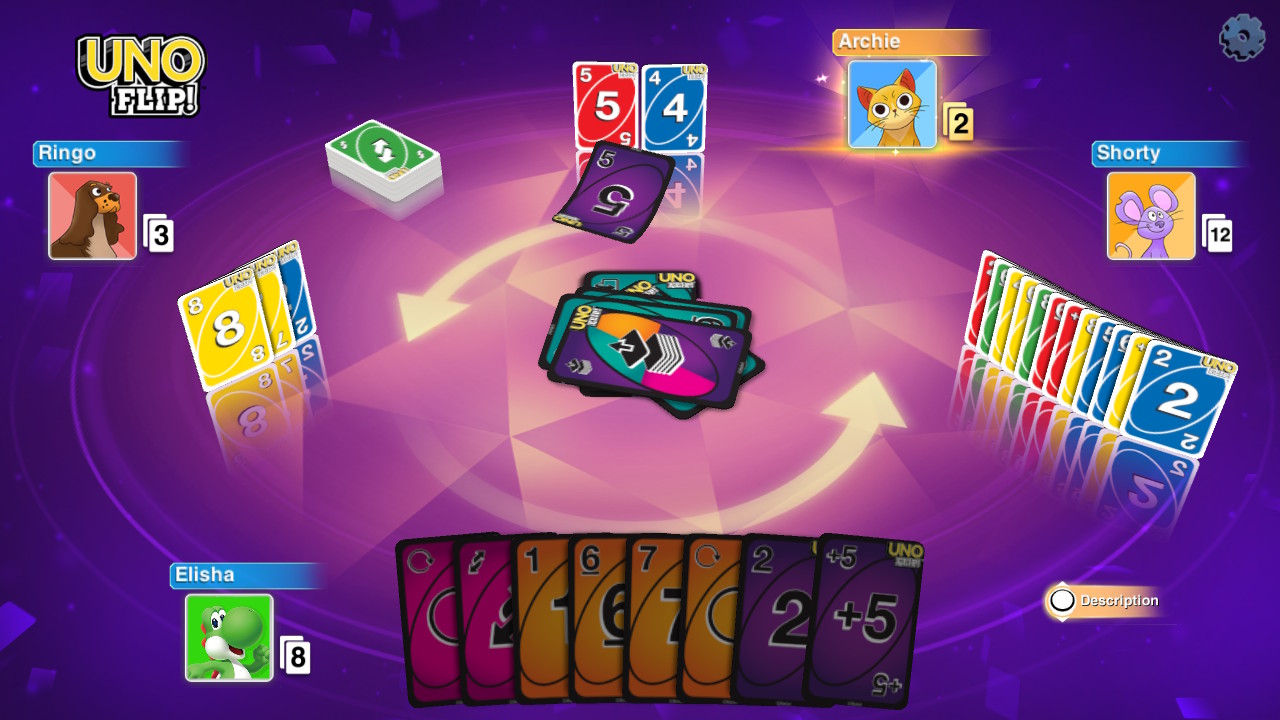 On the other hand, Fenyx’s Quest is based off of Ubisoft’s own Immortals: Fenyx Rising and thematically pulls off its gimmick cards quite well. There are six different action cards, but four of them are given randomly to each player. These cards are based off of the game’s task to free the four gods from Typhon’s curse (Athena, Ares, Aphrodite and Hephaistos), and can only be used once you play five cards from your hand. Once you do, however, the cards awaken and you can pull off some secret techniques that will help whittle down your hand faster. I think the balancing of these cards is a bit broken, since Hephaistos’ effect (with every three cards you play, you can discard all of a selected color from your hand) is pitiful compared to, say, Ares (where every card you play will allow you to discard two more of the same colored card). You can toggle certain god cards in the menu, so it isn’t too unfair. 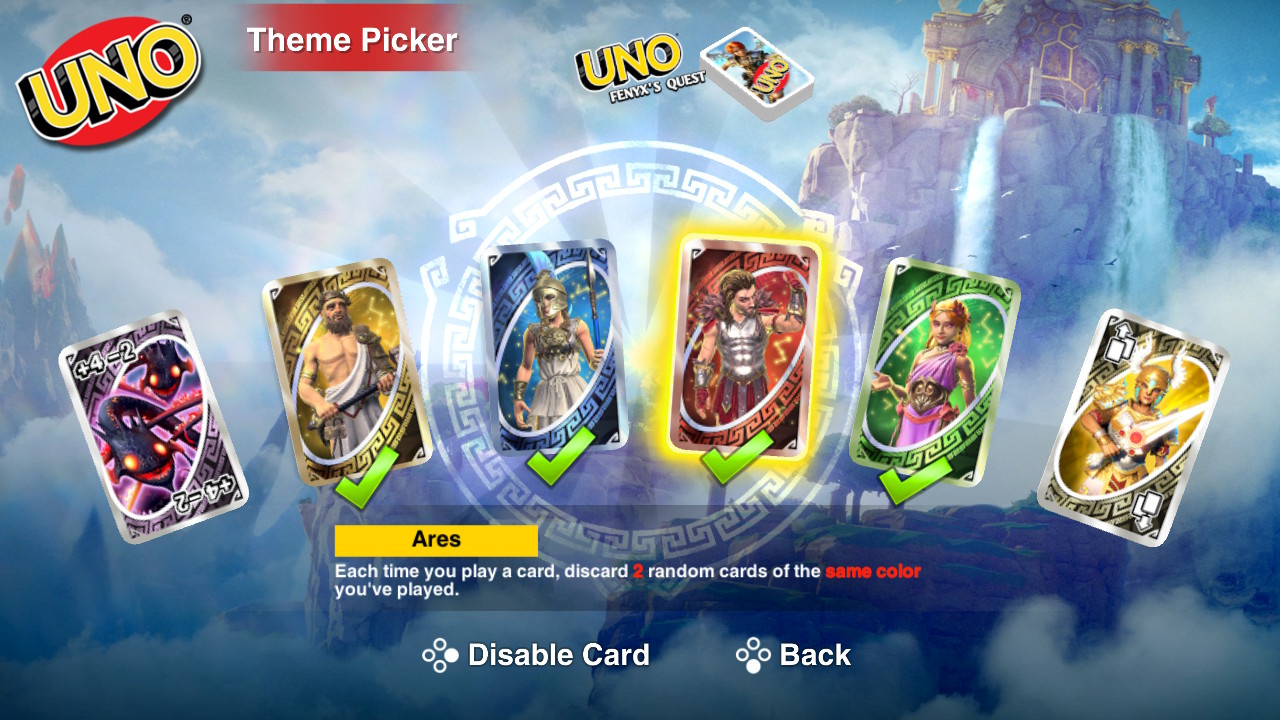 The two cards that are always on in this mode, however, are Tyhpon’s Trick and Fenyx’s Power. Fenyx’s Power acts as a normal “discard two cards” action, while Typhon’s Trick forces another player to draw four cards and then discard two. What’s always present is Typhon’s Curse, where every 12 cards will cause the curse to activate. Players are then given a cursed card which they must get rid of or else they’ll draw another card every time they play one. (Basically, you aren’t winning until you discard that one). The Typhon mechanics are appropriate for the game it’s based on, and it’s a nice way to create tension in an already high-stakes card game. Overall, this DLC deck is a fine addition to the slate of rules, and even comes with some music tracks and voice acting from Immortals: Fenyx Rising! 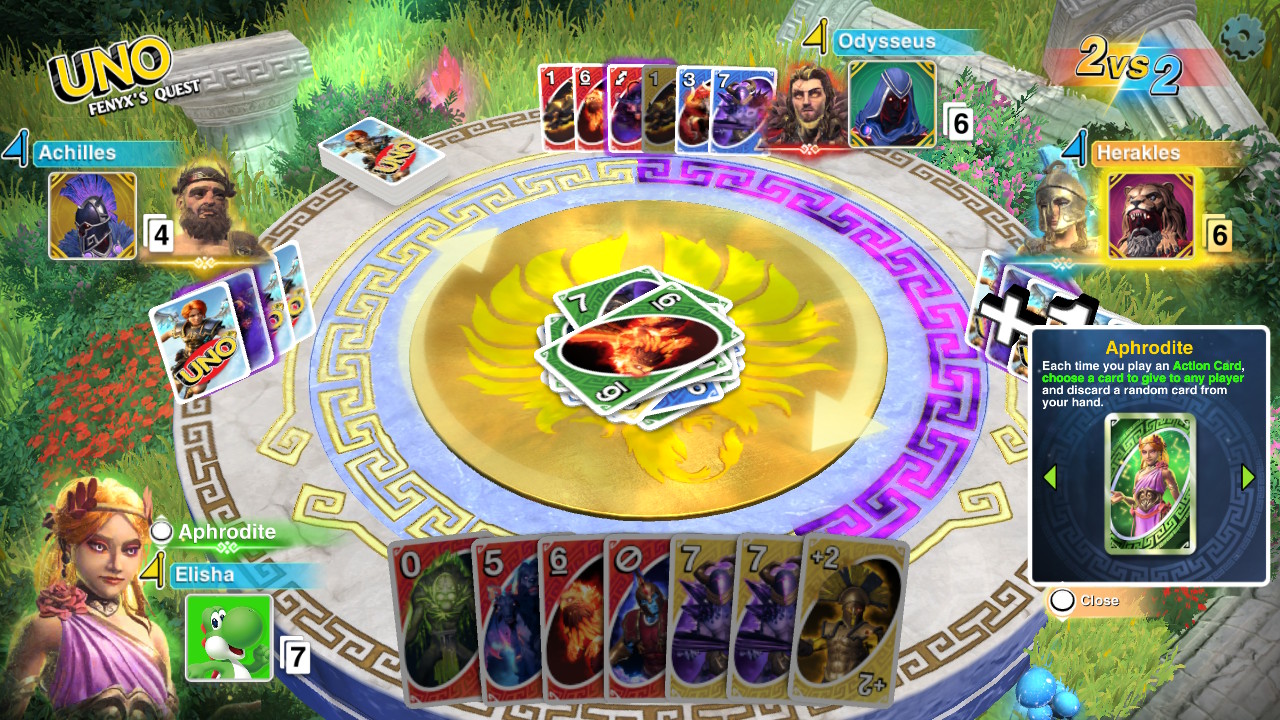 So when all is said and done, should you get Uno: Ultimate Edition? If you haven’t played the current generation adaptation of the game, I’d say go for it! If you already have the base version, then just grab the standalone Fenyx Quest and Uno Flip decks and skip the other themed ones. I guarantee you’re gonna have a wonderful (if not friendship-testing) game night.

Elisha Deogracias is an aspiring accountant by day, freelance writer by night. Before writing for Gaming Trend, he had a small gig on the now defunct Examiner. When not being a third wheel with his best friends on dates or yearning for some closure on Pushing Daisies, he's busy catching up on shonen manga and wacky rhythm games. Mains R.O.B. in Smash. Still doesn't know if he's a kid or a squid.
Related Articles: Uno Ultimate Edition
Share
Tweet
Share
Submit