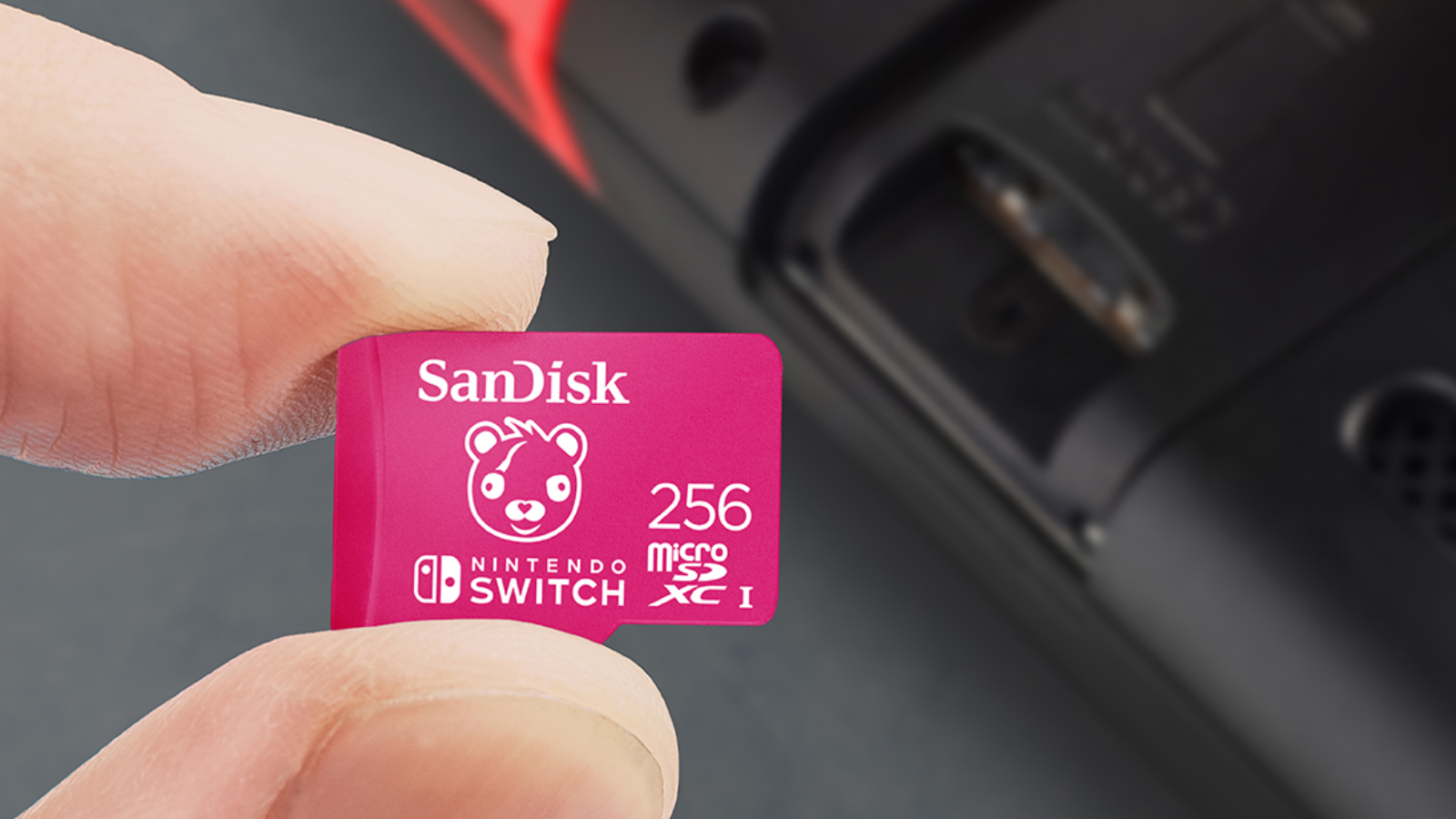 Let’s be very, very honest – Epic’s little game Fortnite was an absolute nothingburger at launch. A stylized shooter with great performance and just ok shooting doesn’t get us out of bed these days. That said, adding the building mechanic as well as converting to a then-new mode called Battle Royale caused the game to absolutely explode. Fast forward to today and the Epic team has pulled in some awesome tie-ins with companies like the NFL, Marvel’s Avengers, John Wick, Stranger Things, Star Wars, Rocket League, Ghostbusters, God of War, Halo, The Walking Dead, Predator, TRON, Avatar, Rick and Morty, Batman, Tomb Raider — this list could go on and on. One thing they’ve not done, however, is endorsed a specific piece of hardware. Well, that changed just recently when the Epic Games team partnered up with Nintendo to create a Fortnite-branded microSDXC card specifically for the Nintendo Switch. I got my hands on one and decided to put it through the benchmark gauntlet instead of just taking a picture, saying “neat”, and calling it a day. When a company like Western Digital delivers a specifically badged drive from their SanDisk line, I wanted to see if it lives up to their usual quality. Let’s get to it.

Like all of my benchmarks, I ran everything you see below at least 3X to ensure that the results are consistent. For frame of reference a microSDXC card is typically rated at a max read of 130MB/s, and while we are at it, let’s break down those letters. Micro means…well, it means that it’s small. In this case, the smallest one you’ll buy as a consumer, being slightly larger than your index fingernail. The four letters after have some specific meanings, so let’s break those down further as they are far from interchangeable. 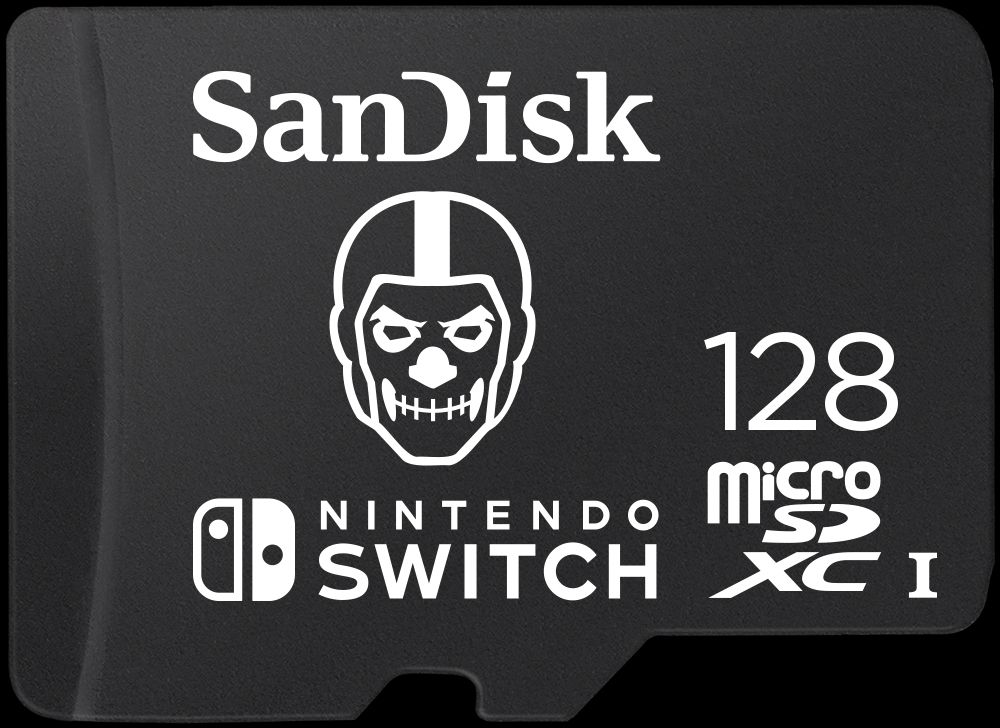 If you have a microSD, microSDHC, microSDXC, or microSDUC card, they will all look the same, but let me assure you they are far from it. A microSD has a capacity that caps out at just 2GB or less. Moving up to microSDHC, with the SD standing for Secure Digital and HC standing for High Capacity, moves that cap up to 32GB. Naturally, we see just how stupid it is to name something “high capacity” or “new technology: – looking at you Windows NT — as it’ll take just a moment before they are already old technology and no longer fast. The microSDHC does precisely that, moving the 2GB bar to 32GB max, which at one point was a lot. The microSDXC is where we are at as consumers today, with the XC standing for “eXtended Capacity”, because EC would have been too hard, I suppose. It supports upwards of 2TB of capacity. The final card type is the microSDUC, with UC standing for…oh come on, now. Apparently it stands for “Ultra Capacity”. Absolutely stupid naming convention aside, these are monster cards, supporting from 2TB to 128TB. Realistically, you would never use anything as large on your portable devices, with the exception possibly being high speed cameras. With the alphabet soup explained, let’s get back to the microSDXC and be happy they didn’t name it “Extreme”.

Laughing at the dumb naming convention aside, it’s important to look at benchmarks, especially when it comes to companies that slap their logo or design on top of a third party device. Here we have the exception to the rule as SanDisk is the manufacturer here. (To catch you up, SanDisk is the subsidiary of storage giant Western Digital that handles many of their portable storage platforms.) This means we should be receiving the same top-tier card that we would when purchasing a performant card from the company. Still, it’s better to be sure, so we benchmark – let’s get to it. 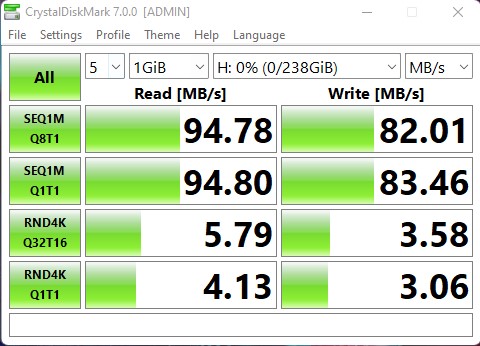 For reference, SanDisk’s own Ultra PLUS 256GB microSDXC UHS-I Memory Card advertises a maximum read speed of around 130MB/s. In our own testing, we find them hitting around the 90 MB/s range on average, with cheaper cards being closer to the 80s. Here we see these cards delivering in that high-end range at 95MB/s read, and 83MB/s write. The write speed is another aspect that can vary wildly, so it’s good to see consistency here. Speaking of consistency, let’s look at my other favorite benchmark utility – ATTO. 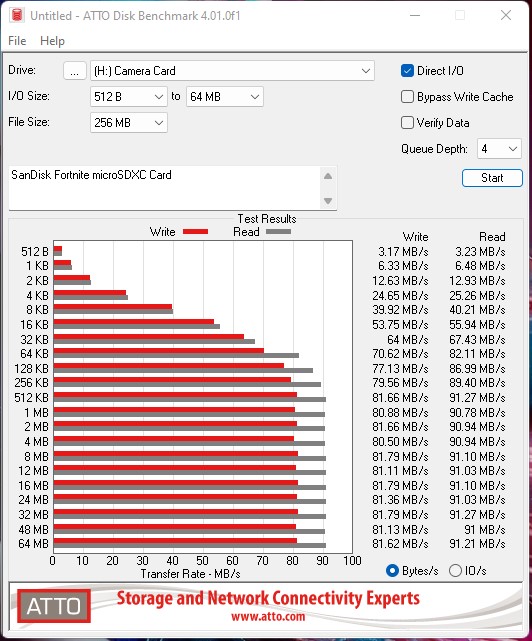 What we see is that there is a progressive ramp for both read and write that is remarkably consistent throughout the duty cycle, hitting roughly the same high watermarks that we saw in CrystalDiskmark.

In this case, there are two different versions of this card – a black one and one in bright pink. The black card at the 128GB capacity, and the pink doubles that for 256GB of storage space. Most Nintendo Switch games are relatively small, with the largest of them being NBA 2K21 at 39.4GB. The size-bloated NBA series aside, most games are in the 8-15GB range, meaning you could hold roughly 8-10 games on the black card, and obviously double that on the larger card. That makes these perfect for the likes of the Nintendo Switch. 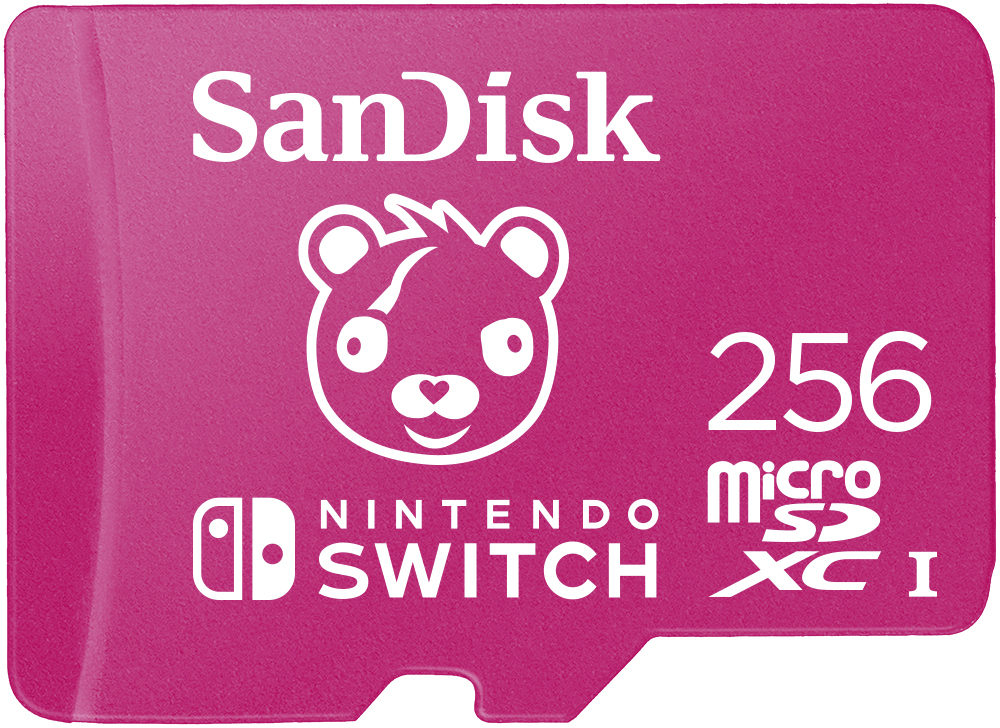 The black card and pink card, as you can see below, are patterned after the Skull Trooper, and the Cuddle Team Leader. Rare outfits in their own right, the team wanted to deliver not only great storage, but an additional cherry on top. To that end, each one of these cards will also include an “Angular Flow Wrap”. If you are unsure of what that is, it’s an extraordinarily rare wrap that is normally a purchase-only goodie that’ll set you back 500 V-Bucks. The last time this was available in the store rotation was all the way back on September 8th, 2019, all the way back to Chapter 1, Season 10. If you missed it then, now’s your chance.

With highly consistent results on performance, and a thumbs up on the looks department, the only thing left to talk about is price. The aforementioned Ultra PLUS 256GB microSDXC UHS-I Memory Card will set you back $49.99 – the same exact price as the 256GB version of this card. Similarly, the 128GB non-branded card will cost you around $26.99, as will this black Trooper card. It’s great to see additional value without tacking on additional cost (looking at you Nintendo with your $5 upcharge!), so it’s a thumbs up all around.

I’m hesitant to throw a score on all this analysis as there isn’t a huge range of cards to test against for this market. Instead I’ll give my thumbs up seal of approval on the cards themselves. They provide reliable and fast storage for your Nintendo Switch without breaking the bank, they come with the same excellent 5 year warranty, and they’ll look good doing it. Plus, you get a sweet wrap!

Ron Burke is the Editor in Chief for Gaming Trend. Currently living in Fort Worth, Texas, Ron is an old-school gamer who enjoys CRPGs, action/adventure, platformers, music games, and has recently gotten into tabletop gaming. Ron is also a fourth degree black belt, with a Master's rank in Matsumura Seito Shōrin-ryū, Moo Duk Kwan Tang Soo Do, Universal Tang Soo Do Alliance, and International Tang Soo Do Federation. He also holds ranks in several other styles in his search to be a well-rounded fighter. Ron has been married to Gaming Trend Editor, Laura Burke, for 21 years. They have three dogs - Pazuzu (Irish Terrier), Atë, and Calliope (both Australian Kelpie/Pit Bull mixes).
Related Articles: Fortnite SanDisk microSDXC card, Hardware
Share
Tweet
Share
Submit