Virtual reality has evolved a lot over the last decade, and Connect has evolved along with it. Today’s Connect keynote covers a lot of ground, from fitness to social platforms to the future of work. This is what we mean when we say VR is the future of general computing. It will touch so many aspects of our lives.

Gaming was one of the first pillars of VR, and gaming is still what gets a lot of you to put on your Meta Quest 2 headset every day. For some, it’s old favorites like Beat Saber and Walkabout Mini Golf. For others, it’s jaw-dropping new adventures like Moss: Book II,Red Matter 2, and BONELAB, games that redefine what’s possible on a mobile headset.

Last month, BONELAB hit the $1 million mark in less than an hour, setting the record as the fastest-selling app in Meta Quest history—but Stress Level Zero isn’t the only developer seeing success. To date, $1.5 billion has been spent on games and apps in the Meta Quest Store, and roughly one in three titles are making revenue in the millions. Both Zenith: The Last City and Resident Evil 4 made over $1 million in under 24 hours, and Blade & Sorcery: Nomad hit that mark in two days. And The Walking Dead: Saints & Sinners has surpassed $50 million in revenue on Meta Quest alone, nearly double its revenue on all other platforms.

There are plenty more games to come, and today we had the privilege of showing off some of what you’ll be playing in the coming months and years—from the surprise-announcement of Marvel’s Iron Man VR on Meta Quest 2 to updates on Among Us VR and The Walking Dead: Saints & Sinners – Chapter 2: Retribution, a brand-new project from Skydance Interactive, and even…Xbox Cloud Gaming? Believe it. Read on for details, trailers, and more, below.

We’ve been big fans of Marvel’sIron Man VR ever since it launched on PlayStation VR in 2020, and we could not be more excited to reveal that it’s coming to Meta Quest 2 on November 3, courtesy of the talented teams at Camouflaj and Endeavor One, and our partners at Sony Interactive Entertainment and Marvel Entertainment. Take to the skies in Tony Stark’s iconic Iron Man armor. Travel the world and face off against Ghost, a hacker with a dangerous drone army and a mysterious connection to Stark’s past. Packed full of deep-cut references for longtime Marvel fans, this is the closest you can get to inhabiting Iron Man’s armor, short of building your own.

In related news, we announced during Connect that the Camouflaj team recently joined Oculus Studios, as did Twisted Pixel (Wilson’s Heart, Path of the Warrior) and Armature Studio, the team behind Resident Evil 4 on Meta Quest 2. It’ll be a while before we can reveal what they’re working on, but we’re excited to continue working with and supporting these developers as they bring ambitious and forward-thinking games to VR. 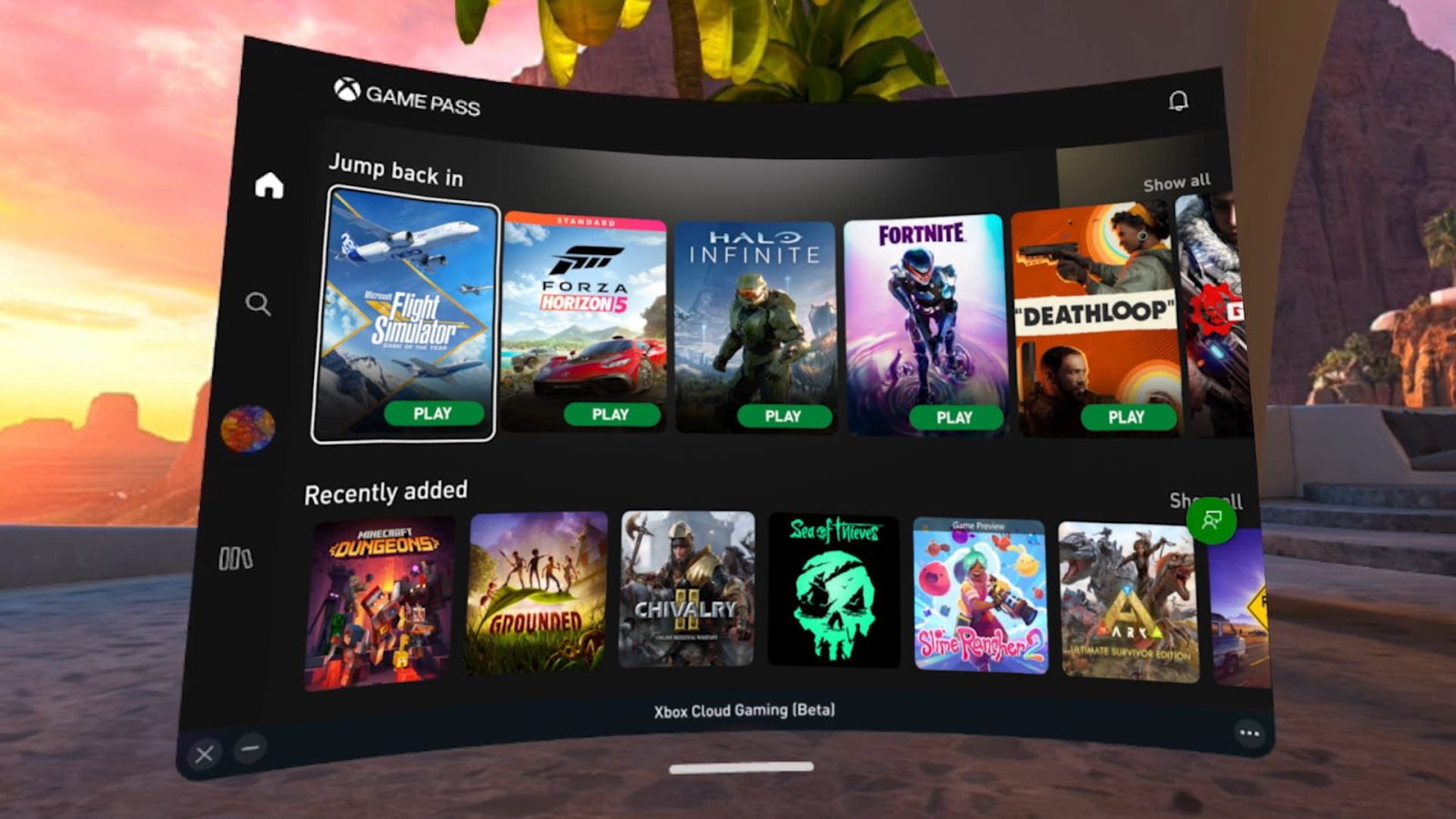 Xbox Cloud Gaming enables you to stream hundreds of high-quality games to a range of devices—and that will include Meta Quest 2 in the future. When Xbox Cloud Gaming launches on the Meta Quest Store, you’ll be able to hook up an Xbox controller to your headset and play console games from the Xbox Game Pass Ultimate library on a massive 2D screen, like having a private movie theater available at all times.

No date yet, but we hope to share more on this as soon as possible. 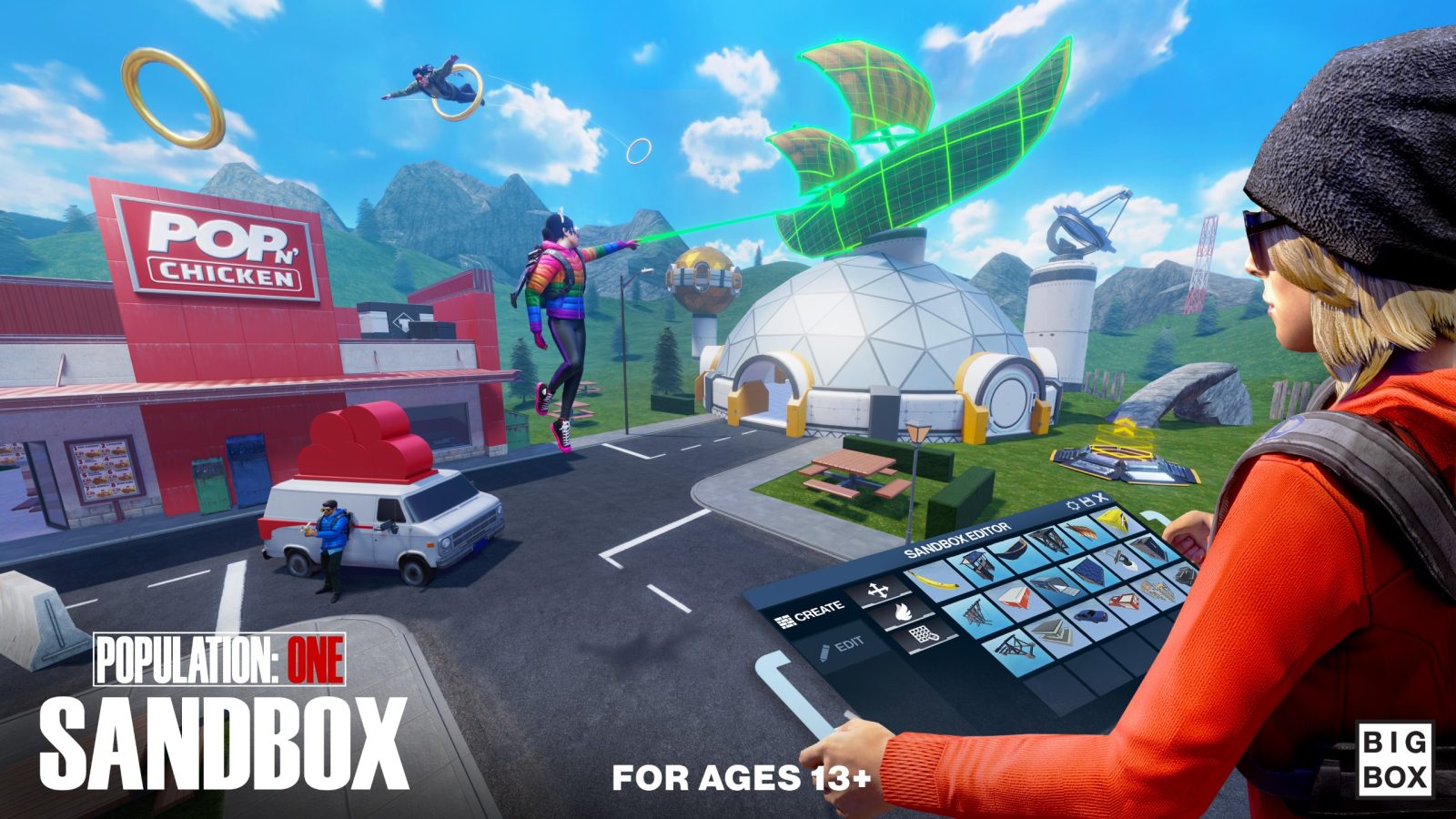 POPULATION: ONE has received regular updates since its initial launch in October 2020, but this December, get ready for tons of open-ended possibilities you can create and share.

BigBox VR will introduce POPULATION: ONE Sandbox, a new UGC game creator where anyone can build, share, and play brand new games. Take the action to a moon base. Lay siege to a Viking village. Fight in zero gravity with nothing but swords. There’s plenty to explore. The possibilities are only limited by your imagination. Not a creator yourself? No worries. Discover and play through new or featured community games with friends and vote for your favorites.

There’s a lot here—it’s the most groundbreaking set of changes since POPULATION: ONE released, and it’s only possible because you’ve made the game such a huge success. Thanks as always for your support!

We know you’ve been waiting for Schell Games, Innersloth, and Robot Teddy to put a date on Among Us VR ever since it was announced at The Game Awards last year. Well, wait no longer: Among Us VR will launch for Meta Quest 2 players 13+ on November 10, and pre-orders are open now.

If you’ve missed the previous trailers, Among Us VR is a reimagined first-person version of InnerSloth’s hit party game. Work together with your Crewmates to keep The Skeld II sailing through space—or betray everyone, claim that you didn’t do it, and hope the crew throws someone else out the airlock. Among Us VR is all the tension and excitement of the original, but built from the ground up for VR.

In the 2D version of the hit social deduction game for PC and consoles, players have a top-down view that lets them see their surroundings as they move through a spaceship, either to complete tasks as one of the Crewmates, or to silently assassinate people as the Impostor. But in Among Us VR, everything happens from the first-person perspective, which makes it a little harder to stay alive or to plan out your kills. It’s a fresh and thrilling take on the Among Us experience, and with players now seeing each other at eye-level with 3D bodies, there’s sure to be some hilarious arguments during those crucial Emergency Meetings.

“It was a fun challenge to balance the wants of an existing fanbase with the needs of players new to the world of Among Us,” says Among Us VR Design Director Michal Ksiazkiewicz. “In both groups, we had to be mindful of another split: People who are new to VR gaming, and those already familiar with it. Thankfully, we quickly confirmed our suspicion that Among Us would thrive in VR, and it’s been a pure joy finding ways to capitalize on it.”

Aside from the new additions, Among Us VR retains all the core mechanics of the original, with online matches that support four to 10 players (note that you can only play with other people who have the VR version). Fans will recognize the layout of the level as well: Step aboard the Skeld II, a brand-new 3D version of the Skeld, one of the most popular maps in Among Us.

“While we rebuilt a well-known map, it plays differently when you don’t have the top-down view and you have to be more aware of your surroundings,” says Senior Producer Jennifer Rabbitt. “As an Impostor, I’ve been caught red-handed by doors opening and someone walking in on me. And as a Crewmate, you want to make sure you’re always looking over your shoulder!”

You can follow Among Us VR on Twitter for more details as we get closer to release. Hope you’re a convincing liar.

At April’s Meta Quest Gaming Showcase, we said that Skydance Interactive’s The Walking Dead: Saints & Sinners – Chapter 2: Retribution would be out by the end of the year. Today we got to narrow that window a bit. Mark your calendars, because you’ll be headed back to walker-infested New Orleans this December.

Your return trip will be more dangerous than ever. Fight, sneak, and scavenge your way through a city that’s already been picked over countless times. Resources will be scarce, but you’ll need to use what you can to fend off not just the ever-present walkers, but the unstoppable Axeman hunting you down.

“The Axeman is someone you will have to contend with and is part of the reason that our game is called Retribution,” says Mark Domowicz, Game Director on Chapter 2: Retribution at Skydance Interactive. “As you may have surmised, you will need to use your brain to figure out how to handle this new level of threat. He is actually a great example of how our gameplay is evolving for Chapter 2. The level of challenge throughout the game has increased in both scale and variety, and we can’t wait to see how our Tourists are going to handle what we are throwing at them.”

You’ll have to continue your journey across the remains of New Orleans as The Tourist by contending with new faces, visiting new places, and gearing up with new weapons for the ultimate showdown over the city’s fate. From new features like exploring the city in the darkness of night to brand-new locations like the French Quarter, this is shaping up to be a bigger and more terrifying experience from top to bottom.

“We always wanted to explore the French Quarter, as it is such an iconic part of New Orleans,” says Domowicz. “We like this new location both for its picturesque appearance but also for its intricate and more urban setting. This allows us to create new environmental challenges for the player as well as give Tourists more options on how to handle a given scenario. The consequences of the Tourist’s actions in the first game have affected and reshaped a lot of the city, and between exploring the night and uncovering more parts of this dangerous city, we think players will have plenty to chew on.”

You saved New Orleans once before, but can you do it again? And save yourself in the process? Find out, soon enough.

The team that designed the brutal combat of The Walking Dead: Saints & Sinners has also been working in secret on a new project. At Connect today, Skydance Interactive revealed the game’s name, Behemoth, and showed off a glimpse of this grim new world. Behemoth is being built from the ground up to showcase everything the studio’s learned about what it means to fight for your very survival in VR.