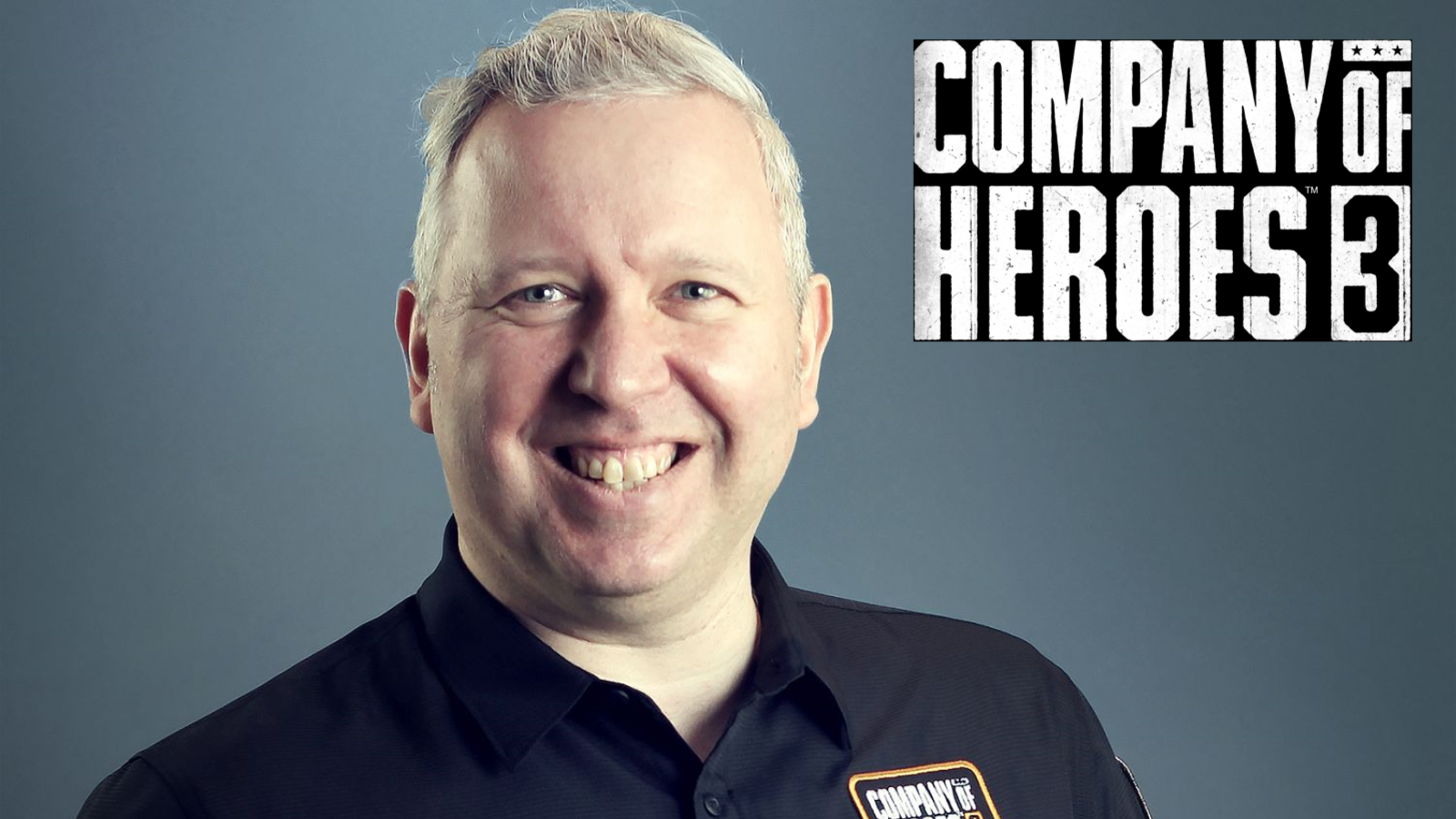 In addition to our hands-on preview with the game, we sat down with Steve Mele, Executive Producer at Relic Entertainment to talk with him about Company of Heroes 3, and what it’s like to work on that upcoming game.  He had a lot of insightful info on game mechanics and the overall process.  Without further ado, let’s get to it!

GT.) First things first — what’s it like working on one of the most recognizable tactical strategy franchises in the world? How’s the team handling the pressure to follow up one of the best RTS titles out there?

SM.) As soon as I joined Relic over 4 years ago, you could feel the legacy of the great games built within its (virtual) halls. As well, the connection we made with key members of our community in the early development demonstrated their passion in a much more tangible way. Some of those community members have joined our Relic team, such as designer Will Ward, and provided invaluable input stemming from their experience as community members. . I feel lucky to be part of a great studio working on a game with incredible history and a passionate audience.

GT.) There are a number of real game changer features in Company of Heroes 3. What do you think is the biggest one, and why is it side armor?
Fun question!

SM.) We have a bunch of great new gameplay features for COH3. I think breach, towing & height gameplay will play heavily into multiplayer meta. Breach because of the risk vs reward factor of entering a building and attempting to flush an enemy out. Towing because it allows players to move large weapons from location to location rather than destroying and rebuilding them over and over. And verticality because it adds a whole new layer of strategy. Each are new and impact gameplay based on the variety of map types we have in the Mediterranean theatre. Side armor is such a fun addition because it adds to the authenticity of experience AND our community worked closely with us to design it. Side armor (as opposed to front or rear armor) opens up new possibilities for flanking strategies and vehicle damage. But the number one game changer will be Tactical Pause. Let’s discuss it below.

GT. ) Joking aside, Tactical Pause seems like a pretty big adjustment. What pushed you to add the ability for players to pause the action? Is it for us old folks who need to consider our next moves instead of doing it on the fly?

SM.) Tactical Pause will allow players to play the game at their speed. It is totally optional but truly a game changer. We know that COH3 is a deep game and that there is so many units to learn in each of our 4 factions. This feature allows players to freeze time in single player matches to take stock of the situation on the battlefield. Players can then line up their next commands to units, get them ready to reposition, or make a difficult decision without as much pressure. I know I use it from time to time when things are going sideways, such as when I’m surrounded, being flanked by enemy units, or approaching a particularly dangerous situation on the battlefield. But I also know I’ve used it less and less once I became more accustomed to my favorite factions.

GT.) You’ve got two types of campaign modes — a dynamic one, and a more traditional linear one. How does that unfold in practice?

SM.) These two single player experiences each offer something different for players. Our North African Operation feels like previous COH campaign experiences with more linear RTS missions and traditional storytelling focused on the impact of war as seen through the eyes of the North African people. The dynamic Italian Campaign is brand new for COH3 and has many ways to approach your goal of liberating Italy from German occupation, with an open-ended map of Italy that adds a larger sense of scale to the action. Do you bombard an airfield with naval artillery first or do you send in your troops to reclaim it before more damage can be done? Do you attack with airborne troops? Where do you land? Do you have the right troops for the job? These are the kinds of questions we want players to be asking as they take in everything Italy has to offer.

GT.) What has constant engagement with the community at large given you? Any big surprises?

SM.) The number one thing that our community has given us is more confidence. When we speak with them, they help shape our direction and align our priorities. There are times where we had to rework things multiple times before we got it right. And then when we get it right, we hear it and it feels great. The RTS HUD is a great example of trying a few things out with our community and finally landing on something that most players agree is a great start. While working on options for the HUD, we received a lot of valuable feedback from numerous points of view. Often feedback points us in a very clear direction however, this exploration had a lot of personal preferences making the path forward less clear.

GT.) I see you’ve got modding tools baked in on Day 1 — what was the primary reason to expose the map and scenario editor, game modes, and tuning packs like that? Are you finding players spend a great deal of time tweaking the engine like that?

SM.) We are making Company of Heroes history! Throughout development, we have spoken with our incredibly passionate and active modding community, and having mod support on Day 1 at launch is a result of those conversations. When the Company of Heroes 3 launches, it will come with the latest that our brand-new Essence Engine 5 has to offer and new capabilities to build more incredible COH experiences than ever before. Players will be able to create: Maps & Scenarios, Game Modes, and Tuning Packs. We are excited to see all the great concepts and experiences the community comes up with.

GT.) You expanded the game just a tiny little bit. 120 playable units instead of 42, a whopping 52 maps instead of 22, and over 40 hours of campaign instead of the 15 COH2 had. This is a HUGE uplift in content — how are you growing this exponentially? Was there something that allowed you to explode the content like this? Was there some major blocker that allowed the team to build to this level?

SM.) This is the biggest Company of Heroes ever! Our fans asked for variety andwe took that and ran with it. We are bringing the series’ intimate, boots-on-the-ground storytelling to two brand-new theatres of war with over 40 hours of action through our replayable dynamic Italian Campaign, and the more linear North African Operation. At launch, we will have four factions – the Deutsches Afrika Korps (DAK), United State Forces (USF), British Forces, and Wehrmacht (German) and 120 playable units.. It’s a large game, so we delayed a few months because we really wanted to polish and hit the expectations that players have for a great COH game. Our team is incredible and worked so passionately to reach this point, and we are excited for you all to play Company of Heroes 3 on February 23rd.

GT.) You’ve got four very distinct factions in COH3 — what would you say are the primary differentiators? How does that play out in practice?

As you spend time with each of the factions, you’ll get a feel for their strengths and weaknesses and when they excel at applying pressure on the enemy or when I should be defensive to not fall behind.For example, ifI play defensive and get to the late-game tanks for the Wehrmacht, I feel pretty confident. The Deutsches Afrika Korps (DAK)feels fast. I can quickly capture resources but may be punished for overreaching. The US Armed Forces cater to an aggressive playstyle rewarding you for capitalizing with combined arms. The British Forces are the best suited for new players and lend themselves to strong defensive playstyles.

GT.) Let’s talk about the destruction engine. Hitting a building with a tank shell does wonderful things to the concrete and mortar. Is this just cosmetic, or does it have gameplay implications?

We are so proud of the work we’ve done on building destruction. We developed a bunch of new tech for our Essence Engine to support both cosmetic and gameplay improvements. The shaders are marvelous at revealing layers of damage as plaster rips away until you see the underlying bricks. And the new physics-based destruction looks amazing and terrifying as chunks of walls break apart and fall to the ground. A cool new gameplay element we’ve added to our destruction is that now occasionally, buildings will collapse and leave a new space where infantry can take up cover within the remaining walls and continue to fight.

GT.) What have you got left to polish up before launch? Not much time between now and February 2023.

With the remaining time, we are laser-focused on polishing, balancing, and fine-tuning Company of Heroes 3 to ensure we meet fan expectations and deliver the deepest tactical experience in COH yet. The main areas are tuning our gameplay experiences to really deliver that grit, fixing bugs, and refining our “first time user experience”. We are also fine-tuning the HUD and UI – something that we think players are really going to love.

GT.) Thanks for taking the time to talk with us — anything else you’d like to share with the Gaming Trend audience?

Company of Heroes is back with an explosive mix of combat, strategy, and tactics! COH3 is the biggest game to date in our franchise and is bringing intimate, boots-on-the-ground storytelling to two brand-new theaters of war through the dynamic Italian Campaign and more-linear North Afrika Operation.  The Mediterranean theatre provides an incredible and diverse backdrop to give players conflicting choices that will impact their strategy. While the North African Operation offers players a more “traditional” and linear COH3 experience – but with no shortage of compelling storytelling and explosive action.

Ron Burke is the Editor in Chief for Gaming Trend. Currently living in Fort Worth, Texas, Ron is an old-school gamer who enjoys CRPGs, action/adventure, platformers, music games, and has recently gotten into tabletop gaming. Ron is also a fourth degree black belt, with a Master's rank in Matsumura Seito Shōrin-ryū, Moo Duk Kwan Tang Soo Do, Universal Tang Soo Do Alliance, and International Tang Soo Do Federation. He also holds ranks in several other styles in his search to be a well-rounded fighter. Ron has been married to Gaming Trend Editor, Laura Burke, for 21 years. They have three dogs - Pazuzu (Irish Terrier), Atë, and Calliope (both Australian Kelpie/Pit Bull mixes).
Related Articles: Company of Heroes 3, Industry
Share
Tweet
Share
Submit