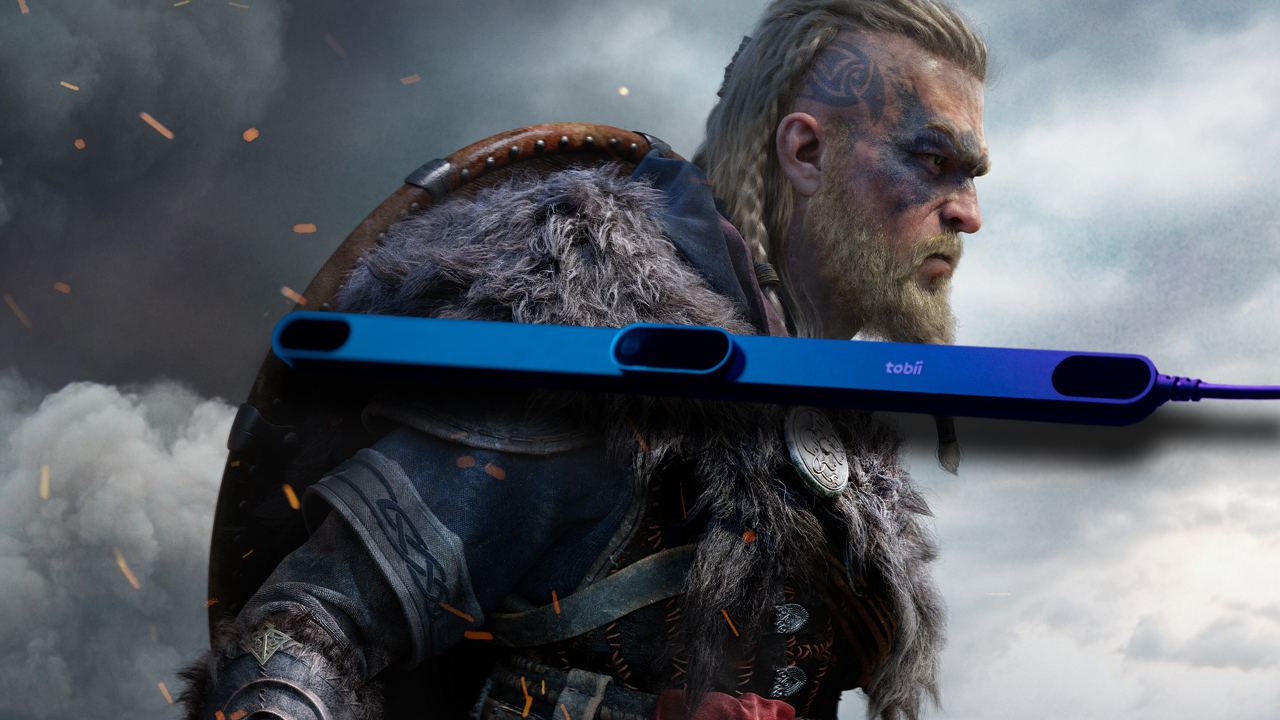 It’s been recently announced that Assassin’s Creed Valhalla is the best selling game Ubisoft has ever released on PC, and you can see in our review that we completely agree that it’s pretty fantastic. Now that the game has finally been released we can also check out the integrated support for the Tobii Eye Tracker 5 (our review of that hardware) to see what new methods of interaction it can offer. Without further ado, let’s dive in and see what’s on offer.

Underneath the options menu in the “3rd Party” tab lies a whopping 10 options for head and eye tracking support for Valhalla. We’ll take a closer look at each one, and showcase a few of them via video so you can see them in motion, but the whole list of items looks like this:

Starting off with Extended View, this setting allows subtle additional camera movement beyond what you get with a mouse or controller, moving the camera to focus on whatever your eyes are locked onto without swinging the camera wildly. This subtle bit of movement is wildly helpful when hunting small critters like rabbits and squirrels.

Where Extended View allows subtle camera movements, Eye vs. Head Responsiveness, Eye vs. Head Traction Ratio, and Extended View Sensitivity settings lets you fine tune it to work precisely as you need it to. While I found the defaults to be well-tuned, the head movement may be more or less than what you prefer, so these options allow you to adjust it in smaller increments until you are happy.

Head Tracker Auto Reset is very useful if you are like me and shift in your seat often, or when you get up for a break and then come back to the action. The Tobii Eye Tracker 5 will recognize that you’ve moved and will automatically recalibrate your head position for the game. If you prefer to have this locked into a specific space, you can toggle this off, but I found it very useful as I’m fairly squirmy.

Aim at Gaze is the heart of the Tobii Eye Tracker’s usefulness. As you are running past multiple targets, interactive objects, and people in the environment, your eyes will flick about the scene and settle on specific items. Aim at Gaze lets the game shift your target accordingly. This is useful in cities where you can spot the odd lootable basket or find a hidden object while running. I’ve put together a quick demo of what this looks like in practice with some notes that show what my head and eyes are doing in each sequence.

When facing off against a number of foes, toggling between foes by simply looking at who you’d like to engage next becomes inordinately helpful. Instead of toggling through foes and possibly missing the critical timing window for a block, you can look at precisely who you need to focus on, allowing you to engage faster. When combined with Lock Target at Gaze, you are ready to handle large swaths of enemies.

Dynamic Light Adaptation and Sun Effects are a love it or leave it pair of options. By looking at differently lit areas of the game, the Tobii Eye Tracker 5 will attempt to let the lighting engine react like it is emulating your eyes. Similarly, Sun Effects will remind you that looking directly at the sun is a very bad idea. These are great interactive elements, but I can see the case for keeping them just as much as disabling them.

I’ve tested Assassin Creed Valhalla on several platforms, and obviously the PC version is going to look the very best (provided you have the hardware) but the freshly-launched hardware is no slouch. That said, there’s an advantage to running the game on the PC and that’s 3rd party support like this. The ability to look around while riding a horse to plan where you’ll go once you hit, or being able to rapidly switch targets by simply shifting my gaze is a very cool addition. Ubisoft and Tobii have been paired up for a long time, and their recently launched titles bear the fruits of that partnership. If you own a Tobii Eye Tracker, or are thinking about getting one, there’s a lot to like here.

The Tobii Eye Tracker 5 is on the market at a price of $229, with either Assassin’s Creed Valhalla or Watch Dogs included for a limited time — perfect for the gamer in your life who “already has everything”.

Ron Burke is the Editor in Chief for Gaming Trend. Currently living in Fort Worth, Texas, Ron is an old-school gamer who enjoys CRPGs, action/adventure, platformers, music games, and has recently gotten into tabletop gaming. Ron is also a fourth degree black belt, with a Master's rank in Matsumura Seito Shōrin-ryū, Moo Duk Kwan Tang Soo Do, Universal Tang Soo Do Alliance, and International Tang Soo Do Federation. He also holds ranks in several other styles in his search to be a well-rounded fighter. Ron has been married to Gaming Trend Editor, Laura Burke, for 21 years. They have three dogs - Pazuzu (Irish Terrier), Atë, and Calliope (both Australian Kelpie/Pit Bull mixes).
Related Articles: Assassin's Creed Valhalla, Hardware
Share
Tweet
Share
Submit