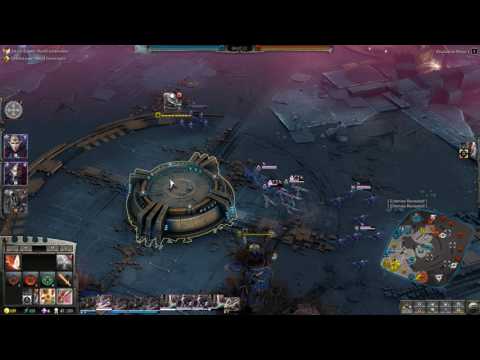 I’m an outspoken Warhammer 40,000 fanatic and the biggest Dawn of War series fan I know. I’m also a fiend for RTS games, and strangely, one of the few RTS enthusiasts here at Gaming Trend. However, one thing I’m not, and never have been, is a fan of multiplayer strategy matches. Campaigns and cooperative play are where it’s at for me. Regardless of my preferences, there was no way I was going to miss out on the Dawn of War III closed beta over this last weekend, even if it was strictly limited to versus multiplayer.

Would I have preferred to have tried out the campaign? Absolutely, I haven’t played it since PAX West 2016. But, I was pleasantly surprised at how much I enjoyed Dawn of War III’s multiplayer. In fact, I may now be a competitive convert.

The beta gameplay was limited to only three maps: a two-player map, a four-player map, and a six-player map. Maps have a series of control points, each of which gives requisition and power, the game’s two basic resources. Look a little closer and you’ll notice that there are also three defined lanes through which most movement and fighting takes place. Your objective is to eliminate your opponent’s core, but not until you’ve destroyed at least one turret, and the turrets aren’t vulnerable until you’ve snuffed out one of the shield generators.

Does that sound reminiscent of another popular multiplayer genre?

The similarities don’t stop there. Players can put three Elites, or lords, on their roster prior to a match. Elites are faction-unique and come with their own distinct sets of abilities. Further variation and playstyle adaption can be made by selecting Elite Doctrines and Army Doctrines. These modifications grant additional active or passive bonuses and skills to your army as a whole, or just for Elites.

Relic has made a deliberate effort to incorporate many aspects of MOBAs, and for good reason. Strategy games, at least in my experience, are not as popular as they once were. An update to the basic formula of base building, resource gathering, and attacking with overwhelming numbers was necessary. No doubt, there will be die-hards out there who are opposed to this change, but Dawn of War III truly excels as an RTS-MOBA hybrid without sacrificing its more traditional strategy DNA, and I’d encourage any naysayers out there to give it a chance.

All three factions are clearly distinct, with obvious strengths and weaknesses, but remarkably well balanced; the same is true of the Elites. Action increases at a comfortable pace as the matches progressed, and dominance often swung back and forth many times before a victor emerged.

However, I did find the tutorials to be a little too shallow. For newcomers and old dirt farmers like myself who aren’t terribly familiar with the mechanics and tactics of MOBAs, a more detailed walkthrough would’ve helped smooth out what felt like a very steep learning curve.

Despite losing and being utterly humiliated repeatedly, I’m convinced that Relic has created some spectacular multiplayer and what could prove to be the sexiest, most stylish, and well-crafted strategy game of the last decade.

“Hope is the first step on the road to disappointment.” —Blood Ravens Librarian, Dawn of War