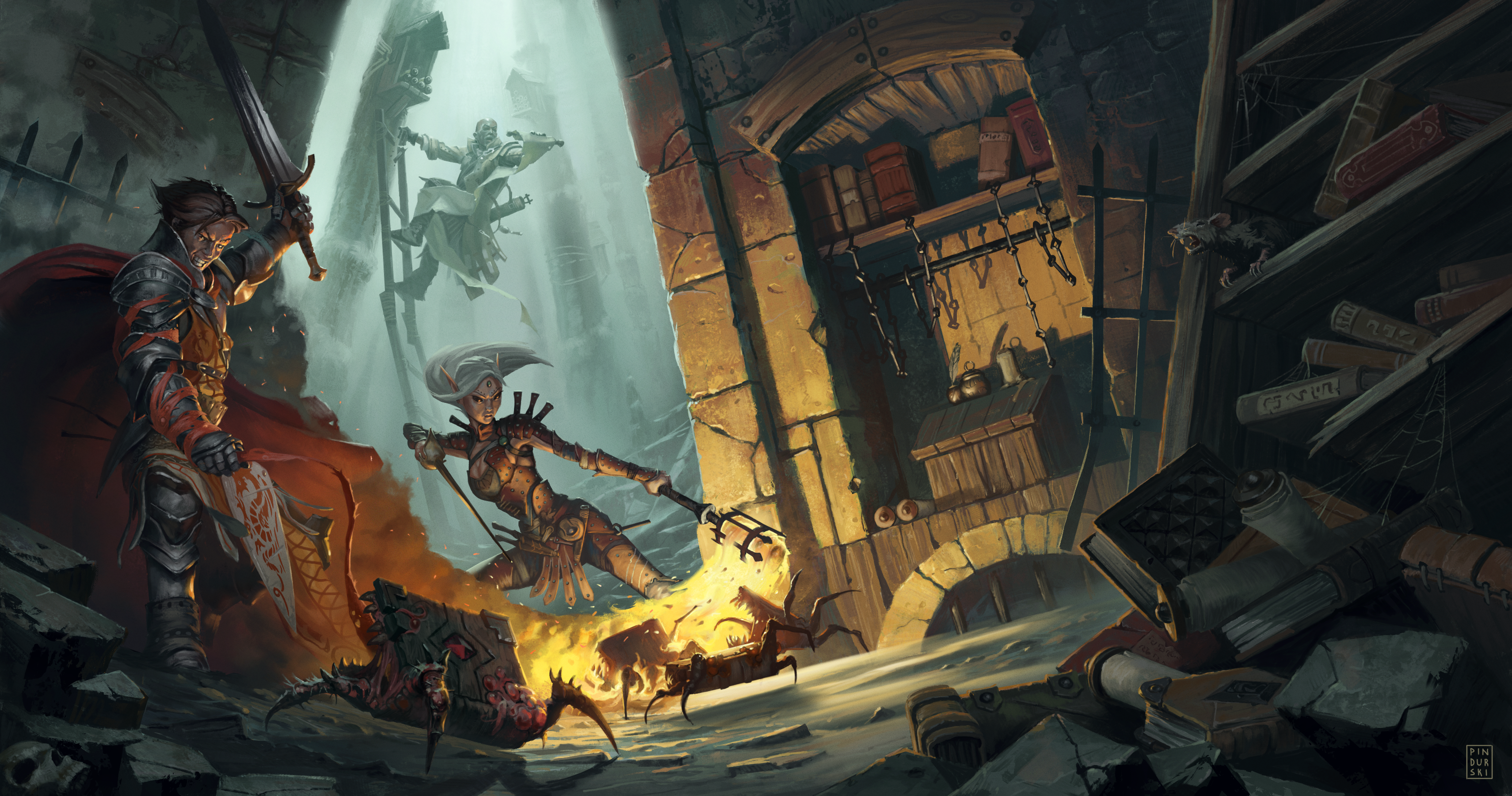 Paizo’s first collaboration with Roll20 comes in the form of Crownfall, the first of six adventures for the War for the Crown adventure path. From my experiences so far, this adventure contains some minor but much needed quality-of-life improvements that signal some good things for Pathfinder fans. Clearly, they have been working hard with the Roll20 team to make this electronic version of the adventure special. Whereas certain modules in the past have adapted mostly by making the maps, tokens, and text electronic, this new format looks to make both the written adventure and Roll20 format succeed better together than they could alone.

Crownfall doesn’t stop at laying the information out for you. Things you usually have to dig or reorganize to find are now right at your fingertips. The adventure starts with a useful overview and there are separate sections set aside for relevant NPCs, pre-generated characters, individual monsters, special rules new to the game, maps, and more. Once you get into the meat of the game, you will be surprised at how easy it is to find specific material such as player handouts. The entirety of Crownfall has been placed in a closeable dropdown, which suggests to me that it will integrate directly into the rest of War for the Crown.

While there is a separate token page, it goes further than what we have seen with the D&D adventure sets, containing premade tokens (and in some cases art) for background NPCs in case you need to put them into the map. If this were perfect, all the NPCs would have art, but I appreciate the teamtaking this effort to help you run your game.

Above, where only the GM can see, are more NPC tokens in case they are needed

Maps have relevant NPCs off to the side in case you need to grab them quickly, saving the time from having to move them from the token page. That shows care and thoughtfulness on behalf of the designer (if you’re reading this, I want to give you some real credit). It’s that kind of move that shows you understand how we play these games, and how annoying it can be do stop for even something as basic as pulling a character token into the game. Crownfall contains all of the maps and monsters you need to jump in, as well as a generous 11 pre-made characters.

The adventure itself also shows a good deal of promise, and hits on one of my personal favorite genres of adventure structure: urban political intrigue. The city of Oppara, capital of Taldor, is on a turning point. An aged and paranoid ruler is soon to pass, leaving no male heir. His daughter, Princess Eutropia, is a capable leader who is nonetheless unable to rule as a woman unless the senate votes to change laws in her favor. Some spoilers will follow for the course of the adventure as a whole, so I would advise caution for anyone looking to experience this as a player.

You will act as servants of a noble house supporting her efforts, swaying senators to her side to stabilize the kingdom around her. There is some buy-in as you are required to support her for the adventure to function, but you have leeway as to your methods and reasoning. The backdrop is effective, but gives you leeway as to how to approach the challenge before you, the perfect concept for a city-based sandbox. Each senator has different goals, motives, and personalities, and it will be up to you to earn their votes, if not their trust.

The adventure’s structure takes a serious focus on social roleplay, kicking off with a set of events that gives players the opportunity to insinuate themselves in high society. Every once in a while, these decisions will be interrupted by small combats, which seem like a concession to the more aggressively minded players.

It’s unclear how much of the city you will end up seeing in War for the Crown, but there is enough fodder here to harvest for multiple urban campaigns

Rest assured, this is no Kingmaker. Your player’s allegiance is meant to be secret, and the power they amass is not their own. Their methods are meant to be subtle and deliberate, i.e. the exact opposite of how most Pathfinder parties operate. It’s a departure for sure, but a welcome one.

This setup was exciting, and a real departure from Paizo’s typical formula. I wish this took up more of the adventure, because this makes up only part one, and you soon find that the actions of the players don’t actually dictate the course of the adventure. It assumes the vote goes a certain way and proceeds from there, so if events tend in the other direction, it will take some quick improvisation to get everyone to the next step. In fact (and MAJOR spoilers follow this warning), most of the characters your players have come to know and rely on get slaughtered in front of them to start act two. After spending time getting to know these people and influence their opinions, it is a shame so much gets tossed away in one cinematic moment. (End spoilers.)

Eventually (and perhaps predictably) things go wrong and the players delve into a dungeon the party must escape. Luckily, this dungeon is a creatively unusual location fraught with mind-bending puzzles. I won’t ruin the surprises of the Forgotten Archives, but suffice it to say I am using them again regardless of if I run this adventure a second time.

It’s rare to see a dungeon feel like such a living place, rather than a set of rooms dropped next to one another

What follows is another section that gives players a basic goal with multiple avenues of approach. Their patron is being locked down in hiding from assassins, who stand between the players and her. To surmount this obstacle, they can rely on stealth, persuasion, a direct though dangerous assault, or even call in favors from nobles they already know.

When they rescue her, they uncover a plot that kicks off the War for the Crown, a battle for succession that will soon engulf all of Taldor. Said war will make up the rest of the adventure path.

This adventure makes for a solid start to the War for the Crown, and has some ups and downs along the way. I appreciate the options for social maneuvering and intrigue, but wish the adventure were more willing to commit to these concepts. The dungeon portions are genuinely fun and interesting, and well integrated into the adventure as a whole. However, the premise rests on some assumptions about your motivations and successes that could prove problematic. Most notably, I take issue with the fact that you begin by engaging in complex social roleplay, only for the NPCs to be murdered with no way for you to help them, after which you are teleported (via objects you didn’t know had the ability) into a dungeon. Each of those pieces are high quality, but I find it funny to note the awkwardness of the transition back into traditional dungeon crawling, just in case anyone was enjoying doing something different for once.

Crownfall is available for $24.99 as a hardcopy and $27.99 for the Roll20 edition. You should know which of those formats you prefer, but for the money you get a reasonable amount of content, especially if you choose to utilize the online content.
I am excited to see where else War for the Crown takes us, and releases should be fairly regular.

John Farrell is a legal aid attorney specializing in domestic violence, living in West Chester Pennsylvania. You can listen to him travel the weird west as Carrie A. Nation in the Joker's Wild podcast at: https://jokerswildpodcast.weebly.com/
Related Articles: Pathfinder: Crownfall, Tabletop
Share
Tweet
Share
Submit