Dead by Daylight has come a long way since its humble beginnings four years ago. With only a handful of killers including The Trapper, The Wraith, The Hillbilly, and The Nurse, along with a few survivors initially, it’s impressive how much of a following this 4v1 asymmetrical horror game has gathered. With plenty of DLC being added, including original characters like The Clown, The Spirit, and The Deathslinger, along with licensed killers like Freddy Krueger, Michael Myers, and The Demogorgon, we’ve been given a lot to play with. Now, as a part of its 4th anniversary, Silent Hill has made its way to the world of Dead by Daylight. Survivor Cheryl Mason, and killer Pyramidhead, have been pulled into the fog, which means things are about to get much creepier. 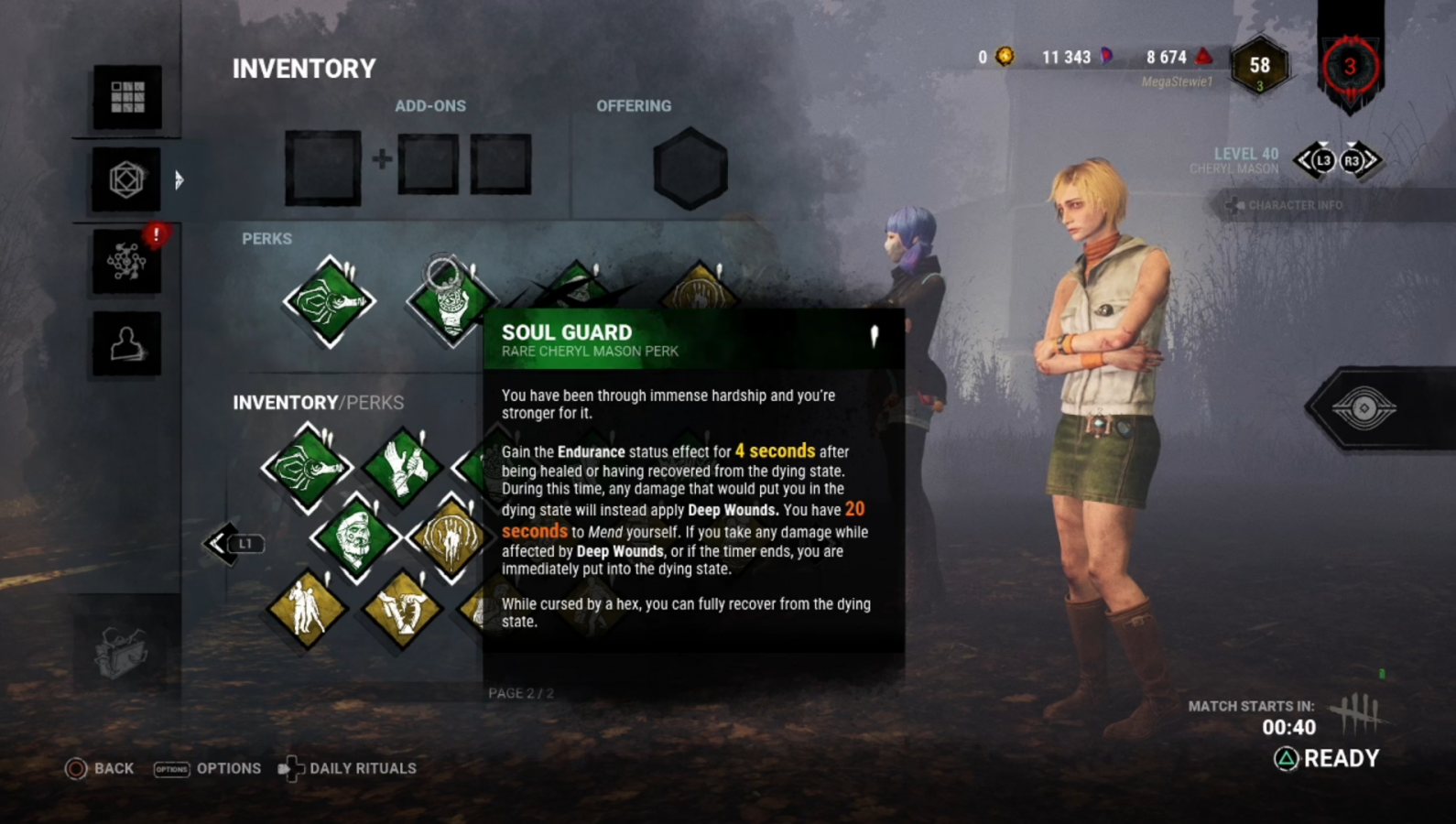 Starting with Cheryl Mason, it seems that she just can’t catch a break. Thankfully, she has some useful perks as a result of everything she’s survived. First, we have Repressed Alliance, which requires her to work on generators for a specific amount of time before it can be triggered. After repairing for a combined total of between 60 and 80 seconds (depending on the perk’s level), you can press the action button while working on a generator to call upon the Entity to block it for 30 seconds. You may think this is a hindrance to the survivors, but it can prevent the killer from kicking that generator right away and regressing your repair progress. It can be a nice last resort to protect the hard work that you’ve done.

Second, we have Soul Guard, which gives her the endurance status effect for between 4 and 8 seconds after being healed or recovering from the dying state. If she takes any damage during this time, she suffers from deep wounds, meaning that she must mend within 20 seconds or else she’ll drop. Taking any extra damage during deep wounds will also knock her down. This is extremely helpful because it gives her a better chance to escape the killer if they come after her immediately after she’s been fixed up. This is a good defense against killers that are hounding you and aren’t giving you much of a chance to live your life in peace. 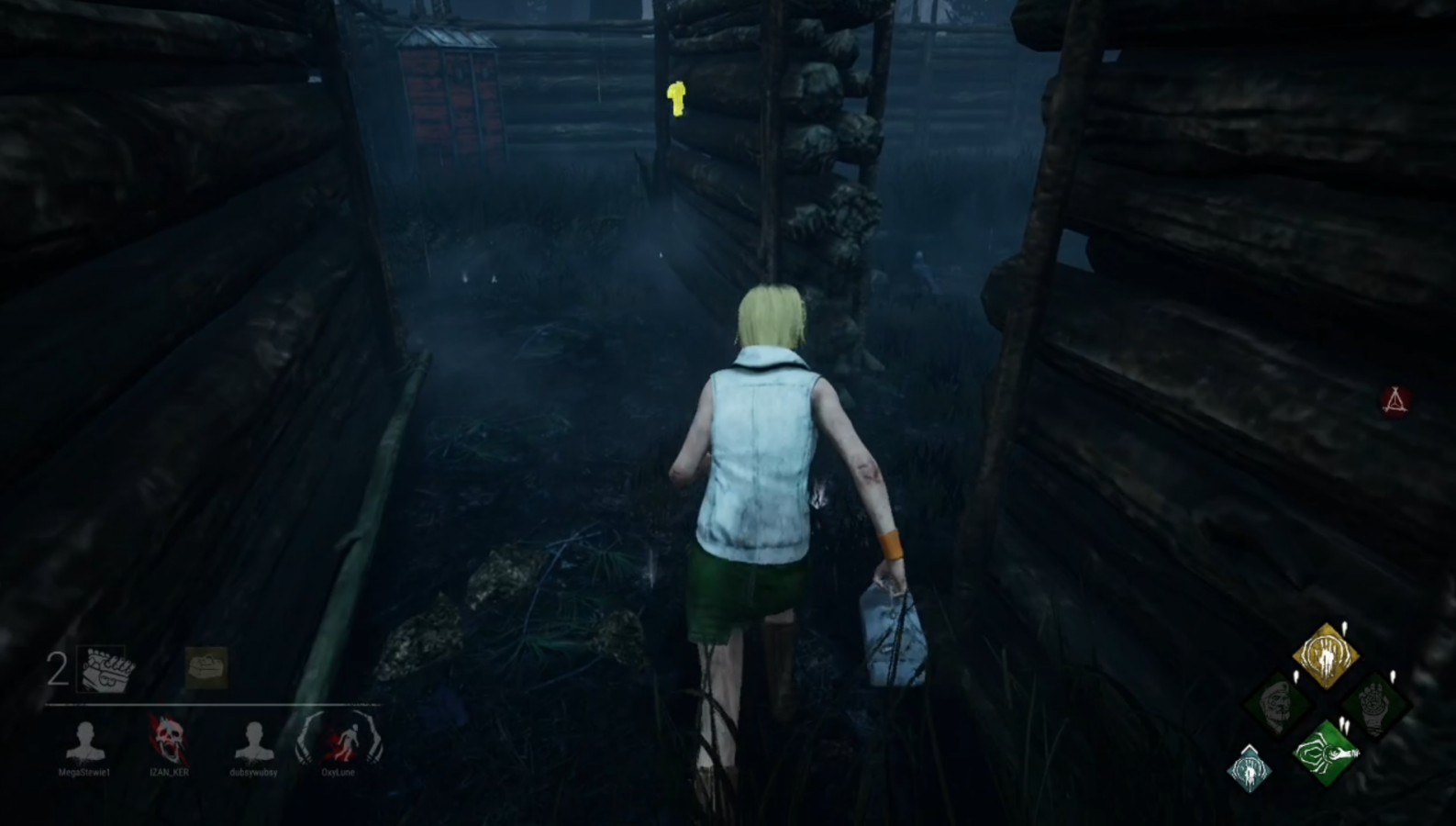 Finally, she has Blood Pact, which connects her to the obsession. If her or the obsession are injured, they will both see each other’s auras. This is awesome because it makes it easier to find a friend to help heal you, especially if you’re not in voice chat with that teammate. It’s helped me out plenty of times while using this perk. As a bonus, when either one of you has healed the other, you both get the haste status effect for between 6 and 10 seconds. Haste basically just increases your running speed for a short time. It’s a nice extra nudge of “alright, now that we’re all better, let’s get out of here!” If you’re using this perk and become the obsession, it deactivates, which makes sense since it requires another survivor in order to work.

Now, let’s move onto Pyramidhead. Armed with his giant blade, he’s ready to cut down some survivors and punish them. His special ability allows him to drag his blade short distances, creating trenches of torment along the way. Any survivors that walk or run through these trenches are affected by torment, which momentarily notifies the killer of their location, and sets them up for punishment later. When creating trenches, you can also charge up and launch a short range attack that goes through obstacles. It doesn’t go far, and you have to aim it well, but it can be pretty helpful, as you’ll see in the above video. You can try to catch a survivor before they vault a window, or even try to hit them from behind a wall. It takes some getting used to it, but man do I love this ability. 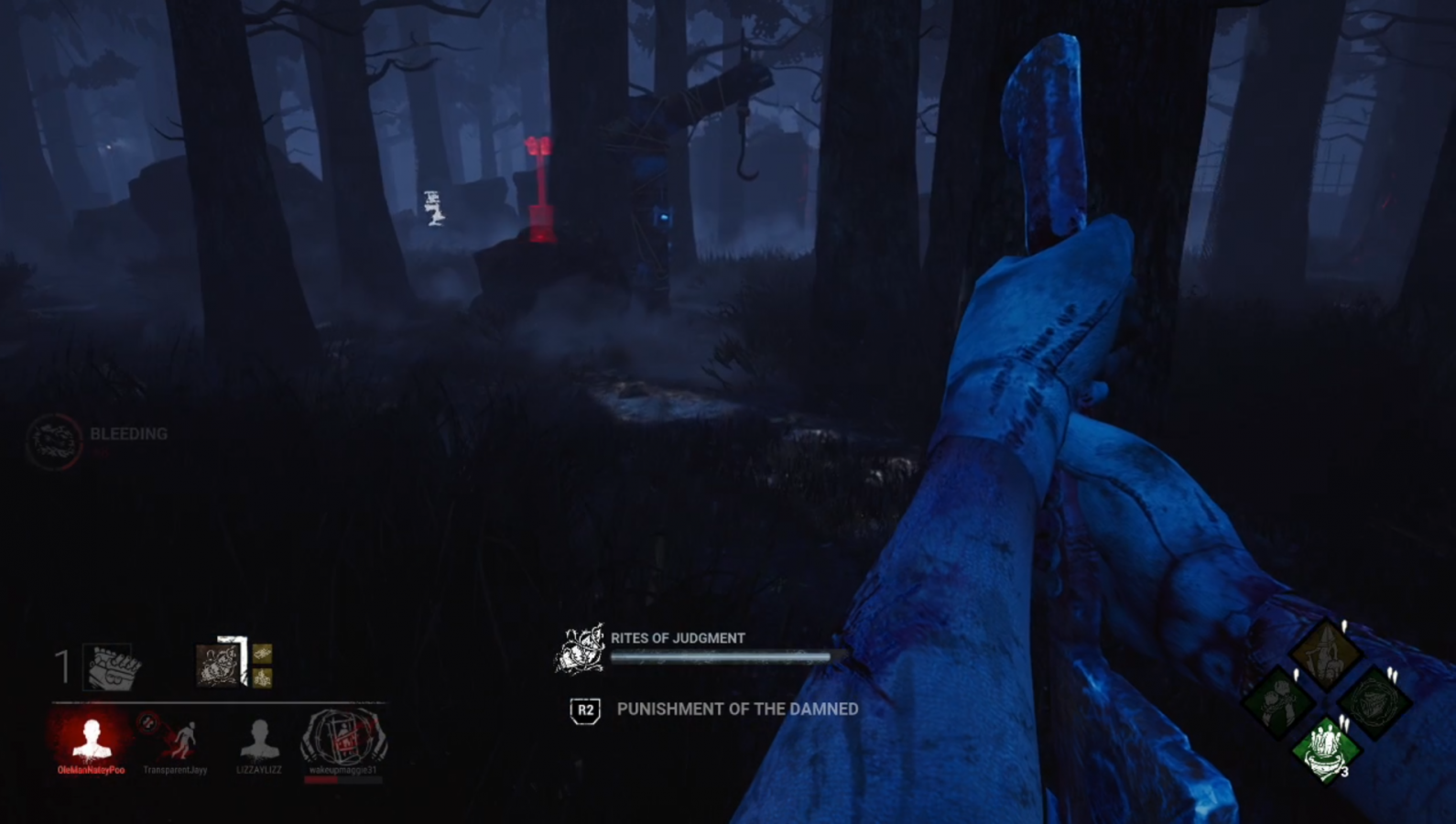 One unique thing to Pyramidhead is that if you down a survivor afflicted with torment, you can choose to send them to a cage of atonement instead of carrying them to a hook. This sends them to one of several designated spots on the map where they are trapped in a cage, similar to being hooked. They can still be rescued like normal, but there’s another interesting feature. If the survivor would be in the struggle phase, they must complete skill checks in order to survive instead of mashing the struggle button. Not only that, but the skill checks get smaller as time passes. Yeah, talk about punishment, am I right? Being rescued from a cage removes your torment, and it does the same for whoever saved you as well. Unfortunately, those are the only ways to remove torment. One last thing about torment, and it’s a doozy. If you would be on your death hook and you’re afflicted with torment, Pyramidhead can choose to execute you after he’s downed you. It’s brutal, but he’s named The Executioner for a reason.

Alright, this monster likes to punish people, and his perks show that pretty well. First, we have Trail of Torment, which lets him become undetectable for 16 seconds after kicking a generator, but it highlights that generator in yellow for the survivors. This means that he has 16 seconds of no terror radius, allowing him to sneak up on unsuspecting victims and slicing into them. This is by far my favorite perk that he has because of how scary and practical it can be. Trail of Torment can only be triggered once between every 80, 70, or 60 seconds (depending on the perk’s level).

Second, we have Deathbound, which is one perk that punishes survivors for helping each other. When a survivor heals another survivor for one health state at least 32 meters away from the killer, the healer will scream and reveal their location to the killer. As an extra punishment, for the next 60 seconds, the healer will suffer from the oblivious effect when farther than 16, 12, or 8 meters from whoever they healed. Being oblivious means that they are unable to hear the killer’s terror radius, which is very scary in this game, trust me. This essentially forces the two to stick together or else the healer won’t be able to hear you coming. This can be good for bunching up survivors to do some damage, if that’s what you want to do. 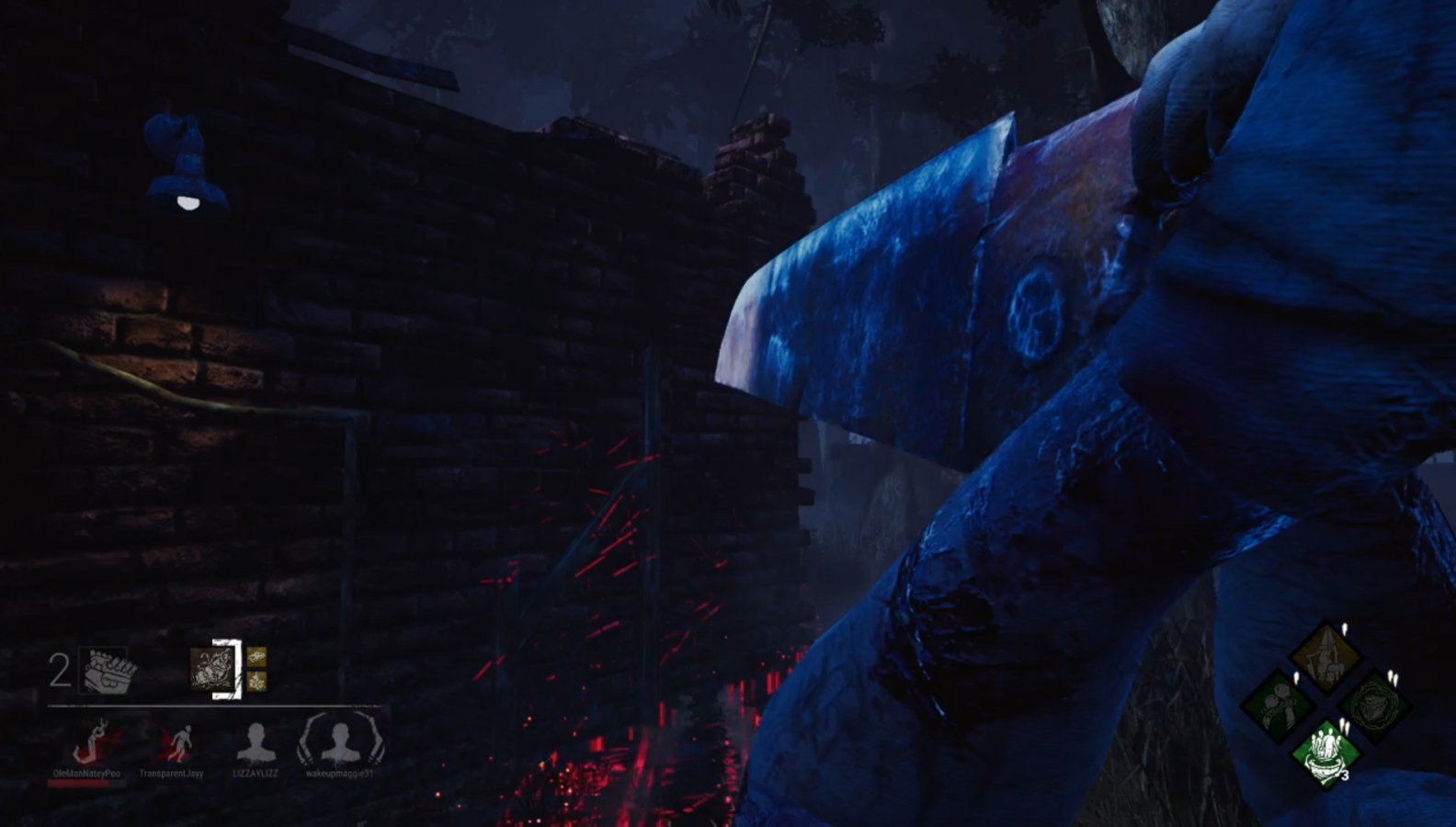 Finally, we have Forced Penance, which gives a little extra pain to a survivor who tries to protect an injured comrade. Any survivor who takes a protection hit gets affected by the broken status effect for between 40 and 60 seconds. Being broken means that they can’t be healed, which is not fun when the killer can hear you grunting in pain. This can make it easier to find injured survivors and prevents them from hiding from you as easily. It’s a simple perk, but it will make survivors think twice about taking risky protection hits.

Overall, Cheryl and Pyramidhead are fantastic new additions to the Dead by Daylight family. Not only are they amazing to look at, but their perks add more to the gameplay, and will likely change up the meta game even more. Pyramidhead is a beast and he will punish you if he gets the chance, so watch your back! Along with them, the new map is incredible. It’s creepy, it’s gross, and it captures that Silent Hill atmosphere in the best way. I unfortunately couldn’t get into that map in my video above, but trust me when I say it’s a sight to behold. All that being said, the Silent Hill Chapter is a great way to celebrate 4 years of Dead by Daylight. With that, none shall be silent, all shall be punished!

Codi loves to play video games and watch movies. He will watch almost any kind of movie just to experience them. His ideas take inspiration from the shows and movies he watches, and games he plays. He also loves a good pun.
Related Articles: Dead by Daylight
Share
Tweet
Share
Submit