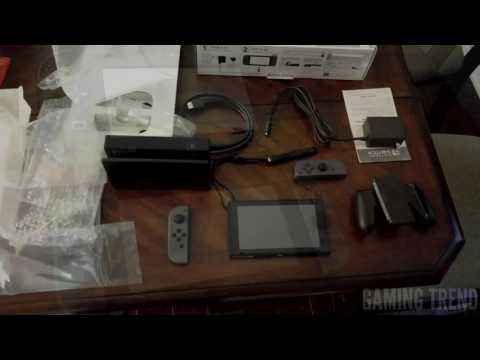 The launch of the Nintendo Switch is just around the corner.  Even though Nintendo did an official unboxing video, theirs didn’t have a cute pair of doggies walking through, nor did they show a side-by-side with the Nintendo Wii U, the Nintendo 3DSXL, and the PlayStation Vita.   I also showcased how easy it is to move the Joycons from the console to the controller and back.

You’ll have to wait for my full review for a little while longer, but let me just say that any doubts I had about the Switch or Nintendo’s approach to this console generation have been answered.

Unboxing videos aren’t my usual thing, but check it out and let me know what you think.  Is the Nintendo Switch smaller than you thought it’d be, larger, or just right?    Stay tuned for our full launch coverage on March 1st.

Ron Burke is the Editor in Chief for Gaming Trend. Currently living in Fort Worth, Texas, Ron is an old-school gamer who enjoys CRPGs, action/adventure, platformers, music games, and has recently gotten into tabletop gaming. Ron is also a fourth degree black belt, with a Master's rank in Matsumura Seito Shōrin-ryū, Moo Duk Kwan Tang Soo Do, Universal Tang Soo Do Alliance, and International Tang Soo Do Federation. He also holds ranks in several other styles in his search to be a well-rounded fighter. Ron has been married to Gaming Trend Editor, Laura Burke, for 21 years. They have three dogs - Pazuzu (Irish Terrier), Atë, and Calliope (both Australian Kelpie/Pit Bull mixes).
Related Articles: Hardware, Nintendo Switch
Share
Tweet
Share
Submit