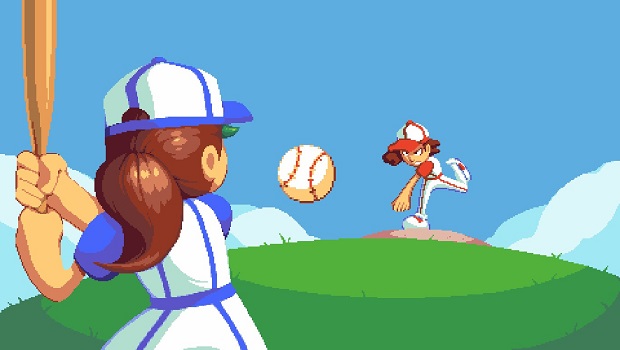 Tetris, Pac-Man, Space Invaders. These franchises have been in the gaming market for decades, and even though the industry changed, a lot of the arcade classics have stood the test of time. It seems the best remakes of these games are ones that add fresh gameplay while staying true to the source material. For every terrible Tetris Ultimate comes a terrific Pac-Man Championship Edition 2 or Space Invaders Extreme. In the same vein, Aliens Go Home Run is a Breakout-inspired action game that dips into shoot-em-up territory and becomes one of the most entertaining experiences I’ve had in awhile.

In Aliens Go Home Run, you control Sally, a baseball player with a pretty mean swing. It’s so mean, in fact, that a literal out-of-this-world home run accidentally destroys part of an alien civilization. Angered by the intrusion, aliens invade Earth, and it’s up to Sally to knock them all down in style.
Right off the bat (pun intended), the game drops you in a pseudo tutorial screen where you can hone your swinging skills. By moving left and right, you can adjust where you hit a baseball that bounces around the gameplay field. As mentioned previously, the game is inspired by Breakout (or Arkanoid, depending on if you’re playing as Taito game) as you have to hit differently colored blocks on a gameplay screen. If you do end up missing the ball, you can slide to it and hit it again, so there isn’t a penalty for letting the ball get out of control.

This is a redeeming feature, as the other inspiration makes this game a whole lot more complicated. Taking cues from bullet hell shoot-em-ups, aliens lurk all around you. You’re going to have to dodge enemy fire as well as clear all blocks to complete a level, and being hit three times will cause you to lose the level. Thankfully, there are an assortment of power-ups randomly hidden inside various blocks, and they stack up and get more offensive as you collect more. At the first tier, it’s a basic 1-up that erases a strike, while at the final tier, you get sonic waves that can hit enemies as well as destroy blocks. It’s really up to you when you want to use these different abilities, and it’s a decision that can make or break a playthrough.
If there’s one thing that sets this apart from a Breakout clone, it’s the fact that you have to balance breaking blocks with destroying enemies. While some stages favor timeliness, others require you to deal with enemies first in order to clear a path to other blocks. It’s these split-second decisions that can be stressful but rewarding, and I really liked the rhythm of the fast-paced gameplay here. By sliding, Sally can negate bullets and dash to the left or the right, which is crucial when the stage starts to get littered with bullets and baseballs.

The game is divided into five different worlds of ten stages each, with additional bonus stages opening up afterwards. Every five stages, a boss battle occurs. This is probably one of the best things about Aliens Go Home Run. While they all play off the “attack enemy weak point for massive damage” archetype, the different methods of dispatching bosses are nothing short of impressive. From a boxing robot that telegraphs its punches to a spaceship that can flip gravity at its whims, you’re definitely going to have to think about your strategy to defeat these aliens. While slightly easier than some of the levels, the bosses were varied and unique.

Ice to meet you! (In all honesty, this was one of the most annoying bosses)

The presentation harkens back to the 16-bit age with Genesis-styled graphics and audio. The announcer calling out power-ups or strikes is delightfully retro, and the 90s aesthetic is fitting for a challenging game. The pixel art is gorgeously designed and really pops out with bright colors and fluid motion. I was surprised at how detailed the game was, considering its art style. It also runs perfectly, with only minor slowdown when the screen was lit up with bullets (which only happened a couple of times). While there are a select few enemy types, they all have different bullet patterns, and a new kind shows up every world. The slow introduction makes the experience worthwhile as you face almost insurmountable obstacles that you might have to repeat a few times before completing. While the overall presentation and gameplay is addictively satisfying, it doesn’t overstay its welcome. At $4, you’ll get a few hours of bullet-batting action, and the amount of content feels perfect for the price.
However, there are a couple of issues that put a damper on the experience. Due to the level design, some stages end up either being randomly unwinnable or just plain annoying. There are enemies that can attach to Sally like a Metroid, and you have to mash the swing button to get out of their grip. In the meantime, you’re probably a sitting duck for enemy fire, which can be very annoying in later levels. This happens a lot near the end, and it did make for a few unfair deaths. Additionally, due to the level layout, sometimes it would take only a few seconds to clear a string of blocks, but other times I struggled to keep a rally going. The entry points for some stages seem unfairly small, and end up feeling unintuitive compared to the rest of the game.

Instead of sucking life force out of you, you’re probably going to get hit at least once.

If you do feel like you could make better levels, however, the game includes a level editor, which is actually pretty clunky at this time. There was an update that went around recently, but I still felt like blocks and enemies weren’t going into place when I wanted them to stay put, and it’s a bit difficult to coordinate enemy behaviors. The mode feels like an afterthought, and it could have been a more user-friendly experience. However, it’s a functional editor, and making simple levels should be a breeze. Just don’t expect masterpiece quality stages.

Aliens Go Home Run is a title that packs a punch and has the balls to mix Breakout with shoot-em-up action. It’s a game that aims to be a fun little diversion, and accomplishes that goal quite well. At $4, it’s a must buy for anyone looking for a palate cleanser in the sea of AAA games.

Elisha Deogracias is an aspiring accountant by day, freelance writer by night. Before writing for Gaming Trend, he had a small gig on the now defunct Examiner. When not being a third wheel with his best friends on dates or yearning for some closure on Pushing Daisies, he's busy catching up on shonen manga and wacky rhythm games. Mains R.O.B. in Smash. Still doesn't know if he's a kid or a squid.
Related Articles: Aliens Go Home Run
Share
Tweet
Share
Submit