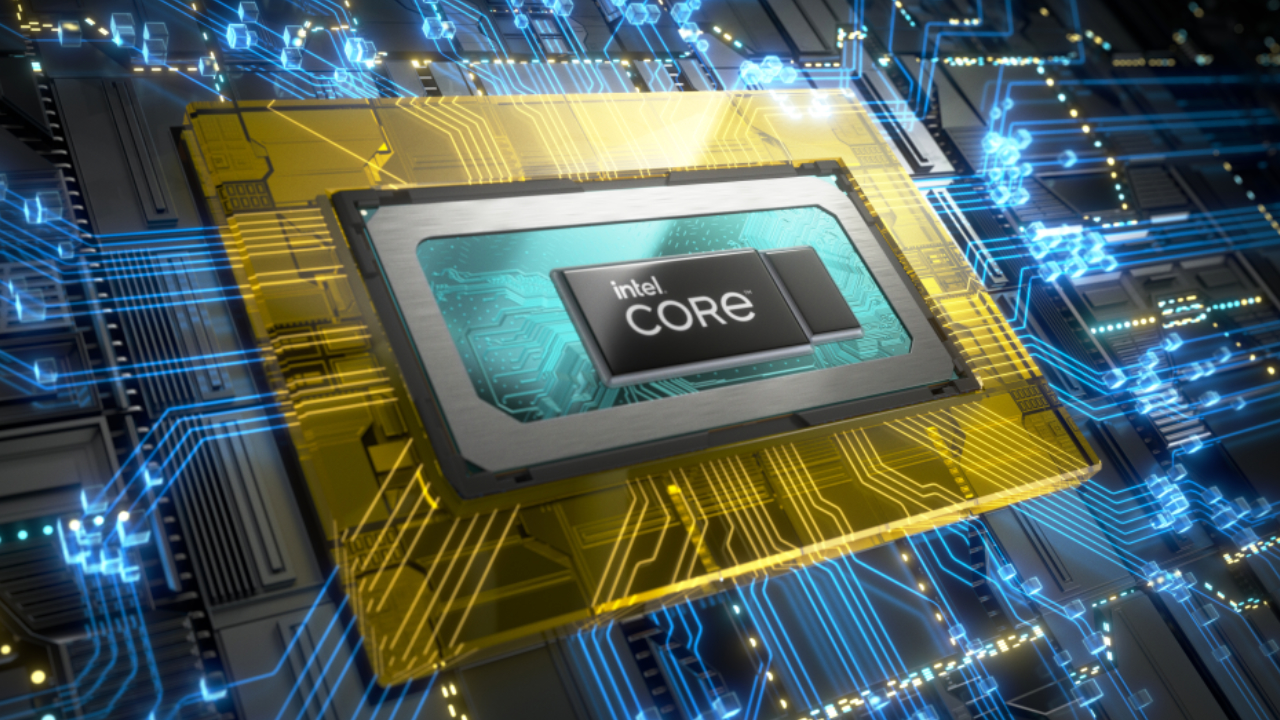 Intel is back at CES in a big way, offering up some huge updates on some of their flagship products, and we’ve got the inside scoop. Recently we sat down with Daniel Rogers (Director of Mobile Product Marketing), Mandy Mock (VP CCG General Manager, Desktop, Workstation, and Channel), Josh Newman (VP CCG General Manager, Mobile Innovation), and Kate Porter (Sr. Director of Segmentation & Scale, Business Client Platforms) to look at what the tech giant has in store for 2022 and beyond. 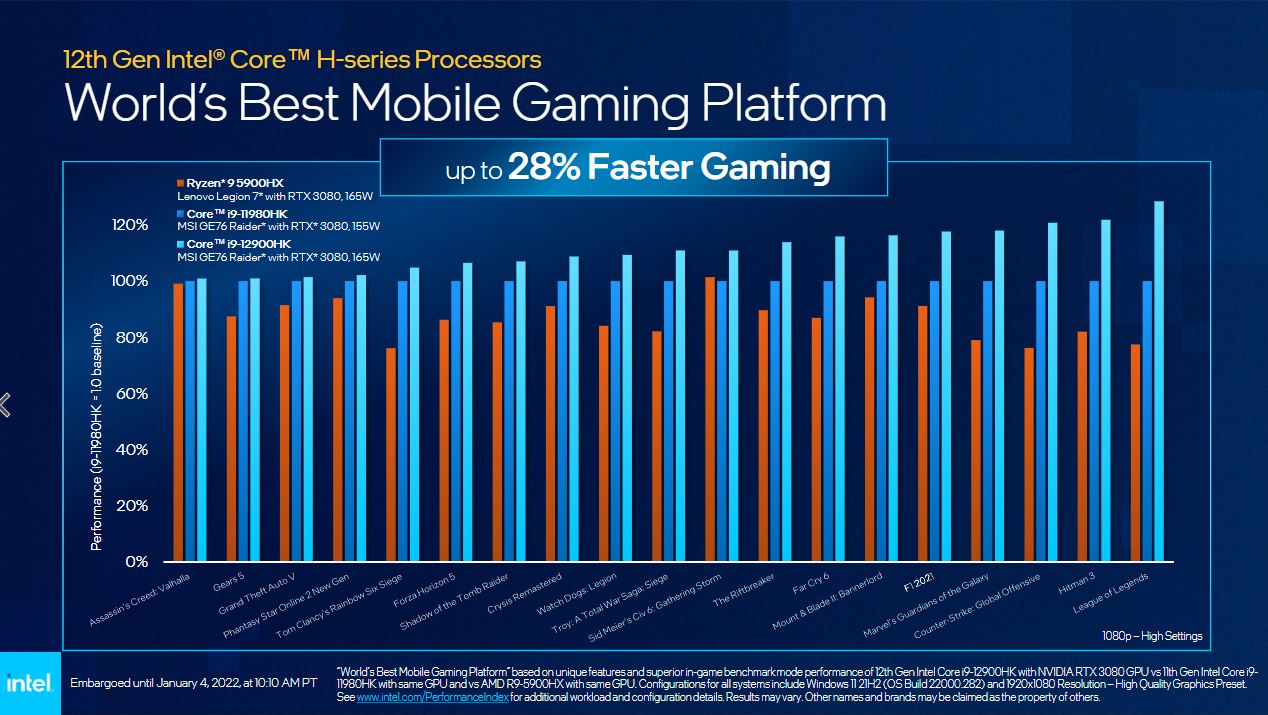 Kicking things off, Intel is focusing on the mobile space in a big way, announcing three new mobile platforms with an emphasis on power consumption while still pushing the envelope on performance. The three categories of mobile devices are the H-Series, an enthusiast-focused 45W CPU, the P-Series that looks to strike the balance between thin but high performance at 28W, and the U-series — an ultra low-power consumption chip that comes in at either 15W or even 9W! These newest chips may be thin and light, but they’ll still be supporting the latest tech, including DDR5, Wi-Fi 6E, x12 PCIe Gen3, x8 PCIe Gen4, Thunderbolt 4, and more. Like their desktop counterparts, these mobile chips will move to a 14 core setup, with 6 being performance cores, and 8 as effeciency cores, with Intel’s new Thread Director to manage them. In all, Intel has announced a whopping 22 new SKUs in their desktop and mobile processor lineup — easily one of the largest slates of fresh tech ever launched at one time. 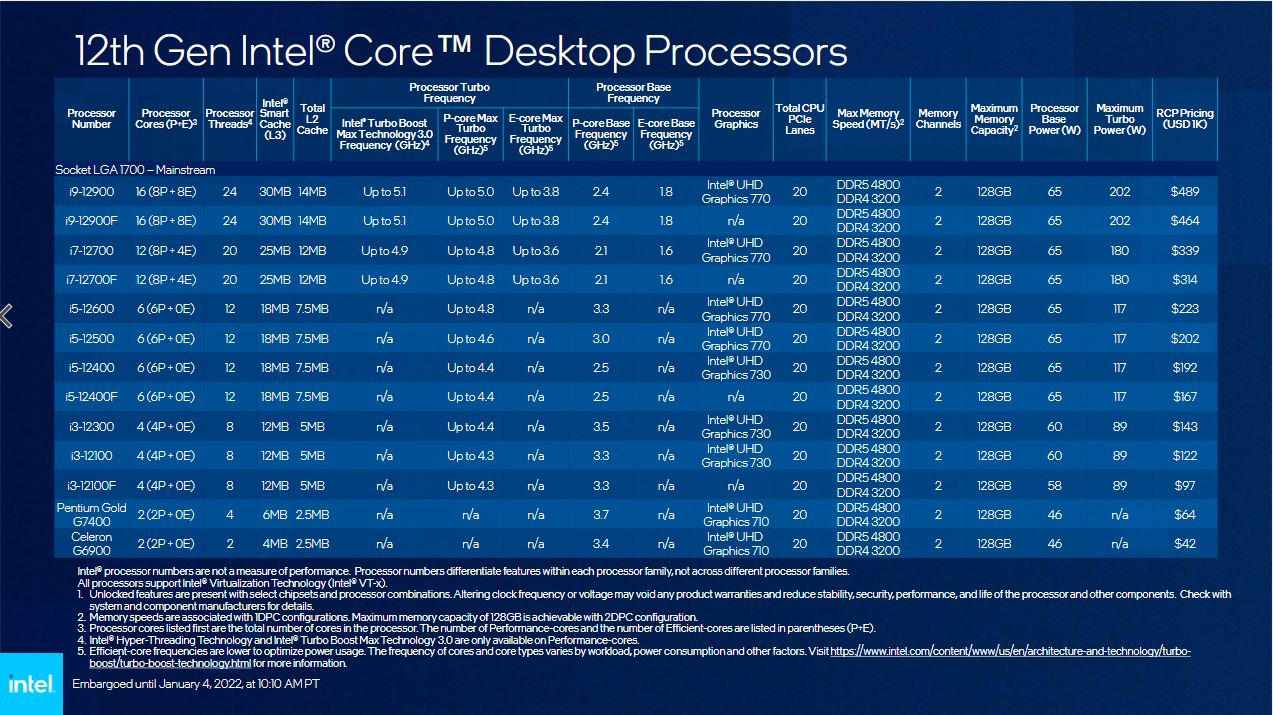 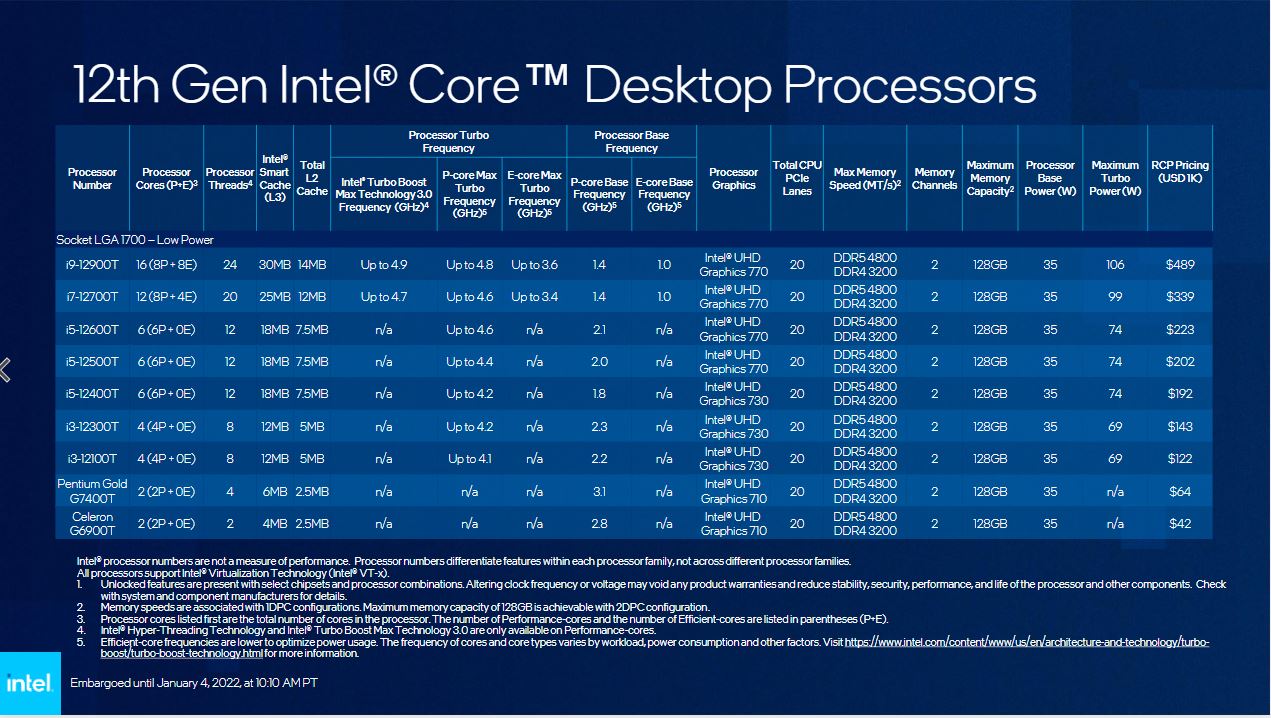 While the Intel Z690 chipset launched late last year or the most high-end applications, Intel has a few new more value-focused chipsets in the wings for those not looking to break the bank. These chipsets, the H670, B660, and H610, feature most of the same features, but perhaps with fewer PCIe lanes or USB ports. We’ve got a handy chart to check out right here for ease of reference. 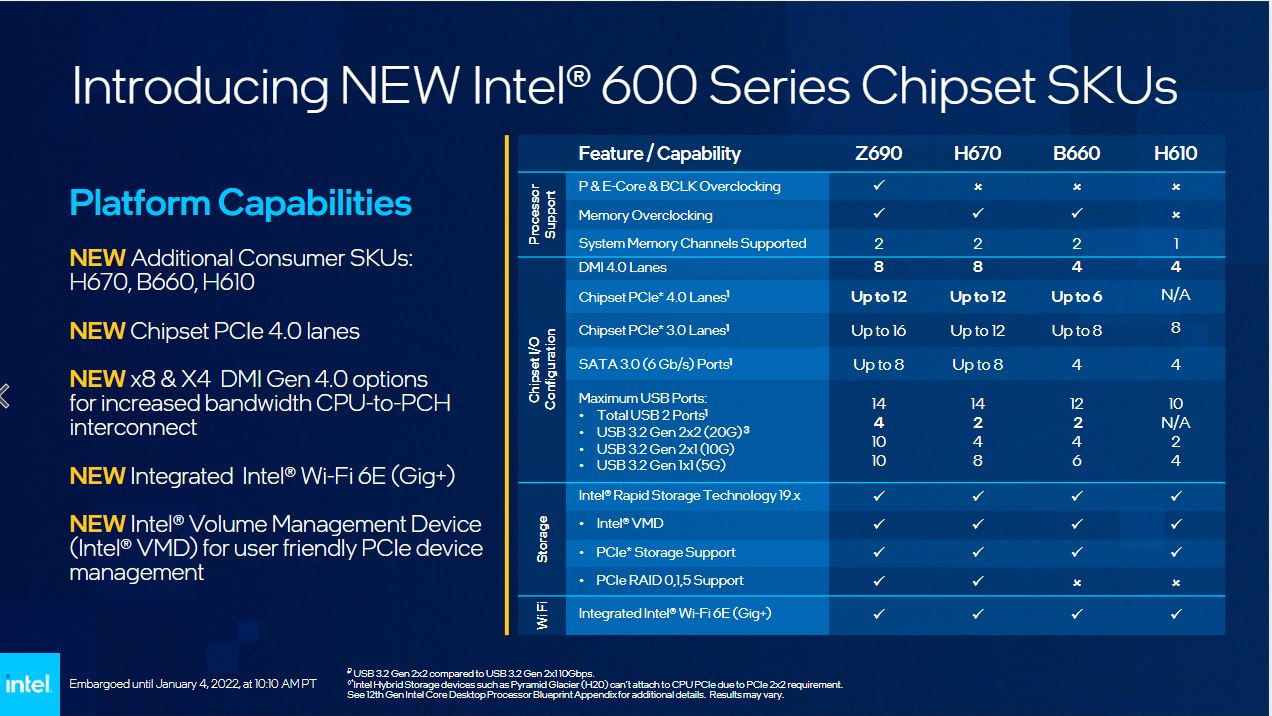 It’s clear that Intel is once again aiming to serve gamers, business, and enterprise alike with a wide array of processors and chipsets to serve wherever your needs and budget align. I’m eager to see more on their upcoming GPU, but there’s no doubt that the processor side of things is well-covered by Intel’ss 12th generation CPU platforms. There are literally hundreds of new laptops, desktop replacements, ultraportables, and everything in between launching in the next quarter from companies like MSI, Asus, HP, Gigabyte, Dell, Acer, Razer, OriginPC, and many more. We’ll get our hands on a few and let you know what sort of performance improvements we see, but based on our experience with Intel’s flagship 12900K, it’s going to meet or exceed their conservative estimate of a 28% improvement over the 11900K. You can bet that we’ll only see that number increase as DDR5 matures as well. It’s an exciting time to be a gamer! 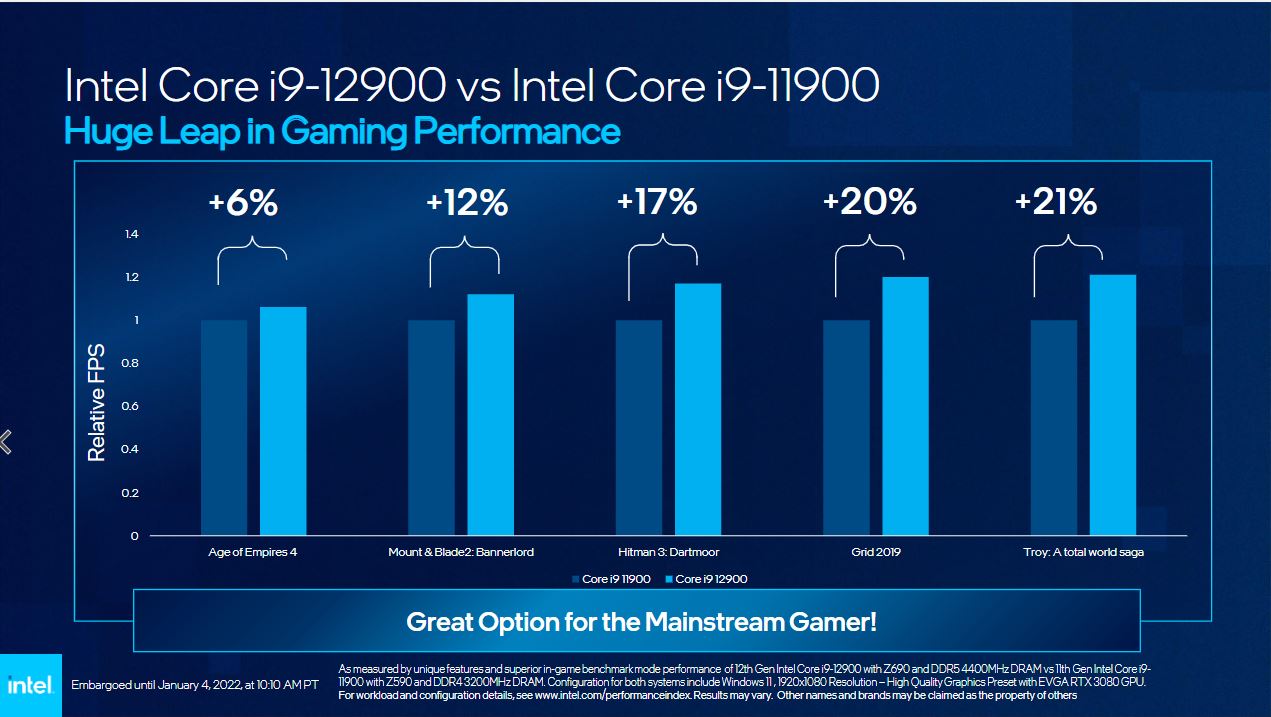 Stay tuned for more coverage from CES 2022, as well as all things tech and gaming right here at GamingTrend.com

Ron Burke is the Editor in Chief for Gaming Trend. Currently living in Fort Worth, Texas, Ron is an old-school gamer who enjoys CRPGs, action/adventure, platformers, music games, and has recently gotten into tabletop gaming. Ron is also a fourth degree black belt, with a Master's rank in Matsumura Seito Shōrin-ryū, Moo Duk Kwan Tang Soo Do, Universal Tang Soo Do Alliance, and International Tang Soo Do Federation. He also holds ranks in several other styles in his search to be a well-rounded fighter. Ron has been married to Gaming Trend Editor, Laura Burke, for 21 years. They have three dogs - Pazuzu (Irish Terrier), Atë, and Calliope (both Australian Kelpie/Pit Bull mixes).
Related Articles: CES
Share
Tweet
Share
Submit