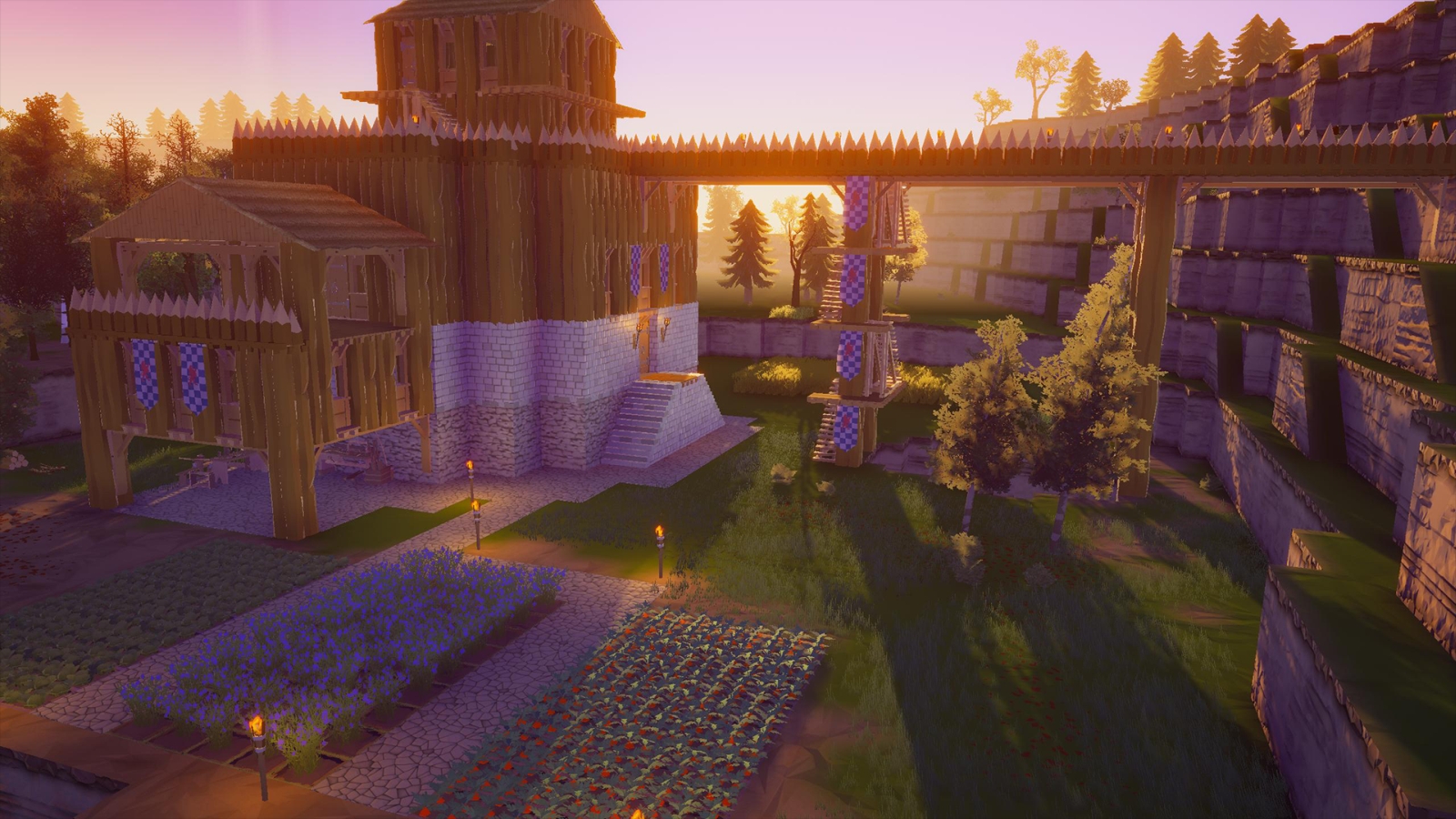 As I sit here playing Going Medieval, the new colony sim builder from Foxy Voxel, I wonder how the hell we as a human race actually survived the medieval times. Much like real life back in the Dark Ages, Going Medieval pits your colonists up against brutal scenarios like freezing temperatures, illness, attacks, starving to death, and much more. These poor chaps survived the Black Death, but that is going to look like a walk in the park soon enough, because things get nuts real fast in this game! It’s being compared to RimWorld, which I never played, but I do enjoy a good sim game, especially if it’s set in the past, and I’ve really been having fun with Going Medieval.

Your goal is to overcome all of these harsh obstacles that are working against you, while trying to build up a village and eventually a castle. Each of your colonists will have their own likes and dislikes, and all of them have individual skills they will excel at. There is a lot of micromanaging for each colonist, and it’s all handled in a few fairly simple UI management tabs. 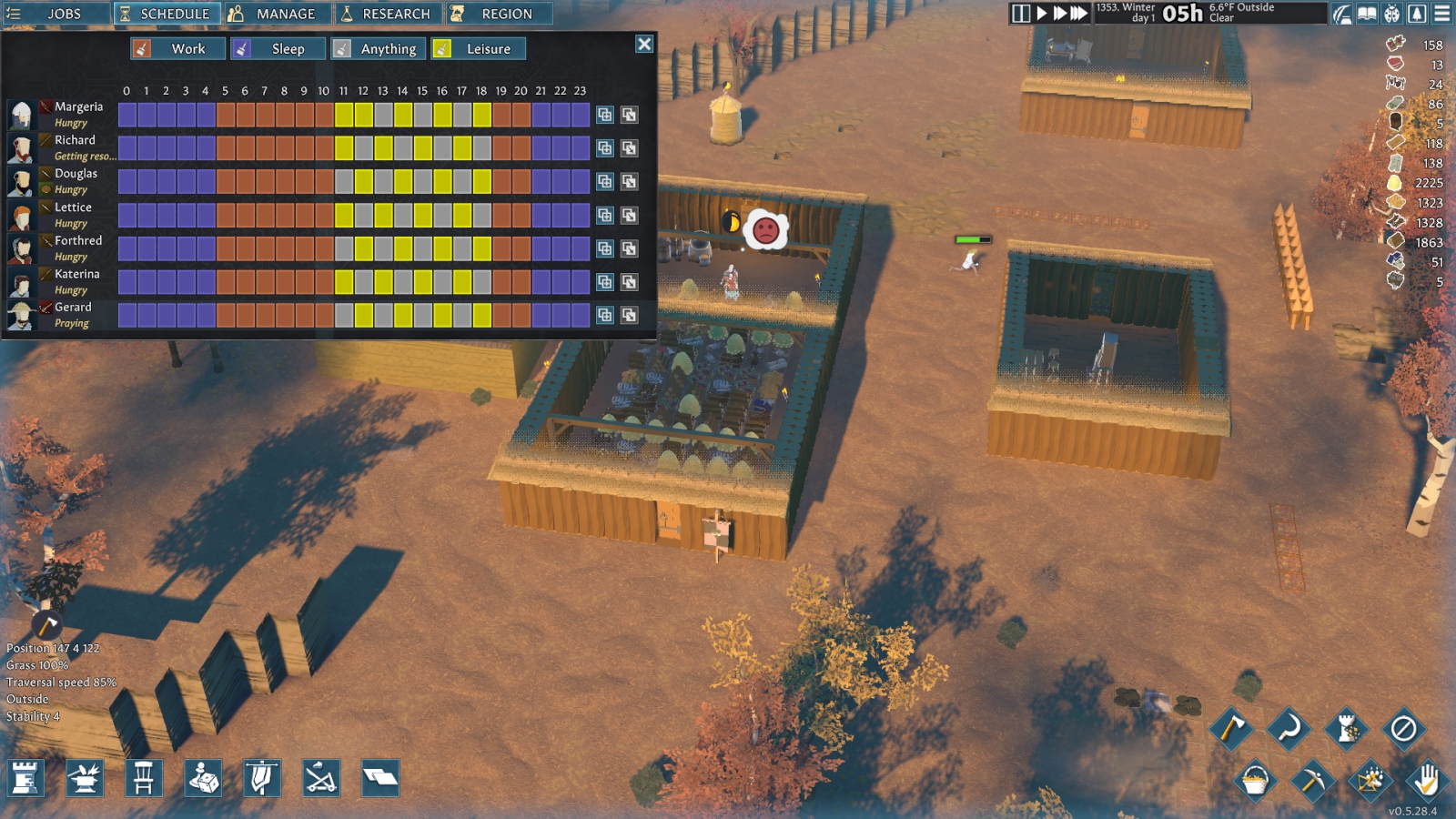 The Schedule management tab. You’ll use this a lot, so be sure to learn how to navigate it right away.

You can set the amount of time each day that your colonists spend sleeping, working, and relaxing through the Schedule tab. This is very important to get used to, as you will need to change this panel quite frequently for things like weather changes and injuries. For example your colonists only get their wounds tended to when they sleep, so if someone needs help, make sure you set them up to rest. Who likes to work when it’s hot outside? Not me, and not your colonists, so when it’s hot out, change their rest times and let them “chill” out inside during the hotter parts of the afternoon, and work in the morning and evening. Tweaking things like this will be a constant thing, but luckily it’s quite easy. 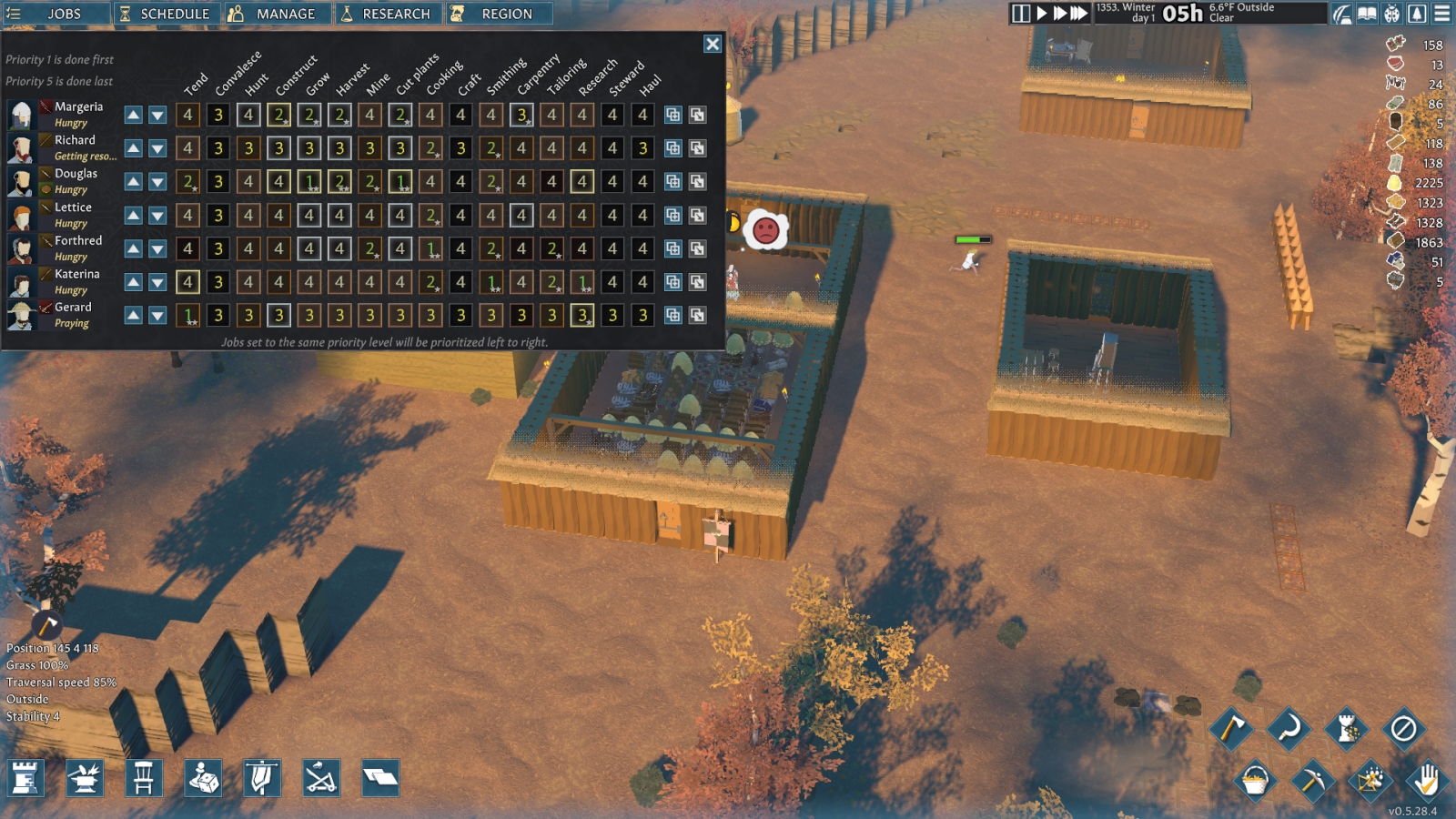 The Jobs tab, make sure to prioritize jobs and give them to the villagers that excel with certain skills.

You’ll also want to adjust all of your colonists’ job rankings right at the start of the game, and also do this for each new colonist that joins your settlement. Set the priorities higher for your sims who have higher proficiency in the particular job. You can find this under the Jobs tab. 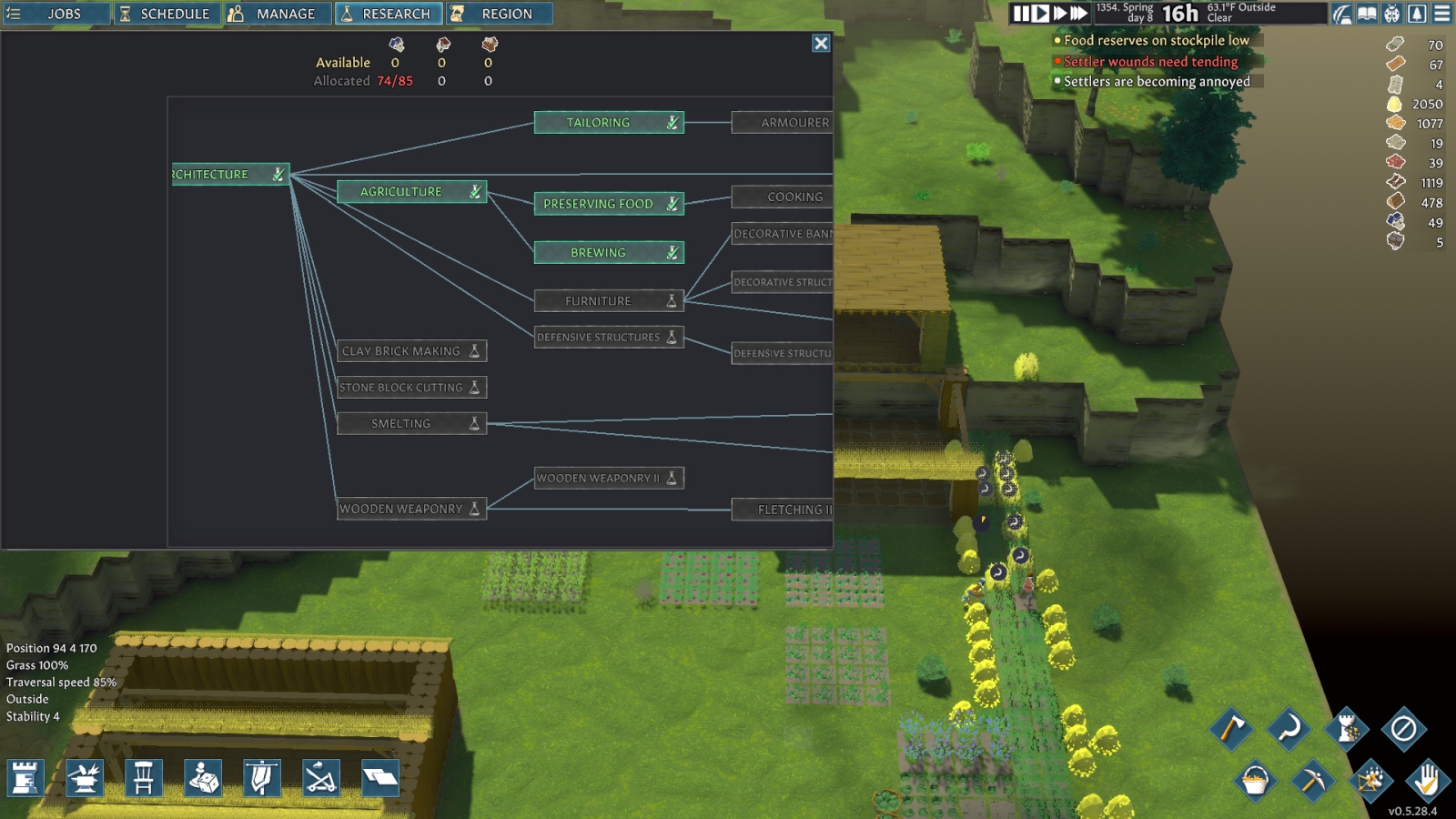 The Research tab. Make sure you set up a research table right away and have someone working it to produce the books needed to unlock your research.

On top of all that, there’s an important Research tab you need to keep an eye on, as it unlocks items you need to progress as a settlement, such as better furniture, drinks, weapons, and better building materials. You unlock it with books you make from your research table, so be sure to build that early and get someone to work on it as soon as possible.

Your sims will want leisure time, and get mad quickly if you don’t provide the time and spaces to do so. Drop one of each of the shrines and a backgammon table as soon as you can. Since it wasn’t obvious to me at the start, they also like to eat their meals at a table, so crafting a table and chairs for them at the start will help their mood.

I think I bit off more than I could chew and started off with really big lots for my home, workplace and stockpile warehouse. Before long I was out of just about everything my game started out with. My colonists lived, but were very unhappy, and have been ever since. I failed these guys pretty hard, and thought about starting a new game, but decided to go back and try to overhaul things after watching a few very helpful videos on getting started. Now I am taking a shot at building up onto a mountainside to try to give my villagers some protection with a choke point for attacks. 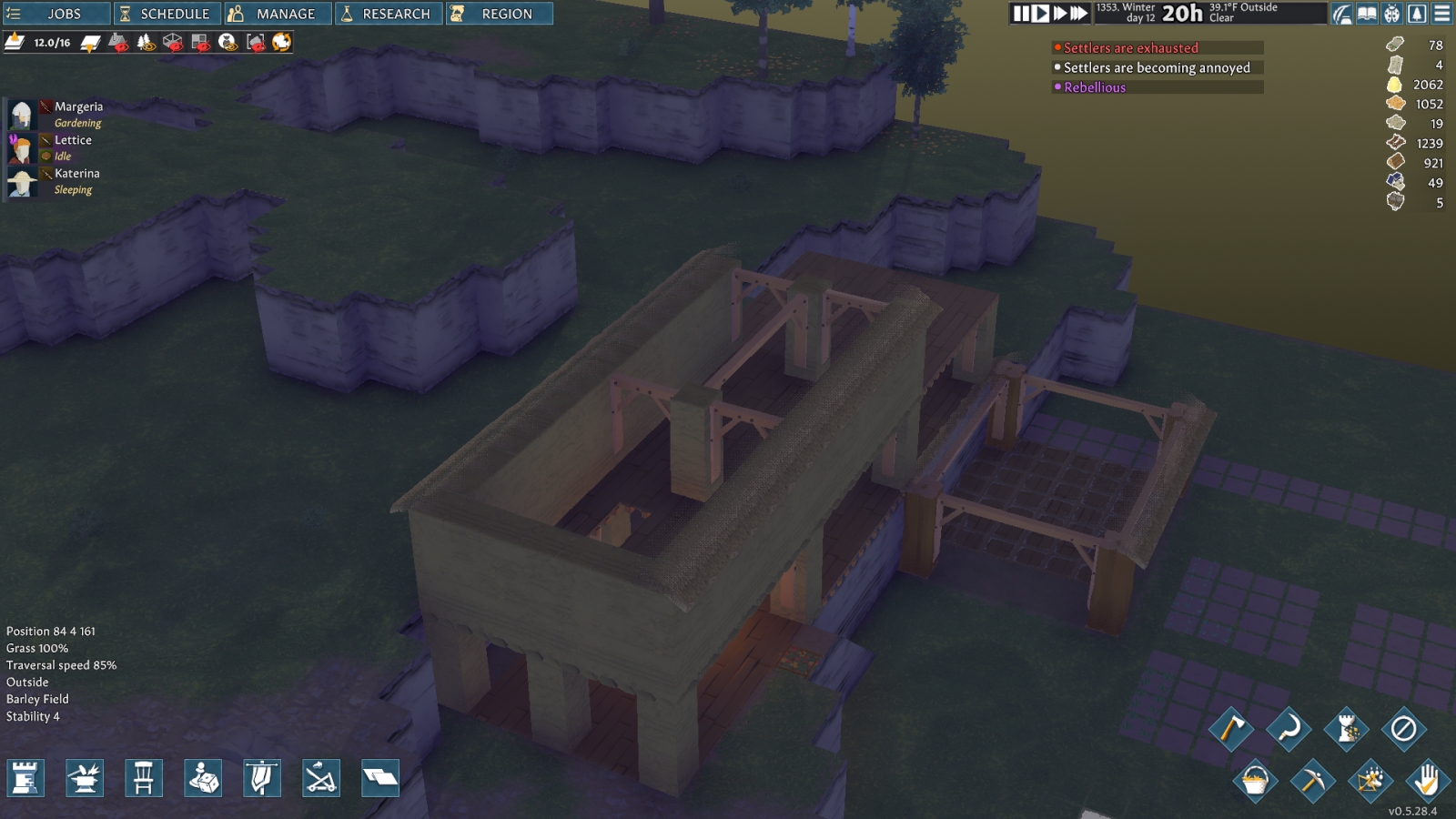 My attempt at building up into the mountainside.

Some of the things in Going Medieval aren’t really explained, or aren’t explained well enough in some cases. It took me about an hour to finally understand the UI and everything involved, and I am embarrassed to say about another hour before I realized you can see all of your resources on the right hand side of the screen. A bit more of an in depth tutorial might help combat this issue.

It wasn’t long before my settlement came under attack, and somehow my idiots all managed to live through it. Again, an easier to understand UI for battle might help some of the confusion I had. Right now, I only have stick traps and merlons available for defenses, but I am hoping that once I complete my fortress up on the mountain and unlock some more research I will be able to defend myself better. 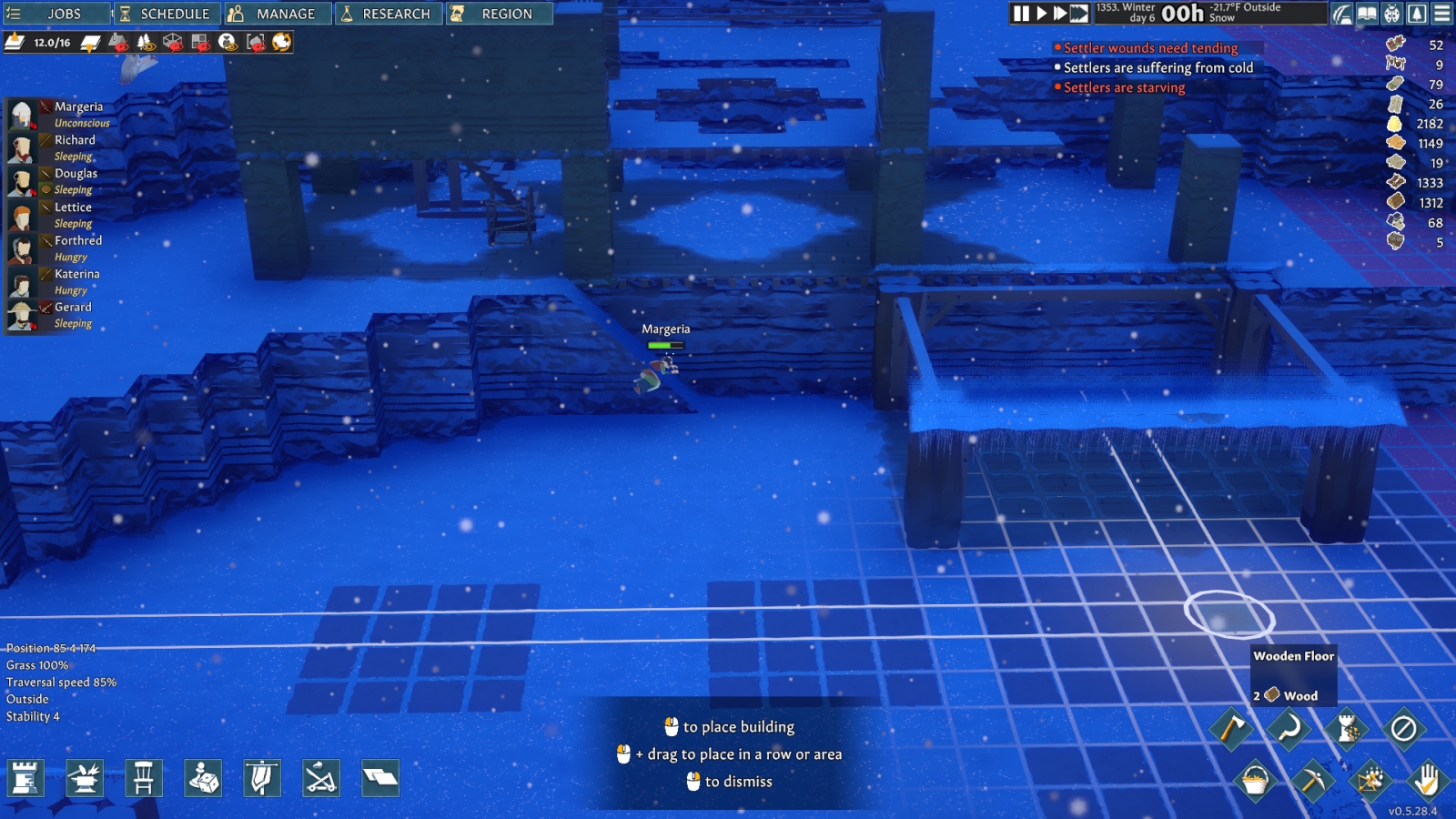 My poor Margeria passed out from the cold. This was a nail biter, I really thought she was going to die, but somehow she pulled through.

Seasons in this game can, and will, kick your ass. I started out in Spring but before long it was summer, and most of the meat I had gathered up rotted because I hadn’t made a basement for storage. Temperature plays a huge part in the game, for both your villagers and your storage. I am now in the middle of my first winter, and just about every single one of my villagers passed out in the snow outside at least once whilst building my new base. I was working on making better winter clothing for them, but before I could finish, a pack of wolves attacked and made quick work of most of my colony. I am down to three colonists who are all badly injured, rebelling, and bleeding out. Oh, and all of this in the middle of a cold snap. So take it from my failed experiment on my first map, prepare for summer and winter as soon as your game starts. 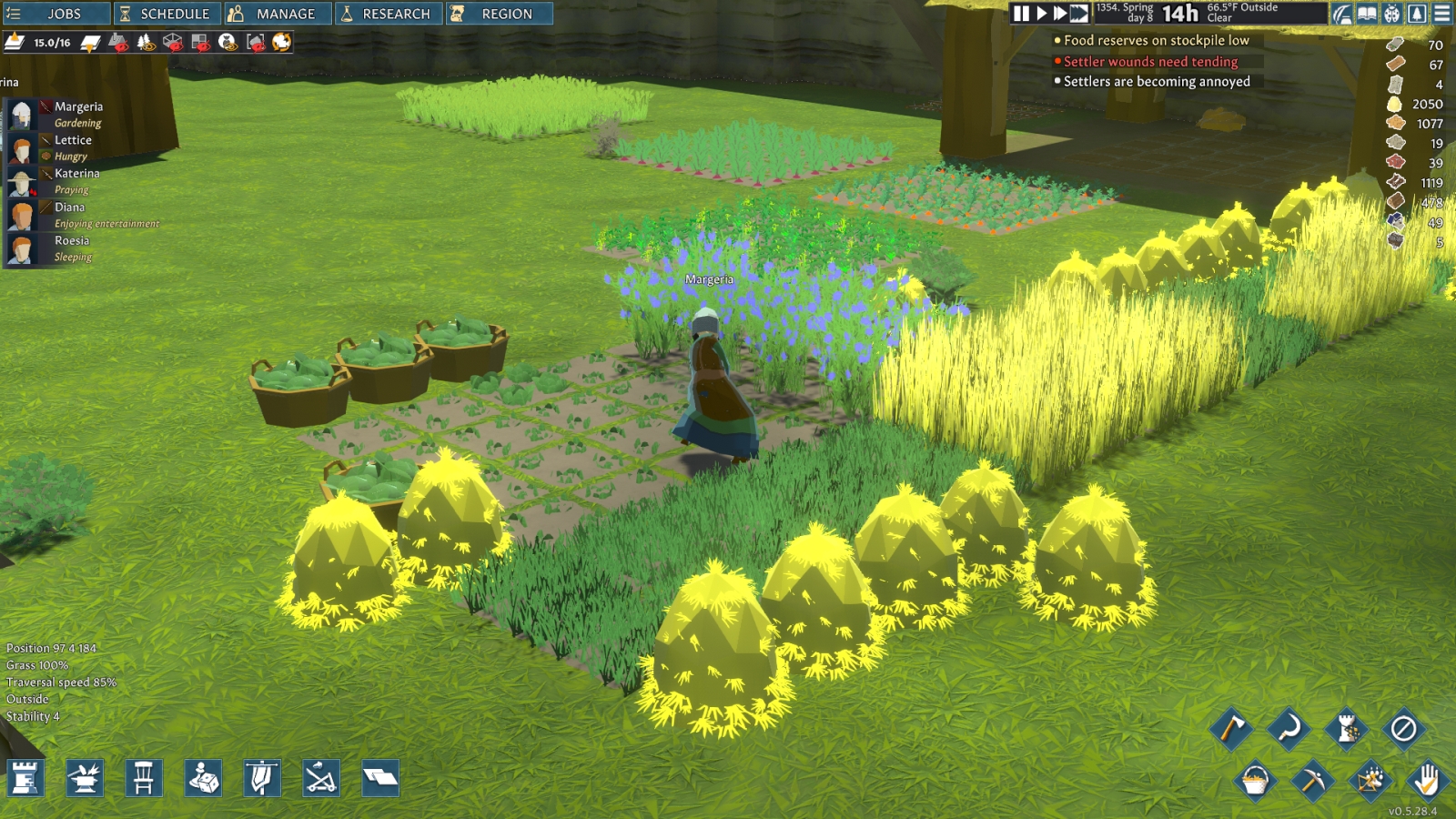 The hero of my game, Margeria. After surviving attacks from enemies, wolves, and almost dying in the snow, here she is good as new plowing the fields.

My poor little colonists have been through a lot in just one season, and as the remaining three dig graves to bury their friends in, I have to wonder what the next year will bring for them. I have one villager named Margeria who has been the hero of the entire settlement in more ways than one, and thankfully she didn’t die. I was scared when she passed out in the snow and had only a few hit points left, but she picked herself up, limped back to her bed with blood spraying everywhere, got herself patched up and now she is back out in the fields plowing for the spring plant. That Margeria is one tough cookie. I definitely have to organize my storerooms and items better, and make sure that I stockpile more food in the basement so all of her hard work doesn’t go to waste. 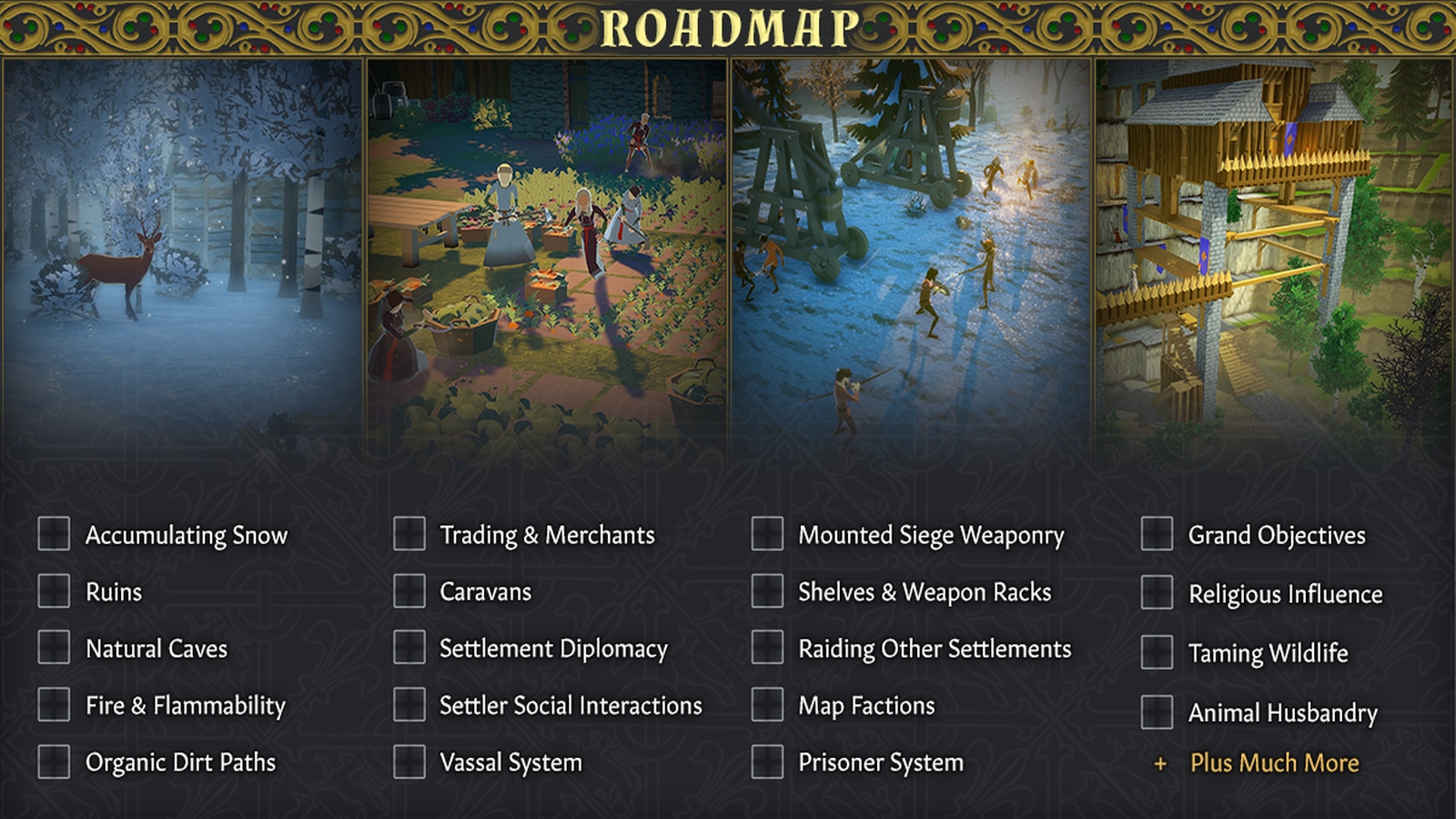 The devs have given us a roadmap of things they plan to implement into the game. Even in the early access state of the game, it’s very enjoyable. I definitely enjoy a challenge, and Going Medieval certainly is giving me one. There are only a few small things that (in my opinion) could be tweaked with the tutorial, but overall this game is fantastic and I can’t wait to see it evolve over the next few months.

Keep your eyes peeled for continuing coverage on Going Medieval, which is currently in Early Access on Steam for $24.99 USD.

Holly Hudspeth is a best-selling author living in Fort Worth, Texas. She has six published novels to date; The Skyy Huntington Series, which is an epic dark fantasy adventure, and One Small Detail, a stand-alone medieval fantasy. Holly also enjoys writing fan fiction based on her avatars from games such as EverQuest, Elder Scrolls Online, and World of Warcraft. Her first major purchase at the established age of nine was the NES, and she has been gaming ever since. She enjoys fantasy games, city builders, RPGs, MMOs, SMITE, and The Sims franchise. Most nights she is in SMITE with her husband and friends, or playing ESO. When she isn't gaming, she is probably either at Disney or planning her next trip there.
Related Articles: Going Medieval, Indies
Share
Tweet
Share
Submit