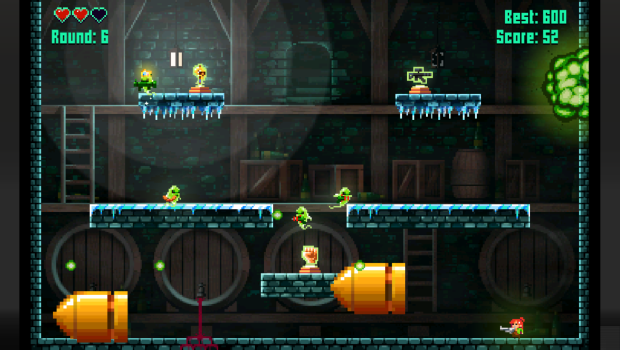 Those three words are how Mike Christatos, president of Golden Ruby Games, summed up their new game to me, and in my time spent running from apparitions of my own creation, I found it to be very fitting.

Extreme Exorcism is all about motion and reflexes. A mixture of pixelated party shooter and insta-death platformer, you start each stage by killing a single ghost using one of the many weapon pick-ups available. Once you’ve downed that ghost, Round 2 begins, only now the ghost mimics your movements and actions from the previous round.

Ghosts grow in number with every round, more and more green ghouls imitating your every move.

This continues until the screen is filled with ghastly mirrors of your former selves, jumping around and blasting buckshot everywhere until you finally kill the crowned ghost and start the next round, doing it all over again for as many rounds as you can survive.

While you only combat your own ghosts in single-player, once you add more people you’re not just fighting yourself but many, many versions of your friends. It’s fast, frantic, and chaotic, but it’s the kind of quick and exciting gameplay that merits the best kind of couch combat.

I had a chance to chat with Christatos about his team’s game and their influences, and he told me that couch multiplayer influence drove much of the design of Extreme Exorcism.

Angel wings allow you to permanently remove ghosts, as well as end the level.

“We’ve always been fans of games like Mario Kart, because they’re not only challenging but lots of fun and great to play with friends,” said Christatos. “In their essence, they really boil a game down to its core fundamentals – the ‘fun’ part being the most important. We like to push that boundary of acceptable difficulty, trying to challenge players in new and interesting ways.”

The combat can get frantic at times, especially with friends, but the rounds keep the action quick and the gameplay loop short, meaning you’re not spending time reflecting on a misplayed death — you’re gearing up for the next round, already thinking through your revenge on the buddy who downed you last round. Action gets going quick, but the key is to stay focused on the goal and keep moving.

“You might be able to remember a handful of your past moves, but there’s a breaking point – even for those with the best short term memory,” said Christatos. “The only defense for this extreme gameplay is to be constantly aware of your surroundings and never standing still.”

Pixelated special effects fill the screen with every gunshot and explosion.

There’s not only fighting with your friends, though. You can also play co-op and work together with others to reach higher levels, taking down the ghosts as a team. No matter what, the focus is on playing together and sharing that physical and virtual space.

“Games are always fun, but they’re even better when you get to work together or fight against a friend or loved one,” said Christatos. “Twitch and online multiplayer can offer the same feeling one gets while playing games with friends, but there is just something special about being in the same room as someone.”

Extreme Exorcism also uses an extremely interesting aesthetic. It isn’t often you play a game about blasting spooky ghosts with rocket launchers and slashing them with swords, much less ones that mimic your former self. Christatos told me that while the concept was there, Extreme Exorcism wasn’t always about ghosts and ghouls.

“The original title for Extreme Exorcism was actually ‘King of Clones’ and instead of ghosts, you fought clones of yourself,” Christatos said. “Unfortunately, our testers didn’t quite understand the concept of fighting their past selves, but we found that the ghost mechanic from Mario Kart really helped players to understand the concept. After that, we decided to run with the ghost theme and Extreme Exorcism was born.”

Some arenas are open, while others are more closed-off and frantic.

You’ll have to wait until the end of summer to get your hands on this ghostly couch party, but until then you can follow Golden Ruby Games on Twitter, along with publisher Ripstone, and as always, keep it tuned to Gaming Trend for the latest on Extreme Exorcism.