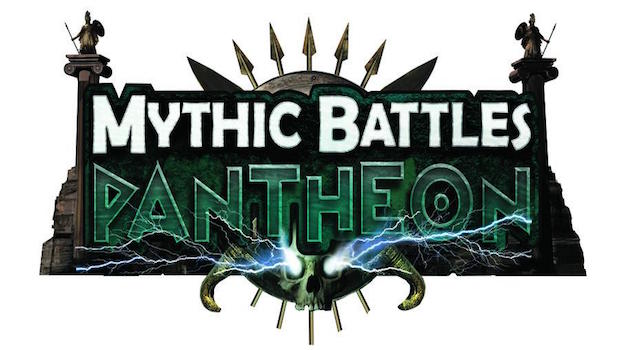 In an effort to stand out from the crowd, it’s not uncommon to see game publishers host members of the gaming media. Some of these events are lavish affairs and others are fairly subdued, but all have the same goal: to create buzz of an upcoming release. Monolith and Mythic Games, co-publishers of the upcoming Kickstarter Mythic Battles Pantheon, had a presentation that leaned towards the latter. Relegated to a dimly lit room in the back of a restaurant, it wasn’t the spectacle you’d expect of what was boasted to be a big Kickstarter launch. It was difficult to gauge expectations for a game when I came in with little idea of what the game even was. At least the pizza was good.

What the team lacked in presentation skills was overcome by the effort made into the game itself. Mythic Battles Pantheon is set in an alternate world of Greek mythology. Zeus’ wife, Hera, disgusted with his infidelity, unleashed the Titans, and now chaos reigns on Mt. Olympus. Destroyed gods have turned into omphalos gems while surviving gods seek these gems out to help restore some of their powers lost during the conflict. You act as one of these gods, recruiting an assortment of heroes, mortals, and monsters in an effort to collect these gems and become the most powerful god in a newly shaped world.

The miniatures are nothing short of astonishing.

Mythic Battles Pantheon initially looks as if it was designed to be a miniatures battle system, but in actuality, it’s a tactical combat game using miniatures. Though the miniatures crowd may rush to create three dimensional terrain, the game will contain boards on which players move their combatants around. Even on the board, terrain matters as height and line of sight play an important part in combat.

This is certainly not the first game to incorporate miniatures, but these are exemplary and worth noting. Not only are they finely detailed and come pre-assembled, but they are scaled to signify their importance. Gods are the largest of the figures with each other group (heroes and monsters) scaling down in size until you reach the mortals. Even then, army groups, such as mortal armies or hell hounds, that have multiple figures incorporate more than one sculpt. It was impressive to see a group of hounds in different phases of spring assembled on the board.

Elevation and line of sight both play a significant role in combat.

Each character or character group comes with a particular number of activation cards to bring your units into play. These are combined with Art of War cards to create a deck. Art of War cards have several special uses such as allowing you to search through your deck for a certain activation card, move another unit on the same turn, or activate the special power of your god, like Zeus’ lightning attack.

The attacks, defense, and special abilities of your units are handled in a pretty interesting way. Each unit has a dial that has all the units vital stats. As a unit is damaged, the dial is turned and the stats can change. It’s a fantastic system to show how your units change as wounds begin to take their toll.

As characters take on damage, their attack and defensive values may change.

Damage is taken through a dice combat system. Game dice are numbered one through five with one blank side. Blanks are misses and fives are rerolled with the result added to the original five to determine damage. All other numbers can be used to raise another die up one. Let’s say you roll a three, four, and five on dice. The three can be used to make the four a five instead. The two fives are now rerolled to determine damage. The results on those dice are added to each previous five individually. A roll of two and four would result in hits of seven and nine. If the monster you are attacking has a defense value of eight, you would hit that monster once . If its defense was seven, you’d have scored two hits. What may be complicated on the surface is actually an intriguing way of adding a strategic element to dice rolling.

The $100 price tag for the upcoming Kickstarter may seem a bit steep, but Monolith and Mythic Games plan to have over 100 sculpted miniatures at launch. That coupled with a promise of stretch goals and exclusives, $100 may be a pittance for the quality you’ll be getting in return. Look for Mythic Battles Pantheon on Kickstarter this fall. If my first impression is any indication, this will be an astonishingly successful campaign.