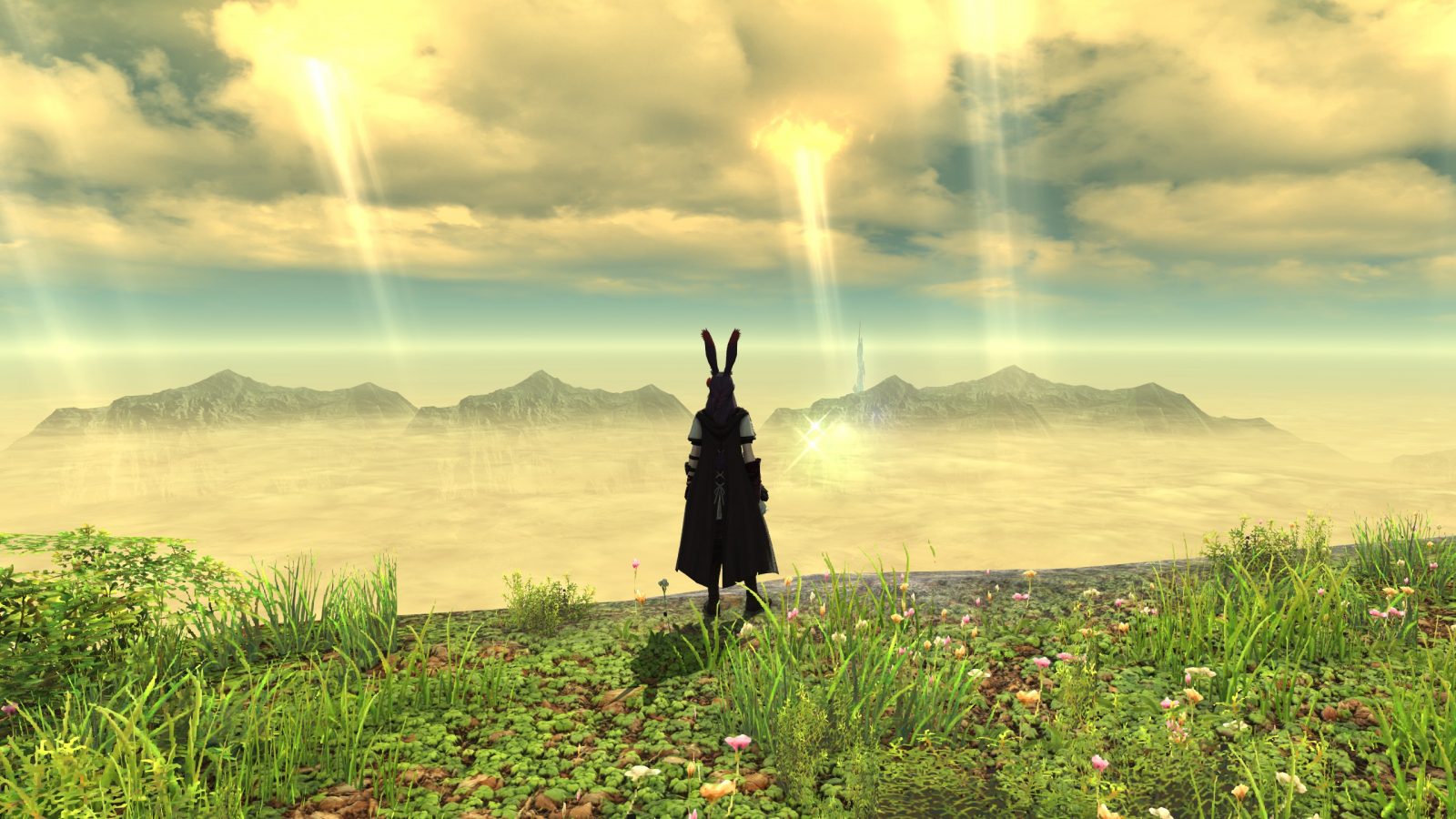 This article will contain spoilers for Final Fantasy XIV Endwalker.

After Endwalker’s conclusion, Final Fantasy XIV is starting a brand new story arc. The scions of the seventh dawn have officially disbanded, but that doesn’t mean you can’t still go on adventures with your friends. With rumors of a vast and ancient treasure beneath the Bounty, the Warrior of Light, Estinien, Y’Shtola, Urianger, and G’Raha embark on an undersea adventure. However, what they discover could have far reaching consequences for the Source and its reflections.

Patch 6.1 for Final Fantasy XIV introduces a lot of new content to the game, including new Main Scenario Quests, a full rework of PVP, the start of an original Alliance Raid, and more. While it has a few glaring issues, Newfound Adventure is quite possibly one of the best patches to date.

I started off playing the MSQ, which is refreshingly lighthearted this time around. After the epic stakes of Endwalker, it’s nice to reset to a more laid back adventure with plenty of jokes and nice moments with these characters we’ve spent so much time with. Y’Shtola gets the most spotlight here, showing off her more tender, caring side. You can watch my full playthrough above, including the dungeon. It’s a very enjoyable chapter, but it mostly consists of walking somewhere to talk to someone, watching a cutscene, then walking somewhere else. Aside from the excellent dungeon with brand new boss mechanics, you don’t actually fight anything. Instead, cutscenes here have a surprising amount of dialogue choices, some of which lead to hilarious results. Of course your choices have no real impact aside from the immediate response, so I do wish there was a bit more substantial interaction here.

After reaching a certain point in the MSQ, you can begin a quest chain to investigate the Phantom Realm. You and your companions discover that it is actually the realm of the gods, who challenge you and 23 friends to deadly combat. While I usually enjoy each Alliance Raid once or twice, I find they quickly become cumbersome and I usually skip that section of the roulette in my dailies. This time around, however, I’m actually really excited to try it again! While the NeiR and Ivalice series’ fights felt a bit overwhelming, here it feels like mechanics are introduced and explored more clearly. For example, the battle against Rhalgr combines knockback with an oddly shaped arena you can fall off of, so you have to make use of narrow platforms with walls at one end to avoid instant death. The music, as usual, is also fantastic, but Balance has quickly become one of my favorite tracks in the game. I should also note that the Immerse gamepack has been updated several times since we last covered it, and the audio compression is mostly non-existent now with headphones, but can be clearly heard through computer speakers. It may be worth getting if you appreciate that kind of 3D audio and still gives the music the room it needs to shine. I’m excited to see where the story goes, since we’ll learn the truth about the gods and hang out more with Krile, who’s gone sadly underutilized for far too long. 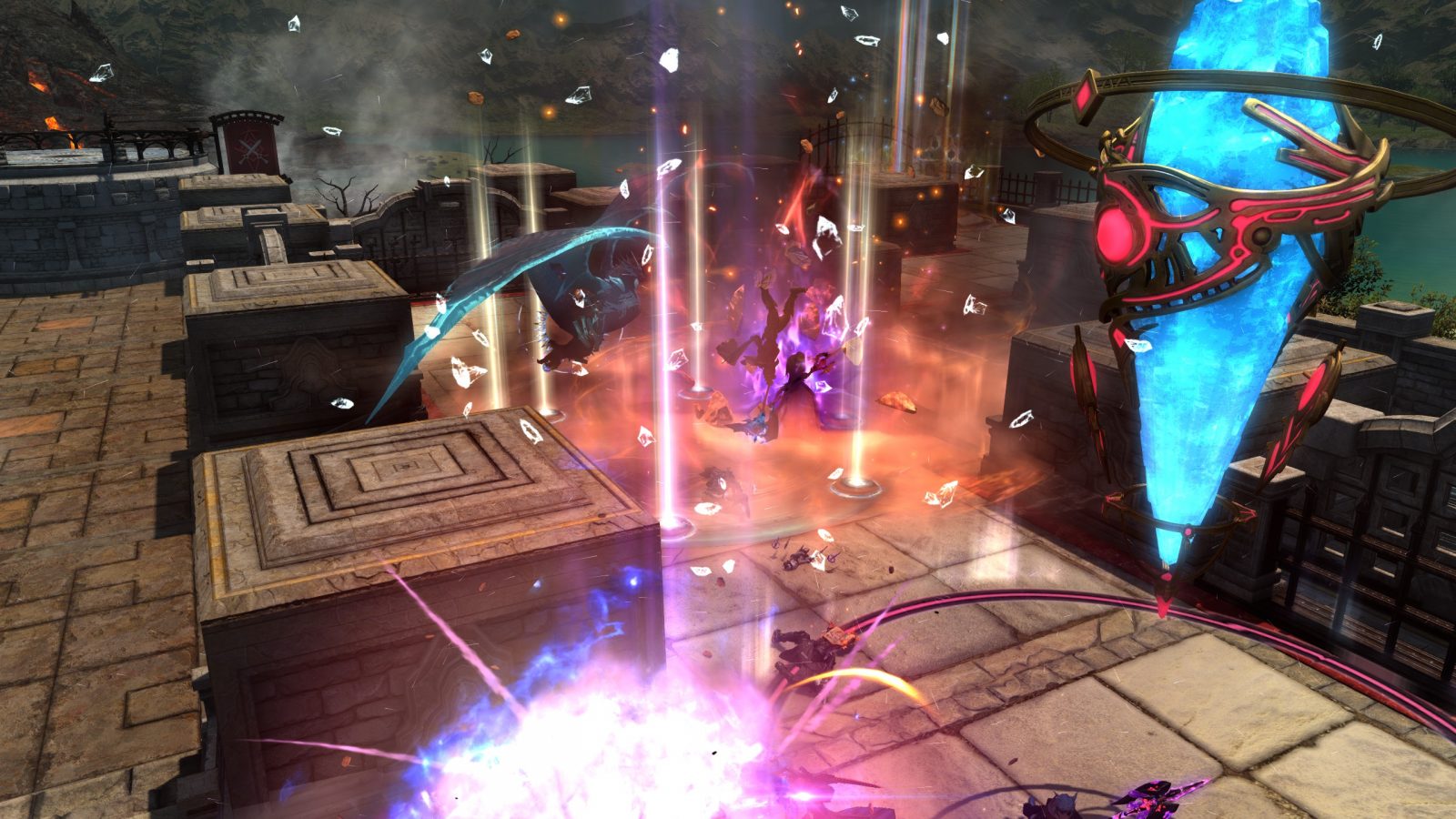 Shockingly, the place I spent the most time in is the new PVP mode, Crystalline Conflict. If you’ve played Team Fortress 2 or Overwatch, you’ll feel right at home here. Two teams of five compete to move a crystal to the opposing team’s side before time runs out. You move the crystal by standing under it, and whoever reaches the goal or gets the furthest wins.

I’ve enjoyed this type of mode greatly in other games, but part of what makes it work here is the PVP rework, which streamlines each job. I’ve played almost exclusively as a machinist so far, and it’s been a ton of fun. They have one basic attack, which starts off with a cast time but becomes instant and more powerful for a time after five shots. Using a shotgun, you can even knock enemies back to get a crowd away from the crystal. MCHs’ come with two charges of a special attack as well, which cycle through four familiar abilities like Drill, Bioblaster, and Chainsaw. Additionally, these can be augmented by using a charge of another ability, which also has two charges. Lastly, they can place a turret on the battlefield which will damage any enemies who enter its range. It’s a versatile job that does high damage while providing utility if you play your cards right. 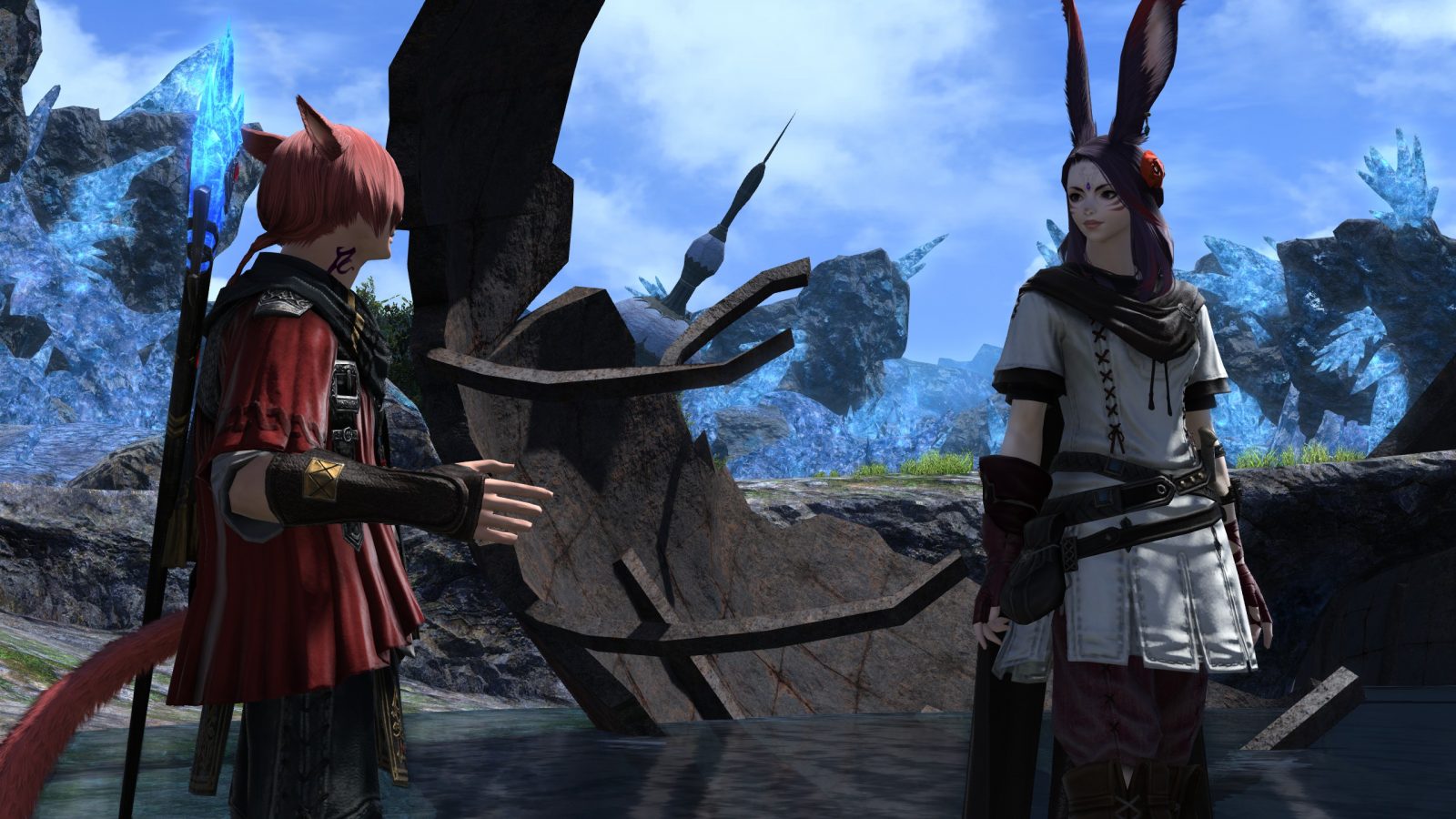 Since every job is essentially a DPS here, everyone has some universal abilities to defend and heal themselves along with a personal limit break. You can use MP for some instant self healing or chug a potion with a lengthy cast time to restore all your bars to full. When things get dire, you can activate a guard stance to reduce damage for a short time. The mode doesn’t feel entirely balanced yet, with some jobs being more useful than others and you get stunned to death very frequently, but personally I’m still going to be playing it almost daily for fun and the myriad rewards you can earn.

Speaking of rewards, you can use the currency gained through Crystaline Conflict to purchase cosmetics for the new Adventurer Plates. These are essentially calling cards or portraits you can customize with frames, poses, and backgrounds. People have gotten incredibly creative with these, and they’re (mostly) a joy to see. Currently these only show up in CC or when specifically examining someone, but I hope they pop up more frequently in the future such as when commending someone after a dungeon. The feature is still in beta technically, but it allows people to add a bit more personal flair to their profiles. 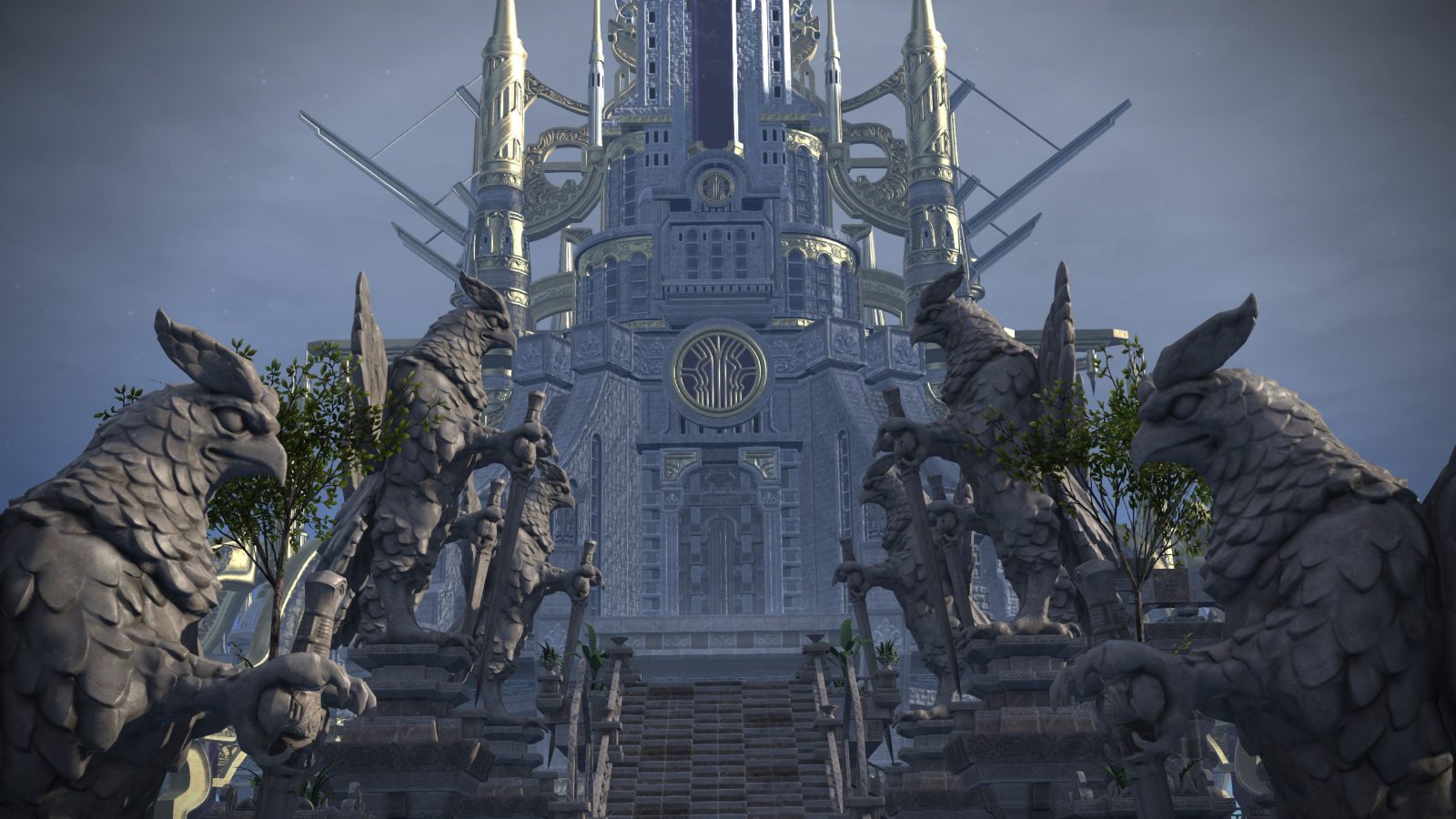 If you’ve been paying attention to the community, there’s an elephant in the room we’ve yet to discuss: housing. 1.6 adds Ishgard housing and reworks the “first come first served” system of the past into a lottery. Unfortunately, that lottery often does not work, choosing no winner even if several people enter, and when it does work it requires the losers to return to the plot to get their gil back. While having no winner is clearly a glitch, requiring people to go see a house they just missed out on feels like a cruel walk of shame. I already have a personal plot in Limsa, and housing is a fun system more people should be able to engage with.

Overall, this is a great patch with some fantastic new content, but it does have a few glaring flaws that will hopefully be fixed quickly. PVP is the highlight for me, but the dungeon and Alliance Raid are a ton of fun. If you haven’t already, I would also recommend checking out the rework of the Ultima Weapon fight, which is much more fun now. While Endwalker ended on a high note, Newfound Adventure has ushered in what looks to be a very bright future for the game.

David is the kind of person to wear his heart on his sleeve. He can find positives in anything, like this is a person who loved Star Fox Zero to death. You’ll see him playing all kinds of games: AAAs, Indies, game jam games, games of all genres, and writing about them! Here. On this website. When not writing or playing games, you can find David making music, games, or enjoying a good book. David’s favorite games include NieR: Automata, Mother 3, and Gravity Rush.
Related Articles: Final Fantasy XIV: Endwalker, MMO
Share
Tweet
Share
Submit