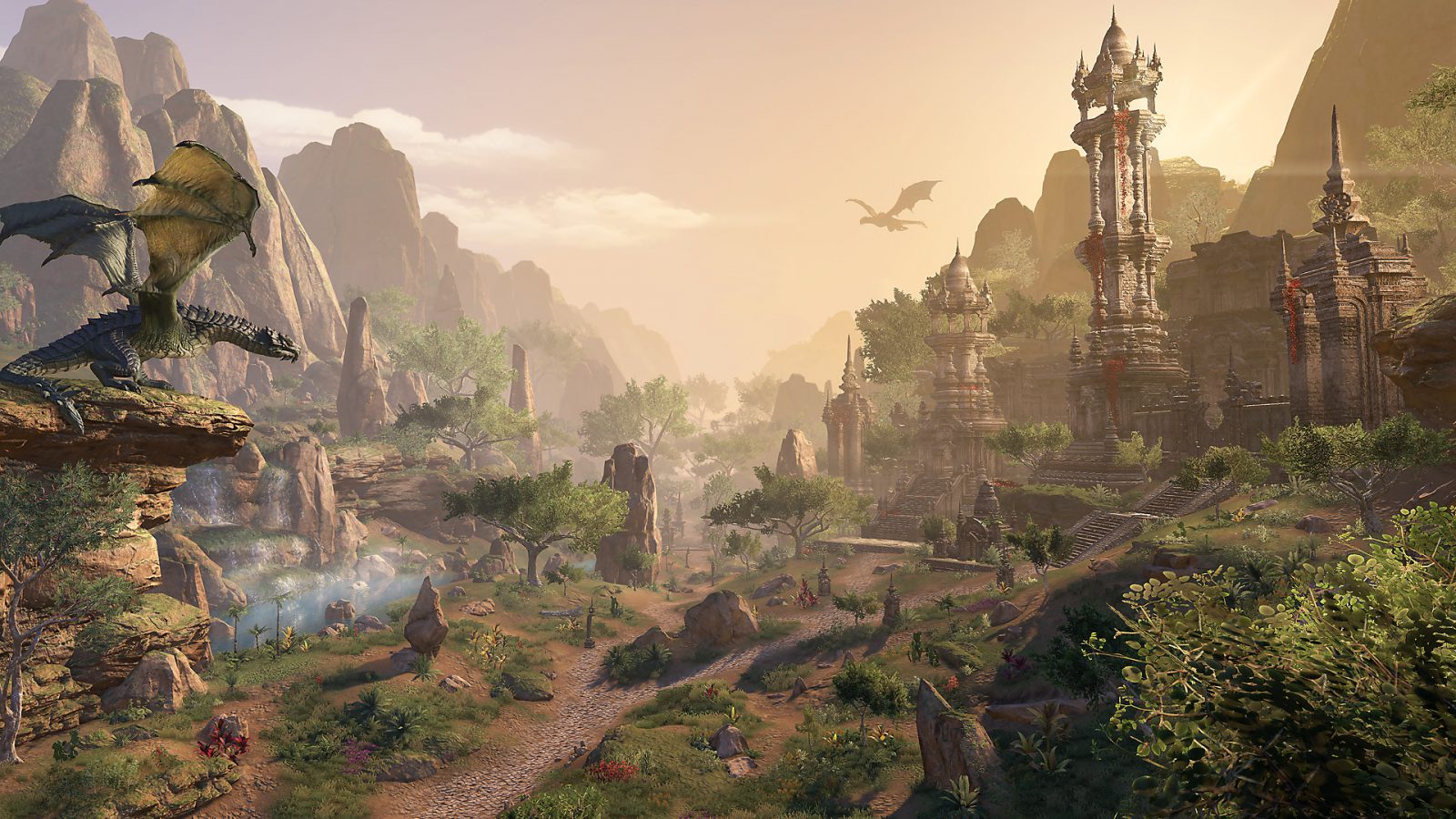 Elder Scrolls Online had an early access launch this week for its newest chapter, Elsweyr, and I’m thrilled to give my first impressions. This expansion showcases a huge new zone filled with quests, the Necromancer class, a new 12-man trial, dungeons, and LOTS of dragons!

Diving right in, I made a Breton Necromancer, and have been keeping myself busy trying out the different specializations while questing through the zone. Elsweyr is home to the Khajiit, and so far I’m loving the story, which in true ESO fashion is thick with conspiracy. I’ve been playing for two days and am not even halfway through the new zone, while taking my time to enjoy every minute of it. I’ve been hitting up all the side quests, delves, and mini bosses along the way, and have myself a nice little starting gear set.

My main character in Elder Scrolls Online is a Magicka Sorcerer, and while I have not stepped into trials or anything too challenging, I do have a decent feel for the game. So far, the Necromancer class feels new and fresh. I am close to hitting level 20, and will probably go into a Magicka DPS specialization, with a healing off-spec for when I play with my friends. I have felt like I can keep myself alive fairly well, while doing a decent amount of DPS with the limited number of abilities you get in the beginning. It’s definitely a class I will see through to 50 and into Champion levels.

The most exciting thing I wanted to talk about is the addition of dragons. I knew they were in the expansion, but didn’t realize they were in the starting zone for some reason. They are basically little mini bosses that fly across Elsweyr, and require several players to take down. ESO gave me quite possibly one of the most epic experiences I have had in any game.While minding my own business on my newbie Necromancer, I saw a HUGE shadow on the ground. When I looked up I saw a massive dragon flying right overhead. It landed not far from where I was questing, so I ran over and dozens of other players were already there engaging it. My first dragon took close to five minutes to kill, and every moment was exhilarating. Despite all the people around and all of the spell effects, I did not experience any choppiness or frame rate loss.

Bethesda did a fantastic job on the design for the dragons, both graphically (they are very menacing), and mechanically. I’ve now fought about ten dragons, and each of them have slightly different abilities and are very unpredictable. There are usually about two or three up at any given time, and generally spawn about every ten to fifteen minutes. There is little room for forgiveness with their attacks, one wrong step and you’re toast, so stay on your toes!

Elsweyr also brought some new crafting recipes, and the dragons have been dropping quite a few new furniture and home goods recipes. Two new Elsweyr zone exclusive armor sets, Crafty Afliq (Magicka) and Darloc Brae (Stamina/Sneak), drop very frequently from dragons, and you should have no issues getting yourself a decent set of armor to help you quest through the new content.

I’m loving the new chapter of ESO, and can’t wait to check out the rest of Elsweyr to see how the main story plot ends. The zone is beautiful, the music, as always, is breathtaking, and the dragons make it feel very epic. Stay tuned to get our whole review with a score, once the game officially launches on June 1st!

Elder Scrolls Online: Elsweyr is still in pre-order with lots of in-game goodies. Head on over to their website to find out more!

Holly Hudspeth is a best-selling author living in Fort Worth, Texas. She has six published books to date; The Skyy Huntington Series, which is an epic dark fantasy adventure, and One Small Detail, a stand-alone medieval fantasy. Holly also enjoys writing fan fiction based on her avatars from games such as EverQuest and World of Warcraft. Her first major purchase at the established age of nine was the NES, and she has been gaming ever since. You can find her leading raids two nights a week in World of Warcraft, goofing off with friends in Overwatch, or playing League of Legends with her husband. She enjoys fantasy games, RPGs, and MMOs.
Related Articles: MMO, The Elder Scrolls Online: Elsweyr
Share
Tweet
Share
Submit