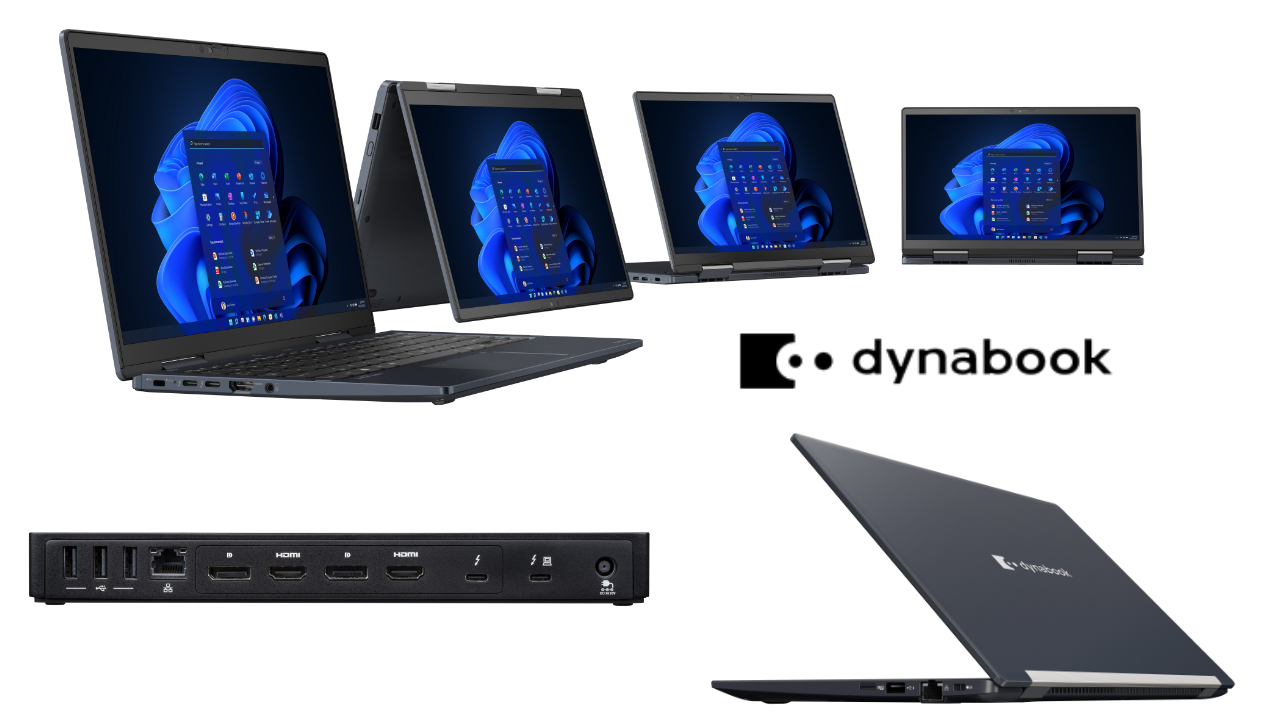 Dynabook might be a new name for you, but their pedigree goes a long way back. I got to sit down with the team for a sneak peek at their Portégé laptops ahead of their announcement this morning. Before we get into that, however, let’s take a look at who Dynabook is, because their legacy is longer than you might know. It carries with it a venerable name, as well as an incredible market advantage that few can match. 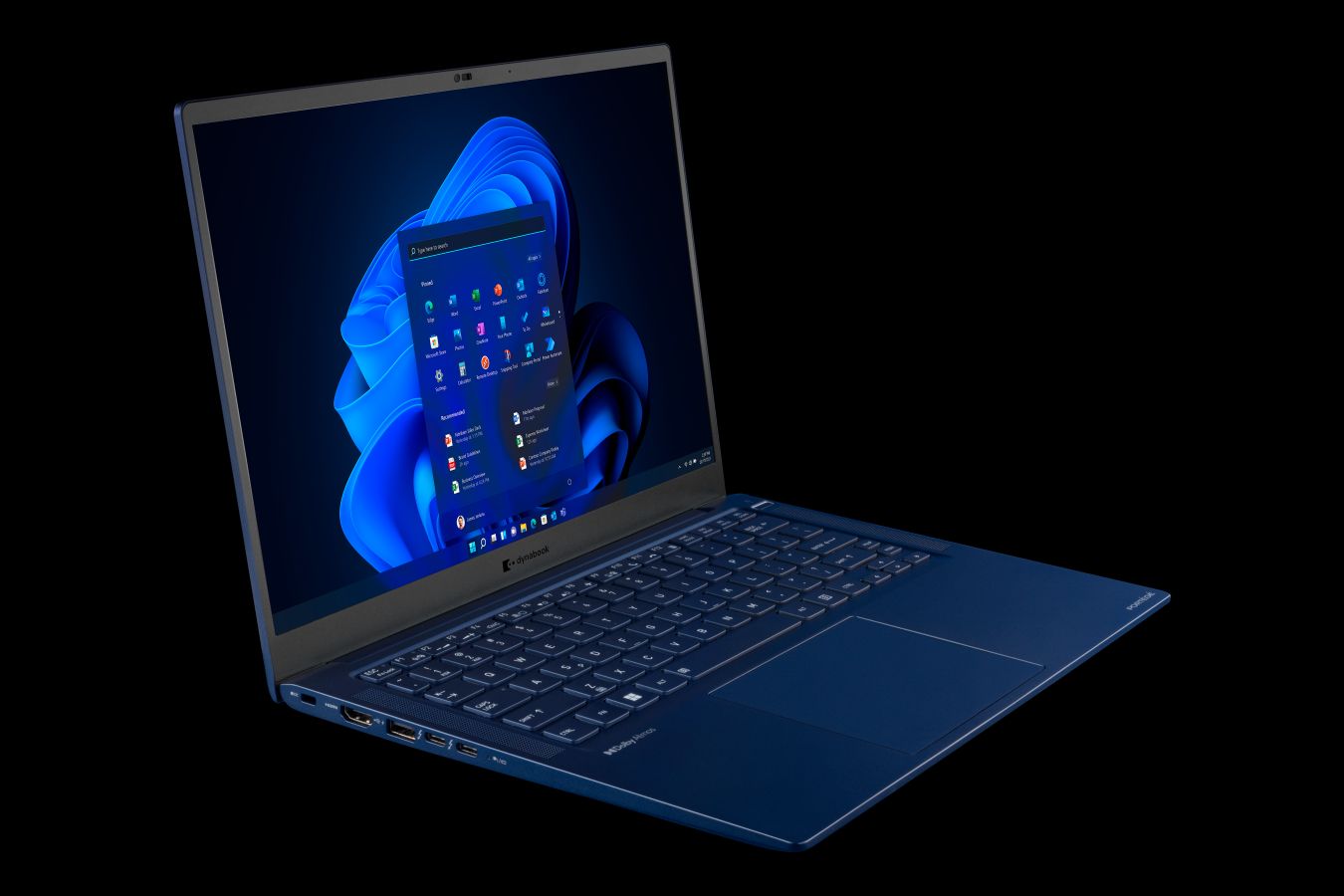 Dynabook Americas Inc. was once a part of veteran Japanese electronics manufacturer Toshiba PC Company. With 145 years of experience at their back, 35 engineering veterans established themselves as a fresh company with a powerful advantage that few others can match – vertical integration. Vertical integration is the concept of having a direct relationship with the people in your supply chain that provide your critical parts. In this case, Dynabook is fully integrated with chip powerhouse Foxconn in Taiwan. This allows them to access the chipmaker’s technologies directly, enabling Dynabook to slim their time to market from the current standard of about 4 to 6 months down to just 4 to 6 weeks. This allows them to pivot their product lines quickly to match what the market needs. Their largest test of this came as industry behemoths like Dell tried to slowly turn their ship to address the COVID pandemic. Dynabook was able to instead have products ready to go in just over a month. They were also able to use this to help one of the largest school districts, Orange County Unified in California, shift almost instantly to virtual schooling. It’s an incredible advantage honed during one of the most challenging years of our lifetimes. 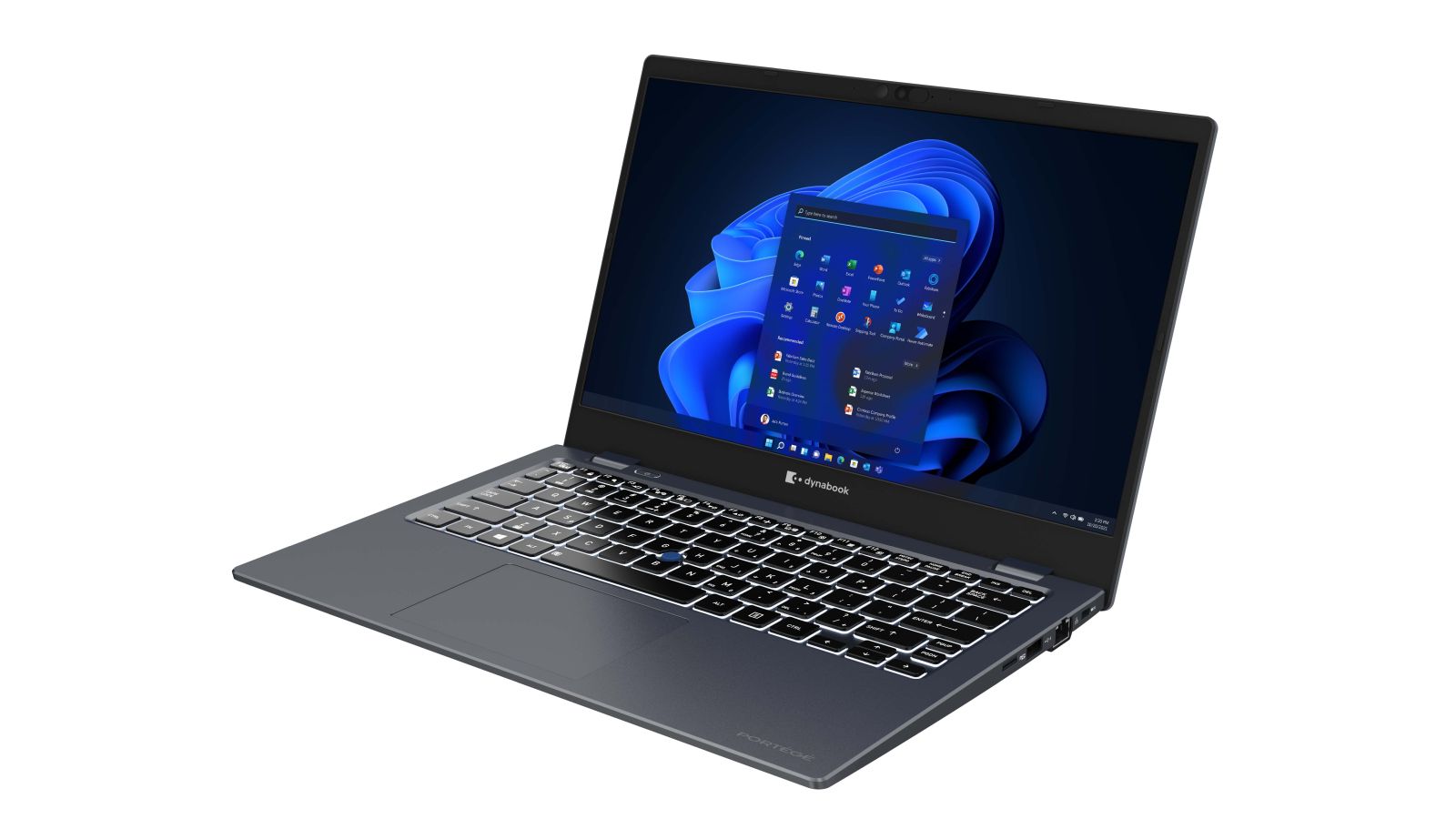 Before we get into the team’s latest product lines, let’s answer the question “What’s a Dynabook?” Focused on small and medium business, and the people who serve them, the Dynabook is a flexible laptop built with an emphasis on achieving the lowest possible failure rate. When you are a small business and don’t have a large IT staff, controlling downtime and hardware costs can be critical. Without spares, you need your devices to work all the time. Folding in lessons learned from Toshiba’s Easyguard tech, Dynabook has built some of the most resilient and high-reliability hardware on the market. They are confident enough in that claim that their laptops ship with either a 1 year or 3 year warranty. Not enough? Well, what if I told you that is 1 or 3 years of on-site warranty? That’s a whole lot of faith.

History aside, Dynabook has a few products up their sleeves for 2022, with the first three being revealed today – a Hyperlight Portégé X40L-K, Portégé X30L-K and Portégé X30W-K – the latter two being a refresh of models released in 2021. These Dynabooks are also some of the first laptops utilizing Intel’s 12th Gen Core P-Series 28W processors, as well as LPDDR5 6400 memory (previous models were using DDR4 3200), and Windows 11 Pro. In the case of the X40L-K, X30L, and X30L, they also sport WiFi 6E and integrated Intel Iris Xe GPUs, as well as host of other high-end components. 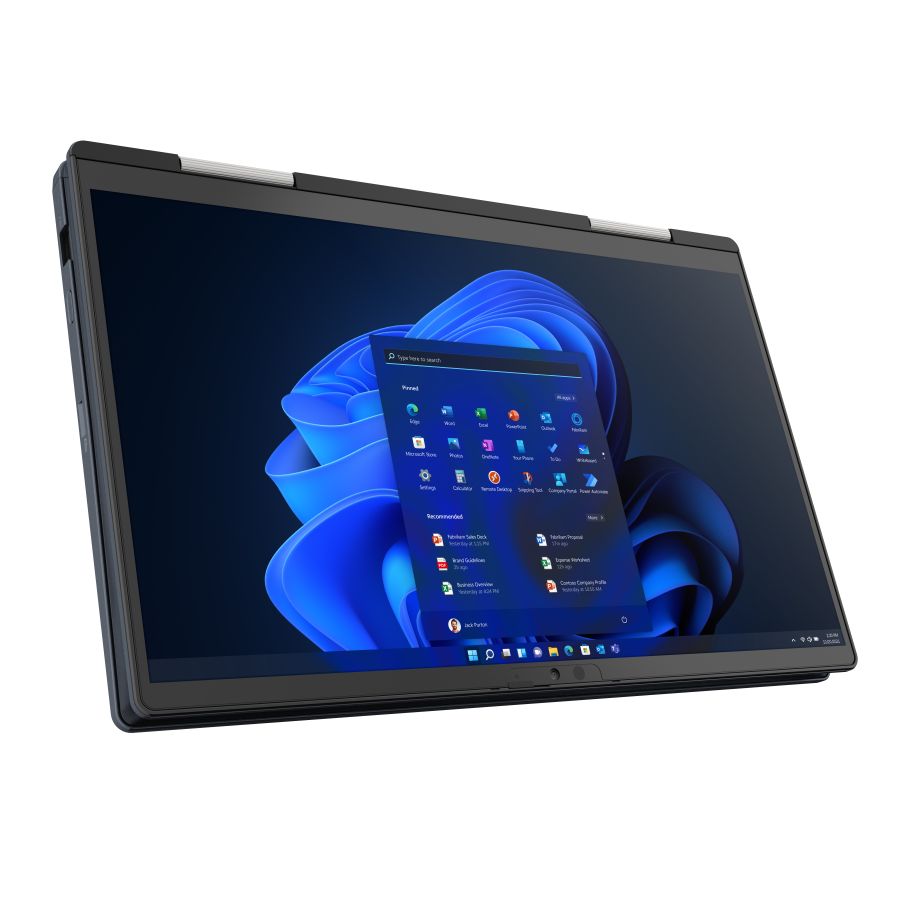 These 2-in-1 devices are incredibly versatile.

The Portégé line is the lightest and thinnest of Dynabook’s products, with the X40L 14” weighing just 2.3 pounds and 15.9mm thin. To ensure it’d hold up, the device is also MIL-STD-810H compliant, using a magnesium alloy chassis to make it even more durable than the aluminum chassis that have become the norm.

Beyond the processor and memory, the Portégé line also has connectivity and support for up to four external 4K displays, with Thunderbolt 4 support, WiFi 6E, Gigabit LAN, and charge-capable USB-A ports. There is no shortage of ports on this device, nor is it short on ways to keep it charged without needing a bunch of extra cables. 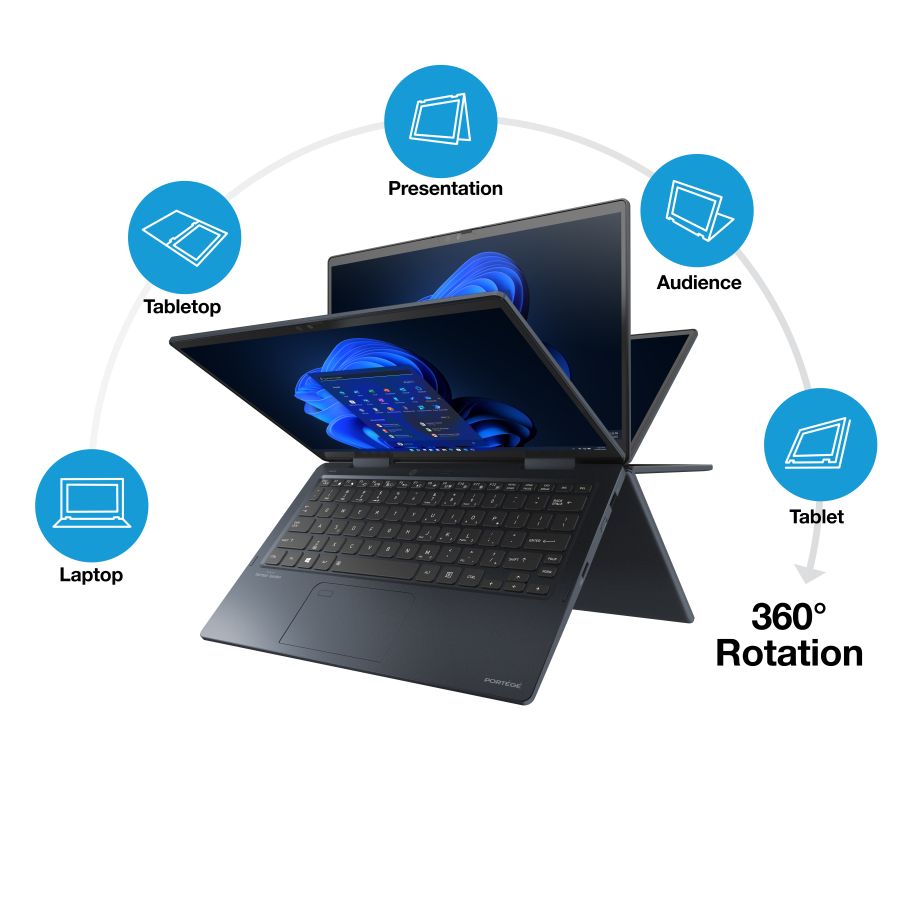 The refreshed Portégé X30L and X30W really caught my eye. The former is a 13” ultra-portable laptop, and the X30W is a 2-in-1 convertible. Despite being impossibly small and light, these two devices sport the same 28W P-series 12th Gen Intel processors, LPDDR5 memory, WiFi 6E, and integrated Iris Xe GPUs.

All of these devices from Dynabooks carry with it the same DNA as their Toshiba predecessors, but with a handful of features that make it uniquely their own. For example, all of these devices open a full 180 degrees, with the 2-in-1 opening nearly 360 degrees to fold over entirely. They also sport a swell underneath to maximize airflow, a 85-percent screen-to-lid ratio, Eyesafe 16:10 IPS displays with HEV filtering, four speaker Dolby Atmos audio, and 65 Wh batteries as possible choices, based on the model selected.

Regardless of which device you select, Dynabook also has a brand new dock to facilitate that four-monitor setup I mentioned earlier. A versatile platform built on Thunderbolt 4, the dock features two HDMI 2.0 ports, two DisplayPort 1.4 ports, and a Thunderbolt 4 connection to bring it all together. This means you can drive four 4K displays with a single cable to your laptop, or a single 8K display if you roll at that resolution. Additionally, the dock has Gigabit LAN, four USB 3.2 Gen 2 Type-A ports, and two USB Type-C 3.2 Gen 2 ports to round things out. It also has an integrated SD card reader and combo 3.5mm audio jack. Best of all, it can also charge your laptop with a whopping 90W of pass-through power. Like the laptops themselves, the Thunderbolt 4 Dock includes a 3 year warranty, with a price of $349.99. 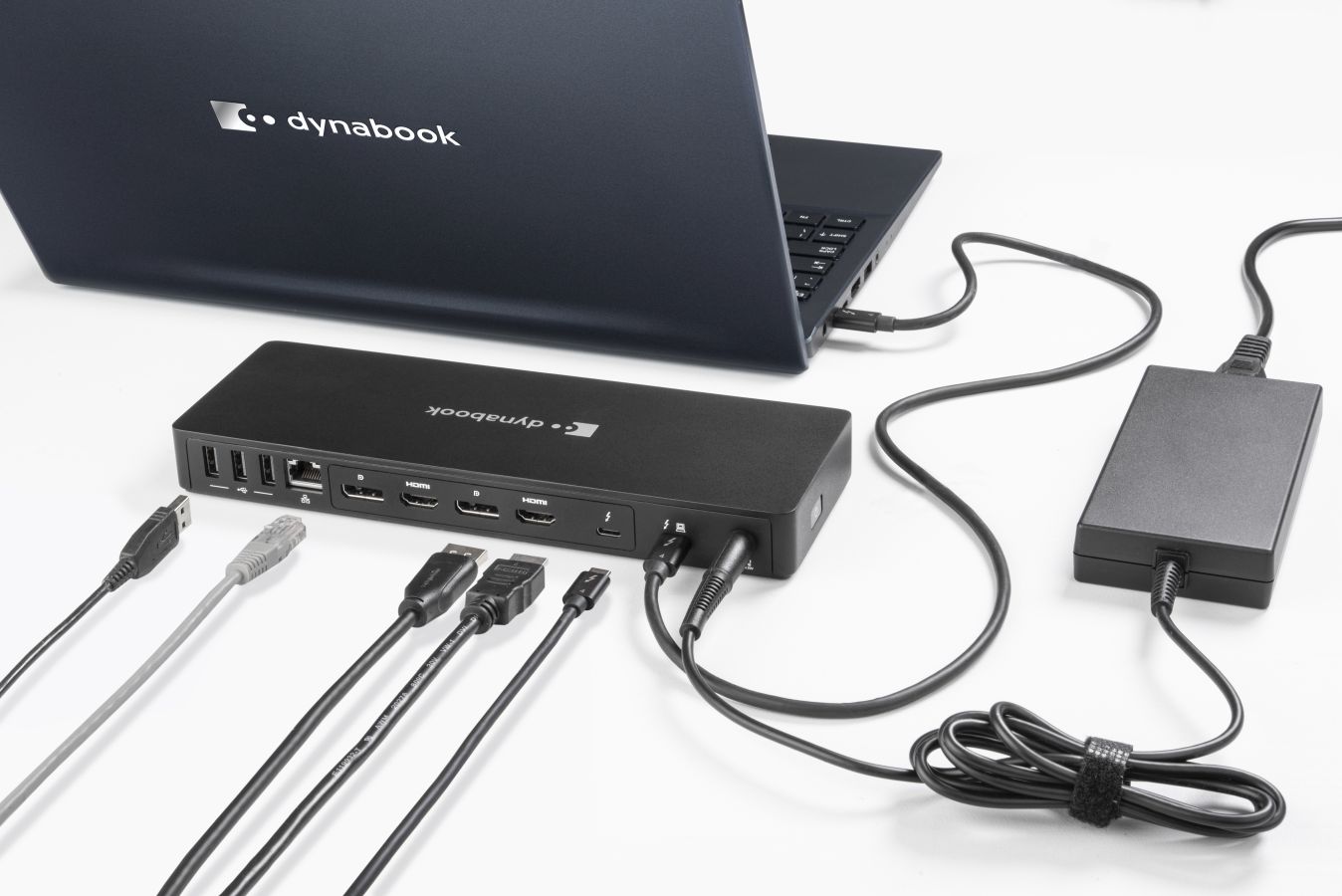 Stay tuned to GamingTrend.com for our full hands-on review of these and more as Dynabook slowly reveals their entire 2022 line of powerful laptops and 2-in-1 devices.