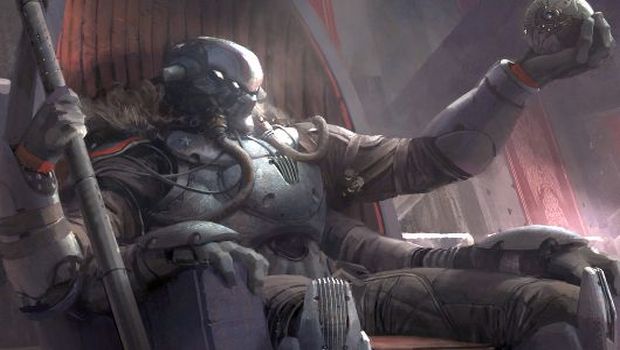 So Destiny launched with over $500 million in sales, the largest launch of a new IP in history.  Since it’s unlike most other games, we figured we’d take our time to dig in deep and make sure we properly review this new chapter in Bungie history.  Below we are weighing in with our first impressions that’ll eventually culminate with a formal review.  Stay tuned while we discuss Space Wizards with a straight face.

I was one of the lucky ones to get into Destiny a day early.  Shockingly, the first person other than myself that I saw online was already level 20.  How do these people do that?!  I had another engagement yesterday, but I tackled the missions that were unveiled during the Beta, catching up with the final moon mission under my belt.  One of the things I noticed is that some of those missions received a bit of a tuning.  Some corners of the world are a little tougher, some are a little easier.  In the end, it feels like a more challenging and even experience thus far.  I’m looking forward to re-engaging this evening to see some new content.   There is one thing that cannot be denied – the music in this game is absolutely unparalleled.

Destiny’s a hard game to peg down. I’m absolutely loving Destiny “the game.” With RPG-lite upgrades and some friends to hang with, the game’s combat has been highly satisfying. Perhaps the moment Destiny “the game” really crystallized for me was when I was rolling with a buddy, just taking on random missions, and a giant robot tank thing warped in. We looked at each other, said “we got this,” and went to take it down. Unfortunately, we got beat down quite a bit, but luckily a couple other random players who were in the area hopped in and helped us out. It was thrilling, and I can’t wait to have more moments like that.

Destiny “the experience,” however, is a completely different story. In typical Bungie fashion, the set-up of the game’s narrative is waaaay more interesting than the actual story the game tells you. Peter Dinklage talks about wizards and arrays and names are dropped without any context and I’m just left in a daze, wondering if I’m supposed to care about any of it. I want to feel enveloped in this huge world, and I want to care about the events that happen, but I just… don’t. You’d think that a story about massive, life-altering orbs, alien invasions, the fall and subsequent re-emergence of humanity would be hard to screw up, and yet, here we are.

I’m going to stick with it, because I actually want to play it. It’s fun, but I just wish as much effort was spent on telling a decent story as was on the actual gameplay, because something just feels lacking. I’m hopeful about Destiny, but it hasn’t quite clicked with me yet.

Since it’s official announcement at the Sony PlayStation 4 event back in February 2013, Destiny has been somewhat of an anomaly regarding its messaging and reception around the the gaming cosmos. Many early questions were, “What is it?” and many questions today are still “What is it?” Most gamers and game journalists seem to not know what to make of Destiny: Is it an FPS? Is it an MMO? An RPG? It’s all of them, and it’s none of them. It’s something new; something we haven’t seen before … and that’s the best thing about Destiny.

Much of the criticism of the game has come from people not understanding what genre the game falls under. There is some incessant need to pigeonhole the game into a category because it makes it easier to compare with other games of the like, and, therefore, judge. As we’ve learned throughout history, not just with games, but with all things; people get upset when they see something is different or they don’t quite understand it. To not understand something would be admitting that they (human beings) don’t know everything, and that just doesn’t sit well with our egos. My suggestion to us would be to make Destiny whatever you want it to be. Don’t worry about what genre it is so that you can tag it properly on your review blog; just play the game because it’s fun.

And fun is exactly what Destiny is. It’s been a long time since a game has had me thinking about it while at work, itching to get home and take down that next Strike mission boss, cash in my next rare engram, or throw a dance party with my fireteam on the Moon. My Guardian is currently a Level 17 Warlock and I’ve had a great time getting him that far. After playing the beta a ton back in July, I was glad to see that the other planets offer a much different aesthetics. The lush jungles and bright blue pools of Venus, and the deep red dunes of Mars are incredibly pleasing to the eye. I will say I am a bit disappointed in the exploration aspect of the game so far. There are a ton of nooks and crannies to adventure into, but almost none of them bear any loot; too many times I’ve fought my way past over-leveled enemies in an off-the-beaten-path cave to come up with absolutely nothing.

The best part of the game has been the Strike missions. It took my fireteam and I a hard-fought 45 minutes to take down a massive Ogre on the Moon, and we loved every minute of it. Constant communication, ammo management and coordination were keys to our success, and, despite the in-game rewards not being that great, the sense of accomplishment afterwards was enough.

I’m excited for more of Destiny. Not just the Strikes and loot-grabbing that has kept me engaged to this point, but all that the future holds as well, with the post level 20 content, like legendary items, high-level raids and PvP clan battles. Destiny has a lot to offer to many different kinds of gamers, and it’s this cornucopia of content that I think will keep players coming back time and time again. As much as people like to criticize Activision for not having enough IP or not taking enough risks, they’ve got yet another blockbuster on their hands. Someone over there is obviously doing something right, and as long as their games are as fun as Destiny, I’ll keep playing them.

As someone who works in the games industry, I’m typically not angry when I pay money for a game I’m not enjoying. This is mainly because I like to be knowledgeable about games that are big, whether I like them or not. An informed negative opinion is better than an uninformed one, right?

However, when playing Destiny I find myself gritting my teeth as it so confidently waxes on about its fiction, as if its various abstract terms it uses to describe its lore actually meant anything in-game. When we all gave our impressions of Destiny’s beta, I expressed concerns that the way the game appeared to be presenting its world and story appeared incredibly stunted. Now that I’m playing the final game and it turns out that Destiny doesn’t just not exposition its world in any meaningful manner, but segregates nearly all of its world building to Bungie’s website, I can’t help but laugh at how comically shallow this game is, and laugh harder at the game’s own delusions of grandeur.

I’m not done with the game, so there’s obviously a chance that somehow Destiny will prove to be the epic that Activision and Bungie tried to tell us it was for years. But right now, Destiny just feels like a sterile and laughable imitation of something that could have been special, but ended up feeling completely soulless.

Stay tuned as we iron out our full review of the game, but feel free to chime in with your thoughts in the comments!

Ron Burke is the Editor in Chief for Gaming Trend. Currently living in Fort Worth, Texas, Ron is an old-school gamer who enjoys CRPGs, action/adventure, platformers, music games, and has recently gotten into tabletop gaming. Ron is also a fourth degree black belt, with a Master's rank in Matsumura Seito Shōrin-ryū, Moo Duk Kwan Tang Soo Do, Universal Tang Soo Do Alliance, and International Tang Soo Do Federation. He also holds ranks in several other styles in his search to be a well-rounded fighter. Ron has been married to Gaming Trend Editor, Laura Burke, for 21 years. They have three dogs - Pazuzu (Irish Terrier), Atë, and Calliope (both Australian Kelpie/Pit Bull mixes).
Related Articles: Destiny
Share
Tweet
Share
Submit