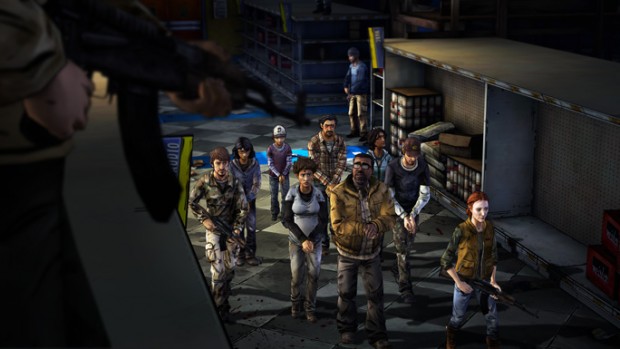 Season Two of TellTale’s The Walking Dead is shaping up to be quite the excellent package of narrative delight. The game is more visually appealing than the first season, and is less glitchy. It also hasn’t missed a storytelling step.

Most importantly, though, it looks as if the move to thrust Clementine into the spotlight is paying off.

Episode Two: A House Divided brought us out of the home that Clementine stumbled into and into the wilderness looking for a new place for the group to hang their hats. Paranoia results in the unfortunate death of a seemingly friendly newcomer during the travels, and the ripples are felt throughout the remainder of the episode.

At this point in the story, TellTale is doing an excellent job of making every situation feel dangerous. During any altercation, you’re ready for any character to die. It might not happen, but the seeds of doubt are sown, and no one feels safe. This gives the experience a true sense of unpredictability — which is paramount to the unnerving sentiment that makes this game such a unique experience.

Clementine is shedding her naivety with haste. Other characters still view her as a little girl and feel compelled to sugar-coat the dangers around every corner, but it no longer works on her. Dispensing with rose-colored glasses, she’s always prepared for what’s to come. This is in stark contrast to the girl that was left in the first season, unsure how to proceed without Lee’s guidance.

Michael Madsen also debuts in Episode Two as William Carver, who instantly becomes an imperative antagonist. Madsen’s voice acting in the role might be the best performance of the series thus far. His character is violent and unpredictable, and Madsen’s smooth-yet-commanding voice compliments the fickle personality perfectly.

The scenario makes a steady transition into Episode Three: In Harm’s Way. The group finds themselves brought into a large complex that is presided over by Carver and his followers. The visuals are immediately striking; the indoor location showcases the game’s lighting, giving additional depth to every character and object. These are the most attractive moments of the series to date.

Carver’s character becomes even more compelling in this episode. He’s brutal and unforgiving, yet you’re able to empathize with his intentions. It seems that he truly believes that his actions are justified by need, and that his community would fail without such extreme measures. As time goes on, though, those that make up his inner circle appear less and less convinced by his reasoning. The tension is high from the start, and doesn’t let up through its conclusion.

Clementine is quickly coming into her own, as well. In this episode, she is counted on for several tasks of utmost importance — and for once, no one hesitates to recommend her for the jobs. This is finally when those around her do not look and see a little girl, but a fully capable human being that they’re lucky to have in their group.

The climax of this one is not to be missed. In Harm’s Way is capped off by a quick decision with Clementine that feels potentially more impactful than the majority of such moments throughout the series. I’m still thinking about my choice, wondering if I made the right one. Naturally, I’m dying to see where it leads.

In Harm’s Way might be the best single-episode scenario that The Walking Dead has presented so far. The weight of every decision was palpable, and the implications of the events feel important. It’s consistent in the way that the series has progressed since its inception. Everything feels more refined and more mature as the pages turn. The game is following the pattern of a great TV series that doesn’t hit its full stride for a few episodes, or even a few seasons. I don’t think that we’ve seen the best that TellTale has to offer in this setting just yet.

I've been gaming since my dad made the bad decision of buying me a Nintendo when I was four years old. Every day I'd find myself with my face glued to a TV screen, punching away at buttons, getting furious with Bowser, Dr. Wily, and those freakin' birds in Ninja Gaiden. Since then I have failed to get my parents to play any board game with me, I sold my full copy of Earthbound with box and guide for $300 to some dude in Austria for rent money, and I still believe in Nintendo even after all these years.
Related Articles: The Walking Dead: Season Two
Share
Tweet
Share
Submit