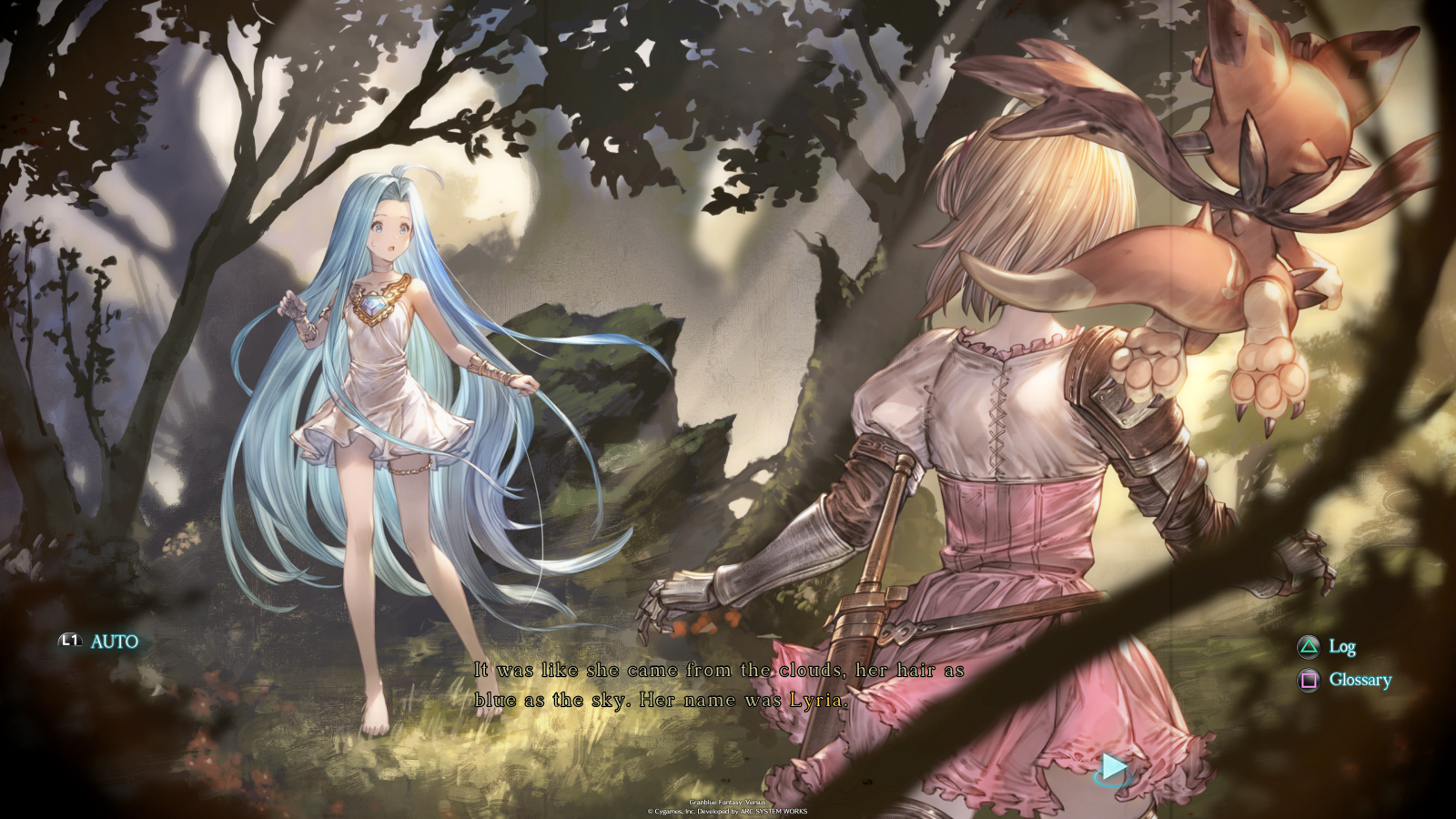 When I reviewed Granblue Fantasy Versus earlier this year, I mentioned how I didn’t appreciate the day one DLC and that one of those paid characters, Narmaya, seemed a bit overpowered. Now that all four additional characters have been released and I’ve spent some time learning each of them, I can say that Narmaya is still definitely overpowered, but she’s a heck of a lot of fun to play as. While I’m by no means an expert in fighting games, I’ll share my overall impressions of each character and how they play after spending around one week with the fighters pass. Each character section is accompanied by a video showing off their Arcade mode, so as you read I would recommend watching that so you can get a better idea of their strengths and weaknesses.

Narmaya is a sleepy katana wielding samurai, who’s as adorable as she is badass. Her main gimmick is that she can change stances using the X button, sheathing or unsheathing her blade and gaining access to a total of 8 special moves with both stances, double that of every other character. When her sword is sheathed, referred to as Dawnfly stance, she becomes more defensive and gains access to specials that follow suit. Her neutral and down specials, Dawnfly: Setsuna, are both ranged slashes, the release of which can be delayed by using the Triangle button or can become more powerful with the Circle button, though the latter will use both cooldowns at once. Her forward special, Dawnfly: Absolute Horizon, is an invincible rising slash which, when using neutral or Triangle, can’t be blocked by opponents in midair immediately after start-up or, when using Circle, can’t be blocked by airborne foes entirely. Finally, her backwards special, Dawnfly: Transient, is a forward dash that can even move through foes when using the Triangle or Circle variants.

In Narmaya’s more offensive stance, Freeflutter, all four of her specials change and have separate cooldowns. Her neutral and down specials become close range sword swings, called Freeflutter: Kyokasuigetsu. The number of hits in each combination can be changed by using the Triangle or Circle inputs, though again the Circle variant will use both cooldowns. Her forward special is still a rising slash, but instead of being invincible she performs a short parry before attacking called Freeflutter: Mugenkagura. Finally, her back special, Freeflutter: Crescent Moon, has her jump into the air and perform a circular slash, with her jump arc changing height and trajectory with the Triangle and Circle versions respectively. Crescent Moon can also be performed in midair, allowing Narmaya to more easily chain into a combo upon landing.

While normally swapping between Dawnfly and Freeflutter has a short animation, following up any of Narmaya’s specials or attacks with the X button will skip these animations entirely. This, combined with her huge amount of special moves, makes her a very quick character with a versatile set of attacks at her disposal. She’s a ton of fun to use and just looks really cool at all times with the samurai aesthetic and the fluidity of all her moves being able to be chained together. In fact, she’s so much fun to use she’s my new main, replacing Charlotta.

Next up is Soriz, resident punchy boy. He’s powerful and can take a hit, but fairly slow compared to other characters. His neutral special, Impact Knuckles, is a dashing punch attack, the range of which can be altered with Triangle or Circle. It’s good for closing distance or knocking an opponent away. Roundhouse Fang is his forward special, which is an upward kick; it can be used as an anti-air or to just knock an opponent off their feet. His down special is Rock Smash, in which Soriz punches the ground to unleash a pillar of fire and guarantee that afterwards he will be able to move before his opponent, even if the attack is blocked. For his back special, Punch the Stars, he unleashes a flurry of hits and advances forward with the Triangle and Circle variants. As his unique action, Muscle Fury, he gains armor for a short time which can be extended by holding X. During this move, damage taken will reduce and also increase a number just below his SBA gauge, He can also end Muscle Fury with a flexing attack that can greatly increase said gauge. Soriz also has three Skybound Arts; he has the standard quarter circle forward attack, but his X super instead makes him go into Macho Ultimatum where he… takes off all his clothes by flexing, becomes more powerful and sturdier depending on that number below the SBA gauge, and gains access to new skills. Macho Ultimatum can be ended with another Super Skybound Art with a devastating four hit combo.

Soriz’s playstyle is all about getting up close and personal with your opponent, no matter what attacks they dish out at you. All of his specials either gain new properties or, in the case of Punch the Stars, new follow up attacks when in Macho Ultimatum. While he can only use Macho Ultimatum at 30% HP, he becomes much stronger in this “weaker” state, so opponents will want to finish him off quickly. Overall, he’s a great addition to the roster as a hard hitting character with little regard for defense.

Djeeta is one of the two options as the protagonist of Granblue Fantasy, her counterpart being Gran. As such, she plays very similarly; think of her as an echo fighter of him, to use Smash Bros. terms. She’s got Reginleiv as her neutral, though Djeeta can also choose to charge the attack. Her forward special is also Rising Sword, which seems to be exactly the same as Gran’s. It’s an invincible, rising attack which can be modified by using Triangle to be unblockable or attacking twice using Circle. Her most different attack is Vorpal Blade, her down and back specials which can follow each other up if not on cooldown. Whereas Gran’s specials are more ranged, Djeeta’s focus is on consecutive close ranged strikes. She also share’s Gran’s SSBA, but her SBA is entirely different, and much cooler if I may say. Eternal Ascendancy is an invincible dashing attack that, when it hits, performs at least ten follow up attacks for tons of damage. If you’re already comfortable playing Gran, but wish he hit harder and was all around more fun, Djeeta’s your girl.

Last stop on the DLC train is Zooey, who’s an entirely new (Primal) beast to the Granblue Roster. She’s a bit of a puppet master character; she can summon one of her pet dragons to perform one of three attacks, consuming part of her dragon gauge filled by using her unique action. All three dragon moves are used with the variations on her neutral special. Without changing it, the dragon will perform Immortal Thrust, a forward charging attack. The Triangle version will spray a pillar of fire onto the ground which can hit multiple times. The final Circle attack will cause your dragon to shoot multiple, long range beams across the stage, which is very useful for putting pressure on a far away opponent or holding them in place. Zooey isn’t exactly a puppet character, so all of those dragon moves will start wherever Zooey is standing and cause her to perform an animation which can leave her vulnerable, but I found the general idea helpful for understanding her playstyle. As for moves she can perform herself, first up is Arial Spinning Slash, which is performed with her forward special and is exactly what it sounds like. She’ll jump forward and slash her blade multiple times in the air; the Triangle and Circle versions also hit on the way up, and seem to rise higher. This attack makes for a very good combo finisher, so you may want to save it when you’re not fending off your opponent from the air. Her down special follows the trend of naming her attacks after exactly what they do, in this case Thunder. She’ll summon bolts of lighting at different ranges using the non-modified or Triangle variants, or summon three in a row with Circle. It’s a very useful move for pressuring an opponent towards the end of the screen, but not very useful when attacking them there as it needs a bit of space to actually hit. This move can also be used in mid-air, with similar variants. Finally, we have her backward special Spinning Slash attack which has two different follow ups, Ray Strike or Bisection. Spinning Slash is just a forward moving attack on its own, but with Ray Strike you can follow up with a low attack or send your enemy flying back with Bisection, but just be aware that the latter will leave you vulnerable for a moment.

Zooey is another great addition to the Granblue roster and is one of the few characters who can fight well at both long range and up close. While it can be difficult to get a moment to charge her dragon gauge during a heated battle, it’s worth it for the wealth of options it gives you. With all her possible follow ups and wild variations, she can be difficult to read and predict so use that to your advantage.

All four characters in this first DLC pass add something unique and fun the the cast, and if you enjoy the game already I couldn’t recommend it enough. Even if you only play the single player or locally with friends, they each come with a few new missions. If there is a second season pass, I’m looking forward to what those new characters will bring to the table.

David is the kind of person to wear his heart on his sleeve. He can find positives in anything, like this is a person who loved Star Fox Zero to death. You’ll see him playing all kinds of games: AAAs, Indies, game jam games, games of all genres, and writing about them! Here. On this website. When not writing or playing games, you can find David making music, games, or enjoying a good book. David’s favorite games include NieR: Automata, Mother 3, and Gravity Rush.
Related Articles: Granblue Fantasy Versus
Share
Tweet
Share
Submit