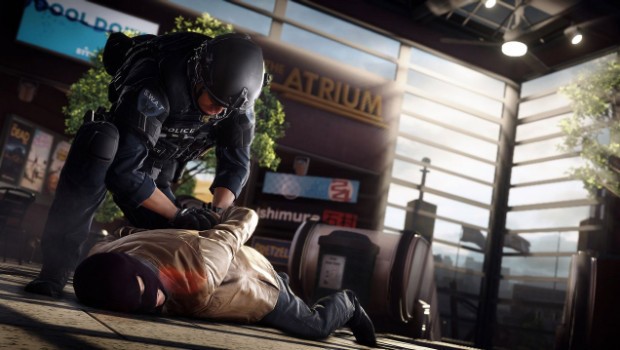 The Battlefield: Hardline beta feels familiar, and I don’t know how I feel about that.

My biggest complaint was it looked and felt like a reskinned version of Battlefield 4. It is looking polished, especially for a beta, and the controls felt well-thought-out and tight. It has the ability to become a fantastic game, however I can’t shake the feelings of it being Battlefield Cops and Robbers versus a completely new experience.

There are three modes available within the beta; Conquest, Heist, and Hotwire. I found myself loving Conquest at first because it is the same as other Battlefield games, and was the most familiar. But playing this mode way it even more clear it felt like Battlefield 3 or 4 with new player models. So I jumped into Heist, a mode where the robbers are attempting to steal large amounts of money and make it to the extraction point. It was fun, new and interesting, but ultimately didn’t blow my mind. Finally, I moved into Hotwire and things changed. Hotwire is an intense game of cops vs robbers mixed with fast cars. It is a smaller version of conquest but with high profile vehicles, which capturing them helps your team with points, and is fast and intense. Chasing down people and cars with someone shooting grenades out the window is insane. It is by far the highlight of the beta and worth a second glance.

The graphics are stunning. The levels available really shine and show off some good design features and beautiful visuals. Running through gunfire and sniping from a distance look and feel great. I have only noticed a small amount of glitches compared to what I would expect from a beta. The whole map looks thought-out and has tiny details, giving a feeling of actually being a place in the real world instead of just a level in a game. The Conquest map available has great close quarter and wide open spots, which allows people of different playstayles a chance to get in on the action. Fighting in buildings is fast and intense, but there is also fear knowing if you leave that building snipers will be waiting.

The biggest downfall I have noticed, and something I hope this beta will help fix, is that Hardline is extremely unbalanced. Certain weapons are overpowered and some levels need to be reconfigured to give certain sides an even chance of winning. Certain guns also seem to be currently over or under powered, but that’s ok because this is a beta. The sniper seems to be very underpowered at the moment, and I did not see as many people using it as I would expect. At the same time the assault rifles are ruling the leaderboards.

The sound is superb, giving another layer of realism. Running through explosions, with bullets whizzing by is intense, while walking solo and hearing the wind and ambient sounds feels somewhat therapeutic, considering the hell you are about to walk into. This game strives on being in your face and fast-paced and the sound effects perfectly help push it over the edge.

Although my time with the beta has been short, once I got past that, it began to feel like a Battlefield game and more like a direct sequel, which was exciting. The game is fun and fast, and it feels so good to play. I played both the PC and PS4 versions, and have to say I am waiting anxiously for the release now. If they can fix a few glitches and the balance problems, Hardline could become a strong contender for top FPS in 2015.

Growing up in a small Colorado town, Bryan has always had plenty of time to play games. PC is his first choice of tech followed by the PS4. Graduating at 16 Bryan knew he wanted to be a writer and wanted to combine his love of games into that and found Gaming Trend in 2012 where he quickly became a member and started writing for them as soon as he could. He is still at Gaming Trend, but now has 2 kids, a puppy, and a lot less time to play the games he loves, but he always finds a way to get back into gaming.
Related Articles: Battlefield: Hardline
Share
Tweet
Share
Submit