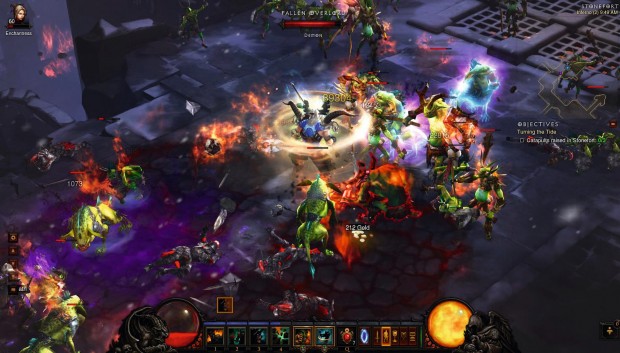 2014 has been a hell of a year for gaming. On the console front we saw Sony and Microsoft clawing at each other in a desperate fight for the numero uno console spot, with Nintendo hoping a bevy of top-notch games would turn heads towards its so far underperforming home system. We’ve seen multiple re-appearances of age-old titles updated for the modern era, the usual innovation from the indie and kickstarter  scenes, and we saw it all with some tumult in the gaming journalism field as well. But the games, as always, are the real thing to look back on – so without a drumroll to lead me in, let’s take a look at my ten top games of 2014.

Elite: Dangerous stormed onto the scene fairly recently, but the moment I fired up the engines I knew this game was going to be landing right on my top ten list for 2014. The return of a classic franchise in a genre that has been utterly abandoned for far too long – and it’s come back with such style! While it isn’t quite the monetary and hype juggernaut that is the beautiful Star Citizen, Elite does a fantastic job of placing the (virtual) universe in front of you, encouraging you to explore and build your life among the stars in whatever way you see fit. Even at this early stage of its release, Elite feels alive and manages to surpass expectations – this may well be a favorite game of mine for 2015 as well.

Dark Souls II came out this year, storming onto the PC with a more graceful landing than its popular but awkwardly-ported predecessor managed to pull off. Not only did From Software demonstrate that they’re actually somewhat competent about releasing onto the desktop platform if they put their minds to it, but the game managed to throw down a trio of DLC selections that helped add to an already satisfying (if typically morbid) RPG action adventure experience. I’m a sucker for this kind of sadism, looking forward to Dark Souls II the moment it was announced – and I was not disappointed.

Diablo III: Reaper of Souls / Ultimate Evil Edition may be an expansion to a game that’s already been out, but let me be frank: Diablo has been re-tooled so thoroughly since its initial launch and in the wake of its addon that it could be counted as a whole new game by any reasonable measure. Blizzard has shown the sort of dedication to this title that other companies can only dream of having: the removal of the auction house, the introduction of season, the retooling of the difficulty mode… the game is, put simply, a whole new experience compared to what it launched as. I enjoyed the original Diablo III, but what the game became in 2014 is what will really keep me coming back.

And then there’s Goat Simulator. Standing out like a sore thumb on a list of games otherwise known for their deep or well-polished gameplay, Goat Simulator’s here for a good reason: it represents a facet of gaming that often gets forgotten. Fun. Not the sort of fun a team of game-making experts create after months of exhaustive development work with an eye on an established genre, but the sort of fun that starts out with drunken conversation and a few “what if” scenarios that ultimately get out of hand. Goat Simulator is barely a game in any traditional sense, but it still manages to be fun and light-hearted, like an open-world adventure coded by a maniac whose obsession for goats can top the most amorous New Zealander.

Once upon a time World of Warcraft had a trading card game, complete with loot cards that could be redeemed for in-game prizes. Played on a table with actual cards-made-of-paper, this was eventually phased out while the Blizzard Powers That Be suggested that a replacement would eventually come out. Now, Blizzard has a reputation for polish and dedication, but Hearthstone still managed to impress in way upon way. Easily the most beautiful trading card game ever to come out on the PC, the title also managed a near-flawless iOS/Android port complete with Battle.net integration. Already there’s been multiple expansions of sorts, and the skill and care with which this game has been crafted continues to be shown off.

Super Smash Brothers brings together a wide variety of characters from Nintendo’s best loved series, allowing you and your friends to take on the roles of their favorite console icons, and then proceed to beat the everloving crap out of each other with a seemingly endless list of combos, items, moves and unlocks. With a tremendous amount of things to do, gorgeous graphics, fun characters and incredible heart, Super Smash Brothers is Nintendo’s way of making damn sure no one with a soul regrets their Wii U purchase. (Or 3DS, but who regrets that?)

South Park: Stick of Truth deserves a place on this list not just because it was so well-done, but because there’s just so many ways the whole thing could have gone bad. While the creators may be masters of mimicry and mockery, managing to pull off an actual sincere role-playing game was so daring that Parker and Stone could have failed at it utterly and the reaction would have been “Yeah, well, that’s understandable.” But Stick of Truth was done so inexplicably well, while still remaining faithful to the show’s humor and style, that at this point it’s hard to imagine an entertainment genre the creators could have a go at and not do a decent job with.

3: Tales from the Borderlands

Tales from the Borderlands marks Telltale Games’ first step into the world of everyone’s favorite loot-centric FPS. At this point we can stop talking about how adventure games are back from the dead, because the new thing to talk about is just how damn -good- they are under Telltale’s creative control. Fleshing out a world that the FPS games largely hinted at rather than deeply developed, Tales from the Borderlands sets the stage for great things to come in the Borderlands universe – at least if Gearbox ever gets it together and creates a game with an actual new and proper engine.

Titanfall represents Electronic Arts’ toss of the hat into the Call of Duty styled competitive shooter arena, introducing its own crazy world of giant stomping mechs and first-person shooter action. Gorgeous and smooth, customizable and fun, the game’s population has ticked down since its original release, but it remains on my list just because it’s such a blast to revisit, and provides what feels like a fresh take on team versus team FPS combat.

Last but not least we have Wasteland 2. To say I’ve been waiting for this for a while would not do the wait justice: I’m pretty sure I was looking forward to this game before the popular advent of the modern internet. Well-written with great gameplay, capturing the spirit of the original while bringing the title into the era of modern PC gaming, Wasteland 2 did not disappoint. While it was one heck of a long wait to see this title come out, all I’ll say is that I’m glad the forces behind it persevered until the job was well and truly done.

Victor Grunn has been a gamer since the days of single-button joysticks and the Atari 800XL. When not lamenting the loss of the Ultima series or setting people on fire in Team Fortress 2, he's an aspiring indie game developer and freelance writer.
Related Articles: Dark Souls II, Diablo III, Elite: Dangerous, Goat Simulator, Hearthstone, South Park: The Stick of truth, Super Smash Bros. for Wii U, Tales from the Borderlands, Titanfall, Wasteland 2
Share
Tweet
Share
Submit