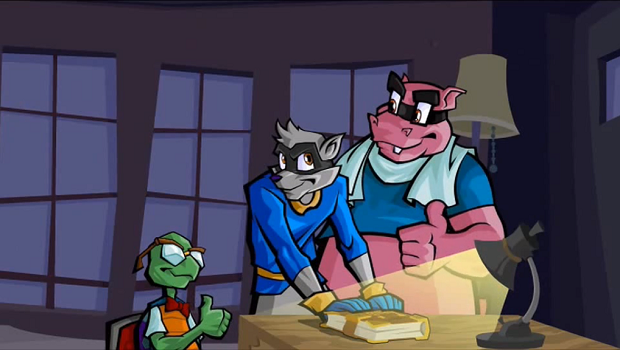 As someone who works in the video game industry, when there’s disappointing news I try to be understanding. If a game isn’t good, I get it, games are hard to make. If a game needs to be delayed, I get that too. There’s not much that happens in the industry that actively bothers me. Sure, I’ll have my opinions, I’ll write about them and talk about them, but there’s very little that gets under my skin as a gamer.

Today, however, I had a moment of genuine sadness.

A few hours before I began writing this, Sanzaru Games confirmed it had no plans to create a follow-up to Sly Cooper: Thieves in Time. The studio took the reins of the series after Sucker Punch began working on the Infamous franchise after Sly 3: Honor Among Thieves came out in 2005, and I absolutely adored Thieves in Time when it finally came to PlayStation 3 last year.

The Sly Cooper series is one of my favorites. Back in 2004, when I was 12 years old, my Mother got me my own PlayStation 2 so I would no longer have to bum off my sister’s, and along with that I got the recently released Sly 2: Band of Thieves. I loved Sly and his merry band of misfits, and I got the original game soon after, and Sly 3 was one of my most anticipated games of 2005.

Lovable and charming, the Cooper Gang is one of my favorite casts I’ve encountered in all my years of gaming. They’re one of the few groups in the games that I’ve played that have a fate I’m invested in.

The next year I got my Xbox 360, which was my primary console for many years last generation, until I ultimately felt disconnected from the games industry between the years of 2009 and 2011.

In 2011, Sly Cooper: Thieves in Time was revealed during Sony’s E3 press conference. I was ecstatic. After years of my love of gaming waning and only ever resurfacing when a new Bioware game came out, I was fully convinced to buy a PlayStation 3.

Thieves in Time didn’t come out for another two years, so while I waited I finally played series that I’d been missing out on like Infamous and Uncharted. I had quite a bit of catching up to do, and eventually my love of gaming came back to me.

The strange thing about Thieves in Time was that I never before felt like I actually needed, or was even going to get a fourth game in the Sly Cooper series. Sly 3: Honor Among Thieves ended on a pretty definitive and touching note, and while I always wondered what could’ve happened next for the Cooper Gang, I didn’t think it was super necessary to see whatever followed. I certainly never complained about having more Sly Cooper, but when I played Thieves in Time, I found that it ended much less definitively than the last game because it left Sly stuck in Ancient Egypt hundreds of years prior to the time he originates from. A sequel was absolutely necessary. That’s what makes Sanzaru’s news today all the harder for me. I didn’t need a sequel before because the story didn’t merit it. But with Thieves in Time? It was a necessity.

Thieves in Time led to my buying of a PlayStation 3 and my falling in love with gaming again. I loved the game’s cliffhanger when I got to it because I thought it meant that there would inevitably be a Sly 5. Now, that’s completely up in the air.

In my attempts to hold onto that same rationality I claimed I have in the first paragraph of this, I’m doing my best to not get angry and point fingers at whoever’s executive decision this was, but it’s not helping how upset the thought that the end of Thieves in Time could be the definitive ending of the Sly Cooper makes me. Honor Among Thieves leaves everyone in the Cooper Gang in a place where there’s no reason for fans to worry about them, while Thieves in Time literally has Sly stranded in a time period that he doesn’t even know.

Should Sly Cooper never continue past the secret ending of Thieves in Time, the entire thing just feels like the irresponsible handling of a franchise that Sony appeared to be interested in bringing back when it was fine where it was before its resurrection. I think of Halo 3’s conclusion, which has Master Chief in a similar situation to Sly’s, but there was never a question as to whether or not Microsoft would move that story forward when Bungie wrote, scored, voiced and rendered that game’s final minutes.

There are some series that I can say that I don’t need a sequel to. I don’t think The Last of Us needs a sequel because it ends exactly as it needs to, and while I’m excited for the new Mass Effect game, I would have been content if the franchise had ended with Shepard gasping for air. I felt that way about Sly Cooper, but if Sony’s not working on a fifth game that will resolve the cliffhanger of Thieves in Time, what was the point of a fourth game at all that left one of my favorite characters from the PlayStation 2 era trapped in a time he can’t seem to escape from?

Unlike Thieves in Time, Sly 3 ended definitively and even had a “Happily Ever After” feel to it. If Sony wanted to continue the story of a much beloved character, why aren’t they ensuring that he ends up just as happy at the end of it?

It’s not like this is a problem exclusive to video games. Movies, books and TV shows end in cliffhangers only for a follow-up to never see the light of day. However, it’s not every case when a seemingly complete story is left unfinished after the fact because a new, and maybe final installment leaves the story on a cliffhanger.

That’s why this news leaves me frustrated and just very sad. I’d rather have left Sly on a balcony with his rival of a love interest than stranded in a desert in a time where he may be unable to leave, and the fact that Sony was keen on reviving the series just to let this kind of cliffhanger become the new ending of the series feels like a slap in the face to fans and the character.

It’s been revealed that Sly Cooper will be getting a theatrical adaptation in 2016, but even if I see the Cooper Gang on the big screen, that doesn’t erase the fact that canonically the character appears to be left in an unnecessary cliffhanger that’s happening because of a thoughtless handling of a series that didn’t need a new game in the first place.

With Sly 5 potentially not happening, the only thing we know that’s coming from Sly Cooper is the movie in 2016. Whether the film is canonical or not, it’s unlikely to address the fact that the titular character is trapped thousands of years away from his friends.

I worry that there may be a tinge of ungratefulness coming from this piece, and Sony may very well have handed the Sly Cooper series to another studio. If that’s the case, I wish that Sanzaru’s announcement would have come after the reveal of a new game.

I don’t know what the future holds for Sly, but all I can say at this point is that I’m just heartbroken at the thought that seeing him looking upon an ancient sphinx and realizing he has no way home could be the last thing I see of him.