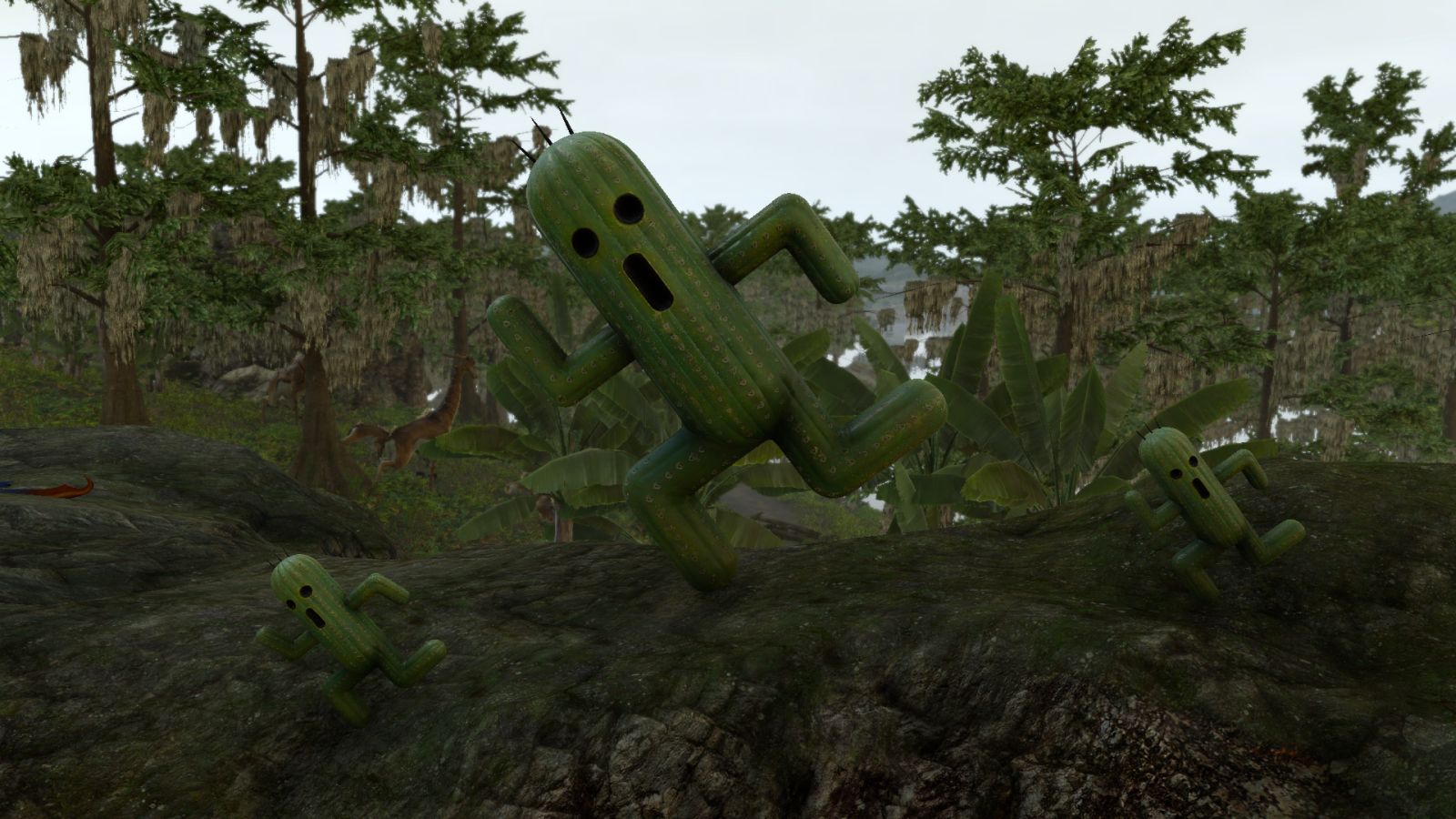 We knew early on that Final Fantasy XV was going to get a PC edition eventually, but the way it was announced seemed almost like an afterthought. Fast forward to the launch of the console version, with its various rewrites of the third act, and there was a recipe for another lackluster port in the making. In fact, all signs pointed to disaster.

I’m so very happy to be wrong.

Rather than rehashing our review of the game, I wanted to focus on the improvements that PC gamers with enough hardware to take advantage of those upgrades can expect to find. You can read up on my system specs in my “coming home” write up here, but the long and short of it is that it’s an AMD Ryzen 1600X processor, 16GB of Fury DDR4-2666, Samsung 960 EVO NVMe 250GB SSD for storage, and a EVGA GeForce GTX 1080 TI SC2 graphics card to power the whole thing. It’s more than powerful enough to handle anything I can throw at it, but with all of the enhanced features on deck for this title, my eyebrows were raised.

If you are double-dipping, the PC version is naturally going to be the most gorgeous version of the game available. While the Xbox One X was capable of delivering 4K, it was done using checkerboard rendering (here’s some quick info on what that means). On PC, the game is rendered at true 4K, without any sort of trickery. Graphical upgrades are often merely cosmetic, but with draw distances pushed far further out, you can spot distant foes, goodies you might need to pick up in the distance, or just enjoy the vistas the game has to offer, granting gameplay improvements as well as gorgeous visuals with the same brushstroke.

If you’ve got an NVIDIA video card, there are some specific features you’ll have at your fingertips. NVIDIA TurfEffects provides new grass effects that not only increases the density of the grass, but also the realism in the way it lays as you run through it. Your crew leaves a path as they tromp through it, extending as far as the draw distance will carry it.

Something as simple as grass can be incredibly immersive.

NVIDIA HFTS deepens the already-solid shadow work, making the already-excellent interplay of the lighting engine that much better. Coupled with NVIDIA VXAO (high quality ambient occlusion – a technique to simulate the amount of shadowing caused by an object intersecting with a light source), there is a marked visual difference in the subtle lights and shadow of the game. If you do run VXAO, remember to turn off the standard Ambient Occlusion as it will tank your FPS, but if you have the hardware to run it, VXAO makes a huge visual impact.

If you’ve been an NVIDIA user for a while, you are probably familiar with their Ansel technology (and if not, here’s a primer). This lets you capture screenshots that can be rendered in a 360 panorama, coupled with a dizzying number of filters and post-processing options, and captured at any angle with the free camera, liberating you to preserve those awesome gaming moments at any time, and with precisely the look you want. You can even capture them at resolutions up to 63360x35640 — and no, that’s not a typo.
NVIDIA Hairworks, often the most expensive feature in terms of processing power, makes every wooly beast look even more gorgeous as they shake and shamble. While the main characters tend to have their hair locked in place like they swam in hairspray, the creatures let their manes run wild and free. You can see exactly what I mean at the one minute mark in this video:

A new technology for the company called NVIDIA Flow changes the way games can render fire and smoke. The video below, while not Final Fantasy XV-specific, showcases some of the incredible ways that the technology can dynamically engulf objects with smoke and fire, raising the level of realism to an entirely new level. It’s something you have to see to appreciate, so I leave you to it.

The game also supports Dolby Atmos, which is great if you’ve got a killer sound system for your PC, or if you are piping it through your living room surround sound system like I do.

If your system isn’t quite up to running all of the bells and whistles, there are a number of options to tweak until you reach the desired performance target. There is a toggle for your maximum framerate (it caps out at 120 fps), resolution scaling, model LOD, lighting and shadow adjustments, AA, as well as all of the aforementioned NVIDIA-specific features — a total of 18 in all. If you would rather stick to simple presets, there is a simple low, average, high, and highest presets to keep things simple — the game will attempt to auto-detect what is most appropriate.

Benchmarking at 4K yielded unsurprising results when running with all features enabled. At a resolution of 3840x2160, I was able to hit around 54fps pretty reliably. A single tweak (I dropped the overall filtering a notch, to no visible effect that I could see) pushed the levels reliably above 60, which is good when the combat is this frantic. Knocking the resolution down to 1440p drives framerate closer to 75fps with the filtering once again maxed.

Beyond the visual improvements, there are advantages to playing on PC. If you’d prefer to play the game with a controller, there are four presets to choose from, and naturally you can play with mouse and keyboard. You can also remap the keys at will. There is also a first-person mode which is entirely unique to this version. Pressing N on the keyboard lets you zoom into first person perspective giving you a closer look at all of the visual splendor.

In practice, dispatching foes in first person takes a little bit of time to get used to. Enemies can flank you more easily as you lose situational awareness, but it’s a cool inclusion. Moreover, this just gives me entirely too many ideas about a first-person VR Final Fantasy — a modder can dream.

Speaking of mods (which are officially supported), there are already cactuar suits and weapons, a resource management mod to handle issues with having a controller and keyboard connected at the same time, and even a performance mod that slims some of the loading times and microstutters. The game has been out less than a week, so undoubtedly there will be full conversions to make all of the characters into lightsaber-wielding ninjas riding motorcycles made of rainbows, or something equally as ridiculous soon.

In addition to all of the bells and whistles, the PC version of the game comes with the Insomnia City Ruins Expanded Map, First Person Mode, Armiger Unleashed, an unlocked Royal Cruiser, additional quests and upgrades for the Regalia Type-D, the Comrades Multiplayer Expansion, Holiday and Booster Pack+, 13 (why not 15?! Talk about missed opportunity) DLC items, and Episode Gladiolus, Prompto, and Ignis, all baked right in. If you waited, your patience will be rewarded.

What amazed me was just how clean a port this is. With a huge host of visual improvements, this easily could have been a disaster, but here we are just after launch with a stable and gorgeous version that includes everything but the kitchen sink. Best of all, you don’t have to take my word for it — Square Enix was kind enough to provide us all with a free benchmark. Take it for a spin, and you’ll come to the same conclusion that I did — this really is the Royal Edition of the game.

Ron Burke is the Editor in Chief for Gaming Trend. Currently living in Fort Worth, Texas, Ron is an old-school gamer who enjoys CRPGs, action/adventure, platformers, music games, and has recently gotten into tabletop gaming. Ron is also a fourth degree black belt, with a Master's rank in Matsumura Seito Shōrin-ryū, Moo Duk Kwan Tang Soo Do, Universal Tang Soo Do Alliance, and International Tang Soo Do Federation. He also holds ranks in several other styles in his search to be a well-rounded fighter. Ron has been married to Gaming Trend Editor, Laura Burke, for 21 years. They have three dogs - Pazuzu (Irish Terrier), Atë, and Calliope (both Australian Kelpie/Pit Bull mixes).
Related Articles: Final Fantasy 15 Windows Edition
Share
Tweet
Share
Submit