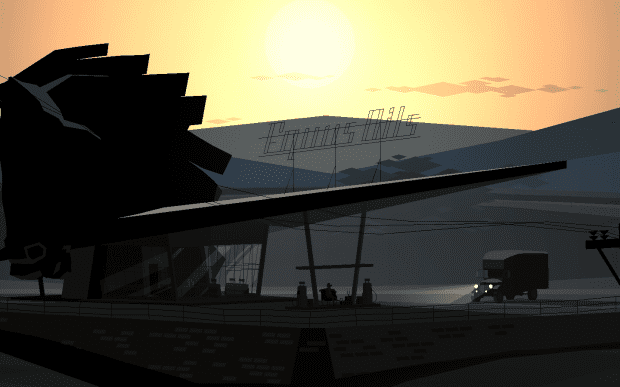 When we reported on the finalists for the upcoming Independent Games Festival awards, I took a brief moment to scan the list of nominees for the Seamus McNally Grand Prize Award. FTL, Hotline Miami, Little Inferno – yep, I’d heard of these games before. But one particular game stood out from that list, a name I’d not heard up until the moment I had read that post: Kentucky Route Zero.

What the hell could this possibly be, I thought to myself as I quickly reached for my mouse, clicking the link with as much haste as I could muster. At their official site, I was greeted with a singular bold image: a silhouette of the head of a horse (possibly a chessboard’s knight?) and the sharp, angular lines of a triangle-shaped building, with a simple arrow at the bottom inviting me to scroll down. Scroll I did, and suddenly the image begins to fade to black as the title scrawls from the bottom of the webpage.

A Game in Five Acts

[singlepic id=10268 w=320 h=240 float=left]With this simple act, I was already hooked. I continued to read the description. A “magical realist adventure game;” “inspired by point-and-click adventure games;” “focus on characterization, atmosphere and storytelling” – as someone who has been recently jaded with a majority of major publisher’s storytelling methods, this was right up my alley: a palate cleanser from all of those whiz-bang first person shooters with exploding tits and f-bombs in every other line. My eyes scanned back up to the top, and stopped on a phrase I’d just read.

“Magical realist adventure.” Typically games are “war stories” or “sci-fi.” At times you get some misguided attempt at “film noir” (usually with far too much action) or even the occasional western. But “magical realism?” This was typically the realm of novels or film, not video games.

Despite only having one episode available for download, I immediately bought the entire season.

The game starts up just as boldly as the website does. KENTUCKY ROUTE ZERO emblazoned in bold lettering. ACT I, SCENE I. EQUUS OIL. A hazy sunset lolls in the background as the camera pans down to a quaint rural scene: the gas station in the middle of nowhere, with the stark shadow of the horse’s head I had seen on the website as its mascot. It towers over everything, looming over the building as the entire area is enveloped in darkness.

A truck pulls into the parking lot, and an older man – Conrad – steps out with his dog, Conrad’s back hunched from sitting at the steering wheel of his car for far too long – and it’s amazing that the game can convey this sense of character despite lacking any real detail or texturing. Another man is sitting in the darkness in the middle of the gas station. I hover my mouse pointer over him, and a text bubble appears over his head. I click it.

I begin a long conversation with him, and begin to learn some details about my situation. I was delivering a package and got lost – or did I just want to enjoy the scenery? I was presented with a choice.

[singlepic id=10269 w=320 h=240 float=right]In this way, Kentucky Route Zero is very similar to our own game of the year, The Walking Dead; this is a point-and-click adventure game that gives the player enough agency to choose their own path through the game. But where Kentucky Route Zero differs is that player agency doesn’t necessarily change the how the story plays out, but rather details about the characters. The old man asks me what my dog’s name is. I can say his name is Homer, Blue, or that I don’t know what his name is. This choice then becomes truth for these characters and everyone around them. In a sense, I am filling in the blanks of these character’s lives.

Anyway, I learn that I’m supposed to be delivering a package, and I need to get to the Zero: a mysterious highway that always seems out of Conrad’s reach. The word itself is constantly in motion when displayed in the dialog box, enveloped in shadows. The old man would love to help, but the directions are on the computer, and the power’s gone out. I need to go down to the basement to flip the circuit breaker. Here we go – video game cliché number one.

I enter the basement, and three people are seated at a table, playing some kind of pen-and-paper RPG. Odd. I try to speak to them, but they ignore me and go about their business. One of them has lost their glow-in-the-dark 20-sided die. Ok, I can find that for them. Easy.

I run off to the side of the room, pick up the die and bring it back. The table is empty when I return, no sign of their game ever having taken place.

To reveal any more would be spoiling.

Suffice to say, the entire chapter retains that feeling of being both grounded in reality and slightly off – like a television station that’s just out of tune. Something weird is going on out on this highway; some kind of magical spirit or force is at work, and I’ve become inexorably entwined within it. The ability to actually get to know these characters by creating their pasts is an incredibly novel idea — not to mention the clever introduction of new characters and music — and I can’t wait to see what happens in future chapters.

[singlepic id=10270 w=320 h=240 float=left]Kentucky Route Zero promises to be a brilliantly surreal work – like an interactive Haruki Murakami (a personal favorite) or Gabriel García Márquez novel (in fact, the last name of one of the characters in the game is shares Márquez’ last name). Each of these authors deals with subjects that are both firmly rooted in reality, and yet feel somewhat fantastical — like a fantasy that could happen in your own backyard. While I’ve not personally read any of Márquez’ work, I definitely got vibes of Murakami’s opus 1Q84 while playing the game. Kentucky Route Zero’s world is one in which things seem familiar, but slightly darker, maybe a little more sinister, but the curiosity to find out  how far the rabbit hole goes far exceeds any fear.

It lacks virtually anything that could classify it as a game – puzzle, challenge, etc. – other than the fact that it is interactive and there is some rudimentary dot-connecting in regards to moving the plot forward. What it lacks in gameplay it more than makes up for it in exactly what Cardboard Computer has set out to do – “focus on characterization, atmosphere and storytelling.”

Now, I’m not sure if the Independent Games Festival decided to nominate Kentucky Route Zero based on the strength of one episode – four more are due to be released throughout 2013 – or if they had some rough form of the entire game to base their nomination on. Even so, based on the brief hour I spent within this world, whatever the context in which their nomination was received, it’s rightfully deserved.

Kentucky Route Zero is available for both PC and Mac. You can purchase episode one for $7, or purchase all of them outright for $25 directly from their website. I highly recommend you do.

I've been gaming since my dad made the bad decision of buying me a Nintendo when I was four years old. Every day I'd find myself with my face glued to a TV screen, punching away at buttons, getting furious with Bowser, Dr. Wily, and those freakin' birds in Ninja Gaiden. Since then I have failed to get my parents to play any board game with me, I sold my full copy of Earthbound with box and guide for $300 to some dude in Austria for rent money, and I still believe in Nintendo even after all these years.
Related Articles: Kentucky Route Zero
Share
Tweet
Share
Submit