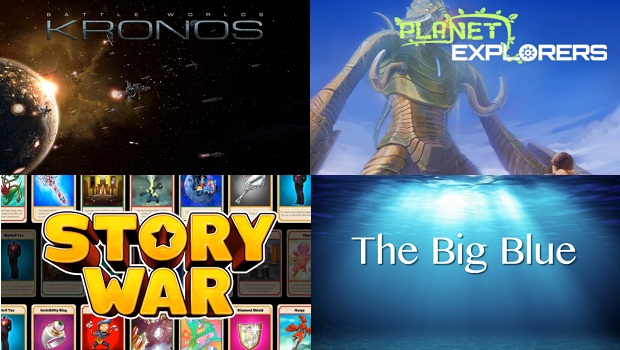 If April showers bring May flowers, then what does March snow bring? Well, here’s another edition of Kickin’ It for starters. Kickin’ It showcases games or gaming-related projects on Kickstarter that deserve special recognition in four distinct categories: Up and coming, a promising project on its way to funding, Underrated, a project with lots of potential but little funding, Updated, a previously funded Kickstarter with a recent progress update, and Unusual, a strange, interesting, or quirky project. The projects in this week’s Kickin’ It are Battle Worlds: Kronos, Planet Explorers, Story War, and The Big Blue.

Up and Coming – Battle Worlds: Kronos

In an age where most games and media focus on action and excitement, turn-based strategy titles aren’t everyone’s cup of tea. Some gamers view them as too slow and tedious. While this is certainly true of some turn-based games, fans of the genre will know that there are few feelings quite as gripping as the compulsion to play “just one more turn”. King Art Games is looking to bring you more of that feeling with a Kickstarter for a new RTS called Battle Worlds: Kronos. Drawing on classics like Advance Wars and Battle Isle for influence, Battle Worlds: Kronos is an attempt to combine the best aspects of turn-based strategy into a fun single-player campaign as well as both live and asynchronous multiplayer gameplay.

Staying true to turn-based strategy, Battle Worlds: Kronos is all about using your units and resources to the greatest possible effect. In order to win, you will need to consider factors like the positioning of units, attack range, armament and equipped upgrades.Victory or defeat – your tactics will decide.

All units in the game have a unique character, setting them apart from all other units and giving them well-defined strengths and weaknesses. You can further individualize them by assigning specific upgrades.

The image above, taken from the Battle Worlds: Kronos pre-alpha, shows definite promise so it’s no wonder that the project has attracted over 3000 backers and nearly reached it’s funding goal. Help put them over the edge here.

If I asked which time period the last RPG you played is set in, chances are it’s sometime in the past. I don’t know if it’s because gamers have a special fondness for it, or if it’s just easier to draw on historical events than to come up with completely new ideas, but RPG’s set in the past far outnumber those set in the present or future. Pathea Games is looking to balance the scales a bit with their latest project, Planet Explorers. It’s set in 2287, and the story revolves around Earth’s attempts to colonize other planets.

The gameplay will be in 3rd and 1st person perspectives. Players will be able to customize their character, combine and create weapons, vehicles, and buildings. At the same time, players will have to defeat multitudes of enemies of varying intelligence and defend the remnants of the colonists. This is an RPG, so it will feature a full story arc complete with missions and side quests. The game will feature a single player story line as well as random single and multiplayer adventure maps. Multiplayer, both through LAN and online, will be featured prominently in Planet Explorers, including but not limited to build mode, adventure mode, cooperation mode, and versus mode.

Planet Explorers has managed to raise about $22,000 out of an $100,000 goal with 26 days to go. Check out their Steam Greenlight page here and their Kickstarter page here.

Story War was mentioned in Kickin’ It a few weeks back, and as of Friday it has been successfully funded. In case you’ve forgotten, Story War is essentially a battle of persuasion. Your team wins simply by drawing on their knowledge of pop culture to convince the judge that, for example, their band of dwarves would have the upper hand against a team of giants. This video, included in a post-funding update, shows some particularly enthusiastic gameplay from PAX East:

Follow the rest of the project progress on their Kickstarter page.

Unusual – The Big Blue (The Next ECCO the Dolphin)

This one isn’t “unusual” so much as unexpected. The last Ecco the Dolphin game was published for the Sega Dreamcast in 2000. That title was in itself a reboot of the franchise, which had last been seen in 1995. So the idea of a new entry in the series seems a little (forgive the pun) out of the blue. But that’s exactly what Ed Annunziata, creator of Ecco,  has in mind. He’s brought much of the original Ecco team back together to make a new game, titled The Big Blue.

The Big Blue is a massive adventure game.  The basic game play involves the following:

The Big Blue will be a highly unique play experience and will include these unique game play features:

The Kickstarter page also boasts that the game will strive for “the most beautiful water and lighting effects ever seen”, and a stretch goal will add an MMO component (like “an aquatic version” of EVE Online). Ambitious? Yes. Achievable? We’ll see. Swim on over to Kickstarter for more details or to back the project.

And that’s this week’s Kickin’ It. Will any of these projects convince you to open your wallet?