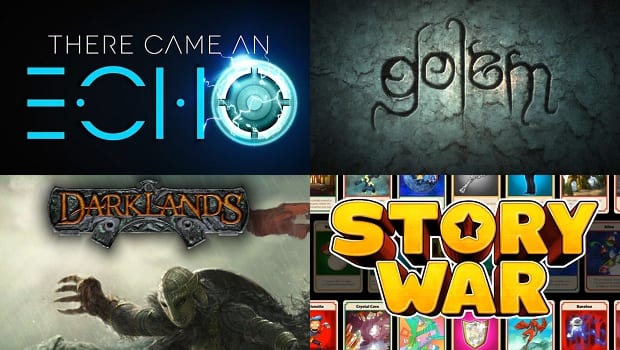 Another week, another four Kickstarter projects you should definitely have a look at. As always, Kickin’ It showcases games or gaming-related projects on Kickstarter that deserve special recognition in four distinct categories: Up and coming, a promising project on its way to funding, Underrated, a project with lots of potential but little funding, Updated, a previously funded Kickstarter with a recent progress update, and Unusual, a strange, interesting, or quirky project. The four projects for this week are There Came an Echo, The Golem, Darklands, and Story War.

Up and Coming – There Came an Echo

If  you’re a gamer on a budget like me, one of the things you’re probably prone to doing (besides checking out Games for the Masses every week) is keeping up with Humble Bundle and other similar indie bundle deals. One game that’s made its way around the indie bundle circuit is Sequence, a fun fusion of rhythm and RPG. Iridium Studios, the makers behind Sequence, are now looking for Kickstarter funding to make a second game: There Came an Echo.

There Came an Echo is a game in which you, the field commander of a small squad, use your voice  to direct your units around a map to accomplish various objectives. There’s a list of predefined commands, which might include “open fire,” or “Corrin, head to Bravo  3.” Limiting the dictionary to a few hundred entries helps to improve voice recognition, as the system  (unlike, say, Siri) doesn’t need to differentiate a large number of  words.

That’s right, There Came an Echo is an RTS game that uses voice recognition. You can even customize the commands, so that instead of saying “Open fire!” you can say “Oppa Gangnam Style!” and your units will know what you mean. You’ll also interact via voice with your troops (they’ll ask your permission before engaging in certain actions) and the environment (yay for voice-detonated landmines?) Of course, there will be keyboard and controller alternatives for the commands. I can only assume this is in case you lose your voice or something, because why else wouldn’t you want your angry yelling at the screen to actually have an effect for once?

Iridium Studios is aiming for a mid-2014 release of There Came an Echo, and is seeking $90000 in Kickstarter funding to make that happen. They’re already more than halfway there with 23 days to go, and you can help out here.

Avid readers (or those who paid attention in high school English class) may be familiar with the mythology of the Golem. It’s a story with roots in Jewish folklore that’s been seen in various permutations ever since; Frankenstein, Terminator, Prometheus, and more can all find their origins in this epic monster story. Moonbot Studios hopes that a little Kickstarter assistance can help make their game the next entry in the saga.

The Golem will be an action RPG with a “deep narrative” and “evolving” controls, which centers around the Golem’s journey in 16th century Europe as he fights to stop the Borgias (yes, those Borgias) from taking over Europe. The Golem is a product of five guilds, which each provided some of the materials used to build it.

The Golem is an invincible creature; however, it longs for the one thing the guilds did not provide: a soul. Without a soul, the Golem is destined to be at the command of its creators. Throughout the game, you learn to wield the Golem’s great power against Borgia’s army and aid the Golem on its quest to find a soul.


Although they have several successes under their belt, ranging from short films and mobile apps to a game for PlayStation’s Wonderbook peripheral, Moonbot needs help to make this one happen. They are seeking $750000 in funding, with 29 days to go. Visit The Golem’s Kickstarter page here to learn more or back the project.

Despite not having the same widespread appeal as video games, tabletop related projects are some of the most consistently overfunding on Kickstarter. Maybe it’s because tabletop players have a lot of disposable cash, or maybe they’re just really dedicated to the medium. Either way, Darklands managed to raise £108000 (about $160000) , 20 times their funding target of £5000 ($7500), for “QuickStarter” (see what they did there?) rulebooks and starter sets for their upcoming tabletop wargame.

The drastic overfunding allowed for a ton of extra stretch goals, including more miniatures, dice, tokens, and templates for the game. In a recent update, Mierce Miniatures revealed that the project is moving along steadily and shared some images of the works in progress. You can read the full update here and visit the main Darklands Kickstarter page here.

Imagine a game where the winners and losers aren’t determined by the rules of the game, but rather the convincingness of the combatants. If one side can give a persuasive reason why they should win, then they do. Outside of a debate team, that arrangement is a bit weird right? Well this is essentially the premise of Story War, a card-based party game. Each turn is a battle between two teams; the arena of the fight is determined by the Battlefield card, and each player takes the role described on their Warrior card. The cards are turned over simultaneously, and the two teams then have to convince an impartial judge player why they would win.

Each battle is moderated by a judge that rotates every turn so the shared pop cultural context of everyone in the room is very important! Harry Potter fans might play the Basilisk card differently than Percy Jackson fans. Pokemon fans can cite obscure typing match-ups to explain why you can’t punch a bird. Dungeons and Dragons players will often overlay D&D rules onto the game – don’t even try to convince a D&D-playing judge that the Giant can defeat the Dwarf!

Is your pop culture knowledge a little rusty? No worries, you’re free to make things up as long as the judge doesn’t strike it down upon a successful challenge by another player. Some of the example scenarios given on the Story War Kickstarter page reveal how much potential the game has:

It’s a quirky mechanic for a party game, but it sounds like it would be a ton of fun with the right group of people. Apparently, plenty of others agree; Story War has already surpassed its Kickstarter funding goal. There’s still 24 days left for you to chip in here though.

And that concludes the latest edition of Kickin’ It. Do any of these projects have you ready to open up your wallet?