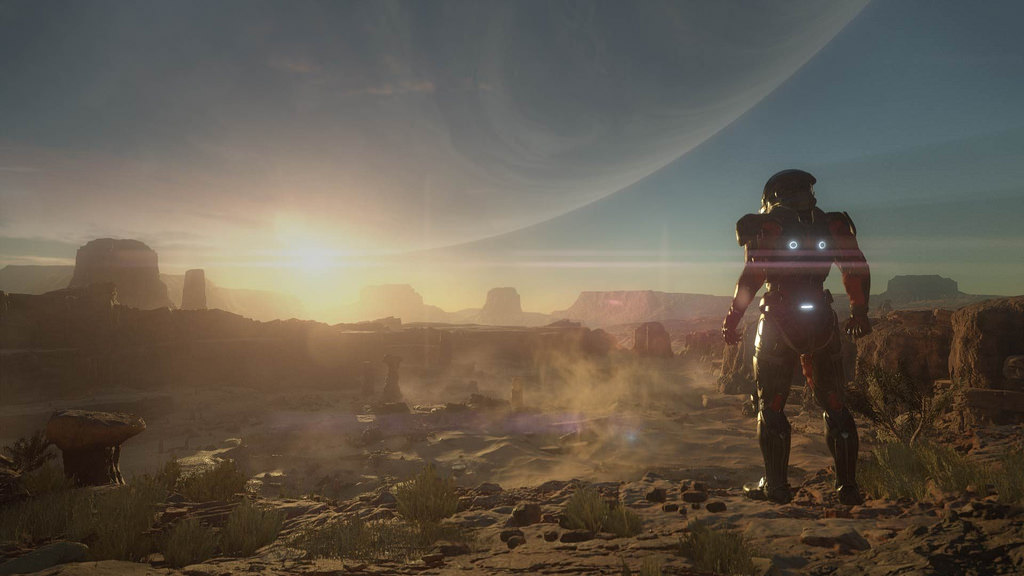 Mass Effect Andromeda was not the game we wanted.

Across the board, critics and fans bemoaned Andromeda’s lack of polish and knocked the game for its samey fetch quests and empty open world — we did in our review too. In light of developer BioWare’s recent announcement that the series is temporarily on hiatus, here are the biggest changes we want to see when the series comes back out of cryosleep.

Ditch or Innovate the Open World

Andromeda’s open world was a first for the series, allowing players to explore a handful of planets on foot or via the Nomad — an all-terrain vehicle that was a worthy evolution of the original trilogy’s Mako. Andromeda’s worlds were huge and regularly photo-worthy, but the spectacle hardly compensated for a pervasive feeling of emptiness and, frankly, absence of fun things to do.

It’s as if BioWare built a pretty sandbox but didn’t but any sand in it.

First, BioWare can ditch the planet-hopping side quests. Knowing I’d have to get through multiple loading screens to travel from one planet to the next made me physically stressed on more occasions than is forgivable. Any game that gives me enough downtime to pick up my phone needs to make some changes, particularly RPGs. Keep the quests on one planet, please.

Also, while the nomad makes traveling across vast deserts and frozen tundras less of a chore, I found myself wondering if vertical exploration wouldn’t suit the game better. Imagine an exploration space akin to James Cameron’s Hallelujah Mountains where players fly to explore instead of driving. Mass Effect earned its reputation by challenging game conventions, which is why the nomad, albeit fun to drive, is disappointing; it doesn’t feel as inspired as, say, a small aircraft.

Havarl was one of Andromeda’s more engaging hubs. Its density and jungle ambience gave this world an excellent sense of atmosphere.

What’s more, the open worlds need to feel more alive. (I know there are those that would argue the emptiness of the open world was intentional, simulating the experience of actually colonizing a barren planet, but if game developers can make flopping around as a piece of bread fun, there’s no excuse exploring a new world should be less riveting.)

Across the handful of planets players get to explore, Andromeda introduces fewer than ten wild species. Ten. A whopping 1-0. If BioWare retains the game’s open world format moving forward, I want to see more species. I want to see herds of species instead of the game loading one creature into my path as I drive across the plains. And I don’t want them all to be hostile critters, as they are in Andromeda. I want there to be docile creatures in the mix that you can interact with in interesting ways. When I play a Mass Effect game, I expect atmosphere and character interaction more so than combat — a pretty scene by itself doesn’t accomplish that.

New Ways to Interact with the Environment

Andromeda relies heavily on its scanning mechanic, a popular convention in games that gives players important information about their environment, but beyond the scanner, combat and dialogue options in cutscenes, the game doesn’t give the player many ways to interact with their environments in interesting ways. (And let’s face it, mining in the nomad is a drag.) What about a mechanic that lets the player climb metallic surfaces in the vein of Breath of the Wild? Or a mechanic for corralling wild species for study? Or a farming mechanic that gives us important resources for trades?

In Fallout 4, players could build, occupy and defend settlements all over post-apocalyptic Boston — but this was just a meta-game, a distraction from the campaign’s main gameplay hooks: combat and exploration. It’s an example of an open world done right and one that Mass Effect should take note of in the future, because it offers players more than a story to follow — it gives them a world to participate in.

Several critics felt the stakes didn’t seem very high in Andromeda, which may, in part, be because unlike previous Mass Effect games, your squadmates couldn’t die in Andromeda. In a series that’s about choices, actions in combat and cutscenes don’t feel consequential if players know nothing irreversible can happen to them as a result. Having killable squadmates is one way BioWare can raise the stakes again when it returns to the series.

Interacting with the friendly Angara and learning about their culture, religion and physiology was one of Andromeda’s highlights.

One of Andromeda’s biggest disappointments was that it only introduced two new alien races, whereas the original trilogy had upwards of 20 by the third entry. One of the series’ greatest appeals is learning about each alien race — their histories, their betrayals — and sometimes making decisions that affect the entire population. Future Mass Effect titles should consider the success of these types of stories, like Mass Effect 3’s Krogan genophage arc or the Quarian-Geth conflict.

You can’t have too many aliens in a Mass Effect game, but you can have too few.

Almost by necessity, BioWare set Andromeda’s story in an entirely new galaxy as a means to escape the trappings of the original trilogy’s choice-driven narrative (and its notorious ending). But considering the game’s overwhelmingly negative critical response, some are regarding Andromeda as a series “one off” hoping that BioWare returns to the Milky Way in future installments.

Don’t do that, BioWare.

While Andromeda didn’t offer as many new species as its predecessors, and while the world doesn’t feel as big as those games, the stories and world BioWare has given players are intriguing and lay the groundwork for larger-scale conflicts in future entries. BioWare should keep the factions, the conflicts and the characters they introduced in Andromeda and build on them in future installments instead of abandoning them as some fans would like.

(Note: If you could bring both galaxies into the fold, that would be really special.)

Exploring Andromeda wasn’t always fun, but sometimes the game would catch me by surprise. Like its predecessors, Andromeda presents players with loyalty missions, quests that flesh out each of their squadmates and end with players making hard moral decisions that typically have important implications for the end of the game. These missions are raw, genuine Mass Effect: action set pieces, smart, snappy dialogue and exotic locations. Not every side quest can have the same production value or fulfillment as a loyalty mission, sure, but even more than the combat and the exploration and the story, Mass Effect is all about the characters. The side quests should reflect that.

Peebee’s loyalty mission took players treasure hunting on a volcanic planet with Peebee’s ex Kalinda on their tail. Missions like this are a far cry from Andromeda’s typical “go here, scan this, kill them all!” side quests.

I get it, BioWare. Mass Effect games are big. But there’s an inherent dissonance in a game that wants to engross players in another world but draws them out because of odd and sometimes game-breaking performance issues. In comparison to games that launched at the beginning of this console generation, Andromeda’s character and facial animations are robotic and, frankly, antiquated. The next time BioWare ships a Mass Effect title, its characters need to be in the same league as those in other big-budget games.

If BioWare wants to act on any feedback fans and critics are suggesting, this is the one I want them to listen to the most.

What would you like to see in future Mass Effect titles? Do you think a sequel should stay put or abandon Andromeda completely? Let us know in the comments.

Hunter Wolfe just graduated with his B.A. in Communication/Journalism from Shippensburg University and has nearly four years of professional writing experience. His content has been featured on sites like Rolling Stone's Glixel, Destructoid and The Artifice. You can check out his full portfolio at: www.hunterawolfe.com.
Related Articles: Mass Effect: Andromeda
Share
Tweet
Share
Submit