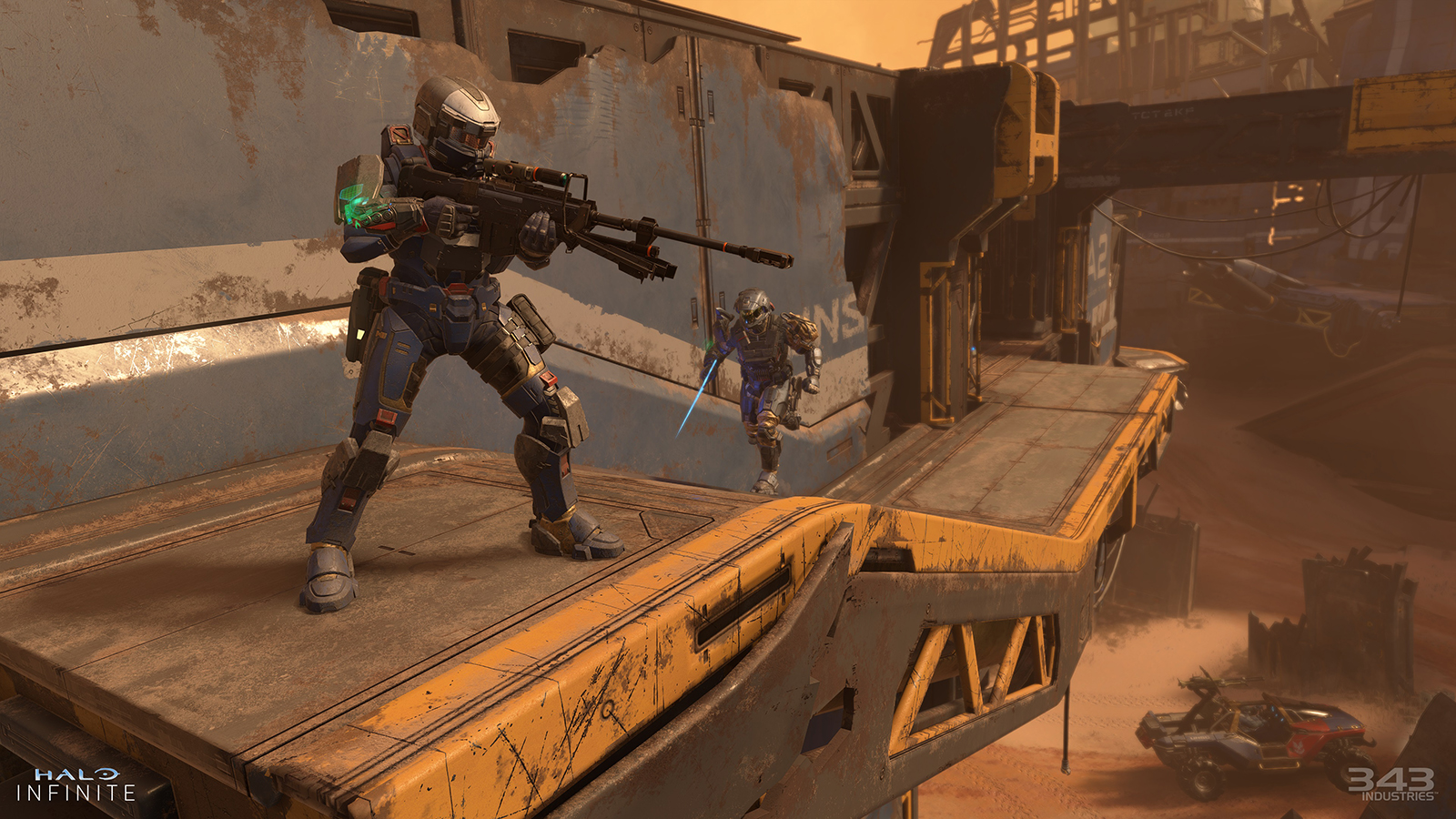 Imagine dropping into a giant arena with 12 other Spartans. You’re alone – lone wolf and all that. You have six lives and start with the Disruptor and MK50 Sidekick pistols. Your goal? Be the last Spartan standing. That objective, combined with the molasses pace, makes Last Spartan Standing a sincerely inferior way to play Halo. It doesn’t commit to being the miniature BR it clearly draws its inspiration from. Its only value is for those who enjoy constant close quarter tension and dominating a single space.

Halo is like an anaerobic sport. Sometimes you have to move fast and keep that pace for a brief time; other times you can slow down, think, and give yourself more time to plan and react. Last Spartan Standing is inherently slow. It encourages slow. It begs you to camp. Many factors contribute to its slow play. Let’s blame the map first.

Breaker, the latest Big Team Battle map added in Season 2, is the featured field debuting with the new mode. I like Breaker a lot. All the high ground is fragmented in such a way that only gives you so much walking space and the lower levels are full of broken spaces to hide behind, but there’s enough open space to target enemies. But it’s too small for Last Spartan Standing. You can tell this map was specifically designed to suit this mode because there are landmarks in different corners of the map that help you easily recall different locations. Those recognizable areas are so small, though, the moment you leave to pursue another spot, you’re out in the open and everyone can collapse on you very quickly. Contrast that with BR’s like Apex Legends or Fortnite, open space can mean doom as you pursue the unsuspecting target or the biggest mistake for revealing yourself. That hardly exists in Last Spartan Standing. If you’re in the open, you’re just a target. 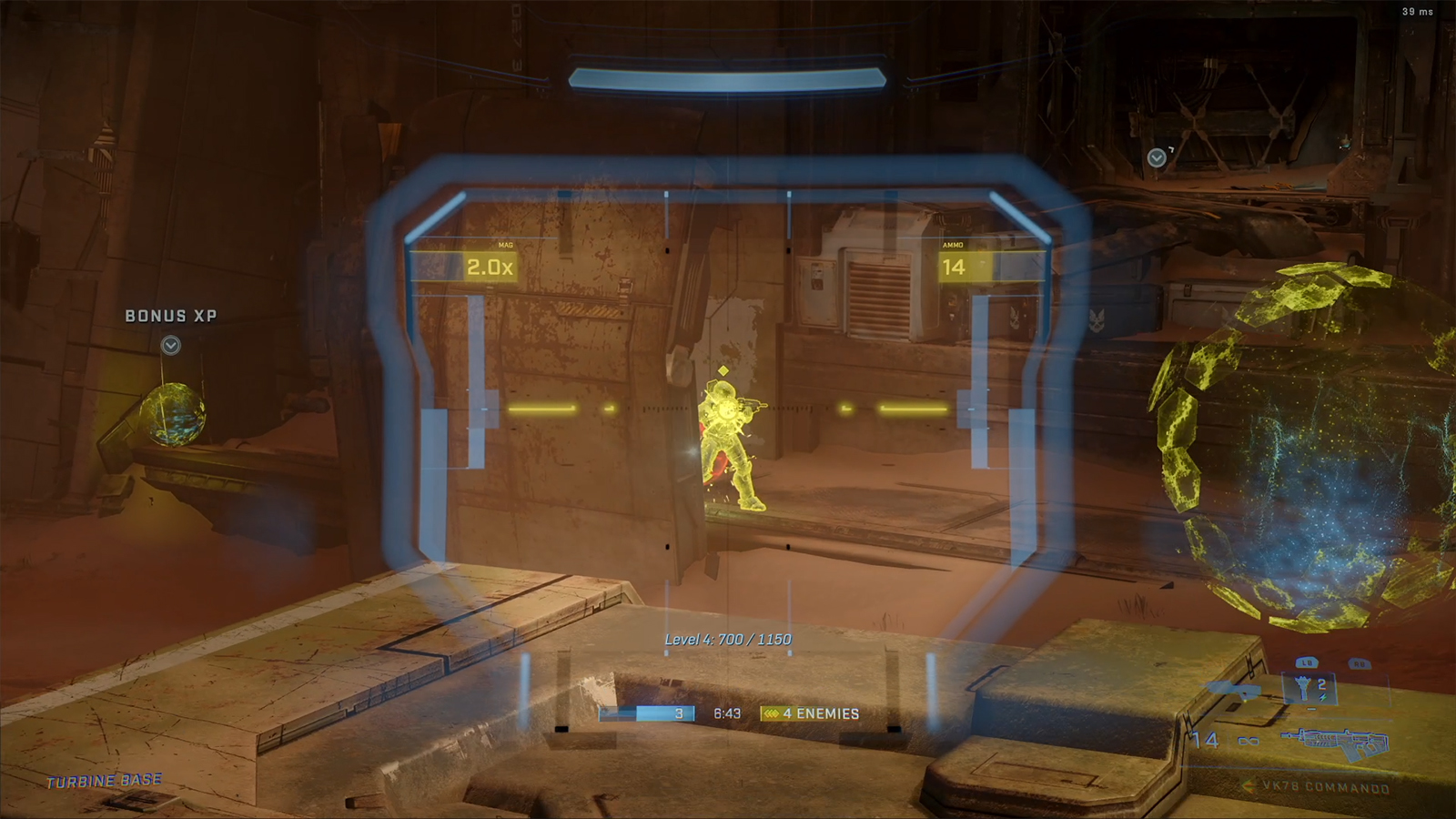 It doesn’t help that you start with close range weapons, then continue to progress towards more close range weapons. Oh yeah, I forgot to mention that you don’t find new guns. You earn them by killing Spartans and reaching certain score thresholds. It’s Gun Game, basically. So like I mentioned earlier, you start with the Disruptor and the Sidekick. Once you reach the first threshold, you automatically ditch the Sidekick for the Mangler. The Mangler’s a strong gun but it continues to promote CQC. From there, your range extends a little with the AR, then the Commando, but then one of the last weapons you get is the Bulldog shotgun, ending with the BR75. Everyone’s creeping around in the same spot and it’s the adventurous ones who are punished.

Canisters drop around the arena that grant cloaks and overshields, but that slows down matches even more. You would think wearing the overshield would promote aggression but because you’re this bright white target, it’s like attracting moths to a flame. It’s better to wait in a spot than risk exposing your garish body. Cloaks obviously encourage people to camp. While not every match is a crawl, you can imagine how slow these matches can get, especially near the end. Most are slow, though.

This would be the perfect gametype to utilize the random weapon racks we’ve seen in Arena since Halo Infinite launched. People look for power weapons or stronger weapons, forcing them to take certain routes that could encourage long, mid, or short range fights. You’d start with an MK50, then look for stronger weapons that could give you an advantage. That is exactly the spirit of Halo and battle royales, but that’s not included. If 343 were afraid someone might just pick up a downed weapon like a typical battle royale, make the weapon disappear. That’s not how BR’s work, but this isn’t a pure BR anyway. Make concessions that fit the mode. 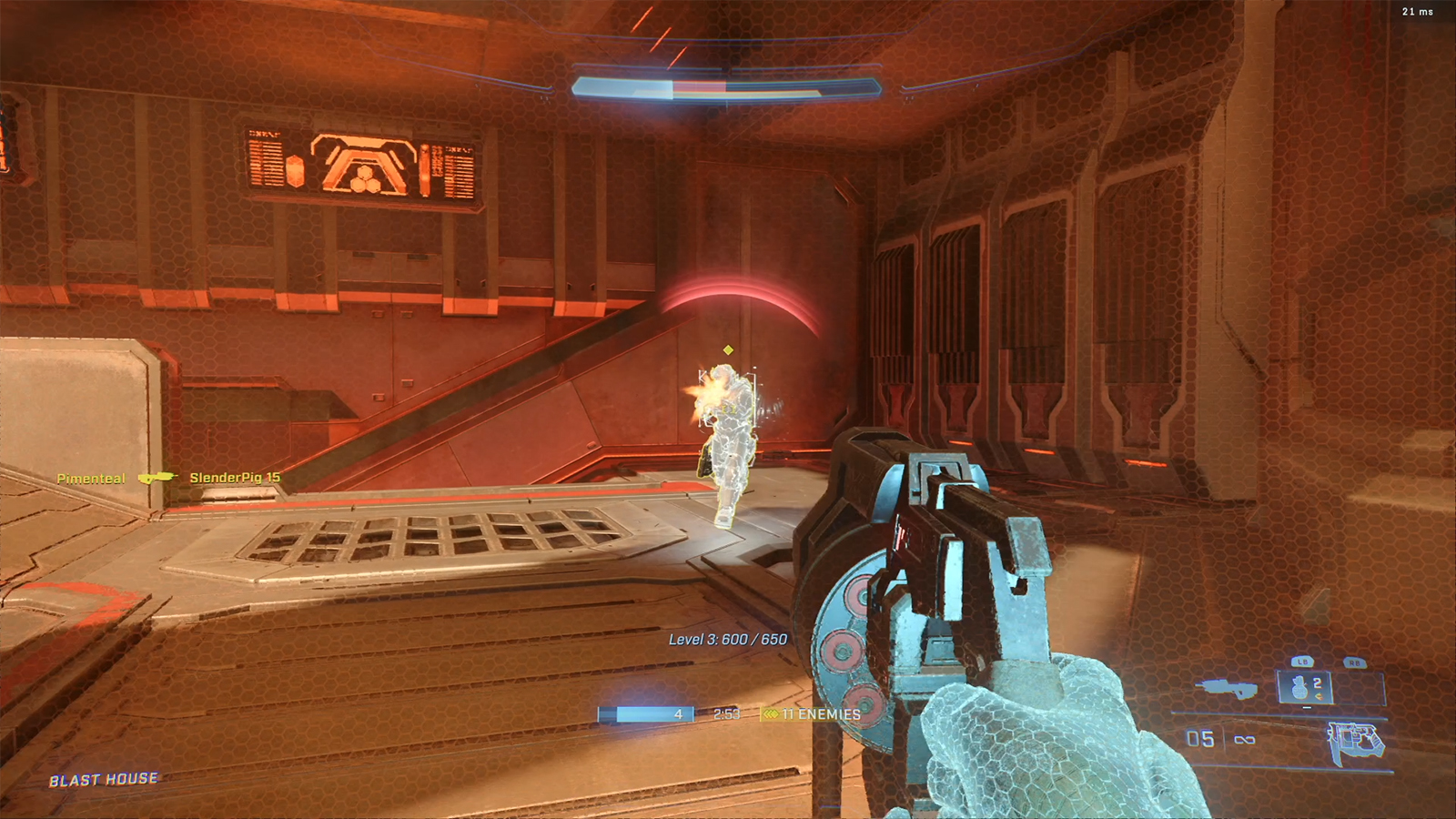 Another way you can upgrade weapons besides killing someone is picking up bonus XP orbs that appear after a Spartan loses their six lives. When you pick up bonus XP, you’re awarded points towards earning a new gun, but the downside is most people camp in the areas the orbs are located, and it takes significant time to collect the XP. It feels like it’s supposed to mimic how battle royale’s let you loot dead bodies, but the risk isn’t worth the reward because it’s not necessary to advance your loadout past an AR and Mangler to do serious damage. I’m not saying the Commando, Bulldog and BR75 are useless, but you can win without making full upgrades, especially since the space closes in on you, forcing even more CQC.

Maybe 343 wanted Last Spartan Standing to crawl like a turtle. If that’s true, they’ve achieved what they wanted, and it’s not for me. But judging how your last guns are a Bulldog and BR75 (writing about battle royales in Halo is so annoying; I can’t just say BR), it seems 343 wants more varied engagement. But gun progression, the map, and equipment only encourage close combat. Last Spartan Standing has tension, it requires tactics, but it doesn’t take advantage of the best parts about playing Halo while adequately creating an interesting, smaller version of a BR. It’s going to be a drag getting through the Last Spartan Standing challenges.