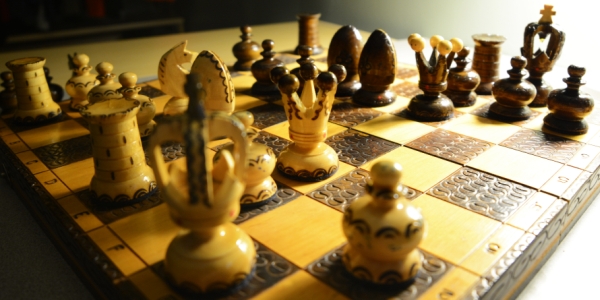 I used to be good at chess.  Not great, but as with all my interests I rarely contribute the substantial energy and time to summit the mountain of the merely good. My excuse is that I have too many interests competing for the same ever-diminishing quantity of time, but that’s my boring story. This one is about chess, mostly.

Not so long ago, chess players and more generally people who played chess were not uncommon and even associated with a kind of unpretentious blue collar intellectualism. Chess was respected as a form of competition on par with great sporting events, epitomized by the “Match of the Century,” where Boris Spassky and Bobby Fischer foreshadowed the endgame of the Cold War.

While very much an everyman’s game, in the current American political culture of the have-not’s versus the haves chess suffers unfairly from the perception of elitism. Learning that an acquaintance is “good at chess” is tantamount to saying, “he drives a BMW.” People have been conditioned to respond angrily towards those who have something they do not have and cannot acquire. Good at chess! Who’s good at chess? Snob. Perhaps as dangerous is the perception that those who are known to play chess are on par with those who perform card tricks at parties or can solve a Rubik’s cube. At best it seems an outdated talent. At worst, a stain on one’s character.

I get it. If you’ve never played the game and no one has taught you the rules, it’s a daunting assembly of pieces positioned precipitously against one another, with a narrow battlefield in between pawns. It feels like a secret grown-ups hide from children. I can’t know that. Not yet. Someday, maybe. A similar mystical divide exists between those who are merely good and those who have mastered the game. But what separates the skilled from the unskilled are the same qualities which always interfere with aspirations of greatness: natural ability and a lot of hard damn work. There’s that pesky “Ten Thousand Hours” misnomer that predicts excellence through the mechanical application of time to task. As a musician, I can tell you that concept misses the mark. In truth, we must challenge ourselves to do things that are progressively more complicated, demanding, and difficult. That it takes huge amounts of time to improve is a function of the effort and not the other way around. Few people are dedicated to the painful process of mastery. The rest of us only witness the result, and the human reaction to that, in a society which coddles mediocrity, is jealousy and spite. True, some successful people are admired – worshiped, even. But there are no more celebrity chess players. As a society, fearful of what it fully takes, we’ve moved on.

Occasionally I wonder what could have been. During my last year of high school and first year of college I played daily. I was unbeaten in my high school chess club career and can remember the only two times I was bested in college. I did it all on natural talent; I never read a chess book or studied it except during those excruciatingly long matches where I imagined the game unfolding, creating visualizations of the game board and piece positions as I processed all the possible and likely responses to all my potential moves and then how I would go about countering three or four moves ahead. I anticipated better than my opponents, and I wore them out. But that just made me good. Toward the end of my senior year of high school, Joe C., a younger classmate, was rocketing up the chess club ranks. Joe was enthusiastic but had been considered an easy win. We had a ladder system that permitted ranking matches no greater than two rungs from one’s current position. Joe was climbing the ladder like a fireman into a four-storey inferno. By the time my tenure in the club had run its course he had ascended to 4th position, but we never played. The following year Joe was undefeated – undefeatable. I learned later that Joe had been reading about chess. He was studying chess, learning series of moves that could be recalled from memory instead of painstakingly recalculated in the moment. At least in the critical opening, he already knew what moves to make without having to think about it. Lesser players were no match for Joe, first because he knew what they were going to do before they did it, and later because they knew he knew.

Joe was putting in the effort, practicing to get better between matches, irrespective of the competition or lack thereof. That was the lesson I didn’t learn until I got serious about being a musician, and then it was all over for me and chess. I can count on one hand the matches I’ve played in the past twenty years, and that’s too bad, but perhaps I’ve spared myself negative attention. I’ve taken my enthusiasm for games to the hinterlands, finding there like-minded board game geeks excited to try something new and different. If it is this diversity that has contributed to the emasculation of chess then Western Civilization may be no less intellectually engaged, if no worse off for the trade. Chess will be alright. It is timeless and things that are timeless rarely exhaust their supply. People have tried to dust off chess boards in favor of exciting new implementations. Star Trek’s “3-dimensional chess” was a precursor to myriad variations, including a spherical board using magnetic pieces and which must be spun upon the finger of whose ever turn it is or risk resignation. I’m only half joking.

When this generation’s gamers exhaust their desire for new worlds, will they go back to games like checkers, backgammon, go, or chess? I think so. As with wine, where snobbery is being slowly buried beneath a closely guarded respect, the same can happen for chess. It will become novel in a way that is not feared, and then people will try it again and introduce friends and relatives, daughters and sons. It will again be a good thing to be known as “good at chess.”