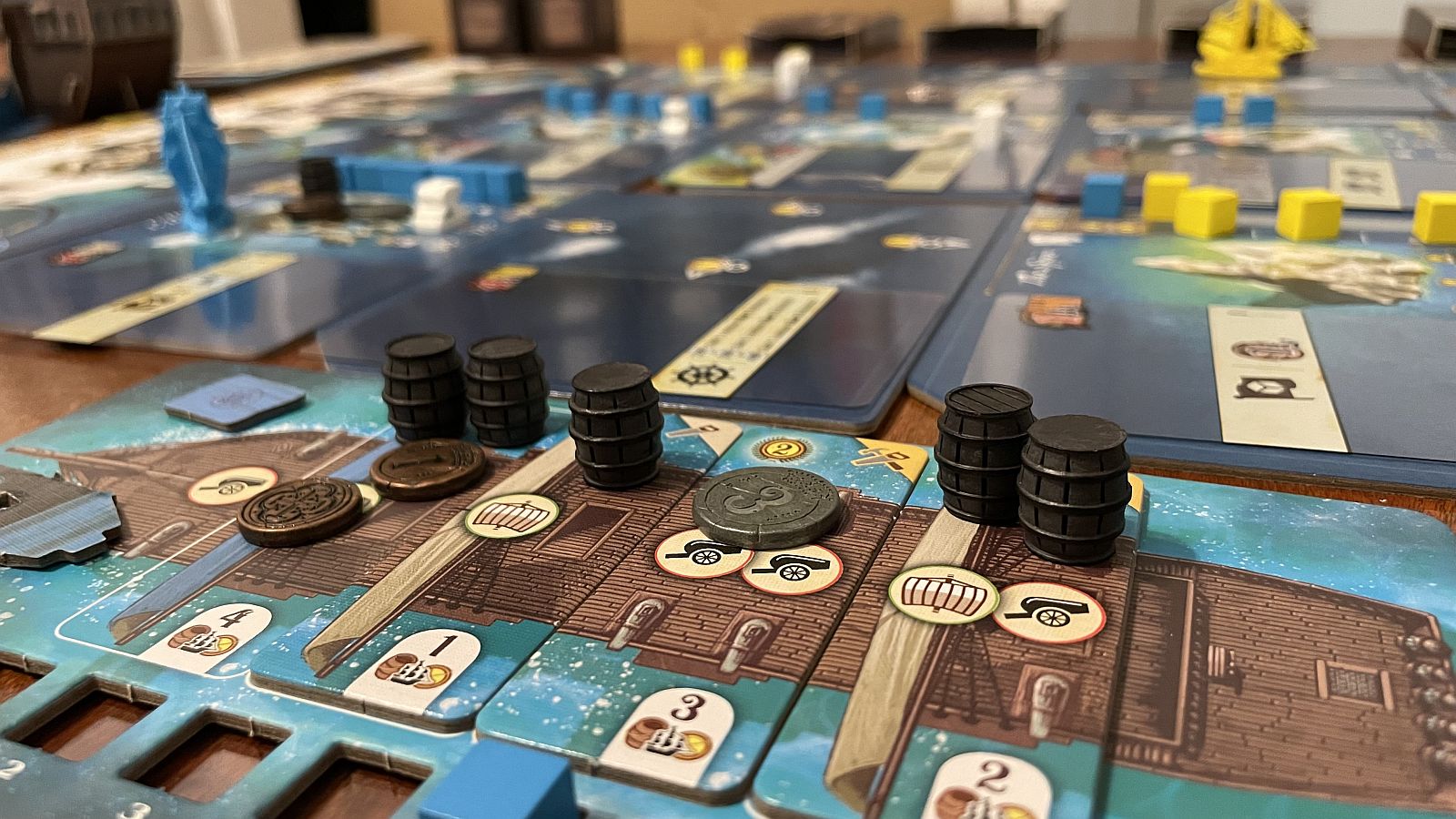 Hello and welcome to the first edition of the “Does it Solo?” series. If you found your way here and have no idea what this is, check out the series introduction below.

For the first edition of the series, I am looking at Dead Reckoning from AEG. Why? Because it is what inspired this series and until I know anyone is reading and/or submitting suggestions, I get to pick where we go. I am the captain now (pirate pun).

How does it Solo?

The Dead Reckoning solo mode as well as the regular game is all designed by John D. Clair. It operates using what I am officially calling “simulated multiplayer”. Is there a technical design term for that? Probably.

Each round you flip a card for the AI player and execute the listed actions on its behalf. The action cards feature different actions depending on what round you’re on, generally with the AI becoming more formidable and doing more stuff as the game goes on. Other than that, the game plays exactly the same as the regular game. 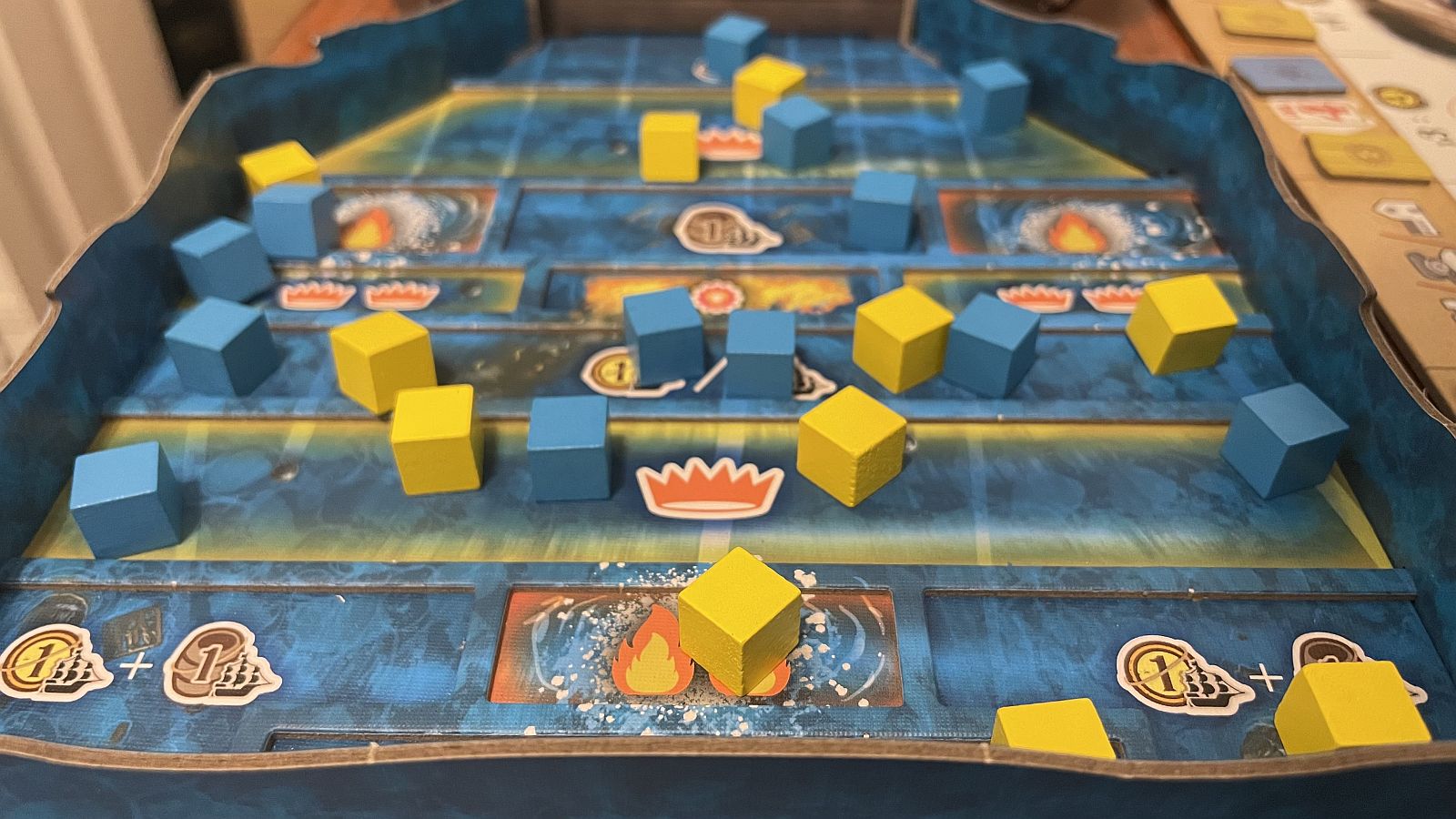 So, does it solo? I’d say, YES. It’s probably no surprise that I enjoyed the game that spawned this whole series idea, but you can pretend you were on the edge of your seat with anticipation if you want to.

First off, I love the normal game of Dead Reckoning. I’ve only been able to get a game together twice though. Once at 4 players and once at 2. I’ve played the solo game 12 times now. While you do get used to the AI playstyle and can anticipate some of its actions, it succeeds at really simulating another player in the game without altering anything that makes the game great. John did an excellent job having the AI follow the normal player arc of a game and it really feels like it interacts with you in ways that a real player would.

I may just be bad at the game but so far I’ve been playing on normal difficulty and have an exact 50% win rate. The difficulty scales up to hard, expert, and extreme if you find yourself having too easy of a time.

If I had any complaint it’s that I wish I had another AI deck with maybe a different playstyle focus to add in for a 3 player solo game. The execution of the AI turns is super easy and doesn’t require looking up any flow charts of complex decision simulations so adding more “players” would add very little overhead.

As I expect will be the case with most games in this series, I still prefer the multiplayer experience of playing the game with actual people but I think the solo mode is definitely worth the time and worth getting the game for even if you know you won’t be able to get a real group to play. If you only have the base game, you may play it out and get too familiar with the AI but if you can add in the Saga content, the discovery of the story and cool events keep it interesting and fresh. I hope John and AEG continue to add to the game with more Sagas and some new AI would be great (probably easily done by a dedicated fan with photoshop).

While Gaming Trend hasn’t reviewed Dead Reckoning, you can check out the BGG page for the game here. Have you played Dead Reckoning solo? Want to see a specific game featured on a future edition? Shoot me an email at [email protected] 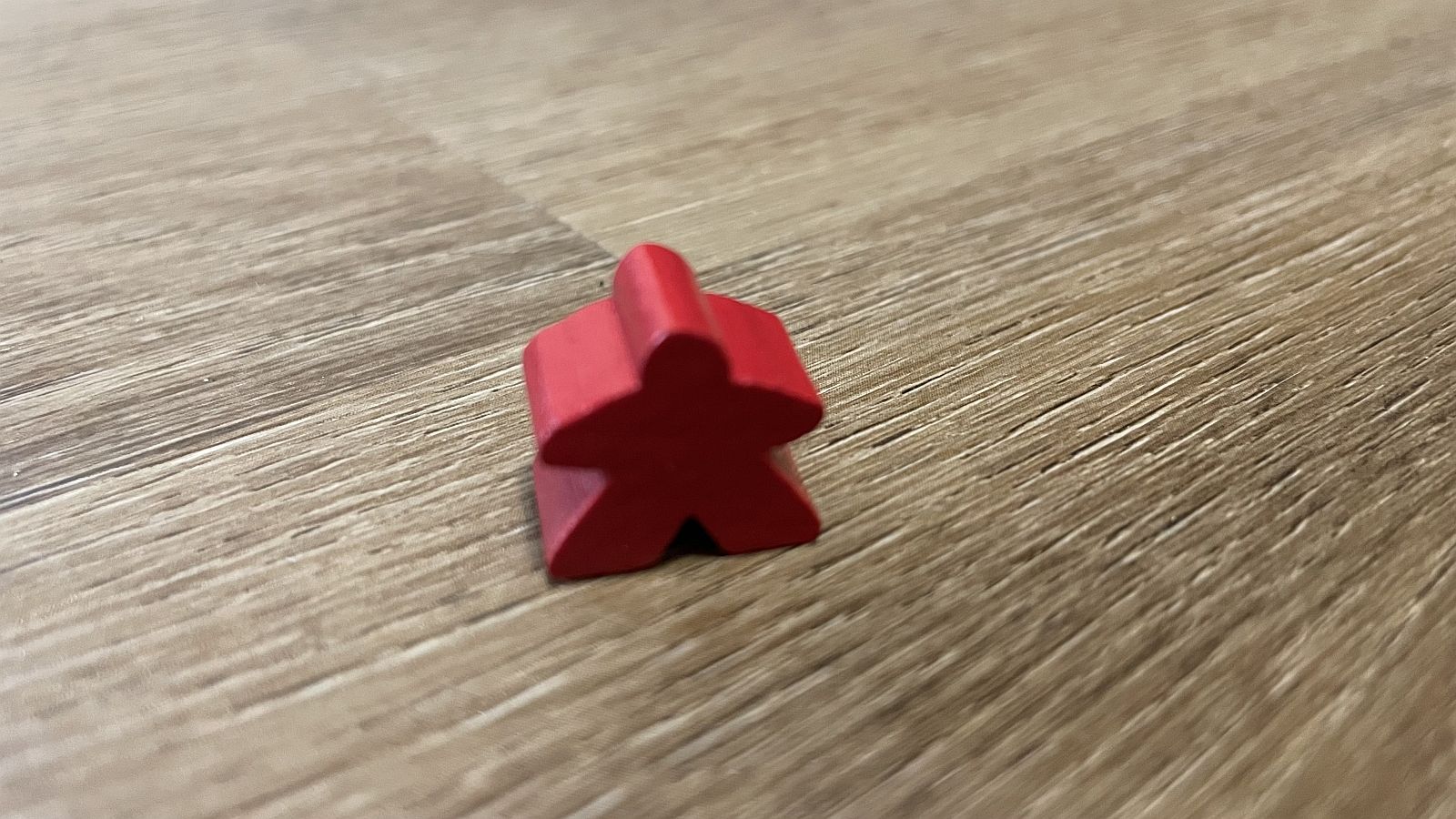 Does it solo? If you’ve been around the hobby board game community for any amount of time or looked at the comments on any major board game crowdfunding campaign, then you’ve seen a variation of that question before. In this series of blogs/reviews/lets plays we are going to ask that question of our favorite games and maybe the ones you suggest to find out.

To start out, I’m going to introduce myself to give some perspective to my opinions as well as lay out some ground rules for what qualifies a “solo mode” for this series.

Right up front, I will tell you that I am not a solo gamer by choice. I was a long time member of a pretty active board game club, shout out to the Colorado Springs Board Game Club, but recently moved away for work and also welcomed my second child. Those of you with kids will understand the struggle of trying to find game time while also being present for your family. In fact, I’m currently typing this with a one year old sitting on my lap and occasionally mashing my keyboard. Yay. So with work, a new location, and increasing family commitments, I just don’t have the time or ability to attend game nights in my current phase of life. The problem is, I love board games. So what can I do? Solo gaming seems to be the answer.

Side note: non-parent gamers, why are all your game nights at 5pm on a school night?

A couple years ago I could be heard deriding solo gaming and making such comments as “why not just play a video game?” or “every game doesn’t need a solo variant”. One of those comments I’ve reversed on. There is something about the physical medium and the challenge of a board game that you just can’t get from a video game. Plus I don’t have to fire up my computer and wait for updates and downloads to eat into my already precious game time. The other comment I still stand by and that is what this series is all about. It seems like every new game that comes out has to have a solo mode. In this series we will try to find out which ones are worth our time and which ones are not.

Now for the ground rules.

1) I am only considering games with official solo rules.

Multiplayer games that “can” be played multi-handed or against yourself will not be considered, at least not while I am the sole contributor to the series. To me, playing multi-handed is tedious and my brain just will not allow me to play anything against myself. To confuse the waters, I’d consider a game like Gloomhaven to be multi-handed and not to qualify but something like Descent or Imperial Assault with multiple characters but no hand of cards to worry about tolerable. It’s my series, I get to make the rules.

2) These are not going to be reviews of the game itself, but specifically of whether the solo version of the game is worth checking out.

If Gaming Trend has done a full review, I will link to it but this series is going to be a little non-standard from a normal game review you’d find on our site.

3) I am not going to be teaching the regular game.

I am going to assume you are familiar with the basic gameplay but will cover changes to the rules that the solo mode requires. For a full breakdown of the normal game, check out our regular review if it exists or else I will link to the BGG page.

For other rules, there are no other rules. That may change as we progress in the series and I think of new things. If that happens, this introduction will be updated.

Is there a game you’d like to see us check out? Want to share your opinion or tell me I’m crazy or wrong? Shoot me an email at [email protected] and maybe you’ll see it in a future edition.