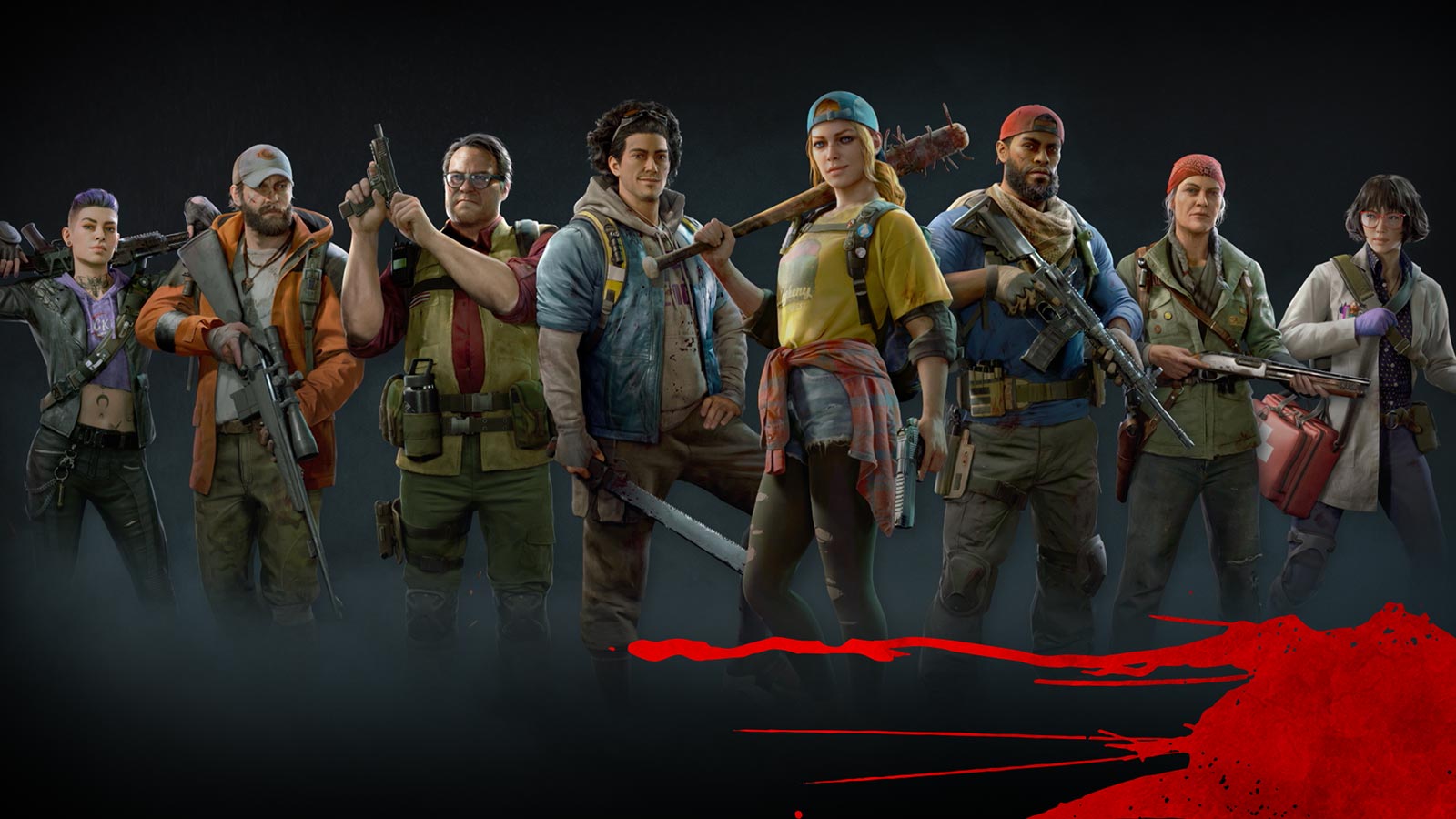 You guys know I’m a huge fan of Deep Learning Super Sampling because…well, it’s literally free frames.  Thanks to the neural network that NVIDIA has built, our favorite games (including more than a few upcoming goodies like Marvel’s Guardians of the Galaxy), owners of an RTX card can realize some impressive framerate improvements. Recently-released Back 4 Blood (Our review) shipped with some nice DLSS implementations, so I thought I’d jump in and take a closer look.   You can see our “Eye Test ” showcase with the PlayStation 5, Xbox Series X, and PC side-by-side below, but in this article we’ll get a closer look at the available options, what they do, and what you can expect out of Turtle Rock’s game on PC.

Heading into the options in Back 4 Blood, you’ll find four DLSS options — quality, balanced, performance, and ultra performance.  In the video below, we’ll go through each, showing the effect of setting, as well as a framerate count for 4K, 1440p, and 1080p.  All of the tests were conducted at max settings on an Intel 10700K processor with 32GB of DD4 at 3600 MHz.

Benchmarking the performance of Back 4 Blood shows some staggering performance gains.  On a 3080 Ti I don’t have any trouble running the game at frankly obnoxious framerates, as you’d expect.  With DLSS set to Quality, I see an average of 215 frames per second.  Bumping that down to balanced sees the framerate climb to around 219fps.  Performance again sees the framerate climb to around 222fps, with Ultra Performance hitting as high as, and I can’t believe this number, 385fps at 1440p.

DLSS works best when the GPU is fully or nearly completely taxed.  Put simply, the 3080 Ti is so much hardware that it won’t realize the full effects of DLSS as well as something like a 3060 would.  So, to test that theory, I loaded up an RTX 3060 and put it to the test.

The RTX 3060 isn’t built for 4K gaming — it’s a 1440p card, primarily, as I noted in my review.  In Back 4 Blood at 4K / Epic settings I saw roughly 40 to 45 fps in common areas and closer to 55 on the range with DLSS disabled.  As shown in our video above, the moment I enabled DLSS we sailed right past the 4K/60 target with the Quality setting enabled.  More importantly, the jagged edges and artifacting went away entirely, cleaned up by the AI-powered tech.  If you want a few extra frames, with almost no visual fidelity change, you can also enable Ultra Performance, hitting a staggering 90fps — more than double!

Rounding things out, I also wanted to test the performance on a previous generation RTX card.  Firing up my Triton 500, I’d be testing an RTX 2080 Super on a laptop platform — roughly the power equivalent of a desktop RTX 2070.  Starting at the 40-45 fps range, just like the 3060, we saw the framerate jump all the way up to 75 at Ultra Performance.  It’s not as high as the 3060, of course, but it’s more than possible to run at 4K/60 thanks to DLSS, and with a bit of visual polish as an added bonus. 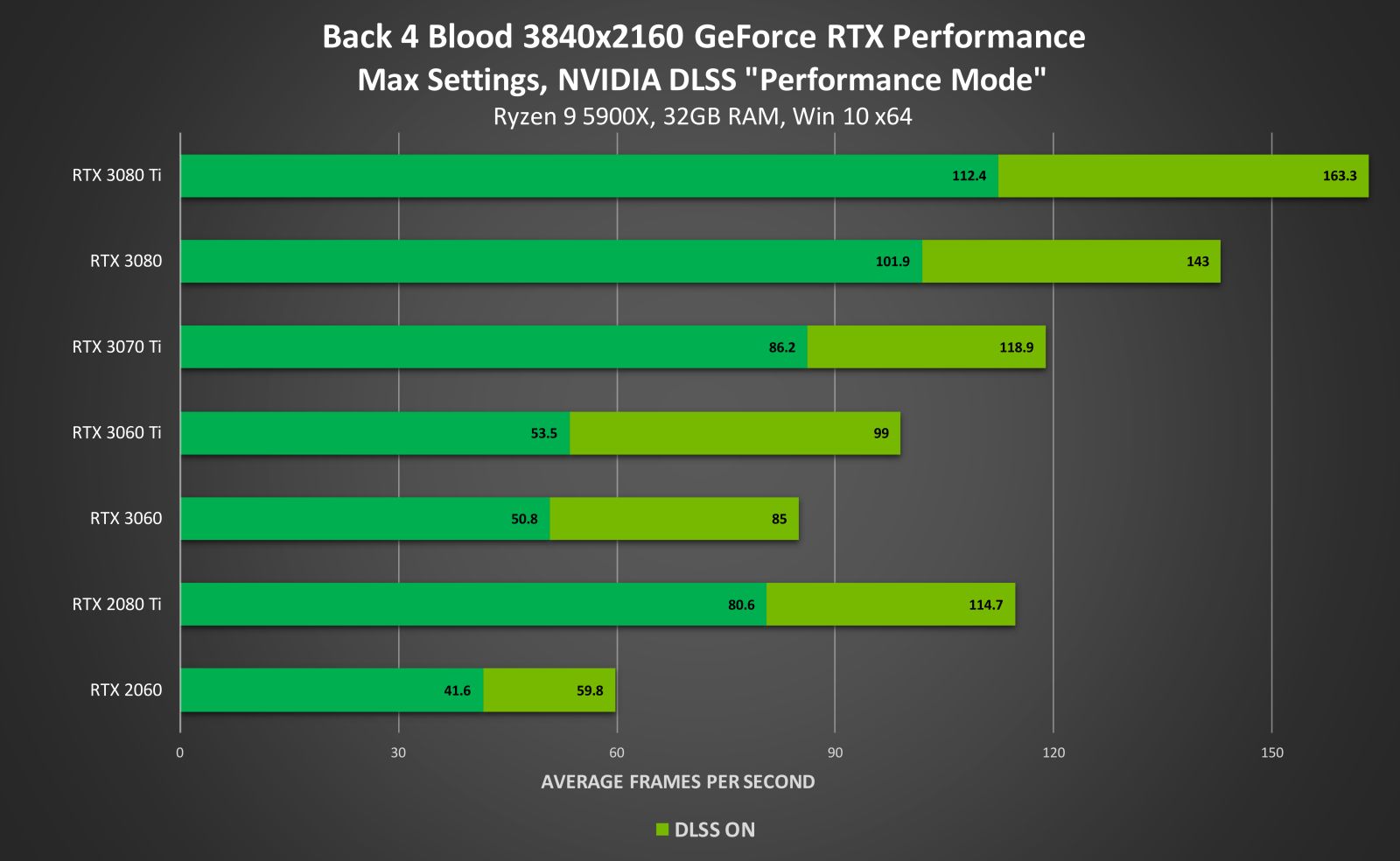 We saw even HIGHER framerates in our testing!

I’ve said “little to no visual difference” several times, but what does that mean, really?  In my video we see several examples, especially at 1080p, of what DLSS can do for image quality.  AI-driven image correction takes aliased frames and runs them through NVIDIA’s algorithm to produce a “perfect frame” to train the system, continuously improving the output. As a result, the AI-trained result can be the same or, at times, even better than the native image.  This presents itself on the straight edges of buildings, but we also see it across the tops of tents.  Where it stands out most is over the fire pit in the camp, and the antenna array on the top of the building.  The diffusion of the heat bloom over the fire makes everything look blurry in the native image, looking unnatural at times.  With DLSS, this is cleaned up entirely, resulting in air distortion that looks more like what you’d see in the real world.

We will see DLSS come to more and more titles this holiday season — it just dropped for Crysis Trilogy, FIST: Forged in Shadow Torch, and Alan Wake Remastered.  Baldur’s Gate 3 and both of the most recent Tomb Raider titles will get an update this month.  Games like Marvel’s Guardians of the Galaxy will ship with DLSS already baked in.  It’s becoming the industry standard way to wring every bit of juice out of whatever video card you’ve gotten your hands on.  If you’ve got an RTX card, it’s as simple as turning it on and reaping the benefits.

Look for our continued obsession with tech and framerates right here at GamingTrend.com

Ron Burke is the Editor in Chief for Gaming Trend. Currently living in Fort Worth, Texas, Ron is an old-school gamer who enjoys CRPGs, action/adventure, platformers, music games, and has recently gotten into tabletop gaming. Ron is also a fourth degree black belt, with a Master's rank in Matsumura Seito Shōrin-ryū, Moo Duk Kwan Tang Soo Do, Universal Tang Soo Do Alliance, and International Tang Soo Do Federation. He also holds ranks in several other styles in his search to be a well-rounded fighter. Ron has been married to Gaming Trend Editor, Laura Burke, for 21 years. They have three dogs - Pazuzu (Irish Terrier), Atë, and Calliope (both Australian Kelpie/Pit Bull mixes).
Related Articles: Back 4 Blood, Hardware
Share
Tweet
Share
Submit