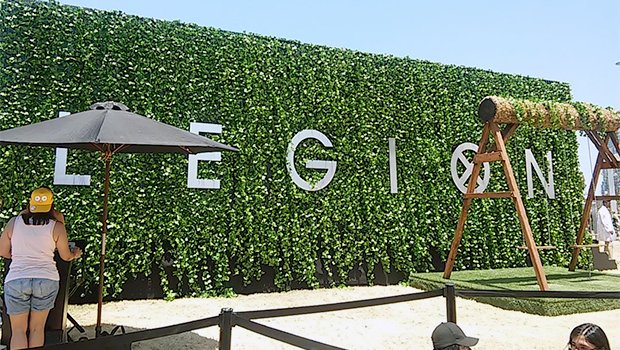 I’ve been a fan of the comic book character David Haller, codenamed Legion, since I was first introduced to him one Saturday morning on X-Men The Animated Series. Since then, I’ve been fascinated by his volatile combination of outrageous psychic powers and unstable mental condition. Last year, Wednesdays became my favorite night of the week, as that was the day that FX aired its new series, Legion, a show which tells the story of David Haller from a far more human perspective, free of spandex super suits. I fell in love both with the portrayal of David and the cinematography of the show, but also with how the storytelling itself leaves both David and the viewer confused as to what is real, what is imaginary, and what is dangerous.

While at San Diego Comic-Con, I was invited to visit the FXHibition and experience Sessions: the Legion Mixed Reality Experience. Beneath the glare of the summer sun, I approach a rectangular, plant-covered building, the word “LEGION” peeking from between the foliage. A man gestures me over to an umbrella, holding up a small device. “Please look into here, I need to test your IPD; the configuration for your eyes.” He doesn’t explain further. I peer into a small contraption as he measures the depth of my vision, then writes a number onto a wristband. “Now, we need to get this on,” he explains, slipping a medical band around my wrist and navigating the end though a complex set of loops. “You can go inside and try to survive–have fun,” he smiles, gesturing towards a door. I glance at my wrist as I walk towards the door, and see the words “HALLER, DAVID” printed in bold, black letters. I step up to the door and am met by a small woman, smartly dressed, with an intense gaze.

With my medical bracelet in place, I step into the experience as David Haller

I am David Haller. I am Legion.

“Do you remember me?” She asks without introduction as she guides me inside, collecting a clipboard. I answer no. “That’s ok, these things sometimes happen when your power manifests. Do you remember Ptonomy?”

“He sent me,” she explains, gesturing to a man, who comes forward with a contraption in hand. I know it’s a HoloLens, but an irrational part of me is slightly uncomfortable with all of this. “You’re like me, only much more powerful. We need some information, but first we need to test your powers.” The HoloLens is placed on my head, and I help adjust it to my face. “We need to configure the machine,” the woman explains as she runs me through a series of tests. I look at triangles, adjust the goggles until corners are aligned, and gesture in the air before me. I am abruptly stopped. “I think that’s enough. Let’s move on.”

I’m ushered into an empty room and told to sit. She closes the door behind me, I’m left alone in the dim light, a cacophony of voices filling my head. Sketchy figures dance before my vision, three cards lay face down on the table, a Newton’s cradle clacks loudly to my left, a lion figurine stares at me just off to my right, a familiar lamp whose shade forms constellations, rests on a shelf on the far wall. They’re not really there, they’re projected into a narrow field of my vision by the HoloLens. They may not be physical, but they’re still real to me, slipping in and out of reality as I look around the room, moving the rectangular view of the HoloLens across the dim interior.

“Pretend the voices are a radio,” a female says, her voice filling my mind. I know it’s the speakers in the HoloLens, but it’s still unnerving, given the empty room. It’s Melanie Bird, mentor and mutant resistance leader from the show. While I know this is a recorded voice, that she isn’t really here, I’m still grateful to have someone familiar helping me through this rather creepy experience. “Grab the knob and turn the volume down.” A radio sits on the far wall, out of reach with a desk between it and myself. I reach out into the empty air, pinch my fingers around where I see the knob, as if pretending to grab the sun, and twist the volume down.

“Follow the sound,” Melanie urges. I look back to the Newton’s cradle and hold out my hand, palm facing the perpetual motion toy. The balls stop. The silence is deafening.

“This is just a memory,” Melanie assures me. “Nothing here can hurt you here.” A man enters the room. He’s wearing a suit, carrying a clipboard, and looks frazzled and annoyed. “David, do you remember where we left off?” He asks, sitting across from me. He scratches his eyebrow with one thumb, leaning on the desk with one elbow, keeping his clipboard close so I can’t read it. “We need try testing your powers again.”

Melanie’s voice is gone, and I’m left alone with a man watching intently as I follow his instructions, using the direction of my gaze and hand gestures to levitate and teleport objects. I know he can’t see what I’m seeing, but he’s so dedicated to his role, patiently and intently looking where I’m looking, speaking the moment I successfully manipulate an object, and not a moment before. It’s both impressive and incredibly eerie, so much so that I don’t immediately notice that the whispers are back, building slowly but steadily inside my mind.

“David.” Another voice breaks in, this time it’s Sydney Barrett, my love interest and fellow mutant from the show. “David, you have got to listen to me. This isn’t a memory, Ptonomy didn’t send you here, you’re in danger. I’m going to help you, but for now you need to play along. Do what he says.” I’m trying to play it cool, to not react, but I’m honestly starting to feel a little less than sane.

“Ok, David,” the man, who has never given me his name, says. “I want you to levitate all three of these cards.” With a wave of my hand, the cards, a projection of the HoloLens, float in the air before me, their patterned backs facing me. “Good. Now, David, I want you to tell me what’s on the cards.” He begins looking, slowly and deliberately, from one card to the next. I hear Syd’s voice, distant and unclear among the whispers, which are growing louder and more persistent yet again. I know she’s saying something, but I can’t hear her over the noise. I lean forward, I squint my eyes, I strain my hearing. She gets louder, but she’s still not clear enough, her voice lost among the myriad echoing in my ears.

“David!” She suddenly comes in loud and clear, “You’re in real danger, I’m going to switch places with him in a moment, but I need you to play along until then. Nod if you understand.” I look the man in the eye and nod. He nods, a hint of a smile touching his mouth, then frowns. “He needs an answer, David,” Syd reminds me.

I focus on the cards again, taking a deep breath, trying to focus despite the mounting pressure I’m feeling. The far left card flickers momentarily, a square flashing for an instant, at the same moment that the whispers all coalesce into the word: Square. I point and give the shape. The far right card flickers as the voices confirm what my eyes only briefly saw: Triangle. Finally, the middle gives up its secrets: Circle. The man nods and leans back in his chair. He picks up his pen, about to take write something on the clipboard.

I feel myself being pulled towards the door, but the warning falls on deaf ears. I look over my shoulder and find another person in the room. The Angriest Boy in the World scowls, oversized head and all, silently from the far corner. I have no idea how he got in, nor how long he’s been there, but he is very real, not a projection of the HoloLens. As soon as I see him, he takes one, lurching step towards me. My heart leaps into my throat.

The door slams behind me, two people in white lab coats wait for me in a narrow white hallway. “Did you have fun?” A woman asks, her smile shattering the spell cast by the previous room.

The FXHibition Legion Experience at San Diego Comic-Con gave me few, brief minutes in the world and mind of David Haller, and created a surreal and rather horrifying experience. It gave me not only an unforgettable memory, it also provided an incredible, first-person insight as to what it really feels like to be Legion, one my favorite characters. While perhaps not for the more faint of heart, I walked away from the Sessions: The Legion Mixed Reality Experience with my heart racing, my head spinning, a huge smile on my face, and a burning desire to never see the Angriest Boy in the World in person ever again.