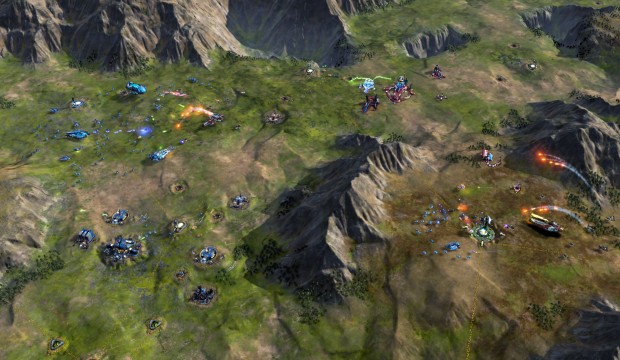 I sat down with Derek Paxton, VP of Stardock Entertainment to get a quick look at Ashes of the Singularity and what the power of Windows 10 and DirectX 12 bring to the table. I was already watching the game pretty closely, but after this demonstration I knew I needed this game to test out my new gaming rig.

War on multiple fronts has never looked this good.

If you are unfamiliar with Ashes of the Singularity, it’s easiest to classify it as the game just about ready to flip the real time strategy genre on its head. Lofty praise, given how much I love the genre, but from what I’ve seen it could very well be true. Ashes looks to take what has traditionally been skirmish-based battle between a few hundred units and expand it to thousands, or even tens of thousands — literally global warfare. If that sounds unwieldy, rest assured that the game already sports a system to handle all of that micro in a macro way.

Using a concept called “Meta units”, individual units can be combined into larger squads. These squads are then controlled as a larger entity, freeing you to command the group. Combining several of these groups pushes that concept up a level, making you a sort of ‘general’ instead of a squadron commander. But how can your PC handle thousands of units, each granted incredible detail and lighting from all directions? DirectX 12.

The game engine behind Ashes of the Singularity is aptly called Nitrous, and was created by Oxide Games. Oxide has crafted this engine to take advantage of every core of the CPU, multiple graphics cards from NVidia or AMD, or even a combination of both. Amazingly, it does this in a time-divided system that allows it to asynchronously access every CPU core and connect it directly with the GPU on your graphics cards. Unlike most games, Ashes of the Singularity will take advantage of every square inch of hardware real estate you can throw at it.

Individual light sources from all weapons.

Derek showed the best demonstration of this power with the lighting engine for Ashes of the Singularity. Rather than a half-dozen or so lighting sources, the Nitrous engine, when paired with DX12, is capable of having thousands of unique light sources. Derek paused the action and showcased individual laser lights, missile smoke contrails, and dirt stirring underneath the vehicles. Zooming in on a larger vessel revealed individual guns rotating as they tracked distant targets. Everything was more detailed than I expected, and even on a lower-spec PC it was running remarkably well.

While it’ll take me a little more time to coalesce my thoughts on Ashes of the Singularity, it’s clear that DirectX 12 is enabling developer Stardock to do things I didn’t imagine would be possible any time soon. By unlocking the pathways between all CPU cores and the GPU, and even granting use of the almost-never-used on-chip GPU, the team at Stardock is looking to take the RTS genre to a whole new level.

Check out the smoke contrails from those missiles.

Ashes of the Singularity is in Beta #2, and we are watching with great interest.  If any of this piques your interest, you can jump in and see it for yourself in Early Access on Steam.