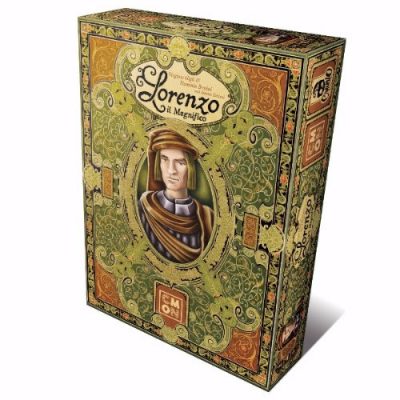 Cool Mini Or Not and Cranio Creations have already been collaborating to bring foreign games to the English language, starting off with Unusual Suspects. This relationship is going to continue with Lorenzo il Magnifico and Council of 4.

In Lorenzo il Magnifico, players control prominent families during the Italian renaissance, aiming to become the most influential among the other players. To do so, they must earn victory points by sending the members of their families out to gather resources, gain development cards (representing a multitude of different things, such as new territory, influential people and more), and put those development cards to use. Of course, the families must also pay their respect to the Church or face hard penalties when the time comes.

At Essen 2016, Lorenzo il Magnifico was highly praised. Designed by Flaminia Brasini, Virginio Gigli (Egizia), and Simone Luciani (Council of 4 and Voyages of Marco Polo), with art by Klemenz Franz (Agricola, Le Havre and Isle of Skye), CMON will present the game with its original game mechanics and visuals.

Council of 4
In the Council of 4, players take on the rolls of rich merchants in a prosperous Empire that’s divided into three Kingdoms. The Kingdoms are each ruled by a council of four nobles. Players will do whatever it takes to obtain building permits for their Emporiums within the Kingdoms’ cities. Bribery and political power struggles abound; even the Queen is not above being swayed, overlooking the need for permits from time to time. The player that gains the most points through connecting Emporiums, having the most in a Kingdom’s cities, obtaining permits, or increasing their rank on the nobility track will win the game. With a modular board, a variety of options are available upon set up, ensuring new strategies must always be considered.

Council of 4 was designed by Simone Luciani and Daniele Tascini (Voyages of Marco Polo and Tzolk’in). While the mechanics remain untouched, CMON is updating the game, including new graphics and high-quality plastic miniatures.

These will be available in the second quarter of 2017, and you can also find more information from Cool Mini Or Not itself.