“Why didn’t I come dressed as a pirate?” My friend Tina asked as we settled in to receive our pre-game briefing for the Davy Jones Experience at Sandbox VR. It turned out to be a valid question; we’re a group of cosplay and video game nerds about to embark on a five-man VR pirate adventure, why hadn’t a single one of us thought to dress up? Fortunately, our lack of pirate attire did not hinder the amazing time we had inside virtual reality while trying to steal Davy Jones’ treasure.

The Davy Jones Experience is a fun, moderately challenging game where four to six players suit up in haptic vests, motion-capture wrist-and-foot straps, and wireless VR rigs in order to steal the treasure of the infamous pirate. Once inside, everyone picks a pirate avatar, selects their one-handed weapon of choice, either quick-firing crossbow or a brutal but slower pistol, and designates a team leader by selecting one person to carry the team’s torch. 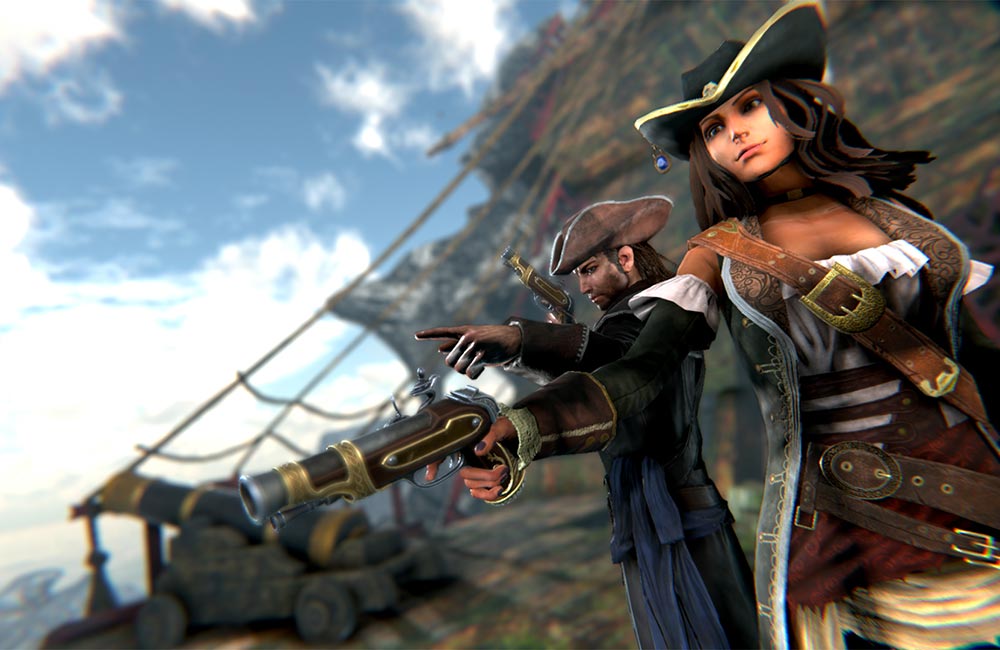 …But I’m getting ahead of myself. First, we were given the task of naming our motley crew. After much debate, we wedded our hunger for pirate treasure to our love of now-obscure 2011 memes and named ourselves The Booty Quest. With that monumental decision out of the way, we jumped into virtual reality and found ourselves beneath the sunny skies on the open deck of a ship with a mouthy little parrot who kept trying to tell us what to do. We collectively and immediately united against what was supposed to be the colorful animal mascot of the group, shot the red barrel to start our adventure, and quickly found ourselves fighting off wave after wave of monsters, ghosts, and undead pirates.

The Davy Jones Experience is very similar to Deadwood Mansion; an intense and rather terrifying VR zombie wave shooter which Sandbox VR also offers, though Davy Jones proved to be a little less scary, a little easier, and actually provided a little more diversity in its gameplay. Despite being confined to the ship, we encountered a number of different enemies, most of which could be taken down in a number of ways. For most, simply shooting them repeatedly did the trick, while others were best dispatched with a swift and very satisfying kick. Some enemies you had to avoid entirely, while others could be felled by repeatedly blasting them with arrows and musket balls, but went up in literal smoke if you set them afire with the torch. 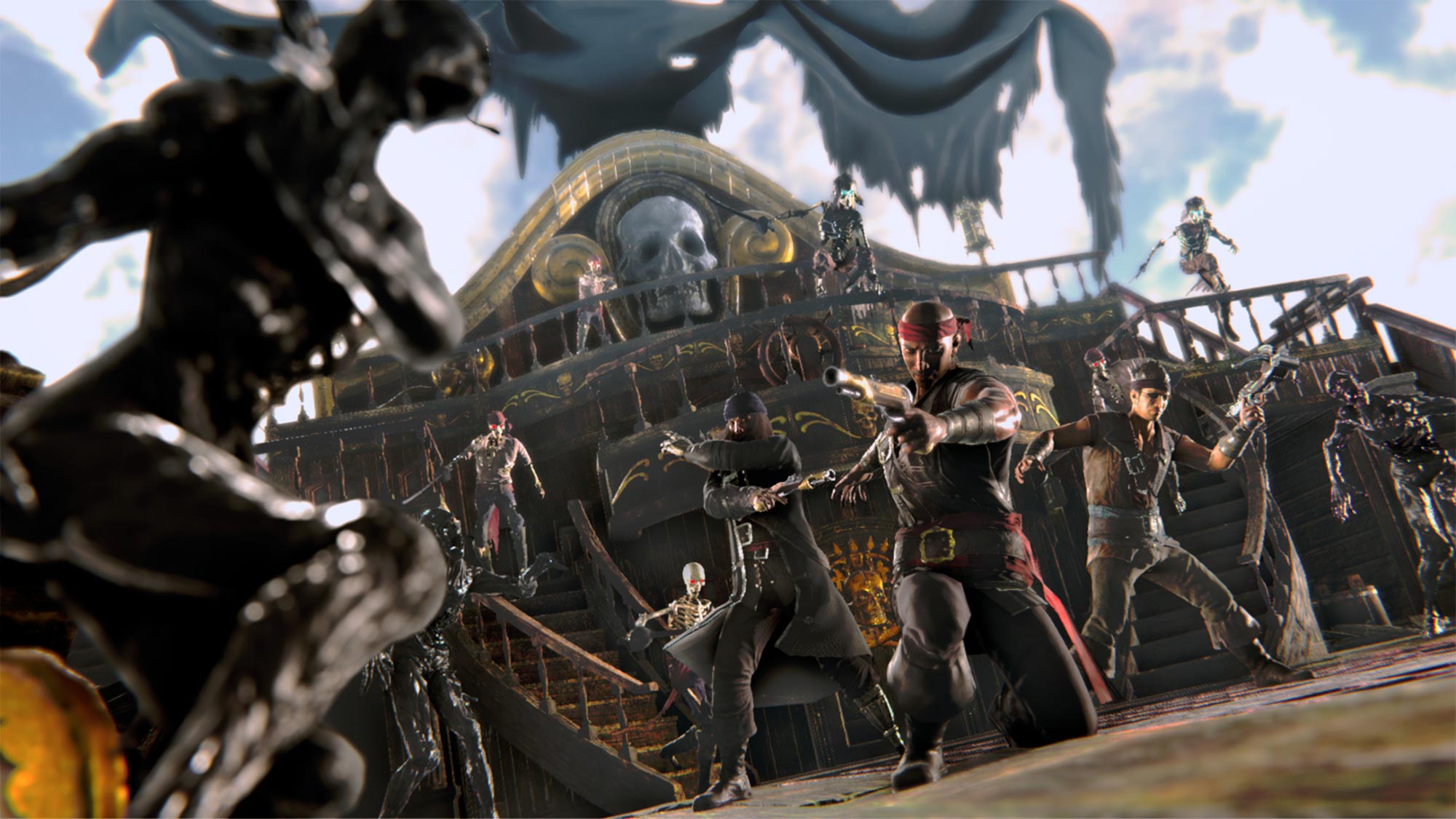 Using our brains was not restricted to simply figuring out the most effective ways of dispatching our foes; we also had to observe when new weapons, such as the ship’s cannon, became available for use, and we even had to join forces and pass the torch round in order to solve a puzzle. The gameplay area, a large, empty, bright green rectangle for anyone not strapped into a VR visor, was large enough to allow all five of us to move around, dodge large, amorous ghosts, cover each other’s backs as waves of baddies poured in from all sides, and allowed us to do so without constantly running into each other–a real gift, as I played the experience with an inconveniently broken bone and no cast.

Cooperation and communication is key to this experience, and not just for puzzle solving. We quickly and innately created code names for the areas baddies most commonly poured in from, called for help when we weren’t able to single-handedly hold one of those points, and shouted for a revive whenever necessary. Did I mention you can die in the Davy Jones Experience? Take too much damage and you’ll become a ghost, at which point you float helplessly within the game. You can move around, but you can’t help out your teammates. Any living teammate can revive a ghosted ally by resting a hand on their shoulder for a few seconds, a nice tactile addition to the virtual experience.

In the end, my crew and I were not only crafty enough to steal Davy’s beloved treasure, but we also survived the final assault by his offended ghost–impressive, as I’ve only managed to survive the final onslaught once out of the three times I played Deadwood Mansion. This experience is both easier and a little less terrifying, making it a better family experience than Deadwood, but still plenty entertaining for adults. My crew consisted of both VR veterans and newcomers, and our MVP, the player who did the most damage, had never played a room-scale VR experience before. That said, my pride requires me to point out that she was also the one who was in charge of the torch, which gave her a distinct advantage against several enemy types. 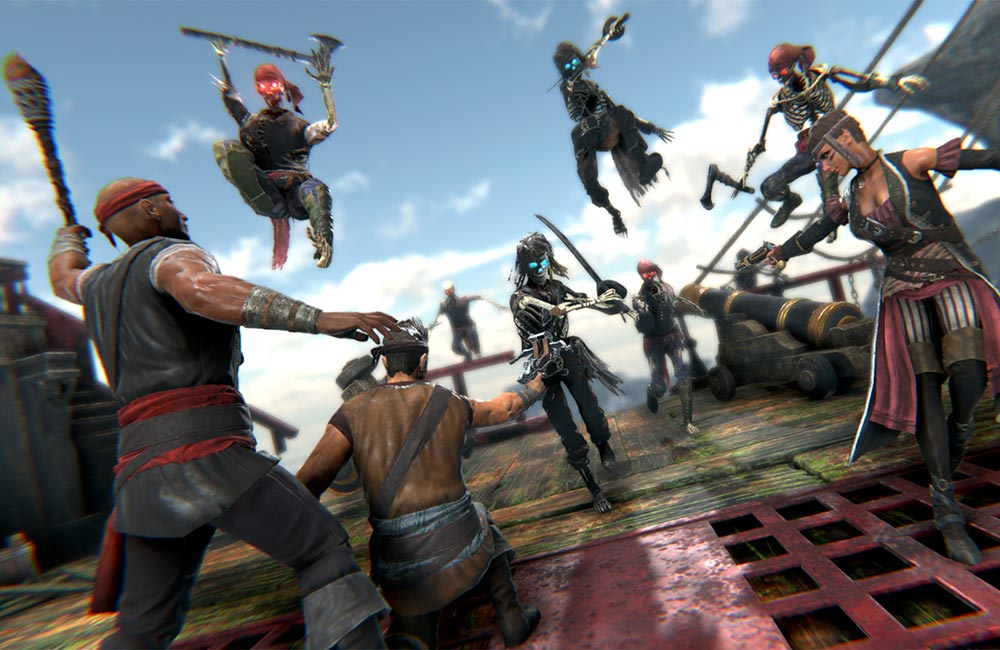 All in all, Davy Jones was a delightful experience, and we even walked away with two short video trailers of our adventure which knitted together our physical selves and our pirate avatars. It was a decent workout, and we stripped off our gear sweating, laughing, and ready to jump into another VR adventure. We walked away with a souvenir to boot–Sandbox VR provided the video seen above, as well as a nifty scoreboard page so everyone can show off your stats to their friends.

You can challenge the Davy Jones Experience at your local Sandbox VR; we were lucky enough to get a sneak peak at their newest location in Woodland Hills, which opens September 23rd. A whole host of new experiences are coming to Sandbox VR, including pirates, zombies, fantasy, futuristic worlds, and even a one-on-one VR fighting game, and we here at Gaming Trend can’t wait to experience them all.