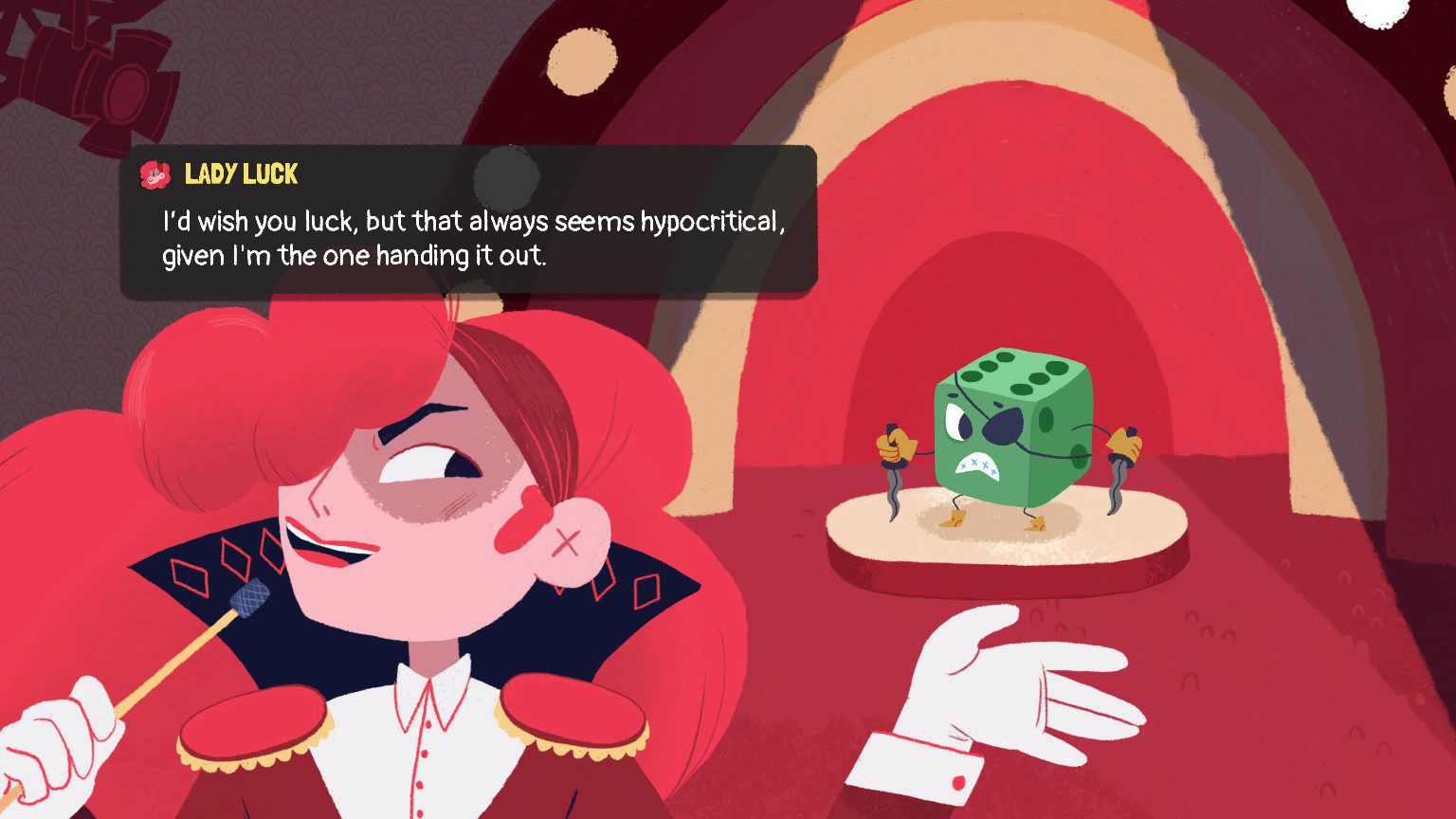 I’ve never understood the appeal of deck building games; there’s usually too many pieces and numbers to keep track of for me. It’s like a puzzle where all the pieces can fit together, and you have to draw the picture on top. But Terry Cavanagh’s newest dungeon crawling and deck building game Dicey Dungeons was just too cute for me to pass on. From the uniquely adorable designs of the dice protagonists, to every enemy, to Lady Luck herself, practically everything in this game is cute as heck. And while I came for cuteness, I must admit, I stayed for the decks.

Dicey Dungeons is a gameshow, hosted by Lady Luck, in which the contestants are turned into dice and must make their way through a dungeon. After surviving the dungeon and defeating its boss, the contestants get a spin on the wheel to see if they win their heart’s desire. You can play as six contestants: the warrior, the thief, the robot, the inventor, the witch, or a secret unlockable character. Each has their own special abilities and card pools they can draw from as well as their own set of episodes with unique twists on the normal gameplay. These episodes can vary wildly in difficulty, but the first is usually the easiest and you have to beat that before you can unlock others. Initially, you can only choose the warrior and his first episode, so we’ll use him as an example. 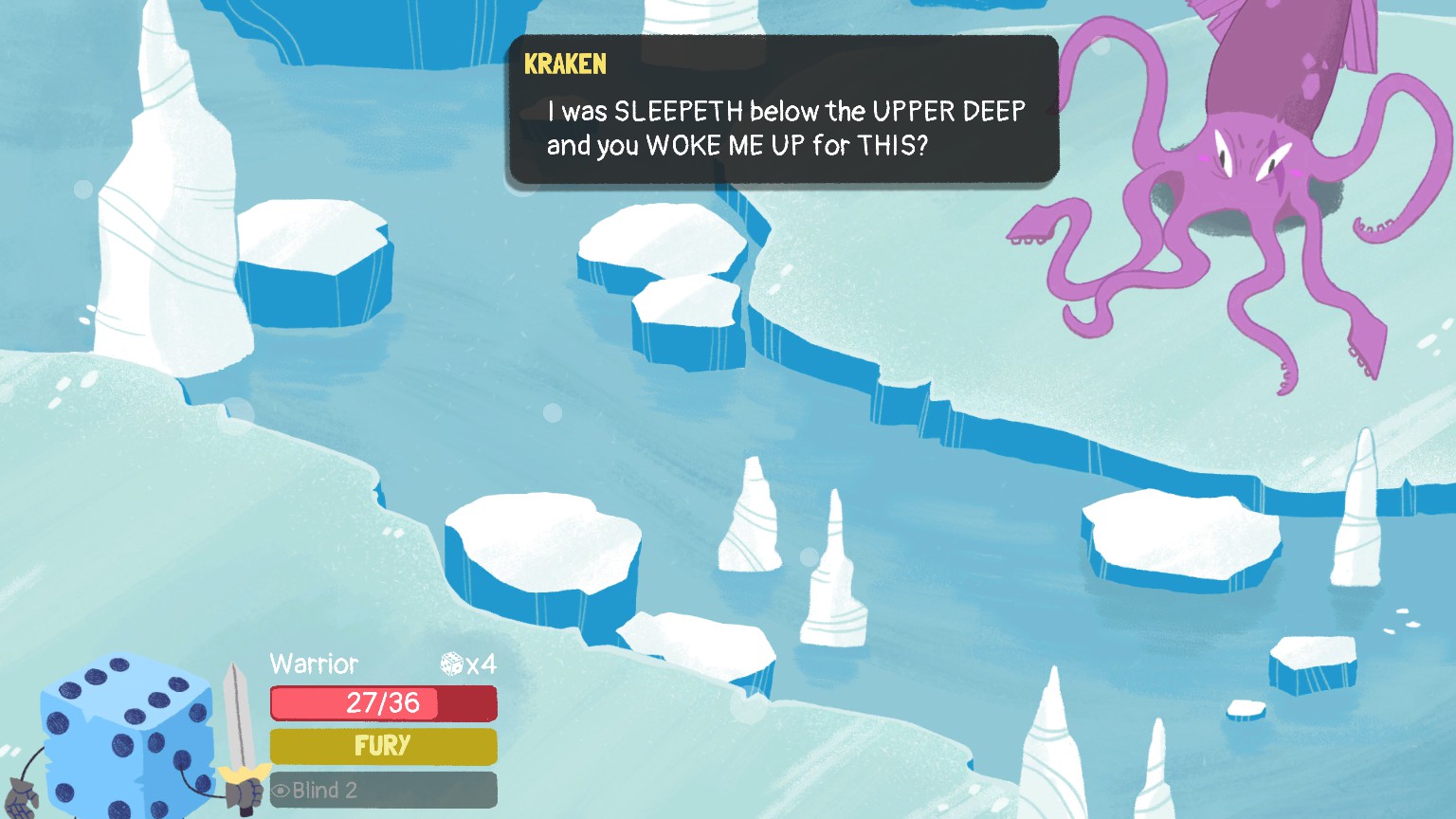 The warrior is the most basic of all the characters, he begins with a single damage card and an innate ability to reroll dice up to three times per turn in combat. Each turn, you roll a set number of six sided dice, usually determined by your character’s level, and can place those dice into cards to perform the action on the card. Some cards’ effectiveness can vary depending on the number on the dice face, or require odd, even, a certain number just to activate, among other factors. You can manipulate the dice or cards to an extent during combat using your character’s ability card or their limit break, available once you take a certain amount of damage. Your opponent has their own set of cards and dice, and you battle while listening to some amazing music until one of you runs out of HP. All this may sound complex, and it is, but it’s very easy to understand once you start playing or see the game in action.

Between battles, you explore the randomly generated dungeons using a simple map screen. You can find chests to get more cards, wagons to shop at, an exit leading to the next floor, and enemies to battle. Planning your route through the dungeon can be as strategic as building your deck: do you risk fighting this enemy to get to the chest behind them, or just make a break for the exit? The game has you constantly making interesting choices which can ripple through to affect the rest of your run. But in a lot of my runs those choices ended up not mattering at all because of a few bad rolls. If you get a few turns with unlucky rolls or the enemy gets a few good rolls, you can go from full health to zero very quickly. This seems like it would incentivize building a diverse deck that can use any dice, but often when I tried that battles would become a slow slog towards my eventual demise because I couldn’t do enough damage to defeat my opponent. Each character can manipulate the randomness somewhat, but in my time with the game it never felt like I could prevent a few of these deaths. It can be aggravating when you have a good deck, only to meet defeat because the enemy forced you to roll all ones. However, the brevity of each dungeon, the absolutely adorable aesthetic, and killer soundtrack all help to keep you from getting too annoyed. 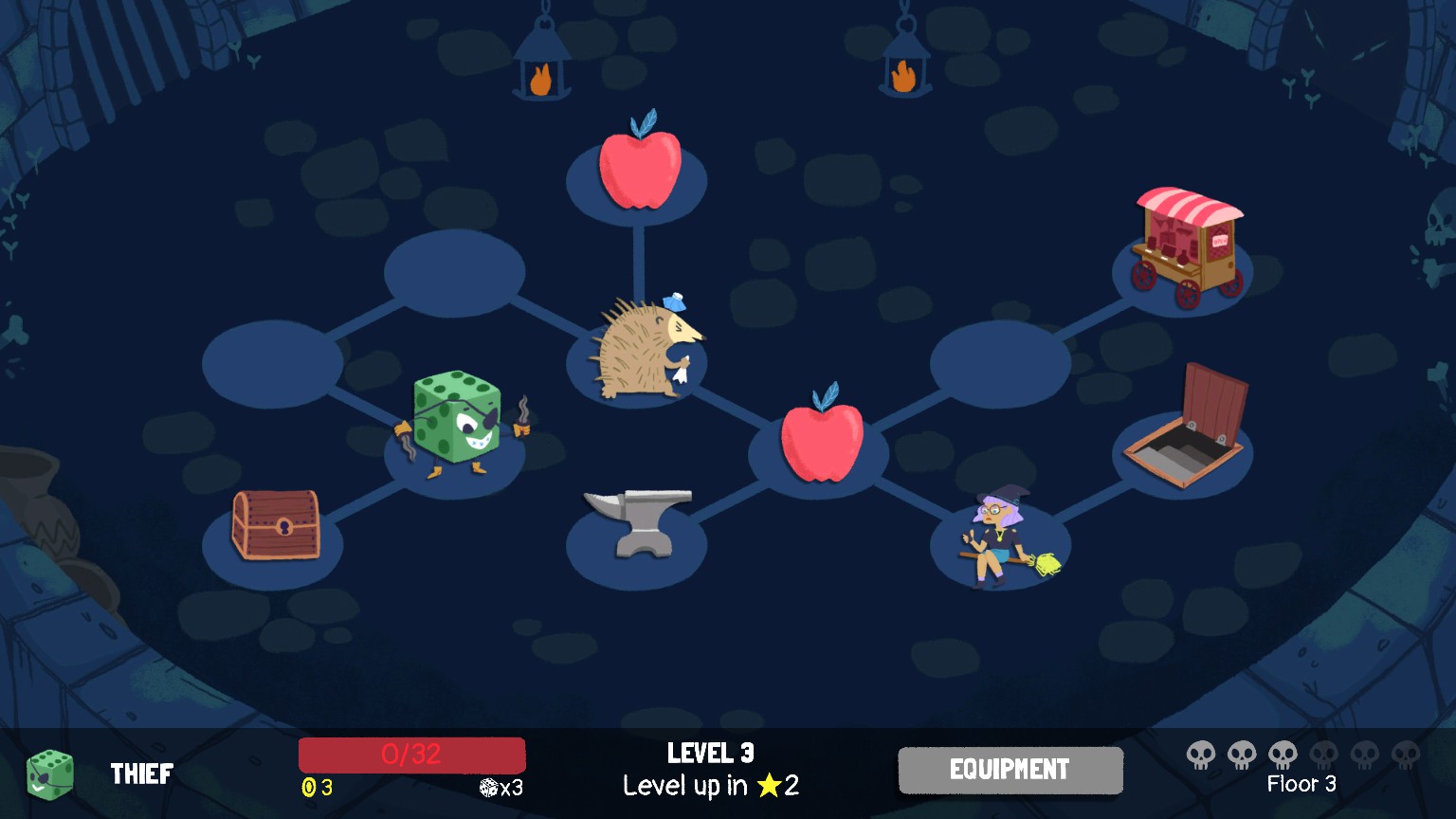 I’ve mentioned the aesthetics and soundtrack quite a few times in this review, that’s because the art and sound for this game is exceptional. Every character design is incredibly cute, and also conveys their personality or playstyle very well. The warrior has a few chips in his dice form, showing you he can take quite a few punches, but he’s still always smiling. He may be trapped on this gameshow, but he’s having a great time. Battles are introduced in a nice game show-like fashion as well, with spotlights coming down and shining on the screen along with a flashing sign that reads “Fight!” The game commits to this style and it works very well, especially the character selection screen which introduces each contestant nicely. The chiptune music I’ve also mentioned quite a few times somehow pumps you up while putting you in a strategic mood. There aren’t a ton of tracks, but I don’t think I’ll get tired of listening to them any time soon. Seriously, if you take anything from this review it should be that you need to listen to the soundtrack.

Finally, we come to actually building your deck. With the exception of the witch, each character has a 2×3 grid in which they can place cards to bring into battle. Some cards take up two slots vertically, while others take up one. Any cards not in your hand go in your backpack to swap out later. Just figuring out how to fit all the cards you want into your hand can be a fun challenge; you can upgrade some cards to take up less space for example, but how often you switch up your deck will depend on your character. For the warrior and thief, I tended to find a set up that I liked for each run and stuck with that, but with the inventor and the witch you’ll constantly be changing your deck. 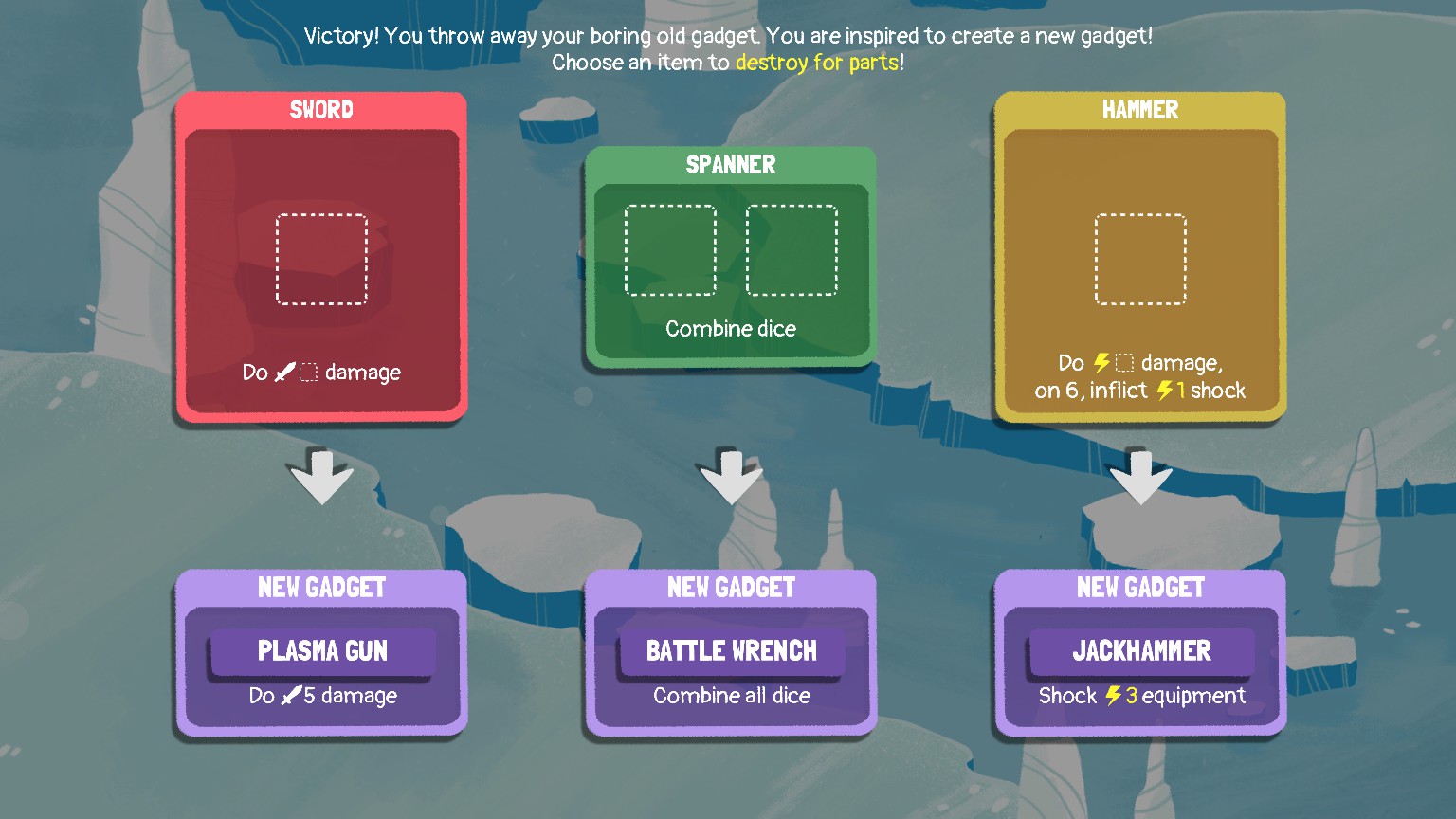 After every battle, the inventor becomes inspired and must choose a card to dismantle and turn into her innate ability for the next fight. This was annoying at first, but she quickly became my favorite character to play as this mechanic tied the deck building and exploration together nicely. I would fight some enemies on the map just to sacrifice a card for a better ability to use against tougher monsters, or skip some to save an ability I liked for later, or even take some very good cards out of my deck to avoid losing them. In contrast to the other characters, the witch only has a 2×2 grid to place cards on, but she places cards, or spells in her case, into her hand during battle. She has six spells she can memorize which she can then place into the grid by sacrificing a dice of the corresponding number. She can even replace a prepared spell immediately after using it, but she can’t store spells outside of her currently memorized six; if you have six memorized and want another, you’ll have to replace one of them. This is easily the most complicated playstyle of all the characters, and supposedly the most rewarding, but I could never build a deck for the witch I was satisfied with.

All in all, Dicey Dungeons is a game I could recommend to anyone based on the art style, soundtrack, and humor alone, but only those with a lot of patience, planning, and tolerance for randomness will stick with the game for a long time. And there is a LOT of content here for those kinds of people to enjoy. If you’re not one of those people, it’s still a lot of fun to pick up and play, but don’t be surprised if you never beat Lady Luck at her own game.

If you love building decks, strategizing five moves ahead, and combating randomness, Dicey Dungeons is the game for you. If not, you still might want to consider giving it a try for the cute, game show aesthetic and chiptune soundtrack alone. And who knows, you might be surprised how much you enjoy the deck building.

David is the kind of person to wear his heart on his sleeve. He can find positives in anything, like this is a person who loved Star Fox Zero to death. You’ll see him playing all kinds of games: AAAs, Indies, game jam games, games of all genres, and writing about them! Here. On this website. When not writing or playing games, you can find David making music, games, or enjoying a good book. David’s favorite games include NieR: Automata, Mother 3, and Gravity Rush.
Related Articles: Dicey Dungeons, Indies
Share
Tweet
Share
Submit