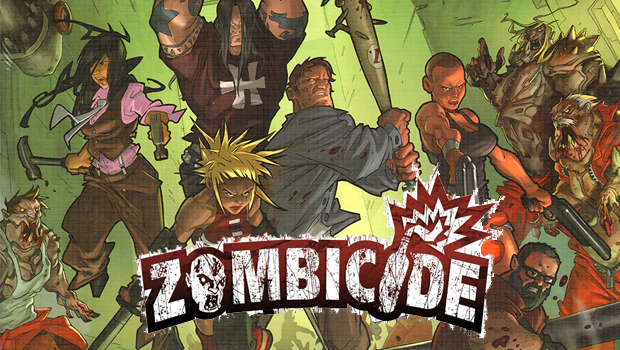 In the world of boardgames, it seems as though zombies are divisive. You either love them, or you hate them. I understand those who are not enthused by the ridiculous premise of undead corpses causing a ruckus. I, however am married to a zombie fanatic. I like the occasional zombie sprinkled in to my entertainment, but Gwyn cannot get enough. Good thing for us, we both really like Zombicide. In fact it was one of the first reviews I wrote for Gaming Trend.

In what is becoming a yearly event, CoolMiniOrNot went to Kickstarter in early 2013 to fund the first expansion and second stand alone game in the franchise, collectively called Zombicide: Season 2. This is made up of the expansion Toxic City Mall and the second stand alone game Prison Outbreak. Not surprisingly, the Kickstarter went bonkers. They collected well over double the funds of the original game and flew off the hook with add ons and stretch goals. Needless to say, as a backer, I have more than enough zombies now, and plenty (almost 50) of survivors. But is all this stuff good for the game or should you stick to the original base?

If you would like to read more about how the Zombicide system works, I highly suggest you read through my first review. I spend a while outlining the core mechanics. Due to the possible length, I am going to keep this review to just what was changed or added with the new content.

Toxic City Mall is designed to be fully compatible with both the base game and, separately, Prison Outbreak. If you could not already guess, Toxic City Mall introduces a new shopping mall theme to the game. Following the genre’s footsteps, what is more terrifying than zombies? Zombies in a shopping mall. The expansion comes with four double-sided tiles and a whole set of mall based scenarios.

Toxic City Mall introduces a new type of zombie, the toxic walker. These new obstacles do not bode well for melee based survivors. If a toxic walker is killed in a zone with a survivor, that survivor takes a wound. No longer can Wanda decimate a whole zone with just her chainsaw.

Along with the new walkers Toxic City Mall includes four new survivors and, more interestingly, rules and miniatures for Zombivor mode. In this play mode when a survivor receives their second wound instead of being taken out of the game they come back as a strong willed zombie still fighting alongside their living friends. These Zombivors come with a whole host of new skills and abilities fitting for their living dead condition. Additionally, Zombivors set a new precedence: all survivors now come with a corresponding Zombivor miniature. Yay for more miniatures!

Setting a high standard for the franchise, Toxic City Mall is just what players were waiting for. The added content fits seamlessly into the base game, both in respect to component quality and game mechanics. I remember thinking three distinct thoughts after playing the heck out of the base game: 1) we need more survivors. 2) we need more zombies. and 3) we need more locations. All three of these needs were met exceptionally well with Toxic City Mall. I have a feeling that Toxic City Mall would get more love it if was not overshadowed by Prison Outbreak.

Prison Outbreak takes an interesting, enjoyable, and high quality game, and makes it even better. Prison Outbreak is a complete standalone game, everything needed to play is included in the box. The game comes with six new survivors, nine new location tiles, a whole set of items and zombie cards and a pile of zombies bigger than the first game. As the name suggests, the new setting is in and around a prison. This leads to scenarios that are full of new mechanics like switchable doors, chain link fences, and watch towers.

Prison Outbreak also introduces a new zombie type, the Berserker. These hardened undead are immune to bullets and other ranged attacks. Only a good axe to the head will take them down. Like the Toxic walkers, these Berserkers shift the survivors strategy, but this time towards hand to hand combat. Or rather machete to rotten flesh combat.

Following in-line with Toxic City, Prison Outbreak comes with Zombivors for the new survivors introduced and a long list of skills to play with. The item deck included in Prison Outbreak is slightly modified, both to fit the prison theme and to fix some balance issues from the first game. Some of the new items include automatic shotguns , dual-wielded hatchets and, my favorite, the nailbat.

Prison Outbreak comes with a newly revised rule book to cover all of the new content as well as touch up on some issues from the first game. Critics of the Zombicide system are still going to be unhappy with the revision. Not all of the rule oddities people called out have been fixed. Along with these rules comes a whole campaign of scenarios. Some of them are awesome, and some of them feel half developed. I would have liked to see more polish with the scenarios for Prison Outbreak. There are two scenarios in particular that are unplayable without modification. I don’t mean hard, I mean there is no way to get to half of the objectives because there are no doors between the two halves of the board.

I am a huge fan of the new zombie types. The stress is ratcheted up when you see a long line of toxic walkers shuffling down the street, and the power of a pack of Berserker runners should not be underestimated. I have yet to play with regular, Toxic, and Berserkers all in the same game. I am marginally terrified. Oh! Also both games include new Abominations! Each zombie type has an associated Abomination that works a little bit different that the regular one.

The new scenarios are the aspect I was most excited about, and they deliver. The new tiles give a significant amount of visual variety, even with just the four mall tiles included in Toxic City. Your survivors will now be running down the center of a mall with zombies breaking through barricades, or trying to break into a prison for supplies only to find that the cells are all full of the undead. Guillotine Games has continued to support fan-based scenarios, which add a bunch of replayability and ensures the longevity of the game system. They have been quick to update their scenario editor with the new content.

The most pressing question is if people should buy either parts of Season 2. I would guess that fans of the franchise are already owners of the game via CoolMiniOrNot’s crazy Kickstarter. If you own the first Zombicide game, and you are fan, there is no question. I would not hesitate in recommending both Toxic City Mall and Prison Outbreak. These two boxes add more of a good thing. If you were lukewarm about the first game, the new content added does not fundamentally change that game. As such, I don’t think this will change your mind. And if you have never played Zombicide, or are looking for a good entry point, Prison Outbreak is just as good a place to start as the first game.

My biggest complaint about Season Two is the gradual power creep. In the first game there was one single way to kill an Abomination. You needed to find a bottle and gas to make a Molotov. Just with Toxic City Mall, there are two or three weapons in the item deck that are capable of taking out an Abomination. Added to this, some new survivors add a damage to their weapons. This means you can, at the blue danger level, take out an Abomination on the first turn. Granted, if you mix all of the zombie miniatures together from the base game, Toxic City Mall, and Prison Outbreak, you could have four Abominations on the board. It is just troublesome to see the trend and makes me worried about what Season 3 has in store.

Season 2 is chock full of more stuff. More survivors, more zombies, more locations, more items and more Zombicide. If you are a fan of the original game, like I am, these are only going to add to your enjoyment of the Zombicide experience. If you had to pick one of them, I would make the choice based on my budget, Toxic City Mall is great; but if I had the budget, Prison Outbreak would be my choice. For the Zombicide haters out there, Season 2 is not going to quell your hate, it is still the same game. Grab a friend, get your gear and start killing zombies.

From Trading in the Mediterranean to FPS, I love games. While I grew up in a house without consoles, PC gaming and board gaming were a large part of my formative years, and continue to influence my life. In this golden age of board gaming, I have jumped in headfirst in to anything table top. As a ludilogical student, I love thinking about how games work, their mechanics, their elegance and most importantly, enjoying how fun they are. Favorite Board Game (at the moment): Twilight Struggle Favorite PC Game (base solely on play time): Tie between WoW and DII Fell free to email me: comments, concerns, questions, feedback, rants, and/or suggestions.
Related Articles: Tabletop, Zombicide Season 2
Share
Tweet
Share
Submit