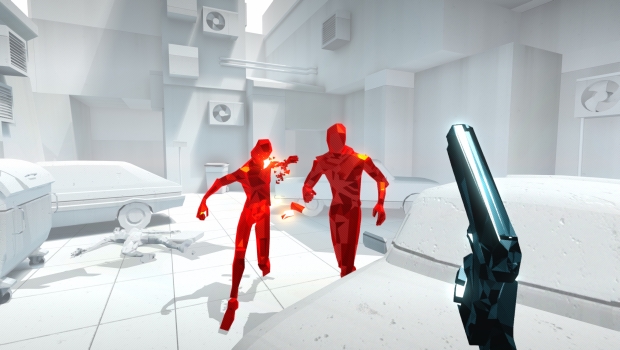 It’s exciting to see a game challenge ideas like Superhot does. Taking the constraints of an action-packed, adrenaline-pumping first-person shooter and slowing it down, pinpointing every minute and second in detail that cuts the chaff in an ecstatic pulse; that high, though, doesn’t always last.

Inside the world of Superhot, time only moves when you move. As you’re inserted into action scene after scene, each bullet means death, so each move is that much more important. Dozens of polygonal red foes bear down on you in each area, guns blazing, intent on stopping you. There’s never really a reason why — well, there is, but that would spoil some of the fun of the game’s brief story mode.

Superhot nails style and presentation in spades, with a main menu imitating an older OS and bringing up ‘80s storylines of hackers and secret code that is more dangerous than the internet sleuths realize. Each stage is simple and elegant, using smooth designs for the interior and jagged polygon maps for enemies. Bullets have streaks of red behind them, and there’s nothing like freezing in place to see the small pointed dot of a bullet right before your eyes, frozen in time.

The magic of Superhot is in that binary passage of time. Every firefight is fast and brutal, but punctuated by pauses, as you assess the room and the best course forward. It wouldn’t be unfair to call Superhot as much of a puzzle game as a shooter. You’re constantly outgunned, dodging a veritable hail of bullets with only limited space or time before you’re eventually cornered.

And so because of the odds being stacked against you, it’s easy to die in Superhot, and to die often. Most are due to your own mistakes, though several times my mouse icon would get stuck on punching someone instead of grabbing a gun or item, causing me to be unarmed for a few seconds longer than I wanted to be.

One particular level in an elevator gave me trouble, and I was stuck on it for a good twenty minutes, an above-average amount of time to spend on any Superhot scene. I was unarmed in an elevator, with three separate red foes about to shoot me at point-blank range. To survive, I had to map out every exact movement I made; some lives, I simply moved my head around and watched, seeing how each of them reacted to certain routes before dying and starting over.

Eventually, I found my path: I ducked behind one, letting the bullets hit him as I grabbed the pistol from his hand. I shot a single bullet at one foe and then immediately tossed my pistol at the other, stunning the last standing man. Grabbing the pistol from his hand, I popped him and the two men waiting for me when the elevator reached its destination.

The whole event plays out in seconds, but the careful planning and precise marksmanship of every motion and trigger pull builds into that perfect run. It culminates in a replay, which you can cut up and upload to the “Killstagram,” a website dedicated to Superhot replays. That easy replay system is the perfect addition to a game about skill and precision, and lets you highlight your most brilliant execution in fashion.

Once that luster fades, though, it’s hard to come back to Superhot. The story mode is brief, easily completable in an hour or two. While it’s compelling and engaging, the story mode is the sole outlet for gameplay, alongside a simple endless mode for those who wish to keep chopping through hordes of red enemies. The issue is that there isn’t much to do outside of those two modes. A simple time trial, leaderboards or something might pump up the offering a bit, but as is, Superhot brings a slim offering to the table.

If you’re just looking to burn an hour or two on an experience unlike anything else out there, though, Superhot is certainly something unique. It’s a blend of action and precision that has me thinking days later about how it changed the way I think about shooters. It may be short, but it can make up the slack in style, presentation and substance.

Superhot is short but full of style and substance, taking an inventive mechanic to its furthest and providing a unique shooter experience. The current offering is slim, but unlike anything else around.