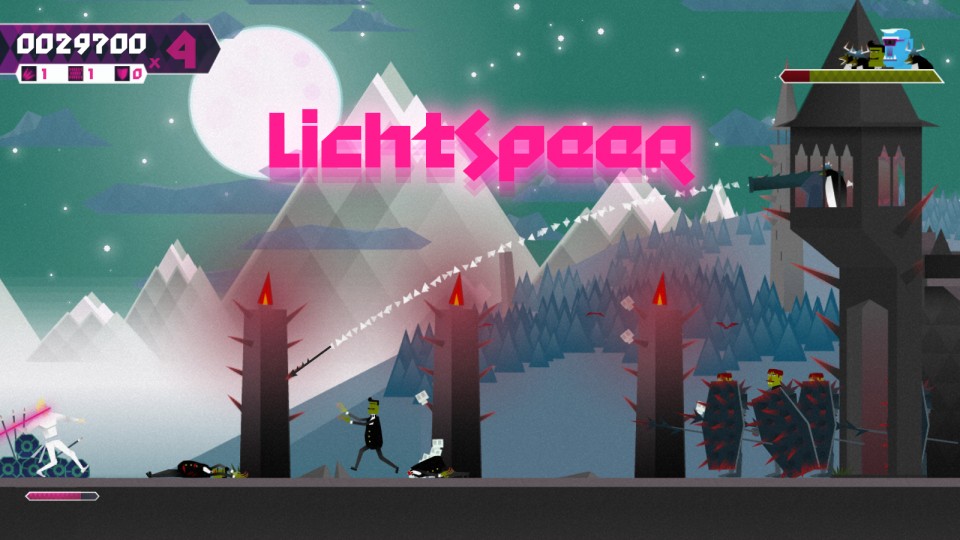 Have you ever wanted to play as a German man with a radical pink spear, and throw said spear at penguins, zombies, fish, and griffins? No? Well, you’re about to. Lichtspeer is the craziest game I’ve played in a while, and that’s a good thing. As the intro explains, you are granted an incredible weapon known as the lichtspeer, and the Gods demand that you kill things with it to ease their boredom. Lichtspeer is a game where nothing makes sense, you’re asked to just roll with the punches, and the result is hilarious.

Lichtspeer is all about throwing spears. Enemies of all sorts come barreling at the player, and the player is armed only with an infinite arsenal of throwable spears to fend off attackers. As you progress, enemies appear in greater numbers, new types of adversaries show up that are harder to kill, and various curveballs are thrown at you, like stages that are partially obscured by darkness. The longer you play, the harder it gets, and by the end, Lichtspeer can be brutally challenging. Only through persistence, precision, and a little luck, will you safely see the next stage.

The mechanics provided to you are extremely simple, as you’re only able to throw spears at your enemies to overcome each stage. Later on, you’ll unlock abilities that make the going a little easier, like a bubble shield which protects you for a short period of time, or the ability to split your spear into a cluster of six spears. The real challenge of Lichtspeer is in mastering the arch required to throw your glowing pink javelin, and adapting to the various artifices that the game throws your way. Just when you think you’ve figured out how to beat the annoying flying enemies, the gods give them armor, and now require a more precise shot to kill. The player also is not allowed to throw spears recklessly, as three consecutive missed throws results in the German Gods shouting “NEIN,” and disabling your character for a few seconds, which almost always results in your death. Lichtspeer never fails to continually challenge you a little more, every step of the way.

Lichtspeer also contains boss fights, which serve as a nice change of pace from waves of zombies, and rocket-walruses. The boss fights aren’t terribly challenging, but require you to learn unique mechanics, like dodging lasers by teleporting across the map via precise spear throws, that make for a very different experience from anything else in the game. These sequences are also especially funny, as many of the bosses have entertaining premises surrounding them, my favorite being the disco zombie who manages the rail system, and “has a lot going for him.”

Although Lichtspeer is an awesome game at its core, it does suffer from repetitive gameplay. While new challenges pop up regularly to throw a wrench in the gears, there are extended durations wherein not a whole lot changes, and the player feels like they’re just repeating the same levels over and over again, particularly at the early levels of the game. Each level contains five rounds, and sometimes these rounds feel like they overstay their welcome, and would have been better-suited as individual levels. Worse yet, each level must be played in a single sitting, through to completion, so if you get to the fifth round of a level, and decide to stop playing, you’ll need to start from scratch when you boot up Lichtspeer again.

Licthspeer has a unique look and feel that suits itself very well. Everything is bright, cartoony, and decidedly over-the-top. It’s also pretty gory; if you fail a level, zombies bite into your flesh, giants, stomp your face off, and rockets blast you into tiny pieces. That said, the gory and strange look of Lichtspeer fit in perfectly with the almost sarcastic tone of the game. The sound, on the other hand, is not as stellar. Lichtspeer only seems to have a few tracks, which is disappointing considering how long some of the levels can be. The douchey-sounding electronic music fits in well with the style of Lichtspeer, but when you have to listen to the same track multiple levels in a row, the joke falls flat, and you start feeling more annoyed than amused.

Lichtspeer is nonsensical, bloody, and a joy to behold. It suffers from repetition, and stages that drag on a little too long, but is a worthy experience for those possessing the willpower to tackle this challenging title.

You know that jerk online that relentlessly trash talks you after every kill? That guy was probably Travis "Tie Guy" Northup. Competitive, snarky, and constantly wearing a tie, Travis has been writing his opinions about electronic media since he was a teenager, and is pretty much the only person to hold his opinions in high regard.
Related Articles: Lichtspeer
Share
Tweet
Share
Submit