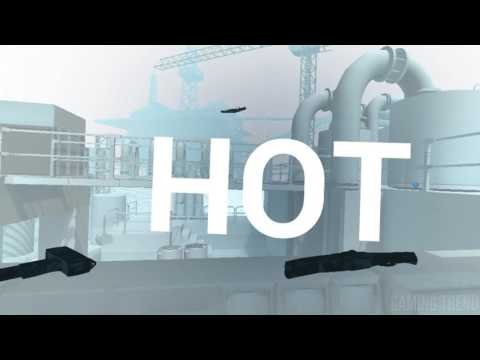 I’ve likely played several thousand games in my life, but there hasn’t been a single one that made me feel as much of a hands-on badass as Superhot VR. In terms of story, I’m not sure I know what the hell is going on, but I know that it’s awesome.

Superhot VR runs on the same mechanic as its flat screened counterpart: the only time enemies move is when you move. In the VR space, this means remaining perfectly still, keeping your feet and hands motionless. As you step in any direction or reach for things, there is a direct correlation between the speed at which you perform those actions and the speed your enemies take their actions. How you react is where the magic happens.

The game begins with you in a white room, a black gun hovering mid-air in front of you, beckoning you to action. Gripping the weapon by pressing the side buttons on the HTC Vive wand takes it in hand, ready to unleash damage. The world unfolds as a white stylized universe populated by very angry red glass polygonal soldiers and black objects that serve as weapons. As the game progresses, what constitutes a weapon gets more loosely interpreted. I’ve killed a man with a shot glass, smashed others in the face with a spent shotgun, used a billiard ball to bludgeon a third, and punched a fourth with my closed fist. Catching the knife he was carrying mid-air, I lobbed the seized weapon directly into the chest of an incoming runner. All of this happened in a matter of seconds, and it’s exhilarating.

When you move, they move.

One of the most beautiful parts of VR as a platform is that it translates to natural motion. There’s not often a need for instruction, and nowhere is that more true than here. Unlike the flat screen version of Superhot, you don’t move through the environment, instead, staying in a roughly 4’ by 4’ play space. From there, if something is red, kill it with something black which will be a weapon. Grabbing a wine bottle, you can overhand throw it, side throw it, or underhand lob it at your foes. It’s simple on paper, but figuring out how to do it before you get gunned down is a whole different story.  Allow me to demonstrate…

In the beginning, most foes come after you empty-handed and with a lot of distance to close before they become dangerous. As the game progresses, enemies will run to pick up weapons, or even start with them in hand. By the game’s midpoint, they not only start with knives, axes, pistols, shotguns, or submachine guns, they can also be at point blank range and mid-attack the second you spawn. While that sounds rough, remember that nobody moves until you do. During one sequence I had a knife wielding foe on my right, another a step away to my left, and a crazy guy with an axe rounding the corner. I used the nearby meat cleaver to dispatch the guy on my right, catching his knife as it flailed away from his shattering crystal body, ducked under the incoming attack from the left and plunged both blades into the chest of the attacker, and then hurled both knives into the face of the incoming axe wielder. The familiar pyramid that signals the end of that sequence appears, reading “Grab” on the side. Doing so starts the next setpiece.

Your weapons are heavily varied.

Superhot VR, like its flat-screened brother, is a “fail until you don’t” gameplay experience. Don’t let this dissuade you as there is an innumerable amount of ways you can get it right, if your timing is solid and your aim is true. As enemies fire their guns at you, red contrails run back to their origins, their bullets careening towards you every time you move. Yes, you can pluck those bullets out of the air, but it’s more satisfying to grab a nearby hammer and wing it at the sender’s head. The enemy dispatched, you can intercept his pistol, duck in the real world, and clip the wings of a different incoming foe. It will make you feel badass, and it’s a great workout to boot.

I was worried about movement in Superhot VR as I wasn’t sure how I’d be able to handle the lack of static objects. It turns out that this is a nausea-free experience, with the exception of just one moment that you end up taking a short walk off the edge of a building. It’s a momentary wobble, and the rest of the game is a smooth ride.

Superhot VR isn’t flawless — I’ve had one level refuse to end until I restarted the game, and there’s plenty of “My people need me!” level of physics bugs causing enemies to fly into the sky like they were shot out of a cannon.

In the end, Superhot VR’s only real flaw is its runtime. The game can be completed in about 2.5 hours for your first run. The positive thing is that every sequence can be handled in a number of ways. If you want to go melee only, you’ll struggle to dodge all the bullets, but it’s more than possible. If you want to use all of the shot glasses as projectiles instead of bullets, they are lying next to the firearms. Tackling each in different ways adds to the replayability, but this game also makes a great introduction to VR.

Superhot VR makes you feel like a badass. While it does have a short runtime, every second of it is challenging and, when you succeed, rewarding. It’s easily one of the best and unique experiences in VR.

Ron Burke is the Editor in Chief for Gaming Trend. Currently living in Fort Worth, Texas, Ron is an old-school gamer who enjoys CRPGs, action/adventure, platformers, music games, and has recently gotten into tabletop gaming. Ron is also a fourth degree black belt, with a Master's rank in Matsumura Seito Shōrin-ryū, Moo Duk Kwan Tang Soo Do, Universal Tang Soo Do Alliance, and International Tang Soo Do Federation. He also holds ranks in several other styles in his search to be a well-rounded fighter. Ron has been married to Gaming Trend Editor, Laura Burke, for 21 years. They have three dogs - Pazuzu (Irish Terrier), Atë, and Calliope (both Australian Kelpie/Pit Bull mixes).
Related Articles: Superhot VR
Share
Tweet
Share
Submit