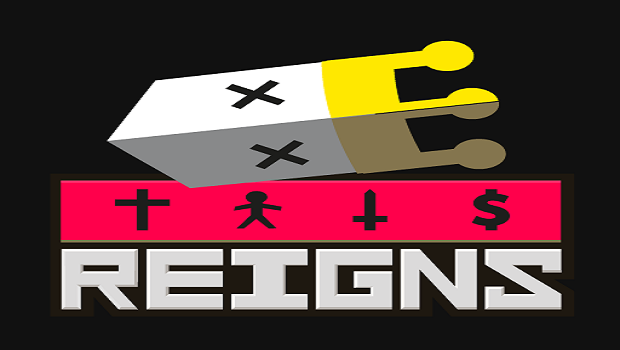 Unlike some people my age, I haven’t tried online dating yet, but for some reason Tinder mystifies me. The app’s ephemeral approach to social interaction is neat; it’s exciting that in this day and age we can get dates by mutually swiping right in an app. While it’s alright for dating, I often wonder how the concept would work in other situations. Enter Nerial’s Reigns, an interactive strategy card game that has you ruling a kingdom, through little more than a flick of your finger. It’s a title that’s a loving homage to Tinder, but will you find a match with this game, or swipe left and move on?

Reigns puts you in the beginning of the seventh century as you control a fledgling medieval empire. As you interact with people, you’re given two choices, and you can swipe left or right to decide. Once you’ve decided your action, the turn ends and a year passes. Armed with the advice of fellow counsel, you are tasked with balancing four elements in order to continue your reign. While not officially named, the symbols on the top of the game screen represent religion, morale, military, and money. The second you run out of or maximize any of the four elements, you are met with an untimely death. Throughout your reign, you are given three objectives to complete, from heading to a secret dungeon, to meeting a new character, to dating a pigeon (complete with Hatoful Boyfriend references, an inside joke from publisher Devolver Digital). Completing these objectives will grant you an honorary title that stays with you until your impending death.

One of the many ways you can meet your demise!

In addition to social interactions, you may participate in duels between certain NPCs. Using the same swipe system, you’ll have to decide whether to attack, defend, or use a special move in order to win. While these battles might be daunting and random, they’re one of the best parts of the game. It was pretty interesting to assess the situation and determine whether an NPC was parrying or readying an attack.

The game is difficult at first, mainly because of the plethora of ways to perish; micromanagement is necessary in this game, as almost every decision will affect an element. For example, allowing the townspeople to build a barn will cost an exorbitant amount of money, but will increase morale and create a way to save the people from famine. Denying this option will decrease morale, but will give you a way to save your finances. It helps that each choice will show you what will change (how it will change is not revealed however), which gives you time to think about your strategy.

Because Reigns focuses on interaction, there are more than 700 decision cards from which to choose, and 37 NPCs to meet. Each one has a quirky personality and it’s worth it to go and explore all your options. From the corrupt priest to the eccentric artist, each NPC is decorated with a pixelated portrait card. As you continue speaking with them, you learn strategies to balance your elements and keep the kingdom in harmony. One minor quibble from the NPCs came in the form of their voiceovers. Each character talks in a different tone which can only be described as Simlish mixed with guttural noises. It’s merely annoying at first, but it quickly becomes grating after an hour because every interaction uses it constantly. Thankfully, there’s an option to turn it off, but it’s still rather irritating as the default.

In order to mix up gameplay, there are events that can affect your four critical elements constantly, and this is where the game falls flat. For example, there are points where you can start a crusade to raise unlimited money but also cause morale to fall constantly; this results in an increase in money and a decrease in morale every second. This seems like a good thing, but since the game ends if you run out of or maximize an element, this can be problematic if you want to take your time making a choice. In a game in which every choice bears a consequence, it makes these segments feel rushed. However, these moments only show up occasionally, so they don’t really mess up the flow too much.

There are some tongue-in-cheek cards you can encounter.

It’s the usual slow pace and text heavy approach of this game that makes Reigns perfect for short bursts or on the go play. Due to the game’s sole control method being a Tinder copycat, it was fun using the touchscreen or tablet mode on my laptop to swipe. The game is also focused on high scores, with a local leaderboard comprised of the top four reign durations, which makes surviving the monarchy more of a points-based affair than a narrative one. While this makes the game feel like an arcade title, it also means that most decisions and items don’t carry over between reigns due to balance. After all, having a rare gamebreaker item that details exactly how many points you’ll gain or lose from a decision would be unfair to have early on in a run.

While each death counts as a game over, the game doesn’t officially end until the turn of the second millennium, where a secret long term goal must be completed: fail, and you restart. This is the main drawback with Reigns. After the first full playthrough of dying repeatedly, you end up resetting all your progress, including previous high scores. To have all my progress, other than death “achievements,” characters met, and cards discovered, wiped away killed a lot of interest for me during the second playthrough. It’s easy to get through the whole timeline in around four hours, and there is little incentive to keep playing after you discover most of the narrative cards. However, the experience is comprehensive enough for its price point ($2.99, $5.99 with bonus content), and is a welcome oddity in the self-proclaimed “Tinder for monarchs” subgenre of adventure games.

While there isn’t much to do after your first playthrough, Reigns is a short and sweet micromanagement adventure game filled with quirky characters and amusing conversations.

Elisha Deogracias is an aspiring accountant by day, freelance writer by night. Before writing for Gaming Trend, he had a small gig on the now defunct Examiner. When not being a third wheel with his best friends on dates or yearning for some closure on Pushing Daisies, he's busy catching up on shonen manga and wacky rhythm games. Mains R.O.B. in Smash. Still doesn't know if he's a kid or a squid.
Related Articles: Reigns
Share
Tweet
Share
Submit