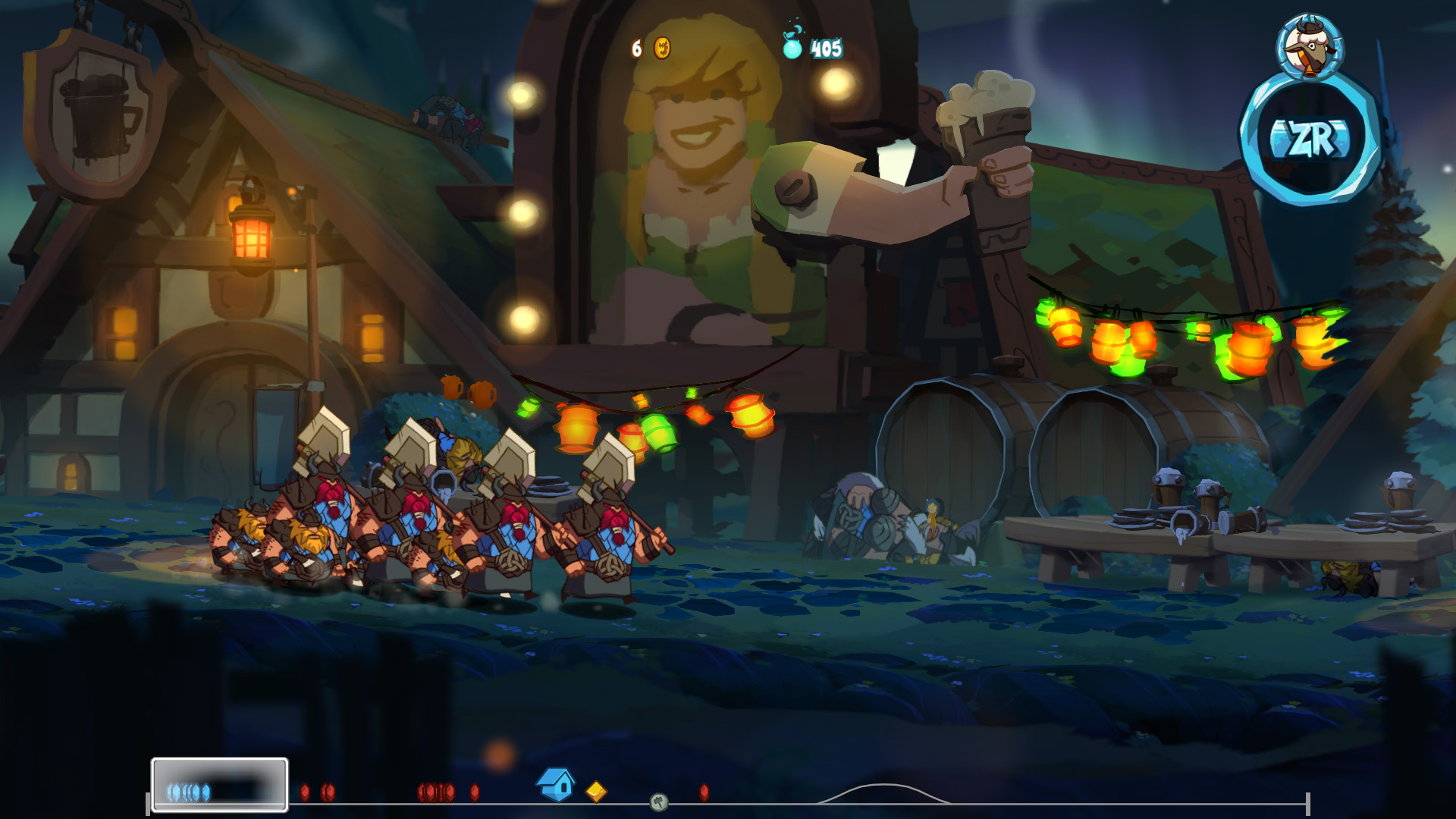 The unquenchable and ravenously adorable Vikings are back and pushing forward (well, more like to the right) to adventure, glory and the culminating feast. This time it’s for a mysterious genie’s lamp and the promise of succulent kebabs.

Ronimo Games’ Swords & Soldiers series has always had a charming and vibrantly hand-drawn visual style, something close to what you might expect to see on Cartoon Network or Saturday morning cartoons. The art style is fantastic, but it’s unfortunate that the controls put a damper on the experience. If you’re playing with the traditional control set, you must use two radial wheels mapped to the ZL and ZR buttons. It’s clunky and slow compared to the fast and fluid touch control mode that they offer. The only problem is that when using the touch controls, you’re stuck looking at the inferior Wii U gamepad screen. I tried bouncing back and forth, but eventually ended up shutting off my TV and just playing on the gamepad and missed out on a lot the wonderful art had to offer.

There’s not much fun to be had with the story and gameplay in the series’ second campaign either. Swords & Soldiers II manages to take a simple narrative–bad guy steals something to dominate the world and good guy tries to stop him–and twists and confuses it by trying to incorporate each of their different playable factions into the story. Who has the genie’s lamp now? Was it the demons? No. The Persians? Who is this new guy?! Aaaah! I’m not saying that fans flock to the Swords & Soldiers games for their attractive tales of tragedy and triumph, but this was just plain forgettable. It could have been good too, because the writing is actually pretty witty and had me snickering a few times. The banter between chief protagonist, Chief Redbeard, and his arch rival Blackbeard is funny as they both try to out-insult the other, while the not-so-evil demon faction is littered with characters named Matt and Charles. It’s charming.

But cute and charming only gets you so far in the gaming world. The gameplay of Swords & Soldiers II is lackluster. If you’ve never played a Swords & Soldiers game before, it’s really very simple, you send combat units out from a base to battle enemies on the other side. Your units walk right. Their units walk left. And when they meet in the middle…they fight. It’s the various unit types and powers that make the battles engaging. If the enemy is sending out  Persian magicians on flying carpets that pelt ground units from above, as the Vikings, you’ll need to counter with troops of the axe-throwing variety to knock them out of the sky.

There are three playable factions: the Vikings, the Persians, and the Demons, each with their own set of units, towers, powers, and spells. The Vikings have only ground units, defensive towers, and a focus on healing. The Persian units are weaker, but have a lot of illusionary spells to help them during combat, and an offensive tower that launches mini sword-wielding genies into the fray. The Demons are similar to the Vikings with a unit composition balancing melee and range, but their necromancer towers send out legions of skeletons to fight, while their powers focus more on frightening enemies away.

During the campaign–do to the incoherent story–many of the different units and spells across all factions can be used in concert. If you want to use the Persian shield spell on a Demon, you can do that. If you want to backup your Viking soldiers with Demon skeleton towers, you can do that as well. There are open battles on the world map which allow you to mix and match all of the items before you go into a fight, but these are little more than shallow distractions from the story missions. Despite the many combinations, the base gameplay mechanic rarely changes and becomes dull and repetitive. There are a select few moments when you can unleash a super power, like the Demon named Matt, who rains down meteors on your foes., but these rare super abilities are accompanied by a shallow mini game that adds nothing to the experience.

I spent a grand total of about 5 to 6 hours with Swords & Soldiers II. The first three hours were serviceable, maybe even a little fun, but at about the halfway point I just wanted the game to be over. The mechanics had not changed, and it was apparent the story wasn’t going to keep me intrigued. It was boring.

All of the sudden, my massive Viking land-boat crashed headlong into a rocky cliff face of difficulty. And not the good kind of “wow, this is challenging and rewarding difficulty,” it was more like the “this is inexplicably and irrationally hard, it doesn’t make sense, and I’m getting frustrated difficulty.” It was right when the second portion of the world map opened that the level spiked, so that the game went from mindlessly easy, to me banging my head against the wall. There was no ramp. No warning. Just…now we’re going to make you suffer. My units couldn’t stay alive, I constantly ran out of resources, I failed missions over and over again. I kept at it because I thought to myself that if I’m patient something will click and it will all make sense, but it never did. For a moment I thought about taking a giant two-handed axe to my Wii U, but instead I caved and played the rest of the campaign on easy mode. This cuts all unit costs and spell cooldowns in half, so that I could basically spam everything. It was pointless, and soured the end to what was already a mediocre experience.

I was a fan of the first Swords & Soldiers’ fiery and rambunctious Viking hordes and their quest for grandeur and grilled meats, and I had high hopes for the sequel, but Swords & Soldier II wound up just being a dusty old lamp with no magic to speak of.

On December 5, 1986, Josh was born into this world pink-faced and squalling. His only thoughts were, "WHAT IS GOING ON? WHO ARE ALL OF THESE PEOPLE? AND WHY THE HELL AM I NAKED?" 19 years later he bought an Xbox 360 and now plays and writes about video games. Life is funny that way.
Related Articles: Swords & Soldiers II
Share
Tweet
Share
Submit