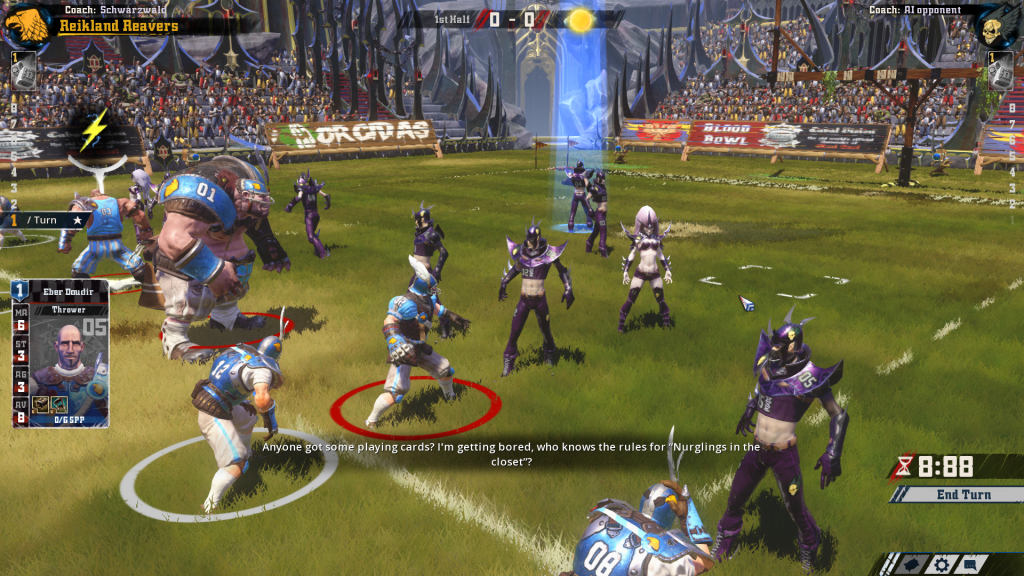 If you asked me why I’m not a big Madden player, I’d have a ready answer for you: a distinct lack of bloodthirsty orcs. Elves too. Also, the entire game takes place at a very fast pace, and I’d really rather if it was turn-based and more tactical. Violence should be an essential part of the game – complete with gruesome, bone-breaking deaths – and to cap it all off, I’d like the ability to buy ‘do-overs’ in the middle of the game. So I suppose if you printed out a Venn diagram of the sort of people you expect to be big Madden fans, I’d be the doodle in the corner of the page hurling a goblin holding a lit crate of dynamite at the chart. While EA Sports is taking its sweet time in implementing any of the above suggestions to its franchise, Cyanide Studios and Games Workshop are giving me exactly the sort of sports simulation I want in Blood Bowl II. And the best part? It manages to give me everything I asked for above and more, while actually being a fun if sometimes unpolished game experience.

Humans versus the dark elves. The elves are pretty fragile, to the surprise of no one.

Blood Bowl II, like its predecessor, is based on what I’m told is a relatively popular tabletop game. It’s related to the gruesome Warhammer worlds – the titles which are Games Workshop’s bread and butter – and I will admit right up front that I have absolutely zero experience with that version of the game. Or, in fact, the tabletop version of any game. But I didn’t need to roll a single die to be enticed by the basic premise of Blood Bowl II, which amounts to a football league in a fantasy universe where life is cheap and murder is convenient. In a brass-tacks genre sense, we’re dealing with a turn-based tactical game rather than a true ‘sports’ game – twitch reflexes are of no use here, while the ability to keenly balance player statistics and capabilities is far more central. It’s not quite chess but it is still a thinker’s game, and I can only assume that in that respect the title stays true to its tabletop origin.

Here’s a taste of the fundamental gameplay on offer here: you and your opponent arrange your respective players on the field. A kickoff starts the game, with the receiving team having the first turn. There are sixteen turns total in a Blood Bowl II game, with each player’s set of ‘moves’ counting for half a turn each. Players can move, one by one, each member of their team around on the field – complete with grid-based movement – and choose to tackle opposing players, pick up the ball, and so on. While this may seem a bit unfair, with one player able to tackle the opposing player’s every team member – there’s an important twist. Just about every action aside from basic movement has a chance at failure, however low. Failing a given move not only means that their attempt was wasted, but that their entire turn is over – even if they still have players who have yet to move. A single bad throw of the dice can lead to a major upset, which means a whole lot of emphasis is placed on tactically choosing what opportunities to take and let pass.

An aerial view, for when you want to locate every player on the field at a glance.

There’s a whole lot more to Blood Bowl II than the basic failure risk, of course – but the game actually does a good job of easing a new player into the rules via its campaign mode. Said campaign is wrapped up in a story about league intrigue, as communicated by two ESPN-like figures – one big dumb ogre and his sharper, if shadier vampire companion – and features some good voice talent and decent, if sometimes hard to follow, writing. Honestly, I’m around halfway through the campaign and I’ve lost track of the whole story other than ‘Apparently the team I’m managing is supposed to be sabotaged’ but really, it doesn’t matter. Blood Bowl II’s campaign largely exists to expose the player to the various rules of the match, the particularities of the different teams on offer, and to provide entertainment with what would otherwise involve some fairly dull rules exposition. To that end, Cyanide deserves praise for making rules-learning a pleasant experience.

In fact, the entire game is rather well polished, both visually and sound-wise. We’re not talking cutting edge graphics – don’t expect exact lip syncing from the commentators as they talk – but everything is lively, detailed and distinct, which is all I expected and more. Each of the eight included teams in the game are full of life, standing out strongly in their design, right down to having their own racial arenas. These teams don’t just differ visually either – the fleet-footed, fragile skaven play radically different from the sturdy, conflict-ready dwarves. Learning the ups and downs of each of the available teams (and the just-added DLC Lizardman and Wood Elf teams) is part of the fun, and adds up to a lot of potential for variety and customization. Even after the campaign, players can look forward to playing in league matches where they can pit their hand-crafted teams against their opponents’ in a bit to become league champion. Naturally there’s an included AI-versus mode, but I can’t picture anyone picking up Blood Bowl II intending to just play through the campaign and face off against the AI. There’s an unstated assumption that you’ll be seeking out and taking part in multiplayer leagues if you truly want to get your money’s worth out of this title.

Take away the giant crystal ball and this looks like a standard football commentator duo.

While the game itself is a solid – if ultimately multiplayer-reliant – experience, the interface has some hits and misses. The camera view on the field can be a bit of a hassle, feeling a bit clunky and non-intuitive. Now and then, the interface can get in the way of the on-field action, blocking the ability to interact with the dice that pop over the players heads when an action is initiated. While these are fairly minor concerns, a larger one comes in the form of the game’s campaign mode. While this mode does a great initial job of providing a tutorial for the game’s fundamentals, it ends up becoming extremely difficult to progress due to the ‘obligatory’ challenges. Just plain being able to defeat the opposing team can be a chore; being tasked with defeating the enemy team, and also pulling off very specific tricks like ‘Force two witch elves off-sides’ can feel nigh impossible. I get the impression that these challenges were included to educate the player about specific aspects of gameplay, but in practice it just makes the whole affair pretty frustrating.

Those complaints aside, Blood Bowl II is a fun title that offers up a unique turn-based tactical experience. If you’ve got some friends to play with or a willingness to join up with larger leagues online, and if you enjoy fairly deep tabletop-inspired conflict, then be sure to give this one a look.

Blood Bowl II is a unique tactical turn-based game with an amusing setting and a lot of personality. The underlying game is solid and offers a lot of possibility for multiplayer, but the interface and the camera could use a little bit of polishing. Otherwise the biggest problem will be finding players willing to stick around for the league mode.

Victor Grunn has been a gamer since the days of single-button joysticks and the Atari 800XL. When not lamenting the loss of the Ultima series or setting people on fire in Team Fortress 2, he's an aspiring indie game developer and freelance writer.
Related Articles: Blood Bowl II
Share
Tweet
Share
Submit