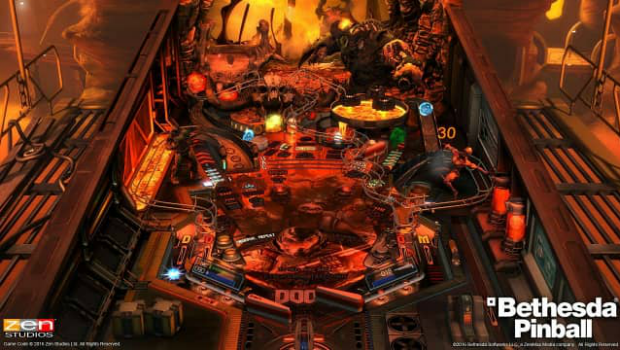 I got to go back to the ol’ Zen Pinball 2 well once again, this time with a trip dip of Bethesda Softworks based tables from their three latest major releases. Pinball is always fun, but it’s usually the same experience with variants throughout each table. For this release, we are treated to something different, with each table providing a different level of adventuring and even some character development.

Like all Zen Pinball table releases, Bethesda Pinball treats us to well-designed tables, with each having a different level of difficulty, size, and overall layout. The tables in the Bethesda release are Skyrim, Fallout, and Doom themed. The first two have a character creation system as well as quests to be fulfilled, while the Doom table is much more traditional, while implementing extra levels with different types of challenges.

The Skyrim table is by far the most complicated of the three, and provides more beyond a simple play-and-go Pinball experience. When you first play, you’ll choose a character and start them at level 1. My initial thought was that this stat would reset after each playthrough, but this  is not the case. Each time you play the Skyrim table, you return to the same character, who gains levels, gold, and loot which you can actually use and equip. You can also create a new character if you so choose.

You gain quests through new factions you can join, and by hitting certain targets. Quests and other events can trigger battles with bears, bandits, wolves, and other enemies from the Skyrim universe. There is no real progression among quests, and you’ll end up doing the same missions over and over and over again. However, the game allows for a character progression that adds an extra layer of replayability to this particular table.

The Fallout table, in contrast, is also based around character creation, but unlike the Skyrim one, resets character level each time you start the table anew. You can randomize or build a character yourself with a hands-on approach compared to the Skyrim character, which you simply choose. You are also assigned a “follower” from the Fallout 4 universe, which appears as a image below your character’s feet and provides a buff of various kinds.

This table is the smallest, and the most difficult of the three by a pretty large margin. I also find it to be the best looking, and I especially love how the Fallout design is implemented with the numbers and figures. Mechanics is similar to the Skyrim table, where you can join factions, complete  quests, and collect bonus jackpots by completing said quests.

Lastly, we have the Doom table, and while it lacks the character creation of the prior tables, I am even more impressed with the sort of “mirror” they attempt to hold up here. Instead of being a RPG/Pinball mix, this plays more like an FPS, with missions sending you to different sub-stages where you complete alternative challenges. You are locked in battle throughout your playthrough with different aliens, and a health and ammo counter is shown at the bottom near the flippers.

The game allows for new weapons to be found and used as you pinball away, and more importantly, the game has several alternative controls in the table itself, from a disc you spin to keep the ball in place, to a rotating group of gear like flippers that you use to rack up points in a special chamber. I really like how this table expands on these mechanics;  giving me flippers, a spinning disc, the gears thing, and the other special use tools captures the feel of switching between weapons in Doom proper.

Overall, I find this to be one of the premier table packs available for Zen Pinball 2. Each table looks great and captures the feel of each game represented with impressive accuracy. Each is expertly designed to be both familiar and unique, and while sometimes I do feel it all can be a bit much for a simple pinball game, I appreciate the option of deeper play being available. Each table blends the sounds of the game being represented with standard pinball sounds, and there are several interesting uses of the old school info panel.

My major complaint seems to be one that carries from table to table in Zen Pinball 2, and is present again here. It seems that when a ball is locked in place, or if a special mode is entered where the ball is held, it almost always will launch directly into the dead space on either side of the table, immediately ending the mode. I am not sure if this is programming or design of the tables themselves, but it is frustrating to be ripped out of a earned special mode without even being given a shot to keep it going.

Bethesda Pinball is an impressive collection of pinball experiences based on Bethesda’s A-List hits Skyrim, Fallout, and Doom. Surprisingly complex and dynamic, these tables do a great job of capturing the feel of the game they represent while staying true to the classic pinball dynamic. Visually pleasing, challenging, and highly replayable, these tables are a perfect addition to your Zen Pinball 2 collection.

Patrick Rost has been with Gaming Trend since 2013. At first focused on sports coverage, Patrick has gone on to cover a wide range of games and other products for the website. Outside of Gaming Trend, Patrick writes and records music, grinds perpetually in Elder Scrolls Online (PS4), and lives day to day with his two dogs, Bob and Stella.
Related Articles: Bethesda Pinball
Share
Tweet
Share
Submit