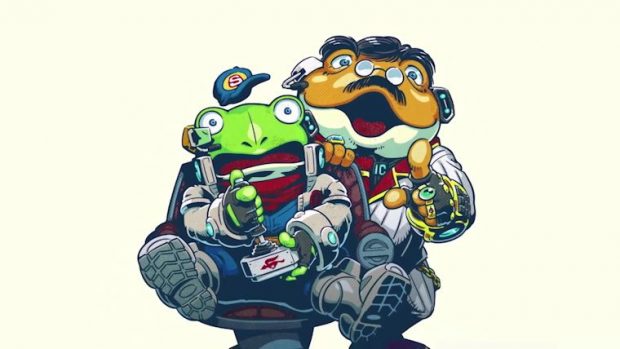 Star Fox Guard presents a concept that sounds great on paper, but seemingly loses something along the way. Capitalizing on the touch input and two-screen experience of Wii U sounds like a natural fit for the tower defense genre, but Star Fox Guard unfortunately falls victim to its often-overwhelming approach. Star Fox Guard is an enjoyable spin-off that offers moments of frantic entertainment, but a frequent inability to mentally keep track during its most intense moments gets in the way of its mechanically sound gameplay.

Star Fox Guard is as distant of a spin-off as games can go, lacking any sort of space combat and barely featuring the Star Fox team at all. Instead, players take control of Grippy Toad, uncle to Star Fox pilot Slippy, in his efforts to expand his mining business of Corneria Precious Metals Ltd. When Grippy’s colonies continue to come under attack by hostile robots, he enlists the help of his nephew to maintain security so that his business can continue to grow. It’s a silly story, and admittedly one that leaves you curious as to how this ended up linked to Star Fox in the first place.

The actual gameplay features fairly straightforward tower defense scenarios. Each level presents players with a base that must be protected from incoming armies of robots who are all pushing forward to the center, and it falls on you to keep them out as long as possible. All enemies fall into one of two classes, and each variation is equally as deceptive and sly as the next. Combat class units are the heavily armored machines that make a beeline for the center of the base and mean quick defeat should they sneak by you. Meanwhile, chaos units excel at creating disruptions, such as the ability to temporarily disable your laser-mounted defense cameras and obstruct your maneuverability. The variety of enemies is one of Star Fox Guard’s more impressive features, and fighting to stop their assault usually boils down to a satisfyingly hectic juggle of prioritization.

Keeping track of everything isn’t easy.

Each defense scenario is carried out through a combination of both your TV screen and the GamePad, and this is where Wii U’s unique interface opens up new possibilities. The GamePad offers a top-down view of your base at all times, and as many as 12 cameras can be placed on the map before each defense. Your television screen then shows a border made up of each of the camera feeds so that you can see every crucial point on the map at all times. The center of the TV screen shows the currently armed camera, and switching between active cameras is as simple as tapping on the GamePad.

The disjointed nature between the two displays is Guard’s biggest setback, though. Where the Wii U should seemingly make switching between cameras a seamless task, the constant need to be monitoring so much at once often feels like stimulus overload. Being able to find a breaching enemy on one of my TV’s camera feeds is simple, but selecting the matching camera on the GamePad takes a moment of searching that you don’t always have to spare. The camera display on the TV and their locations on the GamePad map are usually within the same region on each screen, but taking a second to get your bearings every time a swap is needed just isn’t affordable by a demanding game such as this. It gets slightly easier with practice, but even after hours of playing, I still found myself with a disconnect when trying to mentally link the two screens together as the action heated up.

As challenging as the campaign can be, though, Star Fox Guard’s online multiplayer is what really shines. While still using the same core game mechanics, Guard offers an asynchronous multiplayer mode where one player attacks and another defends. Each level allows players to create their own squad of robots that can be given a script and set to invade different entry points along the timeline of the match. Other players can then go online to challenge your squad as it tries to destroy their base. The offensive portion creates a fun scenario where clever players have the potential for truly devious assaults, while playing defense comes with the thrill of ranking up against other players. Both sides of the equation offer an addictive reason to keep playing and I look forward to seeing what players create in the future given the right set of units.

Boss levels are fun and refreshing.

Outside of the main campaign and multiplayer modes, Star Fox Guard does offer a fair amount of extra content. Every match played awards you with experience points, and unlockables are earned every time the player levels up. These range from bonus levels involving unique scenarios, such as enemies that parachute down into the base, to new camera types with bonus perks such as lock-on targeting. There are also boss fight levels that, without spoiling too much, offer some of the most fun action in the entire game. All of these bonuses are still prone to the same frustrations as the main campaign levels, but Star Fox Guard does an excellent job at mixing things up and offering variety.

Star Fox Guard is a well-crafted game that ultimately stumbles over its own special approach to tower defense. The mechanics are simple, the enemy variety keeps things fresh and an addictive multiplayer scenario offers great competitive strategy. However, a disorienting link between the game’s two screens hinders the game at its most crucial moments. Star Fox Guard has its high points, but comes with just as many frustrating lows that remove you from the experience.

Star Fox Guard’s mechanically sound gameplay is frantic and fun, but its two-screen display adds to its chaos and brings down the experience.

Gaming Trend's resident amiibo collector, Matt's a lifelong gamer with a soft spot for Nintendo. As a new father, Matt often struggles to stay as involved as he has been in years past but can always be counted on to come back for some engaging geeky conversations. A resident of Philadelphia, he is currently working on building up his Man Cave with all things Marvel, Star Wars, and Video Games. As an old-school gamer, Matt firmly stands by his belief that gameplay will always be more appealing than story.
Related Articles: Star Fox Guard
Share
Tweet
Share
Submit