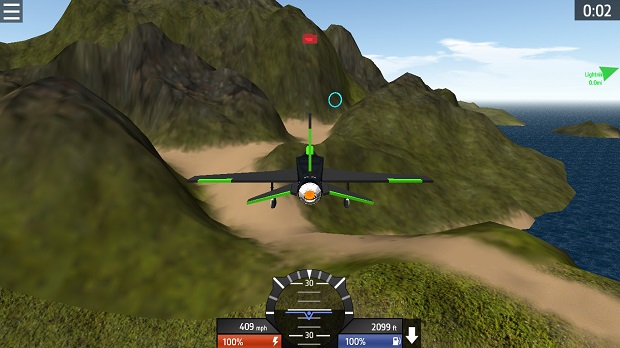 As someone who studied the humanities in college, let me just say that I know virtually nothing about engineering or building flyable planes. Even the one physics class I took in high school turned into gibberish in my brain. However, for the most part I can say that SimplePlanes is a decent game for beginners and experts alike.

The studio’s first game, SimpleRockets, is a 2D space simulation game. They decided to take things up a notch with their next simulation game, moving into the realm of 3D graphics and community integration. Some things worked, while others were less than satisfactory.

There are several tabs that greet you when you load SimplePlanes. The first tab contains lengthy tutorials the creators wrote up about different aspects of making and flying planes. Though they delve into the science of it all, everything has been written in relatively simple terms with minimal jargon. There are also playable tutorials for taking off and landing before you’re asked to complete your first solo flight. One notable omission is a training mode for turning your plane. Between practice and revisiting the written explanation, I have yet to master it.

I wonder if it’s just as showy on the inside.

Like I mentioned, I don’t know how to build a plane from scratch. Even when I tried to modify the few premade planes in the game, they fell apart before ever getting off the ground. Luckily, besides just the preloaded models, there are tons of planes available for download. The community is impressively active, churning out over 100,000 custom aircraft and uploading them to the SimplePlanes website. There are replicas of planes from wars, fandom vehicles, and even Donald Trump’s plane, a rough approximation of a Boeing 757-200.

One thing I was dismayed to learn is that downloaded planes aren’t automatically saved to your computer. You have to manually save them yourself through the build mode. I love having such a variety of vehicles right at my fingertips, but I wish they’d simplified the steps of adding them to your library a bit.

All signs seem to indicate that, for those with the time and knowledge, the crafting system is quite good. There are lots of parts at your disposal, and you can resize them however you like. You can also give your planes custom paint jobs and achieve all kinds of appearances, from WWII fighters to podracers from Star Wars. The menus are slightly confusing at first, but with time you figure out how to navigate them.

The offerings from the other main menu tabs include a number of race tracks, combat training, challenges, and a couple of sandbox modes against AI opponents. You can spend your time in SimplePlanes in whatever way you desire. Painstakingly recreate famous airplanes, explore the planes everyone else has shared, test your skills, or embark on a flight with no destination in particular.

As previously stated, the build mode is just fine, but what about the flight simulation? In one capacity or another, it takes up a large chunk of this game. Putting aside my inexperience, the simulation is okay, but not great.

Figuring out how to properly turn helps a little, but often the camera movement can be pretty jerky regardless. It takes a lot of precision to keep it smooth in some modes. Otherwise the result is a flight that can be dizzying and slightly nauseating. For some reason, when you crash in some challenges, the game doesn’t automatically prompt you to restart or exit the level. You get to watch your plane’s pieces tumble endlessly until you open the menu yourself. Some scattered maps will actually open the menu for you. There’s no real explanation for this inconsistency that I can see.

I tried to get a screenshot of a plane that resembles Charizard in flight, but all I could manage to capture was it crashing into a mountain due to my poor flying skills.

On top of that, the screenshot control on Steam can be finicky during flight. It worked just fine for the tutorial screens and plane construction, but when it came to piloting downloaded vehicles, pressing it multiple times in a row wasn’t guaranteed to work. Some of the Steam achievements may also be broken. Almost immediately I earned an achievement for amassing over 10 hours of design time, though my playtime clocked in nowhere close to that.

There isn’t much else to say, really. The music is pleasant to listen to.The graphics are passable; for a game made in 2015, they’re nothing to write home about. I tried out numerous racetracks and skill tests, but they’re all slight variations on the same landscape of ocean and mountains, with the occasional runway or aircraft carrier thrown in.

Don’t get me wrong, I’m sure I would like this game a lot more if I knew more about the intricacies of plane construction and could piece together my own fan creations. It is clear that the studio behind SimplePlanes put a lot of effort into writing the tutorials and making the crafting system both realistic and usable. Building unique aircraft seems to be the stand out strength of this game. Just from what I can understand of everything else, it’s only average.

If you enjoy putting together model planes, then SimplePlanes is for you. The build mode presents you with seemingly endless possibilities, or you can sample from vehicles the community has created. When it comes to the simulation aspect of this aircraft simulator, it brings nothing new to the table.

Sarah Marchant is an office admin for a nerdy t-shirt company. She has a soft spot for indie games, a passion for story-driven titles, and a weakness for cooking games and anything with zombies.
Related Articles: SimplePlanes
Share
Tweet
Share
Submit