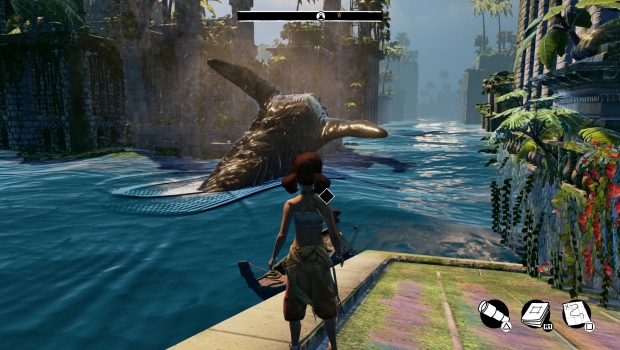 Failure tends to be a core principle of gaming. Whether you’re running a level, fighting a mob, or tackling a mission, you must succeed, or try, try again. Submerged does away with the pressures of dying or failing, and instead lets you loose in a waterlogged playground, content to let you explore to your heart’s extent. No fail states, just beautiful vistas and crashing waves.

Submerged is the story of Miku, a girl whose younger brother has been badly injured. Traveling in a boat through a city flooded to biblical proportions, you must raid the tops of skyscrapers to find the supplies and rations to heal your brother.

Though humans are absent, much of the wildlife has adapted to this strange world.

The story is intentionally ambiguous, told through tiny etchings in Miku’s journal. As you find the ten supply stashes littered around the city, you’ll learn more of Miku and her brother’s background, why they’re traveling alone, and why the brother is injured so badly. While you progress through their history, you’ll also see changes in the present. Plant life has sprung up everywhere, from long vines stretching along roofs and columns to luminescent algae lighting up the waves at night. Miku’s prolonged contact with the plant life is necessary, but soon starts to affect her; mysterious figures called Remnants observe her from a distance, and as she continues to climb the plant life of the ruined city, her skin begins to become grey and infected like theirs.

This dual tale, told in past and present, is touching and especially spoke to the older sibling in me. It’s story of sacrificing everything for a loved one, a family torn apart by a gradual chain of events, and the care shown in Miku’s steadfast care of her brother. My only issue was that while impactful, it was also a little short, and fairly straightforward – find the stash, climb to it, a cutscene plays and then you’re dropped back at your home base, ready to start the loop again.

As you sail through the city, you’ll maneuver your boat through a number of archways and expanses of sea looking for the tattered red parachutes that mark buildings with supplies. The motorized boat is fairly easy to control, though it doesn’t exactly turn on a dime, and sometimes oddly clips through buildings or reefs. You can scavenge wreckage of other ships to upgrade yours, but that just increases your boost, an ability that seems superfluous given there’s no time constraints to reach supply stashes.

Massive buildings loom on the horizon, beckoning you to explore.

Seeking out buildings can go a bit faster thanks to the telescope, which can automatically mark waypoints on your map for you when you spot certain items or locations with it, but I found it to be a toss-up whether it would notice something or not. The telescope worked well enough for spotting supplies from the top of large buildings, but even when I could clearly see a secret document shining through the lens, the game wouldn’t register it on my map. In contrast, sometimes the telescope picked up items I couldn’t even see on screen, miles away and unclear on what they even were until it marked them as upgrade, secret or supplies.

Visuals can get a bit murky against walls, or when the sun sets, but it never hinders gameplay.

Once you’ve spotted a location and you reach a building you can climb, Miku will dock the boat and grab onto an initial foothold. Free climbing the sides of the buildings is the meat of the gameplay, and much like the Assassin’s Creed series, Miku can clamber between ledges, pipes, and rocky outcroppings with ease. While only ten buildings have supplies at the top, others may hold documents that detail the history of the city, told in the same basic drawings as the main story.

The setup of the story is dire, with the brother’s condition constantly fluctuating, and the only reprieve resting atop massive skyscrapers, with only small ledges and vines to cling to as you climb. The lack of any fail state, though, leads to a strange dissonance between narrative and gameplay. There is no sense of urgency, and you’re free to move the plot forward at your own pace. It’s freeing in some ways, but also strange that you can spend hours and hours climbing a building looking for the last document, while your little brother is withering away back at your makeshift camp.

It’s because of that slow pace, though, that Submerged is allowed to breathe without constraint, and in the moments where you can simply climb a building and admire the view for pleasure, without fear of a timer running out, you’re allowed to take in and admire the view that much more. The city is beautiful, and the weather and day / night cycles create poignant vistas to get lost in. Storms roll through, raising waves up over your head and crashing rain bearing down on you as you leap from ledge to ledge. Beautiful sunrises come up over the waves, reflecting orange warmth off the water. At night, the infectious algae glows soft blue hues, almost ethereal and hauntingly soothing.

The weather and time of day changes dynamically, but always amazes.

The soundtrack, from BAFTA award-winning composer Jeff Van Dyck,  is also wonderful, opening with one of the strongest and most captivating tracks, and using punctuated piano keys and slowly building crescendos to build the mood of each moment. It’s no surprise that ex-2k developers who cut their teeth on titles like the original Bioshock have nailed this aquatic dystopian atmosphere so well, but Submerged goes above and beyond the call, and creates an interactive portrait just begging to be dove into head-first.

Submerged may not have an epic narrative arc or intense moments of action, but it never tries to be a blockbuster in the first place either. While my run of the main story clocked in at just under two hours, they were two hours that had me captivated. I would get lost in finding new heights and landmarks, sailing alongside whales and watching the weather slowly roll in, excited to see how the world changed and reacted without regard for my presence.

Those who want mission structure, complex mechanics and intricate systemic depth won’t find that here. Submerged is a game about your personal experience interacting with the world, choosing to act within it as you see fit and understand as much or as little as you want about it. It walks the thin line of interactivity, but in doing so, creates a highly memorable feeling that will be sure to hook you in for the short time you spend with it.

Submerged is a short but impactful experience, crafting sound and sight together to create something unique and different from the mold. It won’t keep you coming back for days and weeks, but in its runtime it stands out as one of the most intimate and interesting interactive set pieces I’ve played this year.