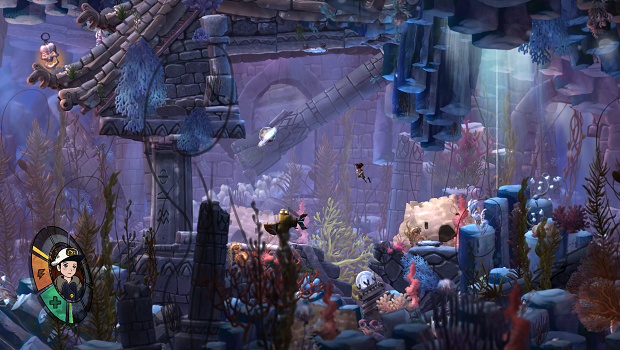 I’ll come right out and say it, I wasn’t expecting a great deal from Song of the Deep. Sure, I was hopeful, especially coming from a polished studio like Insomniac Games (see Ratchet and Clank), but I was worried it might not draw me in and hold my attention. I was wrong.

Song of the Deep is the story of a young girl named Merryn and her quest to rescue her father. Each day Merryn waits upon a cliff for her father, a fisherman by trade and storyteller by night, to return. One day, however, her father does not return, and after waiting all night and throughout the next day, Merryn decides to set off in search of him. Possessing the resourcefulness that only the daughter of a career mariner would have, and fueled by love for her father, she hastily builds herself a submarine out of salvaged scrap and plunges into the mysterious depths after him. It is there that she finds out her father’s stories of vast, ancient underwater cities, undersea monsters and treasure, may not be stories at all.

Song of the Deep, both in narration and plot, comes off like a children’s story. The calming tones of the narrator’s charming Irish accent, the enchanting soundtrack, and the cutscene illustrations served to whisk me away from daily drudgery and transport me to an underwater world full of wonder and beauty. Insomniac has done a masterful job creating such a unique and immersive environment, allowing for the relatively simple tale of a girl’s love and heroism to feel greater, deeper, and more captivating than it might without. Song of the Deep’s ability to enthrall, to give meaning, is its biggest strength, lifting the game to a higher level than others in its genre.

At first, cruising around in Merryn’s homebrew submersible is a bit clumsy. This could be due to using a mouse and keyboard, but more likely it was a purposeful attempt to simulate the awkward irresponsiveness and delay of guiding a craft in water. As my ability to navigate without accidentally crashing into things increased, I started to explore, wondering off in search of hidden riches or secret areas, and very quickly, I grew frustrated. There were areas I could clearly see but that I couldn’t access due to impenetrable walls, impassable tunnels, and the like. Typically, in action and exploration games such as this, there’s a workaround, whether it be solving a puzzle or some fancy maneuvering, but Song of the Deep took a different approach. In this game, as you progress further, you gain various abilities that allow you to access those previously unreachable areas, which then require significant backtracking to arrive at. This dynamic occurs throughout the game and eventually, I gave up and moved on, too disinterested to care anymore.

Despite this, I enjoyed my time progressing through the shipwrecks, ancient cities and glowkelp forests. From beginning to end, the combat felt easy and I enjoyed smashing through groups of hostile sea creatures with my sub’s claw or its compliment of ancient torpedoes. On occasion, however, I did find that the camera did a poor job of following me, and there were times when my submarine remained off-screen for too long. Still, none of the fights, including the few bosses, felt unfair or impossible, and for me, they were just challenging enough.

Song of the Deep isn’t just about wreck diving and wreaking havoc on the undersea population though; Merryn must also solve puzzles to find her father. The puzzles were well thought out and intuitive, but the solutions to many of them depended on Merryn reflecting light beams in certain directions, at specific objects, and often times the controls for these light beams were far too sensitive. Additionally, I was not a fan of how Insomniac Games decided to leave nearly all of the puzzles for the last portion of the game, where the puzzles then came one after another, in an unwelcome and frustrating deluge.

In the grand scheme of things, Song of the Deep gave me a few hours of unadulterated (see what I did there?) fun, exploration and great visuals. The few minor issues it has do not detract from its narrative, but do tend hamper the overall experience a bit. If you want to feel like a kid again, if only for a few hours, give this one a look.

Song of the Deep

Enchanting and charming, Song of the Deep is a children’s-fairy-tale-turned-video-game that’s full of wonder and vibrant beauty. The gameplay is both solid and enjoyable, but not without hiccups and hindrances.